BEIJING -- The anti-corruption campaign led by China's President Xi Jinping is starting to turn up major results. It netted 66 central and local government officials in 2014 alone.

Ling Jihua, a former top aide to Xi's predecessor Hu Jintao, was placed under investigation and removed from his position as head of the United Front Work Department in the Communist Party of China at the end of last year. And now, anti-corruption investigations into Ling's close associates are gaining momentum. 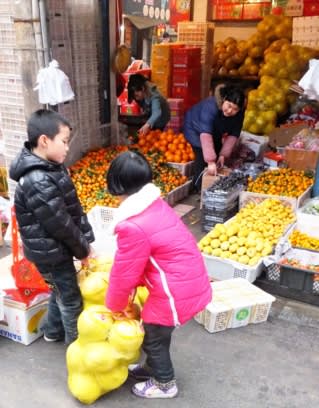 Chinese consumers shop at a fruit and vegetable store in Hunan Province.

In his televised 2015 New Year address, Xi pledged to "punish every corrupt official" and "root out corruption."

The president might be using the campaign to reinforce his power, as fair economic activities are impossible in a society where nothing can be done without lavishing entertainment on officials and gift-giving. Despite the anti-corruption campaign, public distrust in the government seems to be on the rise.

Xi therefore is right in raising the banner of the fight against corruption. But meanwhile, there are new concerns for the Chinese economy. With economic activity continuing to slow, business owners outside big cities are following one another in the search for somewhere new.

The rate of inflation, which represents the temperature of an economy, dropped to a five-year low of 2.0% in 2014, while wholesale prices have kept falling year-on-year for nearly three successive years. And the margin of decline in wholesale prices expanded for the fifth consecutive month through last December.

Ironically, the low rate of inflation is enabling Xi to push ahead with his anti-corruption crusade.

If a simple analysis is permitted, high inflation, along with corruption, toppled past regimes when the poverty stricken public sought to overthrow them. The Kuomintang, which was driven out of China by the Communist Party as a result of their civil war, lost public support because of corrupt officials and the hyperinflation caused by excessive money printing.

The Communist Party of China remembers that inflation was behind the Tiananmen Square incident of 1989. "There was a kind of panic," recalled a 75-year-old former junior high school teacher in Sichuan Province. Prices began to rise sharply in 1988, he said. For example, pork prices often jumped around 50% in one month.

People stockpiled towels and other articles for daily use, the former school teacher added. He bought three kilograms of sugar on his way home from work.

Zhao Ziyang, general secretary of the CPC at that time, who died on Jan. 17, 2005, removed price controls on pork, sugar and other items as part of reform. The decision was endorsed by Deng Xiaoping, China's then de facto leader.

But prices immediately soared amid supply shortages, prompting consumers to stock up on daily necessities. To capitalize on gaps between government-controlled and market prices, many officials used their positions to buy steel products and other items in large quantities and raised prices before selling them. The public harshly denounced them as "bureaucrat brocker."

It should be remembered that social discontent about corruption and inflation was one reason for the Tiananmen Square incident.

Politically, China is now in a lukewarm situation brought about by low inflation. But residential land in Beijing was sold at the highest ever auction price early this year despite persistent falls in housing prices. High-rise condominiums in big cities remain beyond reach for the general public. If China's economic slowdown continues, it will be more difficult to narrow the huge income gap.