Thousands tour building where nation's founding father was gunned down The cabinet committee room where Gen. Aung San and his colleagues were assassinated in 1947. (Photo by Fiona MacGregor)

YANGON -- "The place has been dead for so long. It is great to see it alive again," said Hnin Yee Htun as she watched the growing queue of thousands that had been snaking its way around Myanmar's most historic secular building since 6 a.m. on July 19 -- known as Martyrs' Day.

If one site represents the fall and rise -- and fall and rise again -- of Myanmar's political hopes, it is the Victorian-era, red-brick Secretariat building, also known as the Ministers' Office, which dates back to the last decade of the 19th century and sits amid 6 hectares of grounds in the center of the former capital, Yangon. The Secretariat building, once the center of British Colonial rule. (Photo by Fiona MacGregor)

Once the headquarters of British colonial power, and later the administrative center of independent Burma, it was here, 70 years ago, that Gen. Aung San, the 32-year-old who had led the country to independence, was gunned down, along with eight of his associates, by political rivals.

Hnin Yee Htun, who runs a bar opposite the historic site named Father's Office -- after "Father of the Nation" Aung San -- noted the emotional build-up to the day, hearing her customers discuss the significance of the anniversary.

The assassination of the charismatic figure ended hopes of unity between Burma's divided ethnic groups, and plunged the country into political chaos, and then into a civil war that has claimed countless lives and continues to this day. A group in traditional Karen ethnic dress in the grounds of the Secretariat building. (Photo by Fiona MacGregor)

"If Aung San had lived our country would be very different. Maybe for good, maybe for bad, I don't know, but it would have changed things," said Htay Lwin, Yangon's public health director, who was among those visiting the Secretariat for the first time.

Following a military coup in 1962, public access to the site was severely restricted. Then in 2005 the generals moved their headquarters to the new capital in Naypyitaw and the building was abandoned, its imposing form slowly disappearing from view as climbing plants overran the iron fences around it. Meanwhile, the country became an international pariah under brutal junta rule.

But in recent years the country began its transition, first under a reformist military government and, since April 2016, under the democratically elected administration led by the late general's daughter, Nobel Laureate Aung San Suu Kyi. At the same time, the building slowly began to reemerge. The weeds were cut back, a restoration project launched, and on Martyrs' Day 2014, the public were admitted for a single day to the grounds and parts of the building for the first time in many years.

This year the site opened to the public for three days and, for the first time, visitors were allowed to view the cabinet committee room where four masked gunmen burst in on that fatal day in 1947. The original furnishings, on loan from the National Museum, were installed for the anniversary, with name cards on the table where each man had been sitting at the time of the murders.

It was a somber sight and provoked mixed emotions in visitors as they thought about the past -- but also about their country's still-uncertain political future.

As he walked round the Secretariat compound, Hlay Maung recalled his family's reaction when they heard the news of Aung San's death all these years ago. "I was six years old. Everyone went very quiet. Then they started crying," the retired Yangon merchant said.

"I came today because I wanted to see the place where our leaders passed, but I feel sad. My main concern is our [new] leaders' security. I don't want another assassination."

His fears are not unfounded. In January, Ko Ni, a high-profile lawyer for the ruling National League of Democracy party and architect of proposed changes that could loosen the military's constitutionally-enshrined power, was shot dead at Yangon Airport. It was a frightening reminder for most citizens of just how deadly politics in Myanmar can still be even far from the front lines.

Soldiers and bomb squad officers were among the large security presence in and around the building this Martyrs' Day as the throngs of visitors made their way through the building where parliamentarians once sat, past a display of children's artwork, before filing along tiled corridors to the room where the assassination took place. 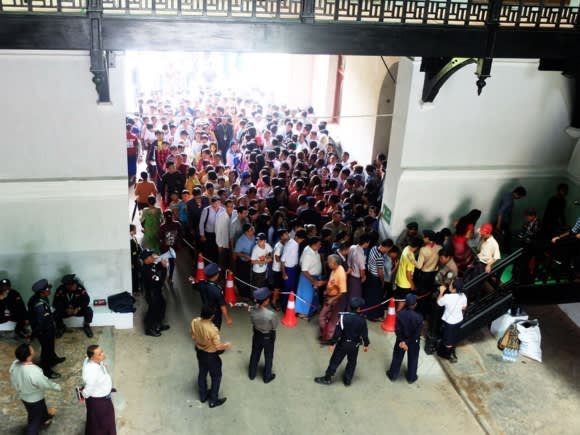 Visitors queue inside the Secretariat building on July 19. (Photo by Fiona MacGregor)​

Most of those present appeared relaxed and happy to be there. Among them May Suun Myat Chit, 25, who had made the journey to the historic site in her wheelchair with her uncle Thet Phay Oo and other family members.

"We came to remember our martyrs so it feels very sad, but we're also glad," said Thet Phay Oo, adding that the opportunity to visit the Secretariat provided optimism, despite the current political climate. "Our family all like our national hero Aung San Suu Kyi. Things have not got much better [under the new government], but we still have to hope."

Yet relations between the military and Suu Kyi are clearly strained. Many in the country remain fiercely loyal to Aung San's daughter, but others inside and outside Myanmar have expressed growing concern about her lack of public leadership in the face of a struggling economy and continued rights abuses.

If the Secretariat symbolizes Myanmar's past, it also stands as a metaphor for the country's ongoing struggle to free itself from the stranglehold of the generals and their business associates.

There is clearly a concerted effort to ensure the building's cultural heritage is preserved with sensitivity. Independent conservation body the Yangon Heritage Trust, local government, the Yangon City Development Committee, and international consultants are all involved in overseeing a conservation management plan for the site. Vinod Daniel, a former vice-chairman of the International Council of Museums Committee for Conservation, is among those advising.

Graham Stewart, Myanmar managing director of international public relations firm Bell Pottinger, which represents the site's conservation group, said a museum would form the center of "cultural space" to be developed there, including the preservation of the cabinet committee room.

But the financing of the project and plans for commercial ventures on the site remain opaque.

In 2012 the former military-backed government awarded the lease on the site, reported in local media to be for 30 years, to Anawmar Art Group, a company whose directors include relatives of Lt. Gen. Tun Kyi, a former minister of commerce who lost his office in 1997 amid corruption allegations.

Stewart said the restoration would cost more than $50 million, but any questions about how it would be funded, or by whom, would have to be directed to Anawmar Art Group who would not be free to speak until after Martyrs' Day.

However, in a July interview in Myanmar online publication Irrawaddy, Anawmar director So Thwin Tun, a grandson of Lt. Gen. Tun Kyi, was quoted as saying "some commercial ventures on the site" would be necessary to cover the costs of restoring and maintaining the building.

What form those will take is one of the city's great development unknowns.

At 10.37 a.m., the time when the gunman opened fire back in 1947, those queuing to enter the Secretariat bowed their heads in silence and vehicles came to a halt before blasting their horns in an ear-splitting, minute-long cacophony marking murdered dreams and fragile new hopes.

On the balcony of a rundown colonial apartment above the Father's Office bar, an elderly man appeared with his hands together in prayer as he faced out across the blaring cars towards the Secretariat opposite. A man prays on his balcony opposite the Secretariat building on July 19. (Photo by Fiona MacGregor)

"The family has lived there for 50 years. What changes he must have seen from that window," said Hnin Yee Htun. But the bigger question surely on everyone's mind was: What changes are yet to come?