Young South Korean men turn against Moon ahead of 2022 election 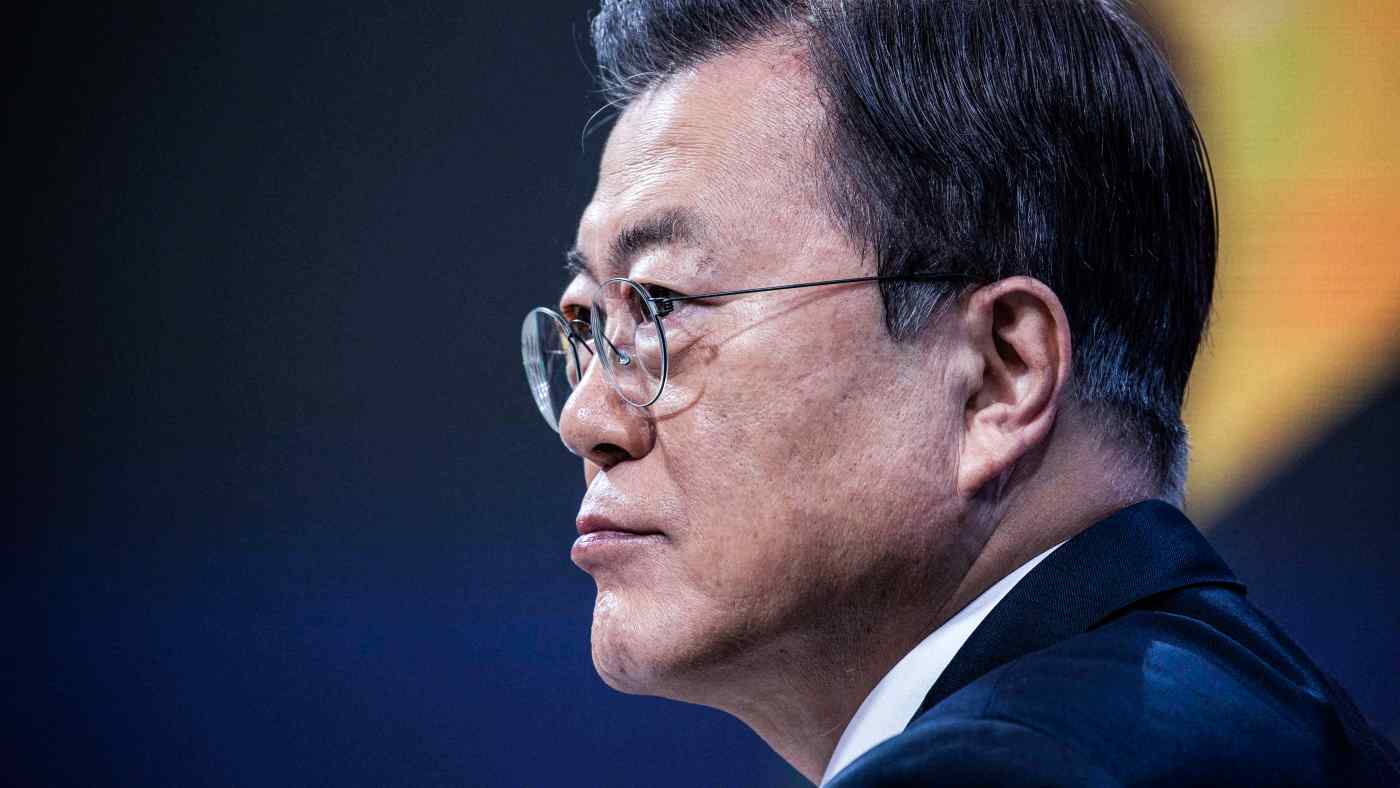 SEOUL -- Jeon Yong-gi has an idea he thinks might help revive his political party's flagging fortunes.

A 29-year-old lawmaker of the ruling Democratic Party, Jeon recently argued in favor of reinstituting South Korea's military points system, whereby men who complete their mandatory term of service are given a leg up when applying for public sector jobs.

South Korea maintains a large military to deter aggression from North Korea, and the system was implemented in 1961 to recognize the unpaid efforts of men who serve in the armed forces, usually in their early twenties -- a time when most would rather be earning money or preparing for their careers.

Jeon, who did not respond to requests for an interview for this article, maintains that such men deserve more substantive recognition for their sacrifice.

The points system was discontinued in 1999 after it was deemed unconstitutional on the basis that it discriminated against women and men with disabilities who could not join the military.

"Even in 1999... the court recognized that men were not being properly compensated," he wrote on April 15 on his Facebook page. "As a man in his 20s myself, I will make my best effort to accomplish this in the 21st National Assembly."

On Wednesday, Lee Nak-yon, a ruling party heavyweight and former prime minister, suggested that reviving the points system may be taking it too far, but suggested paying conscripted men 30 million won (about $26,650) after their service.

These ideas are more commonly associated with conservative South Korean politicians. The ruling party's sudden advocacy for young men -- many of whom contend that military service is unfair because women have no such obligation -- has been interpreted as a thinly veiled attempt to win back young male voters ahead of next year's presidential election.

In April, South Korea held by-elections in the country's two largest cities, with the Democratic Party losing both in landslides. Poll data showed that young people, in particular young men, voted for the right-wing opposition in uncommonly large numbers.

As left-leaning President Moon Jae-in enters his fifth and final year in office, he and his party are grappling with souring public sentiment related to the widespread perception that Moon has not delivered on promises to revive the flagging economy. At the same time, a number of high-ranking officials in his administration have had to step down after being implicated in corruption scandals that have tainted the government's image as crusaders for fairness and transparency.

In the last week of April, Moon's approval rating tumbled to 29%, the lowest recorded since he took office in May 2017, according to pollster Gallup. As reason for their negative assessment of Moon's performance, 28% cited displeasure with the administration's real estate policies, followed by 17% who disapproved of his handling of the coronavirus pandemic.

"The shift among young Koreans, particularly males in their twenties, has more to do with anti-Moon sentiment than any strong appeal from the opposition," Andrew Yeo, professor of politics and director of Asian Studies at The Catholic University of America in Washington, told Nikkei Asia.

"Some of Moon's policy high notes and early achievements such as the 2018 Olympics, the inter-Korea summit, and minimum wage hikes which might have appealed to the younger generation have been overshadowed by corruption scandals, and unintended policy consequences and failures," Yeo said.

South Korea's economy grew 1.6% in this year's first quarter, a surprisingly strong performance driven mostly by exports. While certain industries, such as semiconductors, have thrived, large swathes of the population are still stuck in economic doldrums. The number of people seeking unemployment benefits hit an all-time high in March.

"As global demand increased for contactless products due to coronavirus, that has driven a sustained recovery in IT products and facility investment," the Bank of Korea said in a research note published in April.

"However, concerns are growing over whether the current recovery is overly dependent on certain industries, such as semiconductors, and whether that is desirable over the long term."

The report showed that semiconductors accounted for 18% of South Korean exports in 2019, up from 9% in 2009. Over that same time, South Korea lost share in the global markets for LCD screens, mobile phones and autos, the report showed. The ruling party's sudden advocacy for young men has been interpreted as a thinly veiled attempt to win back young male voters ahead of next year's presidential election.   © EPA/Jiji

Adding to the public discontent is the perception that the government dragged its feet in securing sufficient supplies of vaccines, causing delays in getting the population inoculated and lifting the social distancing measures that have ravaged the economy's service sector.

"Moon's administration was slow on procurement contracts because they were self satisfied with initial mitigation efforts," Mason Richey, a professor of politics in the Graduate School of International and Area Studies, Hankuk University of Foreign Studies in Seoul, told Nikkei.

"So now they're behind peer countries in deliveries, and many people are rightly worried that potential herd immunity will come later than it should. This is both a public health risk and bad for the economy," Richey said.

While South Korea has coped with the pandemic, in terms of both public health and the economy, there are growing signs that the more than year-old fight against the virus has taken a heavy toll on the country. According to the National Health Insurance Service, more than one million people sought treatment for depression in 2020, double the number recorded three years earlier.

"Due to the changes caused by this prolonged coronavirus crisis, many people are suffering from burnout, which goes beyond depression and becomes helplessness, where people feel like there's nothing they can do on their own, that hard work won't change anything," Kwon Jun-soo, a neuropsychiatrist at Seoul National University Hospital, wrote in a recent column.

Kwon tied this rising incidence of depression to the misdeeds of South Korea's elite, and an increasingly winner-take-all social culture. "The accumulation of wealth through lies and pretensions, the maintenance of vested interests through inside information, are the dark side of a society excessively focused on performance," Kwon wrote.

While Moon's approval rating is far below the popularity he enjoyed early in his term, he nevertheless has retained more support than South Korean presidents typically have at this stage in their tenure.

The poll released in late April by Gallup showed that in the fourth quarter of Moon's fourth year in office, 38% of South Koreans approved of his performance, the most of any of the country's democratically elected presidents and well ahead of his predecessor, Park Geun-hye, who had an approval rating of 12%.

South Korean presidents serve in single five-year terms, meaning Moon is not eligible to run in the election next March. A RealMeter poll released in early May showed Yoon Seok-youl, a former chief prosecutor who resigned after a monthslong public standoff over the administration's efforts to pass reforms that would curtail prosecutors' power, leading all prospective candidates with 32% of support.

Next was Lee Jae-myung, an outspoken member of the ruling party who is currently governor of Gyeonggi Province, which surrounds Seoul.

The Democrats face an uphill struggle to improve their standing before the big vote next year.

"The ruling party needs to overcome frequent scandals, and enforce greater party and personal discipline among its members. They have also further polarized the electorate by dismissing not only the opposition's accusations of foul play, but also public criticism," said Yeo.

"Showing more humility and less hubris while engaging the opposition in real policy debates, rather than categorically rejecting their criticism, might help moving forward."