US holds memorials on 20th anniversary of 9/11 attacks NEW YORK -- Twenty years after the Sept. 11 terrorist attacks on the U.S., memorial services and moments of silence were held where the World Trade Center once stood in New York City and other locations on Saturday.

At the ceremony in New York, moments of silence were observed at 8:46 a.m. and 9:03 a.m. when al-Qaida-hijacked American Airlines flights 11 and 175 hit the twin towers, respectively. The names of almost 3,000 people who died were read out.

A moment of silence was also held at 9:59 a.m. when the south tower of the World Trade Center collapsed as well as at 10:28 a.m. to mark when the adjacent north tower fell.

The New York Police Department pipes and drums band played "Hard Times Come Again No More," a  song that dates from the 1850s. Singer and songwriter Bruce Springsteen performed a song at the event as well.

Biden did not speak at the event but released a video statement on Friday, saying, "We have learned that unity is the one thing that can never be broken."

"To me, that's the central lesson of Sept. 11, is that at our most vulnerable, in the push and pull of all that makes us human, and the battle for the soul of America, unity is our greatest strength," he said.

"Unity doesn't mean we have to believe the same thing. We must have a fundamental respect and faith in each other, and in this nation," he added. Family members of 9/11 victims pay at New York Fire Department's Ten House to mark the 20th anniversary of the attacks.

A memorial service was held in Shanksville, Pennsylvania, where United Airlines Flight 93 crashed after passengers overpowered the terrorists who had took over the aircraft headed for Washington. A moment of silence was held there at 10:03 a.m. Former President George W. Bush, who was in office during the attacks, read a statement in a rare public appearance at the ceremony in Shanksville.

"Twenty years ago we all found in different ways, in different places, but all at the same moment that our lives would be changed forever. The world was loud with carnage and sirens and then quiet with missing voices that would never be heard again," Bush said.

"These lives remain precious to our country and infinitely precious to many of you. Today we remember your loss and we share your sorrow," he said. "On America's day of trial and grief, I saw millions of people instinctively grab for a neighbor's hand and rally to the cause of one another. That is the America I know." 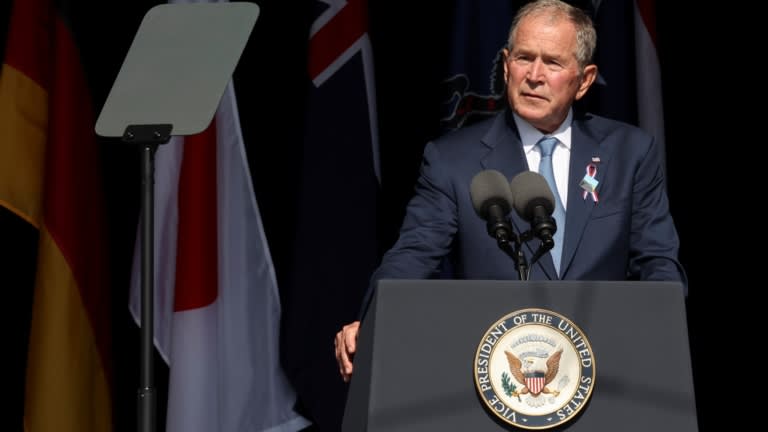 "The dangers to our country not only from not across borders, but also from within," Bush added. "There is little cultural overlap between violent extremist abroad and violent extremists at home, but in their disdain for pluralism, in their disregard for human life, in their determination to defile national symbols, they are children of the same foul spirit and it is our continuing duty to confront them."

After attending the memorial in New York, Biden traveled to the Pennsylvania site, where he laid a wreath with First Lady Jill Biden.

“The core of who we are is not divided,” Biden said Saturday during a visit to a fire station after the Shanksville ceremony.

In Washington, a moment of silence was held at 9:37 a.m. to remember those who died when American Airlines Flight 77 crashed into the Pentagon.

Biden finished his day of commemorations at the Pentagon in a wreath-laying ceremony. 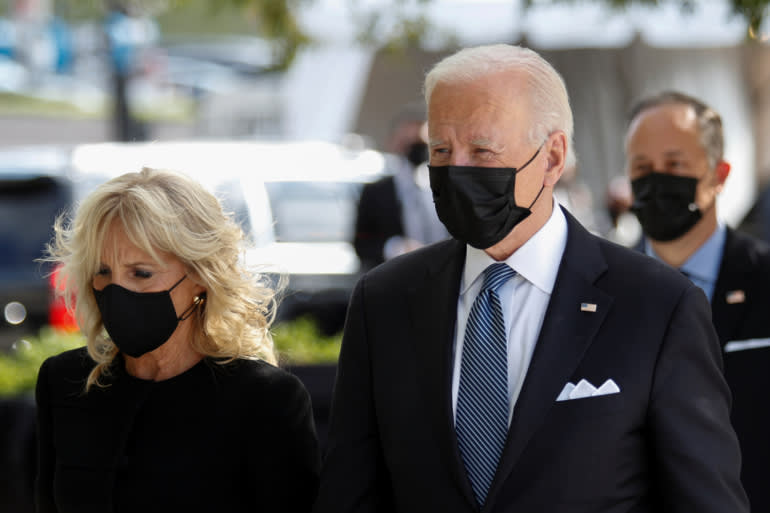 On Friday, memorial services were held at financial institutions which had employees killed in the attacks. Cantor Fitzgerald, a securities firm that lost 658 employees, held a charity event to support the families of the dead.

Insurer Marsh & McLennan, which lost 358 employees, a glass memorial has been set up at its headquarters with the names and signatures of the victims engraved on it.

The terrorist attacks were masterminded by al-Qaida, an Islamist terrorist organization led by Osama bin Laden who was killed by U.S. soldiers in Pakistan in 2011. The U.S. launched the Afghanistan War after the attacks as retaliation against the Taliban regime for harboring the group, becoming the longest war in American history. U.S. troops exited the country at the end of August, and the Taliban retook control of almost the entire country.