TAIPEI -- The emerging market for private 5G networks is giving key Apple suppliers a chance to diversify away from low-margin consumer electronics -- and break into a field long dominated by telecom equipment giants like Huawei Technologies.

Unlike public networks that are open to all users and usually require vast amounts of infrastructure, private 5G wireless networks are dedicated, local networks for use in a specific facility or location, such as a factory, hospital, logistics center, mine or farm.

Taiwanese players are particularly keen to seize this new opportunity.

Quanta Computer, a key maker of MacBooks, has partnered with Japan's Rakuten Mobile to build 5G networks, and has also secured contracts for 10 private network projects in Japan and Taiwan.

"The 5G era is just beginning and we see so many business opportunities opening up for us, including private 5G networks," said Mike Yang, president of Quanta's cloud-computing subsidiary QCT. "Our years of hardware and cloud-computing engineering capability will enable us to be an integrator in building 5G private networks for a wide range of users across industries."

The Taiwanese company has been involved in cloud-computing technologies for more than 10 years and began investing in 5G technologies four years ago.

Quanta compatriot Compal Electronics, a key iPad and Apple Watch assembler, said it has high expectations for entering the 5G private network business and has formed a 300-member team to tap into the market that was previously closed to electronics manufacturers like them. In late October, Compal announced that it would partner with Cisco to address enterprise needs for 5G networks.

Other key Apple and HP suppliers such as Inventec, Foxconn and Wistron are also eyeing the private 5G network market.

"When we look at the telecom equipment players, we see Chinese companies and we see European players, but we don't see American players. But that's a very important sector. The U.S. hopes to catch up in the 5G networking equipment sector, and that creates new business opportunities and chances for collaboration," Eric Peng, senior vice president of Compal, said. "There is not yet a clear winner in supplying the booming need of 5G private networks."

The slowdown in the consumer electronics market -- already a low-margin business -- has pushed suppliers to seek new, more lucrative businesses. A key reason that private 5G networks have emerged as an attractive option, however, is political.

The U.S. has been pushing its allies to keep Huawei out of their 5G networks, describing the Chinese company as a security risk and arguing that once its equipment is built into a network it would take years to strip it out.

As part of this push, Washington is embracing a concept known as open radio access network, or open RAN.

Radio access networks are made up of a variety of equipment and software that enable connectivity and data transmission between the two ends of a mobile network: user devices such as smartphones on the one hand, and the core network made up of base stations and other infrastructure on the other.

For 4G networks, telecom equipment builders like Huawei and Ericsson bundle their base stations with proprietary RAN equipment. The open RAN initiative, by contrast, aims to develop open-access standards for interoperability that will allow new and smaller players to build equipment for radio access networks. 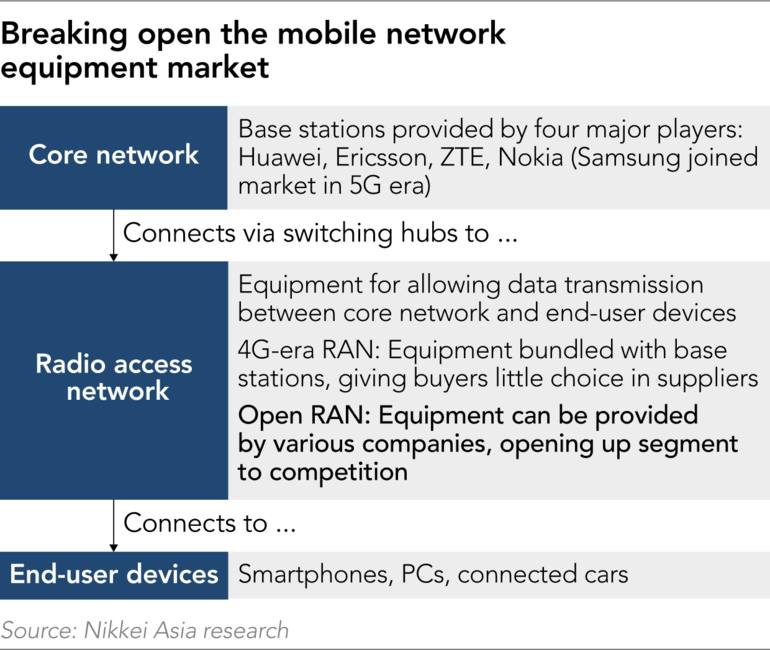 Geopolitics play a major role in the open RAN push. In May, the Open RAN Policy Coalition was formed to encourage the U.S. federal government to take an active role in facilitating advanced wireless technologies, including 5G. The coalition so far has attracted American, Japanese and South Korean companies looking to counter the rise of Chinese players in the emerging 5G wireless network market. Taiwan has since joined the coalition, too. Major American companies including Google, Microsoft, IBM, Cisco, Amazon's AWS and Facebook are members of the coalition.

"The U.S. pressure on many countries to ban Huawei and ZTE and promote open RAN is fueling the open RAN momentum. We clearly saw an acceleration during this year," Stephane Teral, chief analyst with LightCounting Market Research, told Nikkei Asia. "There is a strong open RAN momentum fueled by European service providers such as Orange and Vodafone. ... Orange in the Central Republic of Africa, Vodafone in Republic of Congo and in Mozambique; typically, those networks would have gone to Huawei and ZTE."

Leading telecom players have also added to the momentum. A few years ago, AT&T, China Mobile, Deutsche Telekom, NTT Docomo and Orange launched the O-RAN Alliance in hopes that the adoption of open RAN will open up the market and give them greater flexibility in choosing equipment suppliers. That, in turn, is expected to lead to lower infrastructure costs and more customized equipment.

The global market size for private 5G networks is forecast to hit 2.7 trillion yen ($25.8 billion) by 2025 and to grow fourfold to 10.8 trillion yen by 2030, according to an estimate by the Japan Electronics and Information Technology Industries Association, or JEITA.

"Carriers are betting on 5G private networks as they could see a return on their investments more quickly there than in public 5G networks, where they are still scrambling to find a sustainable business model," Chiu Shih-fang, a smartphone and networking analyst at the Taiwan Institute of Economic Research, told Nikkei Asia. "5G private network will be an area that could first deploy massively using the new open RAN infrastructure."

LightCounting's Teral said private 5G wireless networks can open a new window of opportunity for carriers and may also prolong the investment cycle, but there are still questions to be answered.

"The interest [in building 5G private networks] is enormous across the board in many verticals. But the tricky part is: Who owns and operates the private wireless network? The carrier, the vendor or the enterprise itself?" Teral said. "It is an unchartered territory that, due to the numbers of verticals, requires a lot of resources."