Huawei aims to be next chip powerhouse while MediaTek shifts 3,000 workers to 5G

BARCELONA, Spain -- Asian chipmakers are gearing up to challenge Qualcomm's dominance in 5G modem chips as the latest mobile technology finds its way into everything from smartphones to self-driving cars.

Qualcomm, the world's No. 1 mobile chip designer, is the sole provider of 5G modem chips for the first 5G smartphones rolled out by Xiaomi, LG Electronics and ZTE. It also provides the chips, though not exclusively, for Samsung Electronics and others.

But players like Huawei Technologies of China, and Taiwan's MediaTek, see an opportunity to snatch market share in the coming months as new 5G-enabled devices are rolled out, according to industry sources and analysts.

MediaTek says it is devoting just under a fifth of its workforce to 5G development, with plans to launch an advanced modem by the end of the year. Huawei, meanwhile, has invested heavily in developing a 5G modem that it claims is already more advanced than that of its U.S. rival. Beijing-backed Unisoc has also unveiled its own 5G modem chip, although it has not yet specified when it will be available.

Asia's chipmakers are seeking to take advantage of a sharp rise in the number of 5G enabled devices next year. The number of 5G-capable devices shipped, including phones, routers and hot spot devices, is expected to rise from fewer than 5 million in 2019 to more than 50 million in 2020, according to Bernstein Research. A number of smartphone makers have also announced plans to launch 5G enabled mobiles in the next 12 months.

Advanced modem chips are a key component for 5G telecommunication technology, which offers far faster data transfers with lower latency than previous generations. This will be critical for applications such as autonomous driving, augmented reality and AI computing. Currently, however, only a handful of companies in the world are capable of making 5G modems. 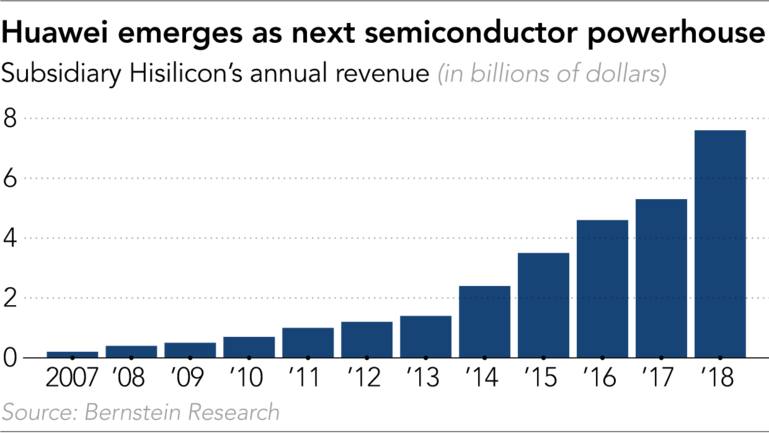 In addition to smartphones, modem chips are used in everything from routers, tablets and wearables to virtual reality headsets and connected vehicles.

"Our [Balong 5000] 5G modem can download at double of the speed of our competitor [Qualcomm's X50].... It's not the modem on a PowerPoint presentation. It's the modem available now," Richard Yu, CEO of Huawei's consumer business group, said at the recent Mobile World Congress in Barcelona. "We built the world's fastest 5G modem, and we also built the world's fastest 5G smartphone."

Huawei's push to build 5G modems is part of its broader ambition to become the world's next semiconductor powerhouse and to slash its reliance on foreign chipmakers. It already builds up to 60% of the Kirin mobile processors used in its own high-end smartphones, and it recently unveiled its Kunpeng processor for its server products. This follows the AI accelerator chips it rolled out last year for use in everything from wearables and handsets to cars and data centers.

"We believe Huawei's chip unit HiSilicon Technology is just one step behind Qualcomm and set to become the biggest Asian chip designer by revenue in 2019," said Mark Li, a veteran semiconductor analyst at Bernstein Research. "It's really the Chinese national champion in chip design. It's growing by leaps and bounds thanks to Huawei's smartphone business."

As the world's biggest telecom equipment builder, Huawei's advantage for 5G lies in that it can first test its own modem on its own base stations, said Eddie Han, an analyst at Market Intelligence & Consulting Institute. "That's saving time and likely gives its products better integration."

Many others are also looking to expand their footprints with 5G, which many expect will revive a global tech industry hard hit by a declining smartphone market. Among them is Qualcomm's longtime smaller rival, MediaTek. The Taiwanese company's 5G modem planned for the end of this year could be deployed in mobile devices on a mass scale in 2020, said President Joe Chen at a small media briefing at the MWC.

"We expect 5G smartphones will definitely take off and trigger consumers to replace its older model for a new 5G handset next year in 2020," Chen said. "That's a great growth opportunity for us, and we will integrate the 5G modem with mobile processor solutions and get in all ready early next year."

MediaTek supplies to Oppo, Vivo, Xiaomi, and most other major Chinese handset makers, as well as Amazon and Samsung for its entry-level phones. MediaTek CEO Rick Tsai said in late February that his company has assigned more than 3,000 staff members out of its 16,000 total to work on 5G-related technology.

Samsung Electronics has also developed its own 5G modem chips for some of its high-end devices in certain markets, including South Korea.

Asian suppliers will not be the only challengers, however. They will be up against Qualcomms's domestic competitor, Intel. The world's biggest PC and server processor chipmaker, is doubling down on 5G modem development. It recently unveiled the XMM 8160 5G modem during MWC.

Intel has benefited from a bitter legal battle between Apple and Qualcomm over licensing fees and now supplies the iPhone maker with modem chips. Market watchers expect Intel will continue to dominate modem chip orders for Apple's products this year and next.

Apple, meanwhile, is secretly working on its own 5G modem technologies to eventually reduce its reliance on external suppliers, according to industry sources familiar with the matter.

Qualcomm, however, is unfazed by the looming competition. "We don't think too much about what others are doing. From our perspective we want to make sure that we continue to innovate and have solutions in place which will allow the rapid deployment of 5G," said Durga Malladi, senior vice president of engineering and 5G general manager, told Nikkei. "Competition in any of the new generations of wireless technology is nothing new. The same thing happened at the beginning of 4G, and the same thing is happening in the beginning of 5G."

The American market leader is optimistic that as 5G enters commercialization, Qualcomm's 5G modems will be used not only in smartphones, but also in laptops, automobiles and industrial applications after 2020, Malladi added.