PHNOM PENH/HANOI -- The race to launch fifth-generation network services in Cambodia is heating up, with major telcos rolling out 5G base stations backed by Chinese tech vendors Huawei Technologies and ZTE and earmarking hundreds of millions of dollars in related investment.

Smart Axiata, part of the Malaysia-based Axiata Group, and Cellcard, a telco owned by Cambodian conglomerate Royal Group, are hoping to lead the region by going live with 5G commercial services before the end of the year.

Smart CEO Thomas Hundt said equipment for Smart's 5G project in the capital Phnom Penh was being set up and field tests were almost finished. In a recent interview with Nikkei, he said Smart will use next generation tech from Huawei, which also supplied the gear for its existing 4G network.

The company aims to kick off commercial 5G services once it receives government approval. "We would like to be the first country in ASEAN to launch 5G,” Hunts said.

He added Smart would invest $100 million in the 5G technology over the next three to five years. Smart Axiata CEO Thomas Hundt told Nikkei in an interview that the company will use next generation tech from Huawei. (Photo by Tomoya Onishi)

Cellcard CEO Ian Watson said the company's first phase included 500 5G base stations spread across Phnom Penh, Siem Reap and Sihanoukville. With those now in place, he said the service would be launched in December.

He said ZTE had been chosen for the initial rollout, which will see the number of base stations increased to 2,000 nationwide throughout next year.

He added the company -- which plans to invest about $200 million in 5G over the next 18 months -- would use Nokia for future 5G expansion in rural areas, but acknowledged the business case for the service outside urban areas was still weak.

"I think over the next three to five years we'll start getting a return on the investment," Watson said. "The problem is, if you don't do it, you're going to be left behind."

Cambodia's other major telco, Metfone, a subsidiary of Vietnam's Viettel, is reportedly partnering with state-owned Telecom Cambodia to trial 5G services with equipment from Huawei.

This is despite Viettel -- which did not respond to a request for comment by press time -- deciding not to work with Huawei for its planned 5G network in Vietnam.

TC, which runs fixed-line services, signed an agreement with Huawei in April to roll out a 5G network in 2020. The deal came amid intensifying scrutiny of the Chinese tech powerhouse's role in 5G networks around the world.

The U.S. government has called on friendly countries to keep Huawei out of their 5G infrastructure, citing concerns their technology could be used for spying by Beijing, claims the company has rejected. Japan and Australia have effectively moved to close out the Chinese company, and some European countries have shown caution over including it.

Hundt said Smart had looked into security concerns but found that "from [an] overall perspective including technological factors, support systems and costs" that "Huawei was the best choice."

Marc Einstein, chief analyst at Japan-based IT research and advisory company ITR, said Phnom Penh's increasingly close ties with Beijing was one aspect of Huawei's success in the country.

More importantly, however, the Chinese tech giant could supply equipment cheaper than European rivals, he said.

5G services are already available in parts of the U.S., South Korea and some European markets, with China's rollout in major cities to come as soon as this year. The networks are not expected to launch until next year at the earliest in many leading countries and most of Southeast Asia.

Though a slow starter in economic development among Southeast Asian countries, Cambodia aims to be first among its peers to adopt the ultrafast network technology in hopes of a digital boost.

Einstein said the early adoption by Cambodian telcos was a good sign, but it would take "several years" for the networks to be adopted by the majority of average consumers.

"It might be the first [commercial service in Southeast Asia], but in a few months it's not going to be the only one. It's notable, it's great for the country to have this kind of thing," he said, adding the technology would help the country "leapfrog" its poor fixed line services.

5G networks, which can transmit data up to 100 times faster than 4G, will reduce transmission lags to about one-tenth of what they are currently. 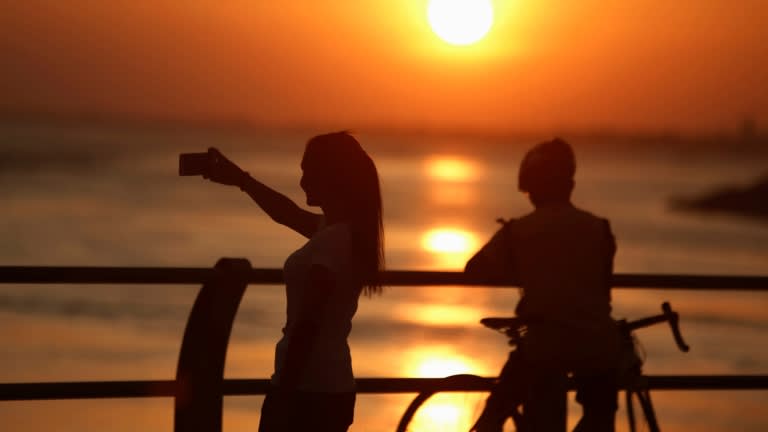 A woman uses her smartphone to take a selfie as the sun rises in Phnom Penh.   © Reuters

Hopes are high that these networks will power advances in such areas of the digital economy as artificial intelligence and connected devices for the so-called "internet of things." In Cambodia, the technology will be a "game changer" said Frost & Sullivan ITC analyst Sofea Zukarnain.

"To ensure a sustainable business case for 5G, good and strong connectivity is required. In Cambodia, there are only about 137,000 fiber optic connections (as of 2018), due to high cost of leased line, low takeup by home users and companies, and users prefer mobile internet," she said.

"Fiber is critical in the early stages of 5G as fiber is necessary to handle unlimited bandwidth levels, increased speeds with lower attenuation and is immune to electromagnetic interference."

Both Cellcard and Smart say they will continue investing in their 4G networks. According to a recent report by Open Signal, Smart's network has the greatest 4G availability -- providing a 4G signal more than 80% of the time -- but Cellcard and Metafone are gaining ground, at about 75% and 78%, respectively.

While Cambodia scored low on download speeds -- with operators scoring below 10 megabits per second -- its 4G availability performed well.

"Like many of its Southeast Asian peers, Cambodia seems to have focused its 4G efforts on expanding access to mobile broadband connections, rather than on raw throughput," the report read.

"Cambodia as a whole has achieved higher 4G availability than many European countries in our global analysis," it said.