A cargo ship at Mawan port in the city of Shenzhen. China Merchants Group has introduced remote-controlled cranes so their operators no longer have to climb to dangerous heights. (Photo by Yusuke Hinata)
YUSUKE HINATA, Nikkei staff writerNovember 29, 2020 05:35 JST | China
CopyCopied

GUANGZHOU -- The containers were stacked sky high atop a cargo ship docked at a port in Shenzhen, the city that has long served as an economic dynamo for China. Cranes whirred and whizzed, unloading the crates to trucks waiting on the ground but there were few workers to be seen among the bustle.

Not that long ago, unloading a ship of that size and scale would be an undertaking requiring a number of crew members, many of whom would have to risk dangerous situations to get the job done. But during a recent visit to Mawan port, there were only a handful of workers at the scene, mostly overseeing the tall task and securing the containers when necessary.

The port is an example of how operator China Merchants Group has been working to automate and mechanize more operations using ultrafast fifth-generation wireless technology. By developing innovative ways to run the port as efficiently as possible, the company aims to accelerate overseas expansion.

Cranes that unload ships at Mawan can now be operated remotely from a centralized command room, meaning operators no longer have to work at dangerous heights in sometimes sweltering heat. The port is also testing automated vehicles on the ground, which could reduce human error in sorting containers.

These systems have been running on a 5G network since June. "5G is the key to making smart ports a reality," said Lu Tianbao, who works for a China Merchants unit specializing in information technology.

"The goal is to spread the Mawan port model along Belt and Road countries," a source from the port said, referring to Beijing's infrastructure-building initiative along the historic Silk Road. China Merchants hopes its know-how developed at home could aid its bids for port projects across Asia and beyond. 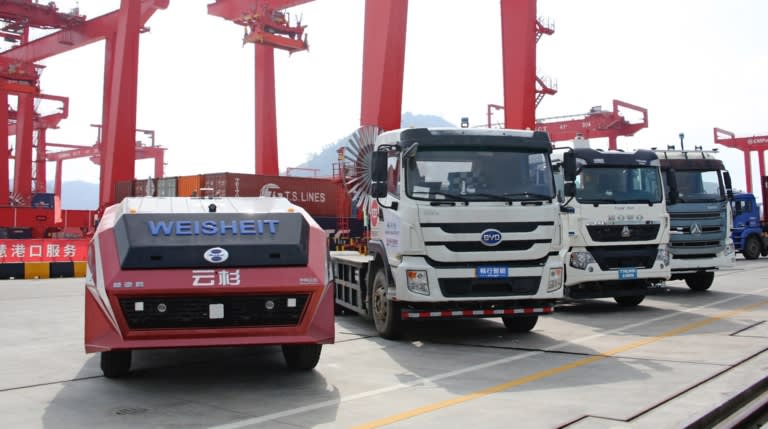 China Merchants Group is testing out self-driving vehicles to move containers through the Mawan port. (Photo by Yusuke Hinata)

The group has been rapidly expanding overseas over the past several years. It announced last year that it will take a stake in 10 port terminals owned by a French shipping company across Asia and Europe, and acquired port assets in Brazil and Australia in 2018. China Merchants Port Group, a core unit listed on the Shenzhen stock exchange, booked 12.1 billion yuan ($1.84 billion) in revenue in 2019, nearly 30% of which was generated abroad.

But overseas operations are more likely to be affected by diplomatic issues. For example, a dispute between China and another country could set China Merchants back in obtaining port assets in that country. Chinese infrastructure investments have also been criticized as debt traps -- an attempt to saddle target countries with unsustainable levels of debt to take control of their assets.

China Merchants is eager to bring something extra to the table to demonstrate that it is interested in cooperation, not control. Lu said the group is prepared to work with local equipment makers and tech companies to create a flexible arrangement. "Our system is compatible with a variety of equipment and software, and we can conduct tests at the Mawan port as well," he said.

The Mawan port was a gateway for cement and other construction materials to Shenzhen in the 1980s, contributing greatly to the city's development into one of China's business hubs and a vital link in the Belt and Road initiative. It is now playing a key role in China Merchants' overseas expansion as well.