US and Japan lose market share, as Huawei and ZTE bulk up

TOKYO -- Chinese companies account for 34% of worldwide applications for major patents related to 5G technology, putting it in a position to drive the development of new industries that use ultrafast-communication networks.

The latest wireless communication standard can handle huge volumes of data at high speed, and is crucial to the development of technologies such as autonomous driving systems. Whoever controls the most "standard essential patents," or SEPs, for 5G will likely come out on top in the race to develop a new generation of advanced industries.

As of March, China had filed for 34% of SEPs for 5G communication systems, an increase of more than 50% compared with its share of 4G patents, according to IPlytics, a German company that maintains a huge patent database. South Korea had a quarter of key 5G patents, while the share of filings by Japanese and U.S. entities fell compared with the 4G era.

The rise of China marks a clear change from when 3G and 4G were launched. Companies from the U.S. and Europe held the key SEPs at both stages, and Chinese companies had to pay large royalty fees to Western companies.

Royalties for SEPs are often determined through negotiations between patent holders and users. In the case of smartphones, 2% or so of the price of the product is the going rate. Companies with many SEPs sometimes conclude cross-licensing agreements that allow them to use competitors' technology free of charge, depending on the number of technologies and their importance. 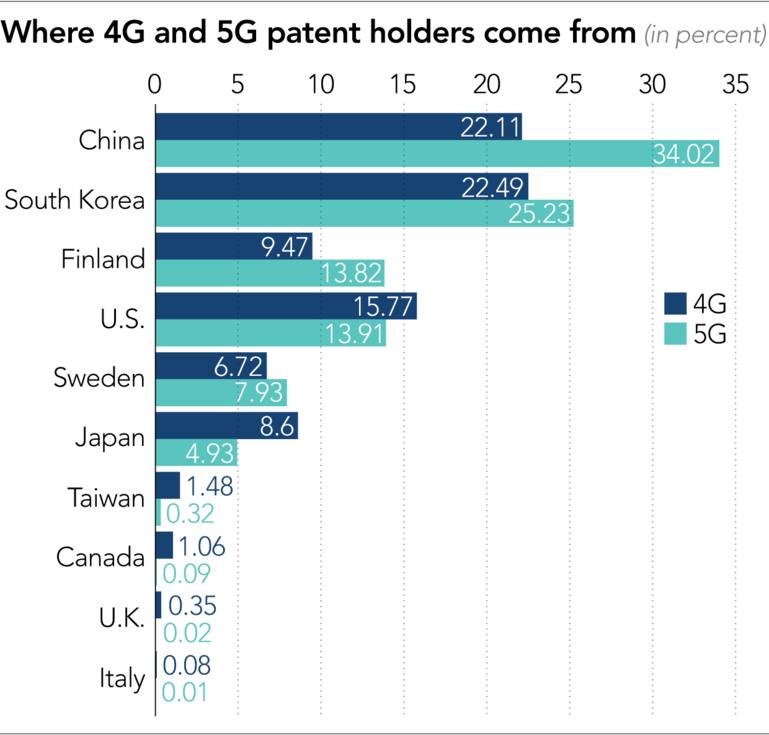 Commercial 5G service is expected to begin in the next year or so. Companies looking to build 5G base stations or to make 5G-capable handsets will have to pay royalties to the holders of the essential patents.

Huawei Technology had the largest share of filings for 5G-related SEPs, at 15%. Other top filers in China included ZTE and the China Academy of Telecommunications Technology, which ranked fifth and ninth, respectively.

The Chinese government is promoting 5G as part of "Made in China 2025," its ambitious plan to lead the world in next-generation technologies and industries. Among its goals is the development of highly automated factories that incorporate "internet of things" technology. To turn that vision into reality, 5G is essential.

Huawei and other Chinese companies began increasing their filings for 5G-related patents around 2016. The telecom equipment maker is reportedly spending $10 billion a year on research and development related to 5G base stations, much more than Sweden's Ericsson or Nokia of Finland, its main rivals. ZTE, a domestic competitor, has also increased its market share in base stations and other equipment. South Korea also makes a strong showing in applications for 5G SEPs. Most of this was due to Samsung Electronics and LG Electronics, which were No. 3 and No. 4 in terms of filings, according to IPlytics figures. U.S. entities accounted for 14% of filings for 5G patents, down from 16% for 4G. Japan's share of filings fell to 5% from 9%. Qualcomm, a leading U.S. manufacturer of smartphone chips, saw its share of filings fall, as did Japan's Fujitsu and Sony.

Companies with many SEPs can earn considerable royalty income, and make their base stations, smartphones and other equipmentmore competitive on price. In addition, countries with many 5G patent holders will be able to build advanced communications networks more cheaply and foster the growth of related industries.

The U.S. has shut Huawei out of its 5G market, citing national security concerns, and it is pressing its allies to follow suit. But because Huawei holds much of the intellectual property for 5G technology, it can earn royalties in the U.S. even if it cannot sell products there, according to IPlytics CEO Tim Pohlmann.

The spread of 4G technology fueled the growth of YouTube and other video-sharing services. The next-generation of wireless technology is expected to bring a new wave of products and services, in addition to the further enhancing smartphone services. The battle for 5G supremacy could determine who tomorrow's tech leaders are.