Despite government hype, state-owned carriers are reluctant to take the plunge

HONG KONG -- While the Chinese government pushes for the quick development of a 5G mobile network, the big three state-owned telecom carriers are cautious about making the large investments required and are seeking ways to limit their exposure.

The second- and third-ranked carriers in the country see cooperation as a means to that end. China Telecom Chairman and CEO Ke Ruiwen declared on Thursday that his company is in "deep consideration" to jointly build a fifth-generation network with its peer China Unicom.

Although Ke dodged questions from reporters in Hong Kong about the savings on investment and when an official agreement would be signed, he confirmed that top management on both sides have already reached a "high level of consensus" on the matter and "substantial progress" has been made toward a final deal.

The idea was hinted at by China Unicom Chairman and CEO Wang Xiaochu earlier. During the company's first-half earnings briefing on Aug. 14, Wang floated the idea of a "co-built, co-shared" 5G infrastructure. Wang left the door open to cooperating with China Mobile and China Broadcasting Network, which were granted 5G licenses in June, but said China Unicom was "mutually complementary" with China Telecom, noting their strengths in different regions of the country. China Telecom's Ke also mentioned these advantages on Thursday.

Both carriers are limiting their 5G investment budgets this year. China Telecom is keeping its budget unchanged from the beginning of the year at 9 billion yuan ($1.27 billion), while China Unicom is holding within the previously committed range of 8 billion yuan. 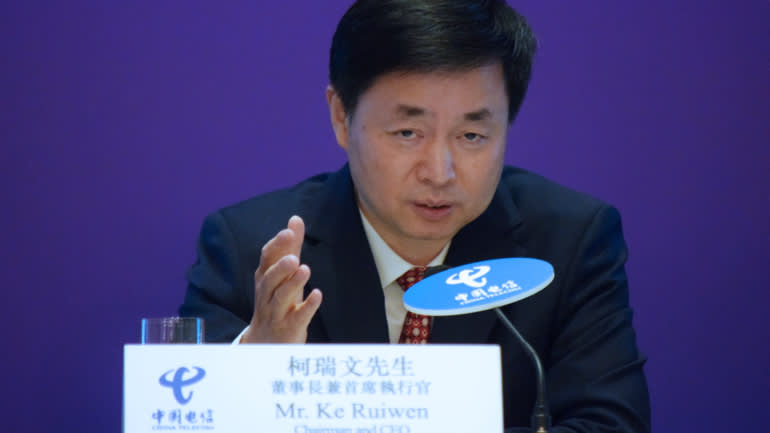 Ke Ruiwen, Chairman and CEO of China Telecom, revealed that his company is in "deep consideration" on a plan to co-build a 5G network with its peer China Unicom to save on investment spending. (Photo by Kenji Kawase)

Amid the ongoing trade and tech conflict with the U.S., Beijing hopes to swiftly develop a 5G infrastructure to pump up its faltering economy and provide vast new markets for local suppliers like Huawei Technologies, which is under immense pressure from Washington. But the mobile carriers, who will bear the actual costs the pricey investments require, remain prudent on how they will spend their diminishing income -- especially with no clear outlook for the return on those investments.

China Mobile, the largest player, has pledged to allocate 24 billion yuan to 5G this year, above the roughly 17 billion yuan the company hinted at in March. But Chairman Yang Jie stressed to reporters in Hong Kong on Aug. 8 that its total capital expenditure for 2019 will be under 166 billion yuan, below last year's 167.1 billion yuan. Despite the government's push for swift deployment of a network, Yang said "the peak period of 5G investment will be between 2020 and 2022."

The company's 5G investment this year is much smaller than the 38.7 billion yuan reported by Chinese media when 5G licenses were granted in early June. The government aims to spur job creation and support embattled equipment suppliers like Huawei and ZTE as the trade conflict with the U.S. drags on, but the carriers seem to have their own agenda.

This cautious approach can be seen at China Tower, a joint venture of the three major mobile carriers . Chairman Tong Jilu told reporters on Aug. 7 that the cell-tower builder has not changed its annual capital expenditure budget of 30 billion yuan since the beginning of the year. Tong stressed that his company's investment "is up to the telecom operators," adding the annual investment "would not likely exceed the budget."

Chairman Fok Tung-ling of Comba Telecom Systems Holdings, a major equipment supplier to the three carriers, admits that he has not seen any major uptick in its 5G-related orders. Talking to the media on Aug. 16 in Hong Kong, Fok said the peak would not arrive until next year and beyond. Due to the heavy investment costs of 5G, Fok believes "4G and 5G will coexist for a long time."

This prudence is a reflection of earnings pressure. The combined revenue at the three top Chinese telecom carriers for the first six months of 2019 was 725 billion yuan, down 1.2% on the year. But the trio saw their combined number of mobile users increase by 5% to about 1.6 billion, exceeding the nation's total population, pointing to market saturation and declining average revenue per users (ARPU).

The government is pushing for price cuts. Premier Li Keqiang gave a key policy address at the annual National People's Congress in March demanding that carriers "speed up broadband and lower internet rates. He also called for the average broadband service charges for smaller enterprises this year to be "lowered by another 15%," and average rates for mobile internet services to be "further cut by more than 20%." Wang of China Unicom said the request was better than the 30% cut demanded by the government last year, but its impact on the company's top line has been apparent.

The next-generation technology is not expected to bring in more revenue for the carriers right away. "We do not expect 5G to significantly improve [China Mobile's] ARPU in the short term," wrote Gin Yu, an analyst at Guotai Junan Securities in Hong Kong, in a recent research note. He reasoned that "due to insufficient coverage of 5G networks and the immature industry chain in the initial stage, users may not be willing to increase spending for 5G access."

The approach of the carriers has been generally welcomed by the investment community. Bing Duan, analyst at Nomura International Hong Kong, maintained its "buy" rating of China Mobile following a meeting with management on Aug. 9, when he appreciated the cautious tone on capital expenditures "to ease investors' concerns on weak cash flow and dividend payouts."

The possible collaboration by China Telecom and China Unicom is also seen positively by investors. Rocky Zhang, analyst at CCB International Securities, cited the "long-standing concern" over the financial health of smaller players like China Unicom on substantial 5G spending in the coming years. The co-building formula "will cut capex required for a 5G network build in half," he said. "If implemented, we believe such an approach would significantly enhance [China Unicom's] free cash flow and enterprise value."

The Communist Party's mouthpiece the People's Daily reported that when the 5G licenses were handed out to the four carriers on June 6, Miao Yu, minister of industry and information technology, said accelerating the commercialization of 5G services is part of the policy arrangement of the party and the central government. The Chinese telecom operators need to walk a fine line in terms of a 5G investment decision.