Coronavirus helps China pull ahead in the 5G race 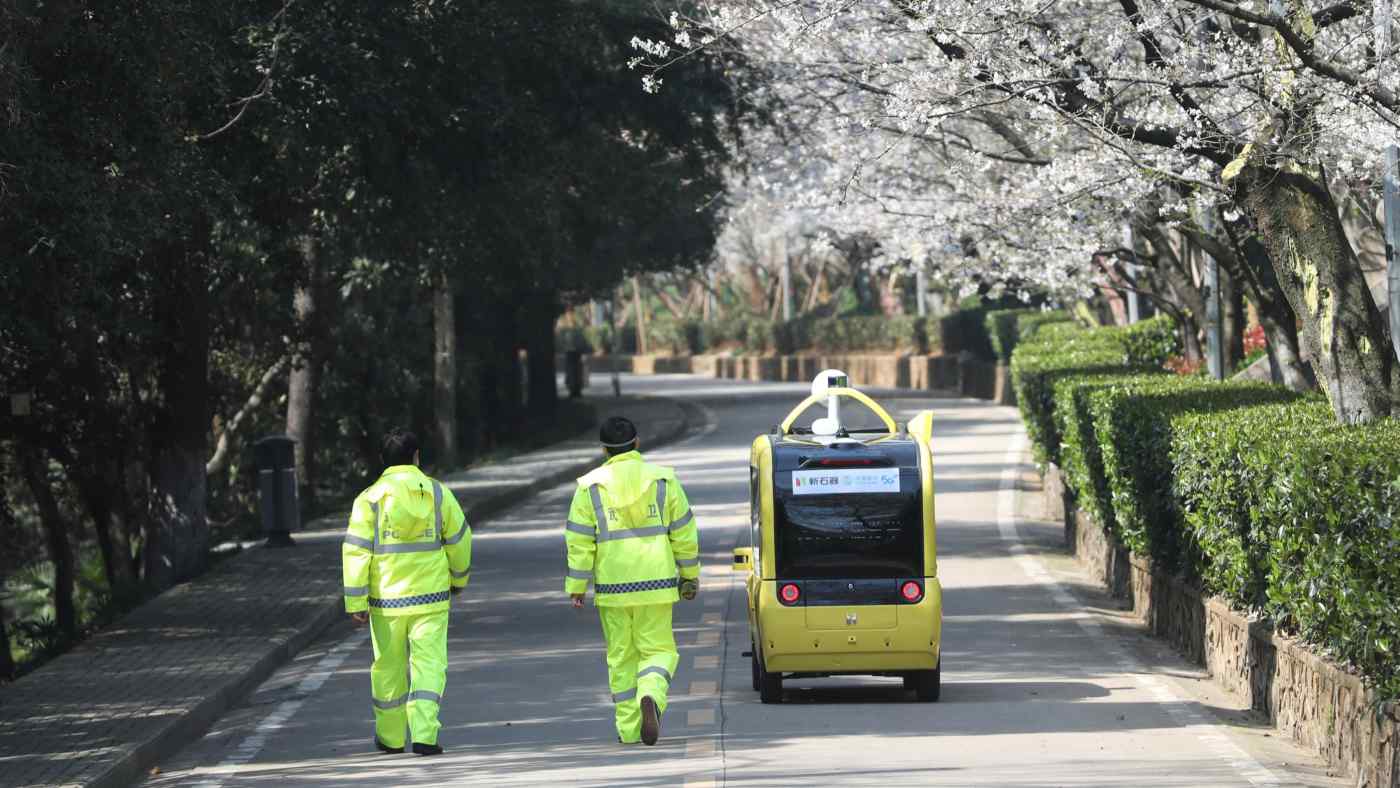 TAIPEI -- In February, as cities throughout Sichuan Province were locked down to combat the spread of the coronavirus, unmanned drones circled the skies, broadcasting pandemic prevention measures, spraying disinfectant, and even conducting thermal imaging checks on residents.

Some 1,800 km away in Beijing, 5G-powered drones dispatched face masks near the Beijing National Stadium and delivered hot meals to hospital patients to reduce human contact. In Wuhan, the original epicenter of the outbreak, hundreds of driverless vans continue to sanitize the streets.

These are just a few examples of how China has harnessed ultrafast 5G networks to fight the deadly virus -- and pull ahead of the West in a key technological battleground.

Far from derailing Beijing's ambitions, the coronavirus has given them a shot in the arm by providing the missing piece to the 5G puzzle: how to monetize the new technology.

"The COVID-19 crisis has turned out surprisingly to be a big opportunity for China to quickly test a lot of 5G applications -- including drones, driverless cars, unmanned stores and even 5G phones-- which no one knew how to use effectively last year before the pandemic," Wallace Hsu, an analyst with Market Intelligence & Consulting Institute monitoring Chinese state policies.

The medical field has found even more uses for 5G. More than 100 hospitals that have adopted 5G systems to do remote medical consultation amid the coronavirus outbreak. Doctors stationed in Zhejiang Province even used the technology to remotely control a robot to conduct an ultrasound test on a COVID-19 patient 700 km away in a hospital in Wuhan.

These and other uses of 5G are the result of collaborative deployments by Huawei Technologies, the world's biggest telecom equipment maker, and China Mobile, the country's top carrier.

Beijing began granting 5G commercial licenses last June to support Huawei after Washington placed the company on a trade blacklist last May. Then in March, Xi pledged to accelerate investments in so-called new infrastructure, including 5G deployment, data centers and high-speed rail, to stabilize the economy after China's GDP shrank 6.8% in January-March, its first decline since 1992.

Although state-backed China Mobile, China Telecom and China Unicom -- the country's three largest carriers -- had been lukewarm on investing in 5G given the volatile economic environment, they were not able to ignore the government's call to build. Combined, the trio will spend more than 180 billion yuan ($25.45 billion) on 5G-related infrastructure this year, five times higher than what they spent on 5G in 2019, according to companies' data.

China aims to build and operate at least 600,000 5G base stations across the country by the end of 2020, and it had already reached nearly a third of that target by the end of the first quarter of this year, according to data from China's Ministry of Industry and Information Technology.

This push has been a boon for Huawei and ZTE, the country's No. 2 telecom gear maker. The two together have secured a more than 80% share in China Mobile's 5G infrastructure projects, which account for 40% of total 5G base station in China this year. "Apart from China, the 5G deployment in the rest of the world is basically affected because of the ongoing coronavirus outbreak. Plans for 5G spectrum auctions such as in Spain, Italy, France and Austria have been put on hold," Kelly Hsieh, a telecom analyst at TrendForce, told Nikkei. "Moreover, China is using national policy to drive the realization of 5G technology, while in the U.S. and South Korea--among the early markets for 5G-- are more like consumer-driven markets. It is hard for these two countries to be fast without a killer application to attract consumers using 5G."

Not only is 5G infrastructure deployment on track, but China now sees signs of a recovery in the smartphone market, too, mainly boosted by 5G handsets. The market took a major plunge year-over-year in the first three months of 2020 due to the shutdown of businesses during the coronavirus epidemic.

Rick Tsai, CEO of MediaTek, the world's second-largest mobile chip developer after Qualcomm and a bellwether for non-Apple smartphone demand, said the worst has passed in China's smartphone market for 2020. "China's 5G rollout plan is on schedule," Tsai said. "In China, we are reasonably comfortable that the market is coming back to a more normal pattern after the first quarter, a down quarter. ... For the second quarter [April-June], we believe the China smartphone market will kind of grow back to a similar level, maybe a little lower compared to second quarter 2019, after checking with customers."

Chinese smartphone makers are more aggressive than other players in the industry in rolling out 5G smartphones. Xiaomi Chairman and CEO Lei Jun said in February that the company, which ranks No. 4 in the world, is set to introduce more than 10 5G-capable handsets this year. Huawei, Oppo and Vivo have already introduced 5G flagship and 5G midrange smartphones models for a second year. Apple, by contrast, will only launch its first 5G iPhone in the second half of this year, and there is a possiblity that there will be a delay to that timetable.

Nevertheless, market watchers warn that the global economic slowdown could still affect business and consumer confidence, which could convince some to hold off on buying a more expensive 5G smartphone.

"5G is really something for big countries like China to showcase its tech prowess. On the government level, there is no reason for a slowdown in development," said Joey Yen, a tech analyst with IDC, a research firm. "However, the overall economic weakness is still a big concern for the second half of this year. ... We really don't know at the end of the day whether consumers will really go out to buy those 5G phones in China and whether private businesses will still finance those upgrades for 5G routers and wireless internet that fast in the post-coronavirus era."