TOKYO -- Huawei Technologies is on a mission to prove itself as a leader in 5G mobile technology while also developing its own key components to lessen its dependence on U.S. parts.

To see how well the Chinese tech giant is meeting those goals, Nikkei performed a teardown of the company's first ever 5G smartphone, the Mate 20 X(5G).

The phone is an updated version of the original Mate 20 X that hit shelves last year. The 5G model arrived this August, after Huawei was forced to delay the release of the foldable Mate X, which was originally supposed to be its first 5G offering.

For the teardown, Nikkei xTECH, the Nikkei group's technology-focused web magazine, partnered with DMM.make Akiba, a coworking facility in Tokyo. Huawei's first 5G smartphone Mate 20 X(5G) as it has been booted up in China, where this phone was purchased.(Photo by Nikkei xTECH)

The key component of the new phone is the Balong 5000, a 5G chipset developed by Huawei chip unit HiSilicon.

The Balong 5000 is Huawei's answer to the U.S. sanctions.

The Trump administration has blacklisted the company as a potential security treat to the U.S., leaving Huawei's continued access to a wide range of cutting-edge American technologies in doubt. This has prompted the Chinese maker to start developing key components for its devices on its own.

The Balong 5000 modem is one of the fruits of this strategy. Another is the Kirin 980, a high-performance system on a chip (SoC) for smartphones developed by HiSilicon.

When we pried open the Mate 20 X(5G) and examined its motherboard, we could not immediately spot any chipset that appeared to be the Balong 5000.

What caught our eye was the memory chips: two dynamic random-access memory, or DRAM, chips made by Micron Technology of the U.S. and Samsung Electronics of South Korea, and a flash memory chip, also by Samsung. The Micron DRAM had a capacity of 8 gigabytes, the same as the phone's memory. That led us to surmise that, as in other Huawei smartphones, the application processor was probably installed under that DRAM using the so-called package-on-package (PoP) stacking method.

The PoP stacking method itself is nothing new. In many smartphones on the market, the application processor and DRAM are installed on top of each other with the logic package on the bottom. Among the benefits of this approach are higher density and shorter routing, which boost the chip's performance.

The 5G modem in this Mate 20 X, we conjectured, might have been installed under the Samsung DRAM using the PoP method. We guessed right. As we removed the two DRAMs from the motherboard, we found the Kirin 980 application processor under one and the Balong 5000 5G modem under the other.

We do not know why Huawei combined the 5G modem with a DRAM in this way. One engineer said the company may have been unable to secure enough space for the memory that the 5G modem requires. While 4G modems typically contain memory, the engineer explained, a 5G modem needs to support more frequency bands than a 4G modem, which means it needs much more memory. Heating to remove DRAMs from the motherboard.(Photo by Yasushi Kato)

In fact, the Balong 5000 supports 2G, 3G and 4G networks as well as 5G, which uses millimeter waves and sub-6GHz spectrum.

On the other hand, the motherboard design was not as sophisticated as it could have been. One of the engineers involved in the teardown pointed out the large number of screws that were used. Another said the design seemed to indicate that it was initially designed as two separate circuit boards but had been integrated into one on second thought.

There were also signs that Huawei engineers were struggling to complete their mission as quickly as possible, such as coaxial cables running over the board and the use of a flexible printed circuit.

These signs indicate that the engineers had put top priority on meeting their deadline, even at the expense of costs and design sophistication.

Indeed, Huawei was likely in a hurry to bring out its own 5G phone after being beaten to the punch by domestic rival ZTE on that front.

The surface of the motherboard after the DRAMs have been removed. After removing a 3GB DRAM the Balong 5000 5G modem was found underneath, and the Kirin 980 application processor under a 8GB DRAM. (Photo by Yasushi Kato)

The Balong 5000 and the Kirin 980 are not the only HiSilicon chips used for the Mate 20 X(5G). The phone we disassembled contained 19 semiconductor devices made by Huawei's computer chip unit.

These devices contained many radio frequency circuits, including those made by U.S. companies.

The front-end modules in the Mate 20 X(5G), for example, were supplied by Skyworks Solutions and Qorvo. Front-end modules are a type of RF chip that handles different radio frequencies and make the phone capable of engaging with mobile network signals. Both Skyworks and Qorvo are among Huawei's core suppliers. 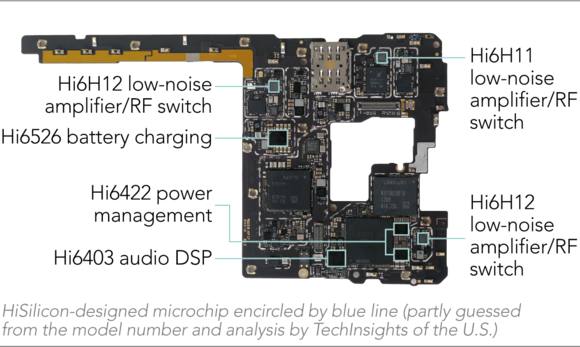 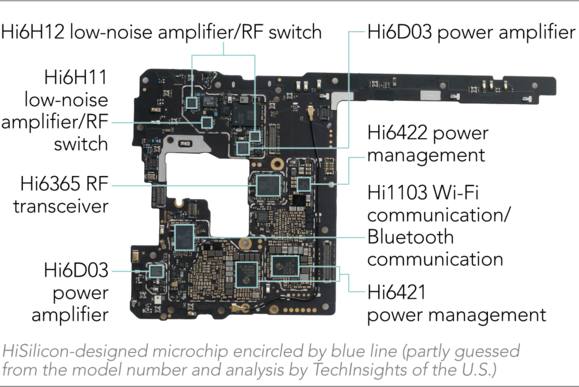 Qorvo temporarily stopped supplying Huawei immediately after it was put on the U.S. blacklist in May, giving a taste of how damaging the sanctions could potentially be for the Chinese company.

RF chip production requires cutting-edge technology, and it is unlikely HiSilicon will be able to match its U.S. peers in quality and performance any time soon.

Given the enormous risk of continued dependence on U.S. supplies, however, there is little doubt that Huawei will try to make all key smartphone components itself, including sophisticated components like these.

Indeed, Huawei has been secretly developing its own in-house RF chips for the past ten years, industry sources say. "It's true that the performance of Huawei's in-house RF chips may not achieve the level of its U.S. peers but most consumers will not recognize any big difference," one chip industry executive told Nikkei Asian Review.