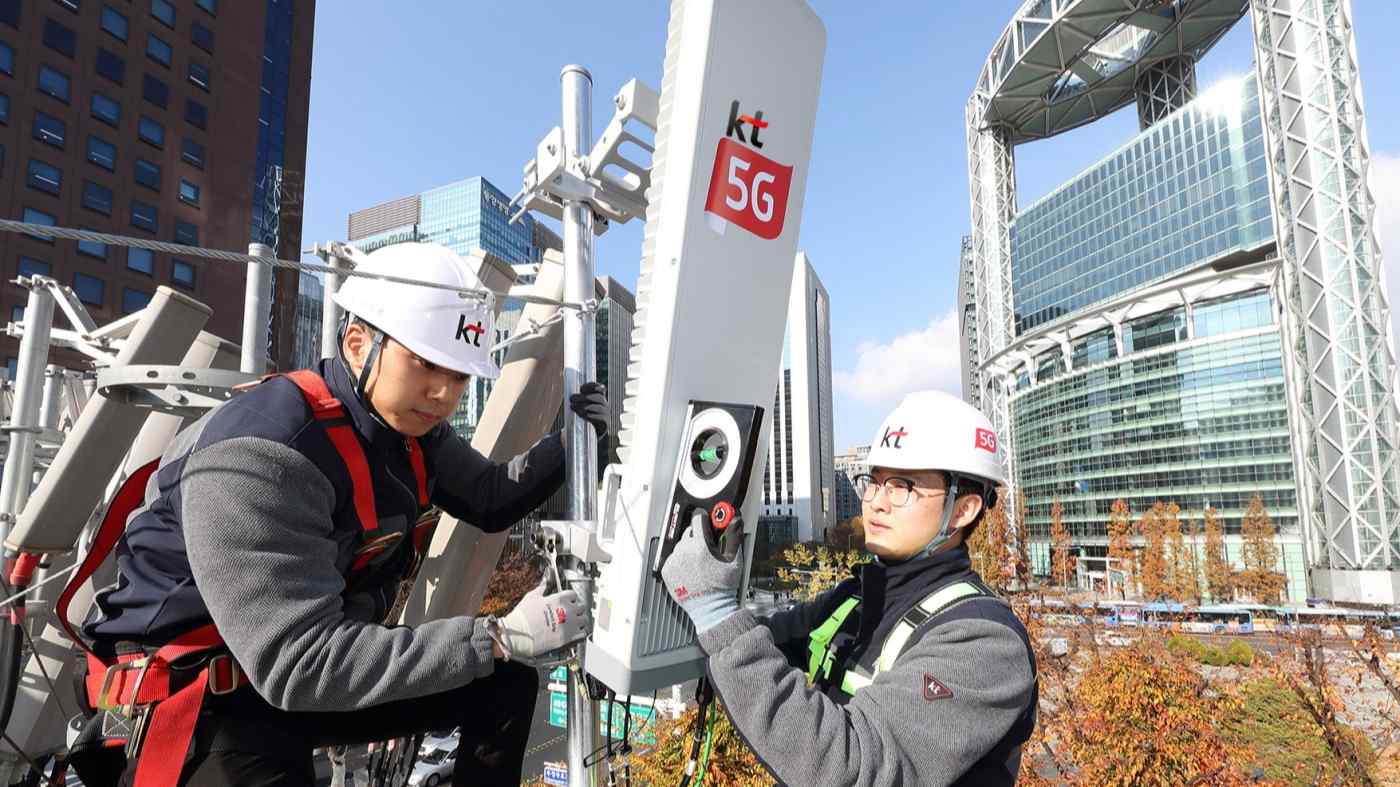 SEOUL -- A South Korean commuter watches a streaming service on his smartphone during a recent trip to work, but while the video can be viewed using high-speed 5G signals, he purposely set the phone to 4G reception instead.

South Korea leads the U.S. and Japan in 5G coverage, having begun rolling out fifth-generation mobile technology three years ago. But the country faces a lack of exclusive 5G content and services available to retail subscribers.

The country's three big telecommunications firms have extended 5G coverage to more than 90% of urban areas, according to the Ministry of Science and Information and Communications Technology. South Korea's relatively small territory and high population density propelled progress on base station installation.

During the first year of commercial 5G services in 2019, the three telecoms lifted capital spending by about 50% from 2018. This high level of investment has persisted.

"Korea will lead global trends with its outstanding ICT technologies while exerting leadership in forming cross-border cooperation," she said.

Major mobile carriers SK Telecom, KT and LG Uplus captured 21.56 million 5G subscriptions as of the end of 2021, covering roughly 30% of the 73.15 million mobile contracts overall in South Korea. The U.S. and Japan hover around only 20% for 5G penetration.

The three big telecoms encouraged people to switch to 5G by offering discounts on services. Consumers can access superfast connections at practically the same payment structure as for 4G lines.

The 5G download speeds hit 800 megabits per second, about 10 times faster than 4G, the South Korean government says. But the telecoms have not taken full advantage of the technology in terms of offering products to end users.

When the three carriers were asked what 5G-exclusive services they provide, the replies were mostly limited to streams of live broadcasts or local 5G networks for factories and other business concerns.

South Korea's launch of 4G services in 2011 overlapped with the rise of smartphones. Demand for video streaming, as well as demand for business applications, created a boon for that communication standard. Muted consumer reaction to 5G contrasts starkly with the excitement around 4G.

Yet the telecoms are still developing their 5G networks in anticipation of future advancements.

"The basic 5G infrastructure will provide the foundation to accelerate technological innovations such as autonomous driving and the metaverse," said a representative from SK Telecom.

The same telecom is putting together K-pop concerts that can be attended via virtual reality devices. High-definition cameras capture movements by performers that are replicated by avatars in an immersive metaverse.

KT is collaborating with a startup to develop a sports broadcasting platform that incorporates artificial intelligence. High-def cameras are being installed at sports venues to capture the motions of players and the ball. The AI program automatically edits the 5G broadcast to match a viewer's preference.

LG Uplus is concentrating on business-to-business 5G services. The telecom installed sensors at a petrochemical complex in the eastern port city of Ulsan. The devices determine whether aging pipes or other parts need replacement before an accident occurs.

At the Port of Busan, the 5G services from LG Uplus are used to control cranes remotely at container terminals, boosting cargo shipping capabilities.

Business at the three telecoms is biased toward domestic consumption. The companies look first to build a track record in South Korea with the goal of exporting 5G infrastructure.

But a welcoming legal environment is needed to commercialize autonomous driving and remote health care. This will include creating special deregulation zones to spur development of 5G-powered industries.