Superfast network seen as unnecessary in country not built for speed 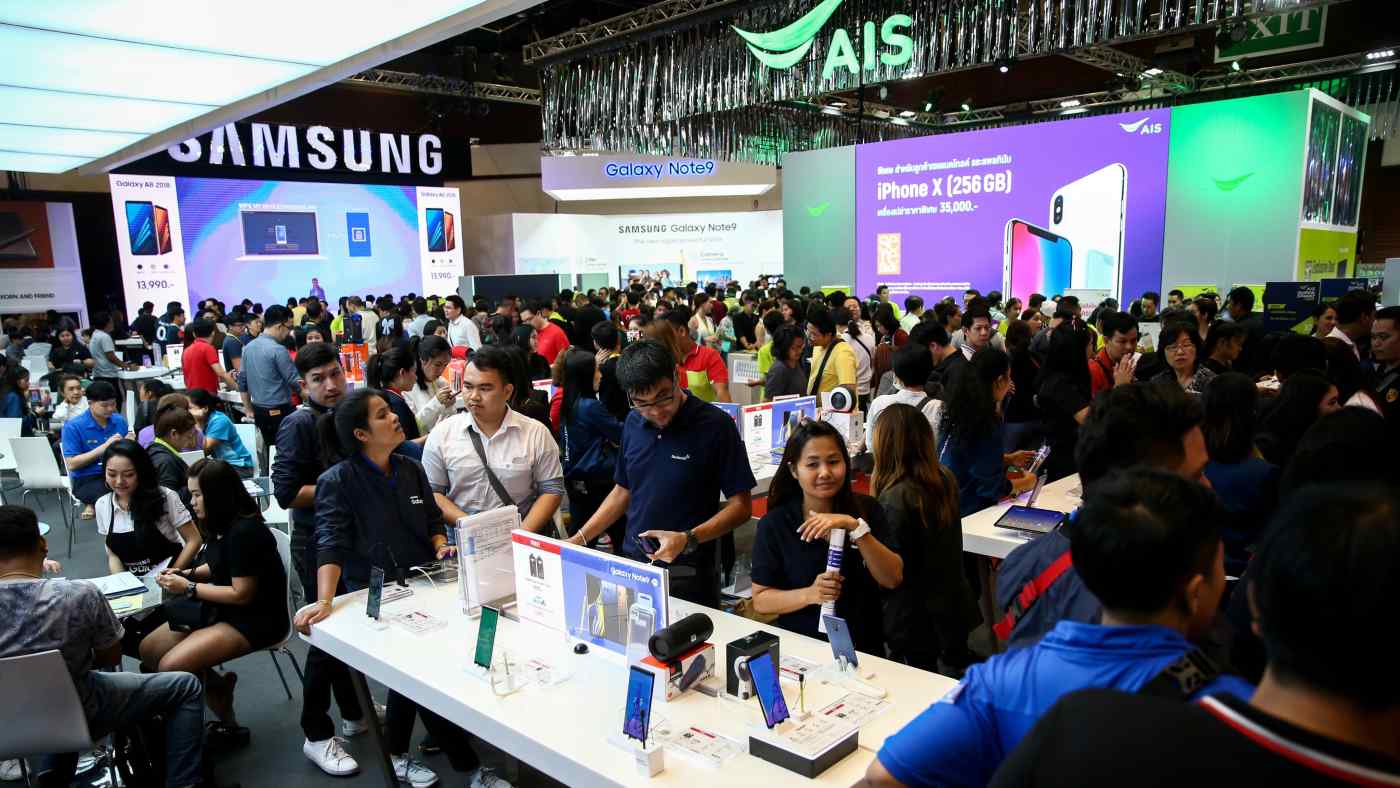 People test mobile phones at an exhibition in Bangkok. The Thai government has been pushing telecom operators to invest in 5G infrastructure lest the country fall behind others in the region.   © Reuters
APORNRATH PHOONPHONGPHIPHAT, Nikkei staff writerMay 10, 2019 18:33 JST | Thailand
CopyCopied

BANGKOK -- Thailand risks being left behind in Asia's race to roll out fifth-generation networks, despite the junta's recent controversial move to offer financial relief to the country's telecoms in the hopes of stimulating investment.

Last month the Thai junta issued an order granting loan extensions to three major telecom operators in exchange for their promise of a rapid 5G rollout.

The order extends the repayment periods on 60-billion-baht ($1.87 billion) licensing fees incurred by Advance Info Service and True Corporation's for their 4G networks by five years, from 2020 to 2025. The other telecom, Total Access Communication, also known as DTAC, would have its repayment period on 30 billion baht extended from 2021 to 2026.

All three submitted requests for the extensions on Friday to build liquidity for future investments. However, all remain cautious about development of 5G, saying they need to see how spectrum is allocated.

"We think that new spectrum allocation should be delayed until [the National Broadcasting and Telecommunications Commission] can publish a clear spectrum road map, including time for allocation and fair valuation of available spectrum, before discussing any further auctions," said Rajiv Bawa, DTAC's chief corporate affairs and business development officer.

And the loan extensions may not be enough to prod the companies into action, as 5G development could wind up costing as much as 100 billion baht.

According to Weerawat Kiattipongthaworn, chief corporate officer of Advance Info Service, it is all about money. "The added financial burden is a major factor affecting decisions for added infrastructure development," he told local media.

The loan extensions have also sparked criticism from those who object to the terms of the relief. "It's strange that the three companies can have their repayment periods extended without having to shoulder additional interest fees," said Somekiat Tangkitvanich, president of Thailand Development Research Institute.

Other critics say that what are essentially loans to the three telecoms could cost the state as much as 19.7 billion baht in lost revenue.

But faced with the twin challenges of a middle income trap -- in which economies become stuck at a middle level of development -- and an aging population, Thailand has been desperate to roll out 5G. The country hopes the technology will encourage factories to rapidly adopt robots and artificial intelligence to reduce costs and increase competitiveness.

"It's clear that the support aims to maintain the liquidity of the three telecoms so they can launch 5G by next year," said Terdsak Taweethiratham, senior analyst at Asia Plus Securities.

Suphan Mongkolsuthree, chairman of the Federation of Thai Industries, thinks the government may be overly ambitious, saying that Thai industries have not yet developed enough to utilize AI and robots, and that massive investments are needed until they reach that point.

Still, he maintains that Thailand needs to accelerate 5G development to prevent it from falling behind other countries, particularly members of the Association of Southeast Asian Nations.

The financial relief granted the three telecoms is conditioned on their bidding in the 700 MHz band auction scheduled for later this year, with winners obligated to begin 5G development by next year.

Some telecoms have already started testing 5G. AIS set up a development lab with Chulalongkorn University in February, while True launched its own 5G network at ICON Siam shopping mall in Bangkok. But both projects are tiny.

Many analysts echo Suphan Mongkolsuthree of the Federation of Thai Industries, pointing out that the industrial sector is far from ready to adopt technologies that can take advantage of 5G's speed.

"This means demand for 5G remains limited and that telecoms might not think its worth the investment," said an analyst from KGI Securities.

He added that of the estimated 100 billion baht investment required to roll out 5G, some 60% to 70% would be in licensing fees, making the telecom companies think twice, despite the promise of government support.

Thailand's recent elections may allow the military junta to continue wielding control over the country. But even this might not be enough to induce industry to jump on the 5G bandwagon.