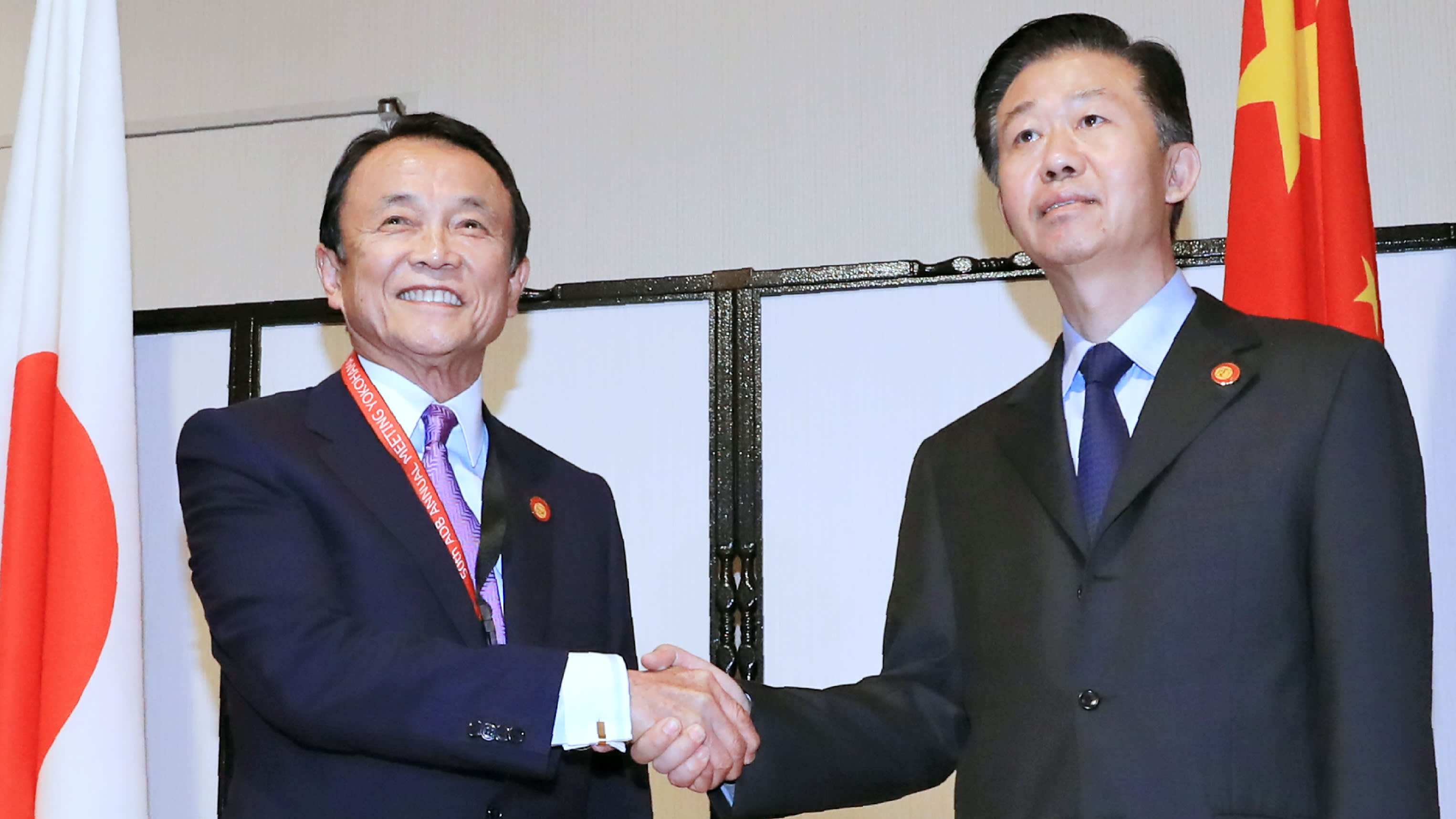 Tokyo concerned that China's economic problems could have spillover effect

YOKOHAMA -- Japan and China held high-level talks on the sidelines of the Asian Development Bank's annual meeting on Saturday to discuss the bad loan situation in China and bilateral cooperation in Asia.

Taro Aso, Japan's deputy prime minister and finance minister, met with Chinese Finance Minister Xiao Jie, accompanied by officials from the Bank of Japan and the People's Bank of China. It was a rare meeting involving senior fiscal and monetary authorities from the two countries and came despite the fierce rivalry between Japan and China for regional leadership and economic influence.

Despite its continued high rate of growth, China's economy is increasingly faced with structural challenges, including sudden capital outflows, a large manufacturing overcapacity and a rise in the number of non-performing loans in the banking sector.

China is Japan's largest trading partner and its biggest source of foreign visitors. The close economic ties mean that any problem in China could have immediate repercussions for Japan, including triggering an appreciation in the Japanese yen and falling stock prices such as occurred when capital outflows from China intensified in mid-2015.

Japan has been a major source of foreign direct investment and manufacturing expertise for China.

The participation of the PBOC in the high-level bilateral dialogue is important for Japan, as the Chinese central bank is responsible for the nation's currency policy. It is often in the currency market that signs of economic problems first manifest themselves. However, PBOC Deputy Governor Yi Gang failed to attend the meeting as was originally scheduled. No explanation was given for his absence.

China's economic rise has presented Japan with new challenges as China increasingly challenges Japan's position in Asia. In 2015, for instance, Beijing helped establish the Asian Infrastructure Investment Bank, making it a direct competitor to the Tokyo-led ADB. China has also boosted infrastructure investment, such as the construction of power plants and railways in the region where Japan used to be the dominant player.

Japanese officials said that the finance ministers discussed how to promote cooperation between the ADB and the AIIB.

China and Japan are also engaged in territorial disputes over the group of islands in the East China Sea known as Senkaku in Japan and Daioyu in China.

While the political disputes between Asia's two economic giants have raised alarm in the rest of Asia, their rivalry has also benefited the region since countries play them off against each other to gain better deals.

Sri Lanka is one of the countries that has welcomed the competition. "Previously [among major aid givers], there was a sense of arrogance, 'Who else have you got to go but me?'" said Ravi Karunanayake, the Sri Lankan finance minister, on Saturday. But the emergence of China has meant that donors have become more responsive to the needs of recipient countries, he added.