SYDNEY -- A small island has found itself caught in the escalating battle for influence in the South Pacific.

On both economic and diplomatic fronts, Papua New Guinea's autonomous region of Bougainville has become a key piece in the game between Beijing, on one side, and the U.S. and its allies on the other.

With Bougainville holding one of the world's largest untapped deposits of copper, Chinese and Western companies are weighing the prospects for reopening its Panguna copper mine -- closed since a vicious civil war broke out in 1989. The island is also set to hold an independence referendum on June 15, potentially creating a new country that could vote in international forums such as the United Nations.

John Momis, president of the Autonomous Bougainville Government, told the Nikkei Asian Review that Chinese businesspeople raised the matter of investing in the mine on a visit to PNG ahead of last month's Asia-Pacific Economic Cooperation summit in the capital, Port Moresby.

Momis said he told them that, "Panguna is not an easy issue, and as far as ABG's concerned we have decided to put it on the back burner until the referendum." The peace agreement signed by the PNG government and island leaders in 2001 created the ABG and set the stage for the referendum. Chinese involvement with the mine would give Beijing a direct role in the economic future of a newly independent nation as it seeks to secure resources and expand its strategic network. It would also boost China's sway in its power game against the U.S. and regional rivals such as Australia.

But given its potential resources, the government in Port Moresby would be loath to lose the island, especially the Panguna mine. And while the referendum is not binding, blocking a secession backed by most of the local population might be a recipe for renewed unrest in the volatile country.

Diplomatic sources said 99% of residents will support independence; Ted Wolfers, a professor at Australia's University of Wollongong, said the consensus is an "overwhelming majority" will vote that way. But he also suggested PNG would not let the island go easily.

The island, and particularly the mine, have a tangled present shadowed by a brutal past. The decadelong civil war that killed more than 20,000 people -- about 10% of Bougainville's population -- was triggered by resentment over pollution and revenue distribution from mining. Bougainville was also a battlefield when Japan invaded the island during World War II in an attempt to cut off a sea-lane between the U.S. and Australia. Chinese President Xi Jinping and Papua New Guinea's Prime Minister Peter O'Neill shake hands after unveiling a plaque during the opening ceremony of the China-Aid PNG Independence Boulevard Project in Port Moresby on Nov. 16, ahead of the APEC summit.   © Reuters

PNG desperately needs foreign currency. In September, the government issued its first dollar bonds and managed to raise $500 million -- crucial funds as the country attempts to manage $2.5 billion in foreign debt, almost $590 million of which is owed to China, according to Reuters.

"Beijing's trade and investment in the region is focused mostly on Papua New Guinea, the region's largest economy and home to rich gold and nickel mines, liquefied natural gas, and timber forests," the U.S.-China Economic and Security Review Commission said in a report in June.

The report notes that state-owned China Metallurgical Group manages development of a $1.4 billion nickel and cobalt mine in PNG, with funding from the Export-Import Bank of China. This, the report says, is "China's largest single investment in the region and its biggest foreign greenfield mining project." About 40 Chinese companies operate in PNG, according to China's state-run Xinhua News Agency.

Indeed, Beijing offered PNG about $60 million worth of aid to host the recent APEC forum, according to a diplomatic source. This included road repairs and a supply of bulletproof vehicles.

China currently has eight South Pacific countries in its corner, including PNG, while Taiwan has the recognition of six, such as the Solomon Islands. Chinese President Xi Jinping has made little secret of his desire to deepen Taiwan's isolation; there is talk of the Solomons, where China has also opened up its checkbook, switching allegiances. Papua New Guineans, including some wearing Chinese flag T-shirts, gather to welcome Chinese President Xi Jinping in Port Moresby on Nov. 16. The road was constructed with funds from Beijing. (Photo by Fumi Matsumoto)

China's outreach to the South Pacific has spurred Western allies to, belatedly, push back.

In the run-up to the APEC meeting, Australia and New Zealand -- long the main benefactors for South Pacific nations -- joined the U.S. and Japan in announcing a plan to build up PNG's electricity infrastructure.

U.S. Vice President Mike Pence, in his speech at the APEC summit, announced a plan for U.S. cooperation in bolstering a naval base on Papua New Guinea's Manus Island. In remarks clearly directed at China, Pence referred to recent naval exercises with India and Japan, and said: "We will work with these nations to protect sovereignty and maritime rights of the Pacific islands as well."

For now, the island states find themselves in the enviable position of being courted by China, the U.S. and its allies all at once. 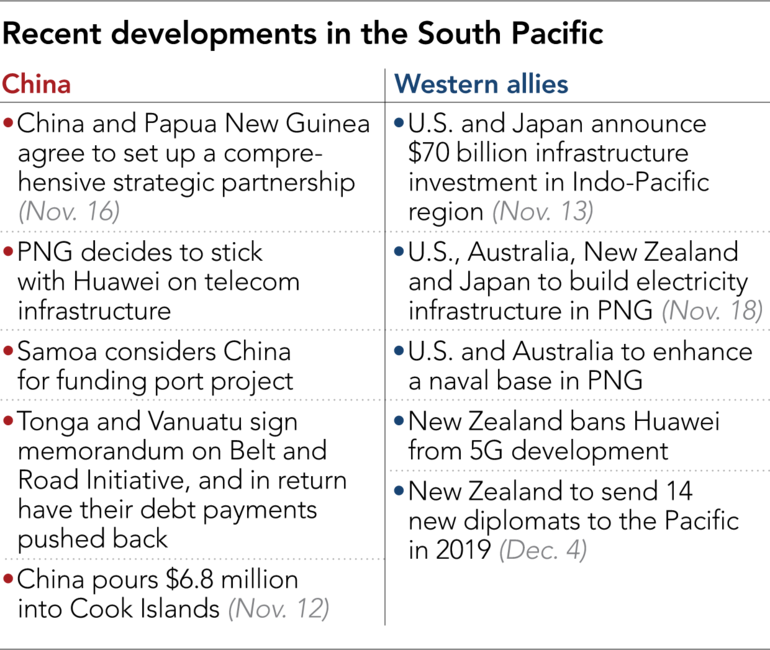 A similar story is being told across the South Pacific.

Vanuatu signed an agreement with China to take part in Beijing's Belt and Road infrastructure initiative. In return, China agreed to a moratorium on nearly $3 million worth of debt, according to a local newspaper. In April, reports surfaced that China was planning to build a military base in Vanuatu. Alarmed by this, the U.S. and Australia swiftly moved to start talks with the island state on a bilateral security treaty.

The increased attention from partners, both old and new, means that Pacific nations "now have more leverage," said Jonathan Pryke from the Lowy Institute, an Australian think tank.

The issues of the mine and referendum puts Bougainville firmly in the spotlight. While the situation on the island is replete with risks, Panguna's reserves are very attractive to China, the world's largest copper consumer.

The deserted mine contains more than 1 billion tons of ore, according to a study from 2009 -- more than the 675 million tons extracted over the 18 years it was open. These deposits look even more valuable given global concerns over copper supplies, due to emerging market demand, depletion of known resources, rising mining costs and limited new discoveries. The Panguna copper mine, which holds some of the world's largest deposits, was at the heart of the Bougainville civil war that killed about 20,000. (Photo by Alex Smailes/Sygma via Getty Images)

A number of companies are circling. A Lowy report said there has also been corporate interest in the mine from Australia, the U.S., Canada and Brazil.

Whoever wins out will be able to cement a foothold in the region, but it will come at a financial cost.

Professor Wolfers said interested parties would have to consider the startup costs of reopening the mine, which he sees reaching as much as $8 billion.

Bougainville's President Momis said the island's government was taking a cautious stance on the investment interest.

"We don't believe anybody who comes and talks about these issues until we see things in concrete and on paper," he said.