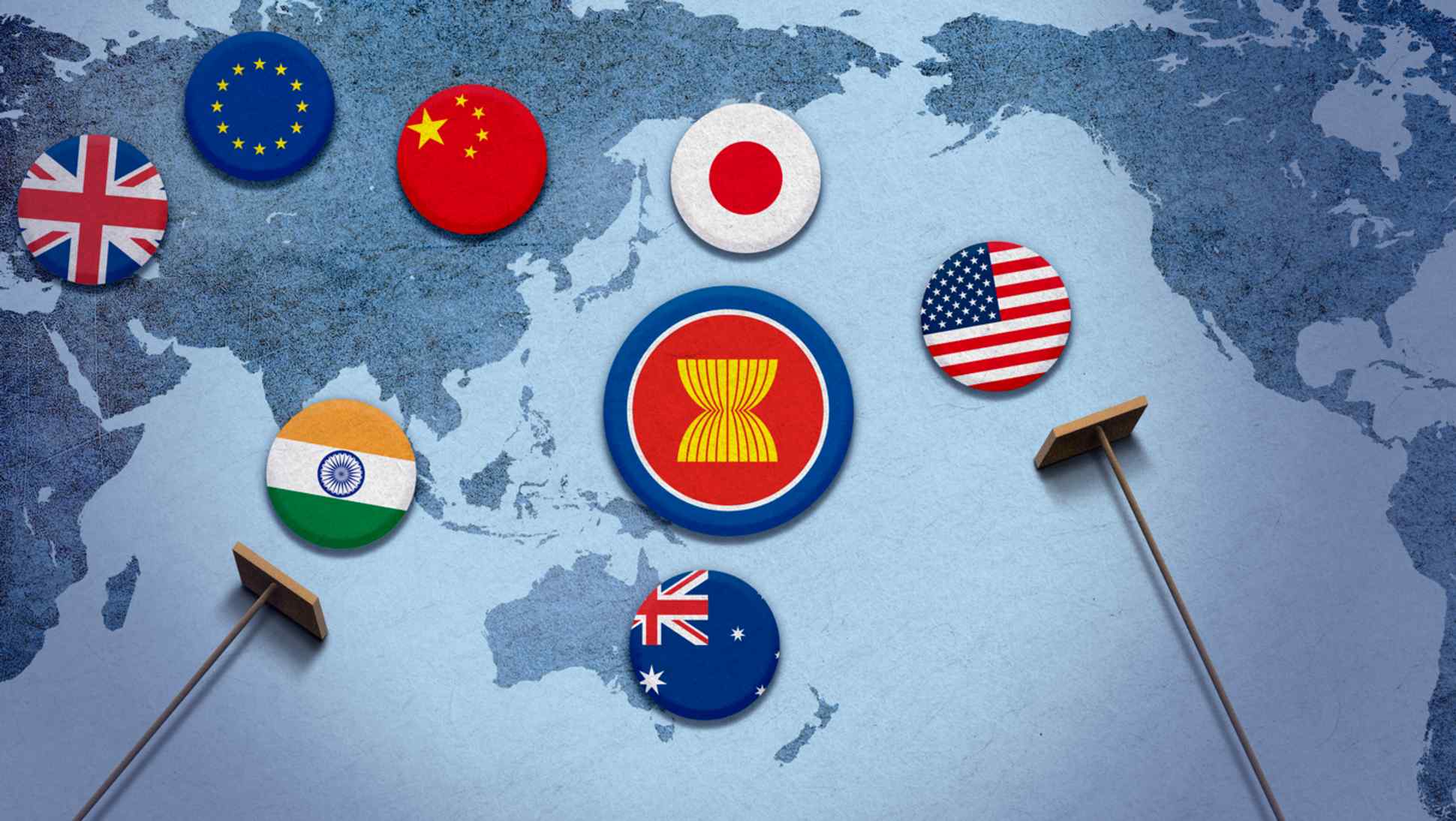 ASEAN defends its Indo-Pacific 'centrality' between Quad and China

SINGAPORE -- As superpower encounters go these days, it was par for the course.

But for Singaporean Defense Minister Ng Eng Hen, the important thing was that Austin, Wei and representatives from 16 other countries came together to discuss contentious subjects. Taiwan, South China Sea territorial disputes, bloodshed in Myanmar -- all were on the table.

"The fact that these issues were raised shows that the ADMM-Plus continues to be relevant," Ng said.

Indeed, the meeting is one example of how the Association of Southeast Asian Nations itself has achieved relevance, or even "centrality," as the bloc's leaders like to put it. The grouping of 10 small and medium-size economies has become the glue for a host of regional diplomatic forums and economic initiatives. But as the world's biggest powers push their own Indo-Pacific strategies, ASEAN's centrality and togetherness will become all the more difficult to maintain, experts say.

The rise of the U.S.-led Quadrilateral Security Dialogue, or Quad, and other external powers' moves toward the Indo-Pacific will be a "test for ASEAN," said Koichi Ishikawa, a research fellow at the Institute of Asian Studies at Japan's Asia University and a longtime observer of the bloc.

"If the Quad and others decide the region's order and frameworks, regardless of the will and intentions of ASEAN," Ishikawa said, "there is a risk of shaking the centrality of ASEAN." 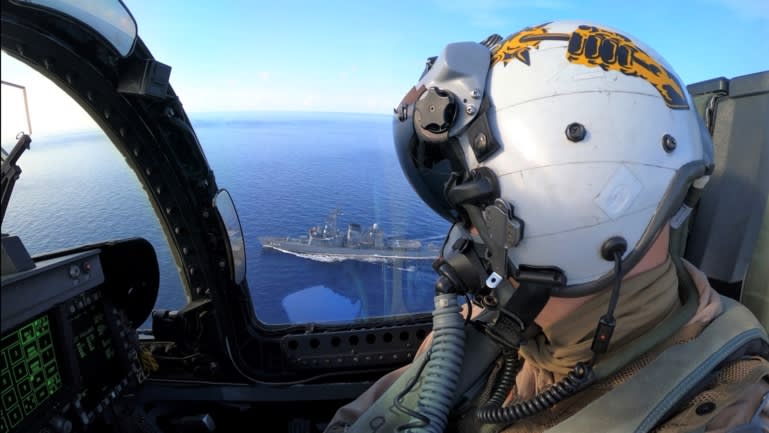 A U.S. fighter jet conducts a passing exercise with Japanese ships in the South China Sea in July 2020. The countries, with India and Australia, are strengthening the Quad security grouping.   © Reuters

It may be an ambiguous concept, but proponents of ASEAN centrality have real concerns about it fading, especially as COVID-19 and the Myanmar crisis continue to strain the bloc. A less influential ASEAN, the thinking goes, could lead to greater U.S.-China tension in the region. And a less peaceful region would be a less attractive investment destination, potentially hurting economic growth.

Centrality has become a mantra for ASEAN over the years. It is enshrined in the ASEAN Charter, adopted in 2007, 40 years after its founding. The document lays out a mission "to maintain the centrality and proactive role of ASEAN as the primary driving force in its relations and cooperation with its external partners in a regional architecture that is open, transparent and inclusive."

In many ways, ASEAN has lived up to that. The 10 ASEAN members -- Brunei, Cambodia, Indonesia, Laos, Malaysia, Myanmar, the Philippines, Singapore, Thailand and Vietnam -- have put their collective stamp on the regional architecture.

The ADMM-Plus provides a forum for security dialogue among the bloc, the U.S., China, Russia, Japan, South Korea, India, Australia and New Zealand. At this year's meeting, the participants reaffirmed their "respect for and adherence to international law."

Singapore's Ng said the meeting was "useful" for reaching "a number of points of consensus that are forward-looking," calling the ADMM-Plus the "de facto security grouping for this region."

ASEAN invites the same eight countries to the East Asia Summit for broader discussions. An even bigger framework, the 27-member ASEAN Regional Forum, scheduled to convene in early August, is a rare international dialogue that includes North Korea. 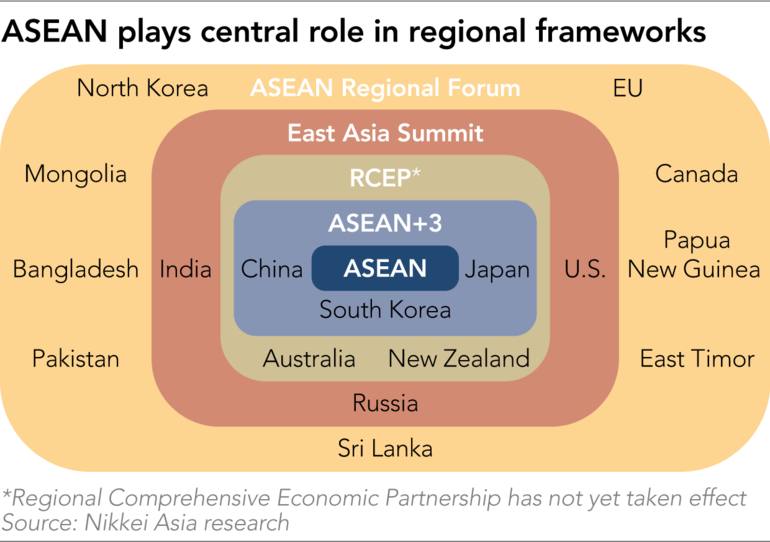 Yet, despite ASEAN's integral role in regional diplomacy and economic integration, there is growing acknowledgment that the playing field is changing fast. The day before the ADMM-Plus, Indonesian Defense Minister Prabowo Subianto told an ASEAN-only meeting that the bloc needs to solidify its own Indo-Pacific strategy to preserve its "unity and centrality."

"It is very important for ASEAN to view this region as a unified whole," he stressed, "and not to allow a bigger power to potentially divide ASEAN."

The Indo-Pacific, spanning the Indian and Pacific oceans, has become a primary arena of both global cooperation and confrontation.

China has expanded its influence with its Belt and Road Initiative, pushing billions of dollars worth of infrastructure projects. The Council on Foreign Relations, a U.S. think tank, says 139 countries are participating in some capacity, including all 10 ASEAN states.

At the same time, Beijing continues to assert itself in the South China Sea, a crucial waterway for global trade where it has overlapping claims with several Southeast Asian countries. China's militarization of outposts and frequent incursions into its neighbors' economic zones and airspace have raised serious international concerns about freedom of navigation. 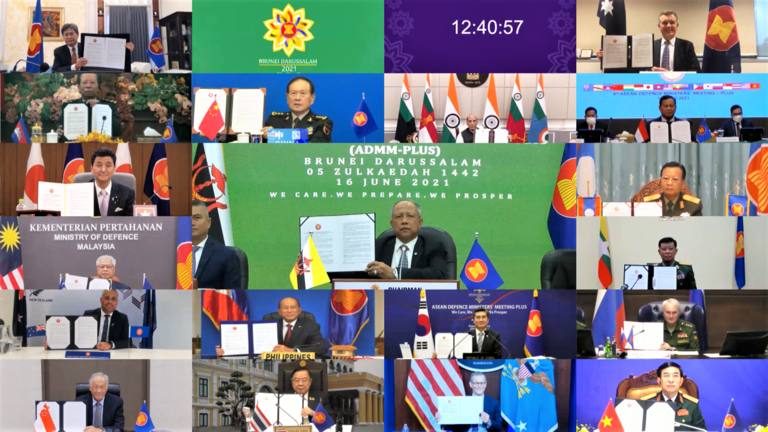 Western allies have been less than subtle about their desire to check China in the region. U.S. President Joe Biden has prioritized the Quad with Japan, Australia and India, promoting the "free and open Indo-Pacific" strategy Austin highlighted. "We support the rule of law, freedom of navigation and overflight, peaceful resolution of disputes, democratic values, and territorial integrity," the Quad said in a joint statement after its first-ever leaders summit in March.

The European Union also released an Indo-Pacific strategy this year, seeking greater cooperation on matters such as ocean governance and climate change.

And the U.K., no longer part of the EU, highlighted Indo-Pacific engagement in its Integrated Review of security policy this year. Last month, it deployed its new 65,000-ton HMS Queen Elizabeth aircraft carrier to the region, with plans to sail through the South China Sea.

One thing the various Indo-Pacific strategies have in common is that they recognize the importance of engaging ASEAN and securing the bloc's support to achieve their goals. The Quad leaders' statement explicitly expressed "strong support for ASEAN's unity and centrality."

Some experts are not convinced.

"Faith in leveraging the ASEAN-centered architecture to address the China challenge, which lies at the heart of these Indo-Pacific strategies, has all but faded away," said Hoang Thi Ha, fellow and co-coordinator for the Regional Strategic and Political Studies Program at Singapore's ISEAS-Yusof Ishak Institute.

Hoang senses that the typical ASEAN approach, exemplified by the ADMM-Plus and other broad forums, will not satisfy the big players. She said the bloc's "all-inclusive and cooperative security, anchored in ASEAN-led multilateral mechanisms, is deemed inadequate in mediating the growing estrangement among the major powers in an increasingly contested region."

She did say that this does not mean another "overarching Indo-Pacific institution would replace ASEAN-led broad-based mechanisms," though there have been rumblings about expanding the Quad someday. Subianto's warning shows that the implications of external powers' Indo-Pacific shift are not lost on ASEAN members.

The Indonesian defense minister referred to ASEAN's own Indo-Pacific vision -- the ASEAN Outlook on the Indo-Pacific, or AOIP. The document, unveiled in 2019, promotes maritime cooperation, connectivity, sustainable development and economic collaboration. Centrality comes up again, as the "underlying principle for promoting cooperation in the Indo-Pacific region."

Existing ASEAN-led mechanisms, it says, should be used as platforms for dialogue and cooperation.

The Institute of Asian Studies' Ishikawa sees the AIOP as crucial. Without it, "the Quad and China would face each other directly without a buffer zone," he said, warning this could worsen security and economic risks to ASEAN states.

"If [external powers'] Indo-Pacific visions progressed without ASEAN, and the confrontation with China worsened, that would become a factor of regional instability," Ishikawa added.

Still, many find the AIOP lacking when it comes to specifics. A survey by the ISEAS-Yusof Ishak Institute published in February found about 40% of pundits across the bloc said that "ASEAN needs to articulate its AOIP more clearly in order to stay relevant."

But just when ASEAN needs to come together on a clear common vision, it is being buffeted by crises that threaten to weaken its bonds. 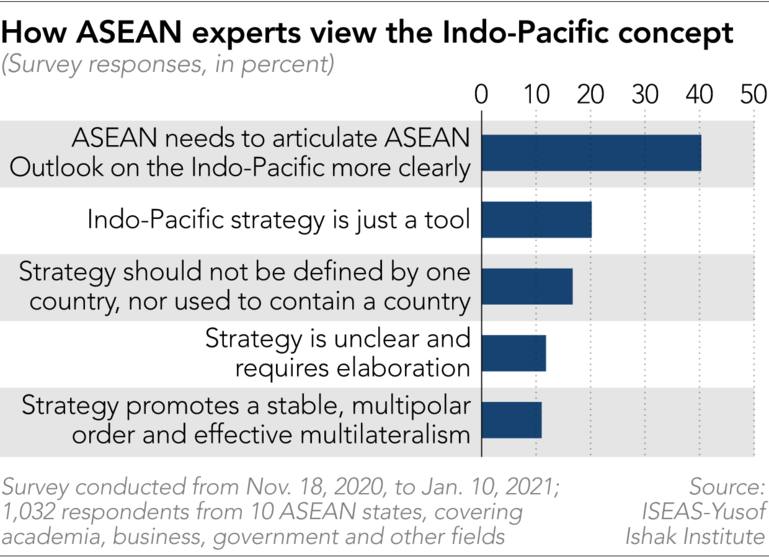 One internal risk to unity, and therefore centrality, is the crisis in Myanmar.

The junta has killed over 870 people since its Feb. 1 coup, according to one rights group. Singaporean Foreign Minister Vivian Balakrishnan laid out the stakes in March, saying, "It is essential for ASEAN's credibility, centrality and relevance to have a view, have a position and to be able to offer some constructive assistance to Myanmar."

At the summit, the leaders agreed on a five-point "consensus" toward a peaceful resolution in Myanmar. Progress on implementation has been slow, however, raising questions about the bloc's ability to follow through. 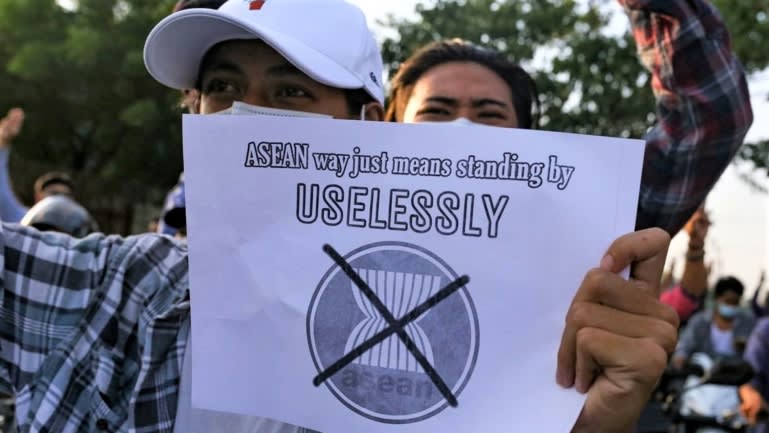 A protester in Mandalay, Myanmar, criticizes ASEAN's response to the junta on June 5. The crisis threatens to tarnish the bloc's reputation.   © Reuters

On top of this, ASEAN's sluggish recovery from the pandemic and some members' struggles to secure enough vaccines may be weakening the bloc's position -- and allowing outsiders to pick at its divisions.

The International Monetary Fund in April downgraded this year's gross domestic product outlook for five key ASEAN economies -- Indonesia, Malaysia, the Philippines, Thailand and Vietnam -- by 0.3 of a point to 4.9%, whereas most other countries received upgrades.

China, meanwhile, has swooped in with offers of support on Myanmar as well as vaccines. The more ASEAN members come to rely on Beijing, the harder it will be to stay centered between China, the U.S. and other external partners.

ASEAN's best hope for maintaining its place in a divided world lies in its economic and cooperative potential, experts say.

"It is necessary for ASEAN to maintain a presence by playing a leading role in regional cooperation using ASEAN-centered frameworks," such as RCEP, Ishikawa said.

Hoang observed, "ASEAN's best strategy is to focus on itself by strengthening its internal cohesion and accelerating intraregional economic integration."