TOKYO -- On a chilly January afternoon in Yokohama, a 25-year-old IT company employee said what much of Japan is thinking: "I'm not expecting my salary and the economy to improve much."

The man has only been in his job for a year, following graduate school. But any excitement he might have felt about this new beginning is overshadowed by fears for the future. How, he wonders, will he cover the expenses that inevitably come with marriage, children and looking after aging parents?

Takahide Watanabe, a 58-year-old at a very different point in his career, struck a similarly somber note. "Companies don't give employees a big pay raise because they don't know what will happen next."

A gloom hangs over the country after years of Abenomics -- Prime Minister Shinzo Abe's program to get the Japanese economy humming again. To an extent, it worked, powering a streak of expansion that lasted more than seven years. But the economy is believed to have contracted in the October-December period -- the results are due next Monday -- as a result of one-off factors such as typhoon damage and the consumption tax increase on Oct. 1.

This raises fresh questions about the economy's resilience just as Japan's longest-serving leader confronts a new threat: the coronavirus originating in China.

The immediate focus is on consumers' response to the tax increase. Economists expected shoppers would pull back in the last quarter, as households tend to make big purchases before a hike. Still, the levy rose a relatively modest 2 percentage points, to 10% from 8%. Surely, many thought, this would not be enough to send the economy into a contraction. Yet, despite generous government spending to offset the impact, a QUICK survey of 17 analysts suggests gross domestic product declined 3.9% from the previous quarter on an annualized basis.

Department stores have taken a beating. Sales have dropped for three straight months, including a 5% year-on-year fall in December, according to the Japan Department Stores Association.

"There has been little sign of a recovery from declining sales of apparel items," said a spokesperson for J. Front Retailing, which runs the Daimaru chain.

An Odakyu Department Store representative said slow sales of "clothing and daily goods are expected to drag on until the spring." She added that the tax increase is not the only factor -- a relatively mild winter and the coronavirus outbreak's effect on tourism are part of the equation.

At consumer electronics retailer Bic Camera, sales of TVs and refrigerators have dropped since the pre-hike rush, though a spokesperson did say "TV demand is coming back ahead of the Olympics" in Tokyo this summer. Department stores in Japan are feeling the chill after recording a 5% sales decline in December. (Photo by Kei Higuchi)

Consumer behavior may be shaped by Japan's decadeslong struggle with deflation.

"Japanese consumers tend to react strongly to any price increase because they are not used to inflation," said Naoki Takayama, assistant professor of economics at Hitotsubashi University and a former government official responsible for national income accounts. "They are very sensitive, even to a very modest shock." Last year, before the tax increase, core consumer inflation ranged from 0.3% to 0.9%.

But sentiments like those of the young IT worker in Yokohama hint at a deeper malaise. Take it from Takeshi Niinami, the president and CEO of spirits maker Suntory Holdings. Japan's economy "doesn't appear to get worse, but neither does it appear to get much better," he said.

New stimulus measures set to take effect in the fall, including a program that will reward My Number social security card holders who make cashless retail transactions, "give me reassurance about the outlook," the Suntory executive added. "But with increases in social security and medical expenses, it would be hard to feel an improvement in the economy."

Those expenses, some say, are the crux of the problem.

Japan's aging population and low birthrate mean that a smaller working-age population will have to support the growing number of seniors. Already, each active worker is beginning to carry a heavier social security burden. For Abenomics, this is a ball and chain.

The Japan Business Federation, which represents the country's largest corporations, argued recently that rising social security insurance payments had eaten away more than 30% of salary increases from fiscal 2013 to 2018.

For 2020, the government lowered the cap on taxpayers' standard income deductions to 1.95 million yen ($17,700), from 2.2 million yen -- a move that will hit workers earning more than 8.5 million yen a year. Meanwhile, although employee pension insurance rates have been held at 18.3% of monthly salaries since 2017, rates for the public health and nursing care insurance systems are expected to keep rising.

The federation's argument, however, brings up a more basic problem: low wage growth.

Pay raises have lagged behind price and tax increases, leaving real wages down 3.5% from 2012 to 2018, labor ministry data shows. This is despite an unemployment rate that, at 2.2%, is at a 27-year low.

This disconnect between wages and unemployment -- which are supposed to show an inverse relationship -- has long been a source of puzzlement for economists and concern for policymakers. But changes in the makeup of the workforce offer clues.

Large corporations, faced with a shrinking Japanese market, have sought to reduce the costs of their domestic operations. One way to do this is to increase temporary workers while reducing expensive "lifetime" employees.

In addition, as older workers reach the retirement age of 60, many wish to remain in the labor force. But this usually means taking a temporary position with much lower pay. So while the overall number of employees in Japan actually rose by 4.5 million from 2013 to 2019, hitting 56 million, nonregular employees accounted for 2.5 million, or 57% of the increase. These workers total 21.7 million, or 38% of all employees.

The growing ranks of nonregular workers puts pressure on average nominal wages, which remain 13% below their peak in 1997. From 2012 to 2018 nominal wages grew only 2.6%, labor ministry figures show. 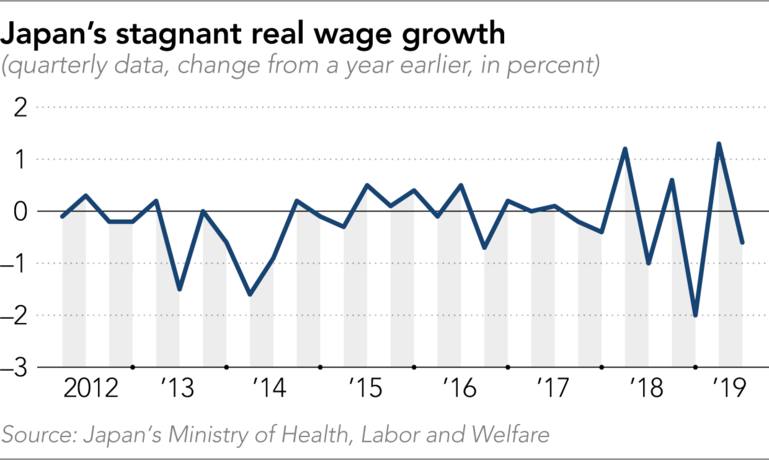 "Japanese corporate managers have responded to shareholder pressure by reinforcing the dual labor structure, as they have struggled to increase profits through product innovation," Kono said. The growing influence of shareholders has spurred many executives to chase short-term returns through cost cuts, he added.

"Reserves," Kono said, "are piling up in Japanese companies."

Even when workers do land a better-paying position, it is difficult to shake their sense of insecurity.

"My hourly wage has increased after changing my job," said a woman in her early 40s who asked to be identified by her surname, Yoshida. She is unmarried and lives alone. Her parents have already passed away. "After the consumption tax hike, I think more carefully before I make purchases. 'Is this something I really need?'" she said. "I'm saving money in case something happens because I have to take care of myself. I am worried because the economy doesn't look good."

If traditional companies cannot break this impasse, might the "third arrow" of Abenomics -- deregulation -- offer hope?

This arrow is aimed at spurring innovation, startups and new industries. But economists and entrepreneurs are skeptical.

They say the effort to trigger industry disruptions has been halfhearted at best. The government, apparently, is wary of economic instability and reluctant to create losers as well as winners. 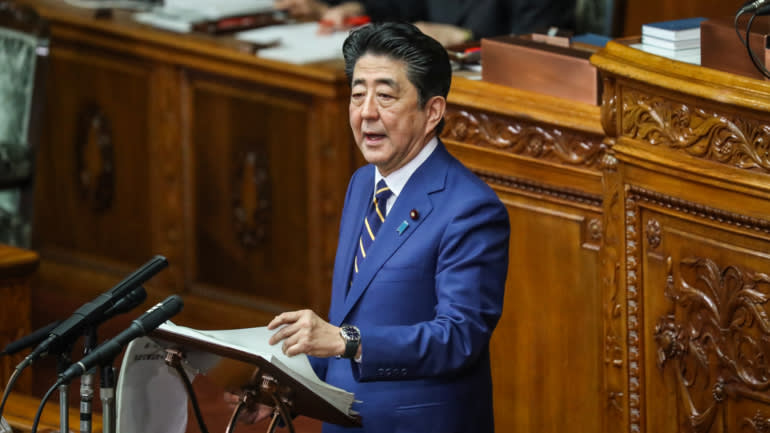 Japanese Prime Minister Shinzo Abe addresses parliament on Jan. 20. He has pledged to remodel the country's social security system to make it more attuned to the needs of the aging population. (Photo by Uichiro Kasai)

Instead, the Abe government has doubled down on the traditional tools of monetary easing and fiscal stimulus.

In December, the government unveiled 13 trillion yen worth of extra spending to support economic growth. In January, it nominated an advocate of aggressive monetary easing to the BOJ board.

And while true structural change remains elusive, the coronavirus outbreak has emerged as a serious danger to the economy. The Dai-ichi Life Research Institute estimates that the drop in travel demand alone will reduce Japan's GDP.

That is just one more reason for the nation's workers to tighten their belts.

"Japanese consumers aren't confident enough about economic growth to be able to shrug off tax increases or inflation," said Takayama, the Hitotsubashi University economist. "They can't afford to be so generous when their salaries aren't expected to go up much."