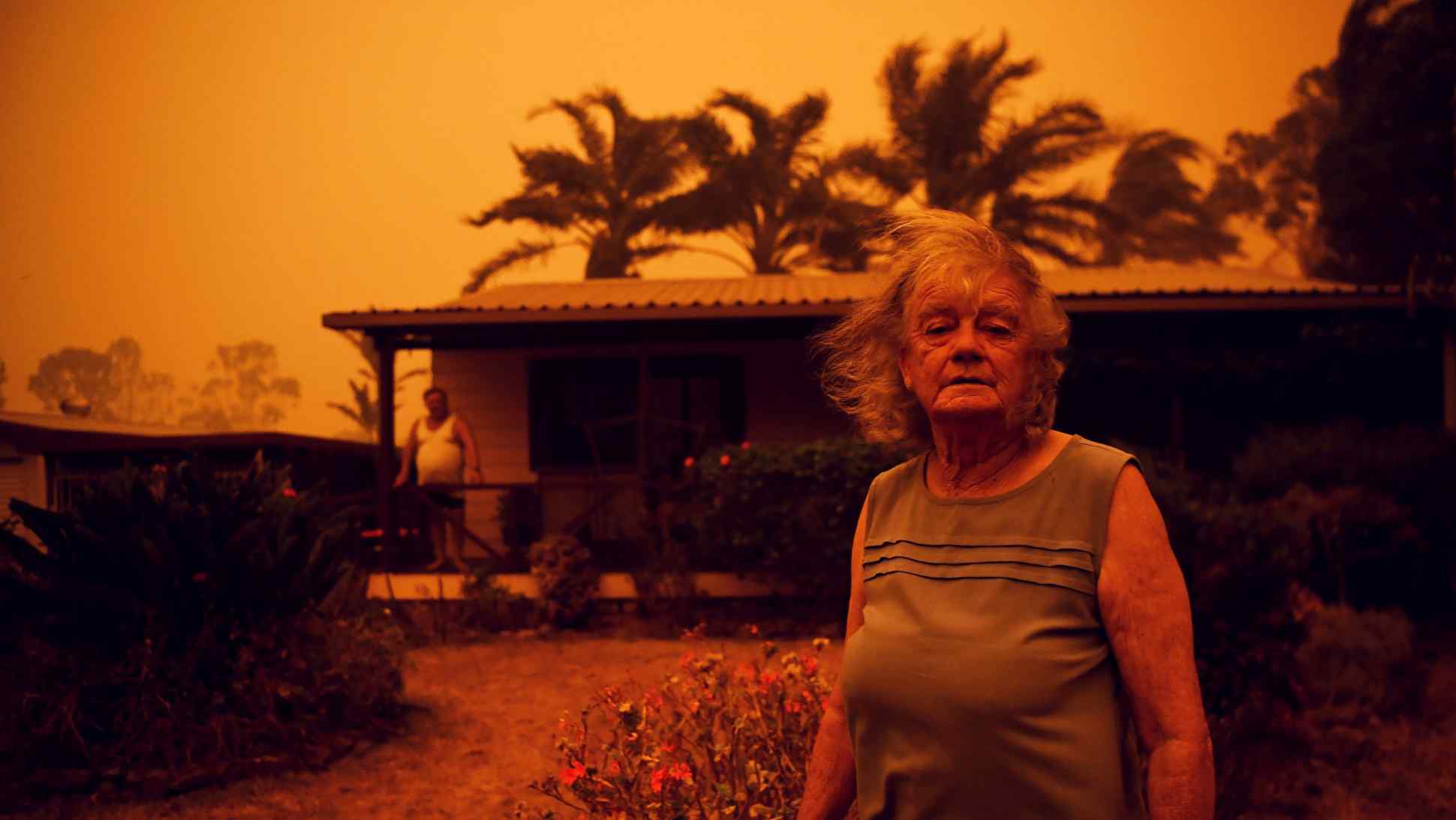 A couple outside their home in New South Wales in January: A state inquiry found that climate change was "clearly" a factor in last season's devastating fires.   © Reuters
Asia Insight

Climate change spurs race for new strategy: 'We have to be better'

SYDNEY -- Orange skies, falling ash, smoke creeping into lungs, mobile phones pinging "fires near me" warnings, people seeking shelter on beaches as infernos rage inland -- these memories are rushing back as Australians brace for a possible repeat of the disastrous 2019-2020 "Black Summer" of bushfires.

The Australian summer is still three months away, but in the hard-hit state of New South Wales, Rural Fire Services chief Rob Rogers has already warned residents to update their survival plans. Professor David Bowman, a bushfire expert, says he cannot dismiss the possibility of another bad season despite the heavy rains and floods that broke a long drought across much of the nation earlier this year.

"We are in a new climate regime, so we don't really know," Bowman, director of the Fire Center Research Hub at the University of Tasmania, told the Nikkei Asian Review. "I wouldn't rule out a big fire season ahead. That is diabolically depressing, but when you see what is happening in California, Europe and elsewhere, we are just part of a global nightmare."

The last season was nothing short of nightmarish. The fires claimed 34 lives directly, with hundreds more deaths attributed to smoke. Billions of animals were killed or displaced, while 10,000 homes and outbuildings were burned. Flames swept through an area more than twice the size of Japan's island of Hokkaido.

Now some experts are calling for a radical overhaul of the way Australia prepares for, monitors and fights fires -- an endeavor that may prove instructive for other parts of the world grappling with their own climate-related natural disaster risks.

Bowman is the lead author of a new report urging the creation of a national bushfire monitoring agency. "We need better data," he said. "We need better everything. It requires a massive investment."

He insists he is not being alarmist when he says Australia "will get clobbered again." His biggest worry, he said, is that the fires could escalate into a suburban disaster with even heavier casualties. Already, federal, state and territory governments between them spend about 4 billion Australian dollars ($2.94 billion) a year fighting bushfires. They rely on around 20,000 professional firefighters and more than 150,000 volunteers, who serve mainly in rural areas.

But in dramatic newspaper advertisements, a group of former fire and emergency service leaders recently warned: "The bushfire threat has escalated. So must our response."

They want faster detection of and responses to new outbreaks, better aerial firefighting capability, better use of the defense forces, creation of an Indigenous-led "cultural fire strategy" to help manage fuel loads and stronger wildlife recovery efforts. Above all, they call for a national climate change strategy that includes a commitment to net zero emissions, more aggressive 2030 emissions reduction targets and a phase-out of all fossil fuels.

The group, called Emergency Leaders for Climate Action, has been working on a plan with input from more than 150 experts and affected community members. "Climate change has pushed us into a new bushfire era," the leaders said on July 31. "Now we need a fundamental rethink of how we prepare for and manage the bushfire threat."

It is a view that resonates with Anthony Taylor, president of the volunteer rural fire brigade in the small seaside town of Tathra, about 400 km south of Sydney.

"We have to be better, because with climate change people know that the fire season will be longer and the intensity of the fires will be greater," he told Nikkei. Taylor, 69, has seen his share of bushfires and said, "It's a different ballgame now."

A report released last week by the state of New South Wales agreed that global warming "clearly played a role in the conditions that led up to the fires" that ravaged Australia from September 2019 to March 2020. While the report said there is no "silver bullet" to counter the threat, the state intends to adopt all 76 of its recommendations, which include enhancements to bushfire research, training and preparedness.

A national inquiry into the causes and consequences of the fires is due to be released by Oct. 28. Interim observations announced on Monday found that the 2019-2020 season showed bushfire behavior had become more extreme and less predictable, and that catastrophic conditions might become more common. Suggestions included stress-testing disaster plans, such as evacuation and sheltering options, and more research into whether Indigenous land and fire management techniques used in northern Australia could be employed in the south.

The observations also touched on beefing up mobile broadband capabilities to give first responders better access to video, images, location tracking and other data.

Far more people could have been killed last season without the brave efforts of firefighters. Three of the dead were American firefighters whose C-130 water bomber aircraft crashed in the Snowy Mountains on Jan. 23.

The full economic cost has yet to be determined but runs into tens of billions of dollars in lost income and productive capacity. On top of that comes the rebuilding of more than 3,100 houses, the repair of damaged infrastructure such as power lines, and replacements of fire trucks and equipment. The housing cleanup has been slow in some places, leaving people living in tents, caravans and container-like makeshift dwellings.

That is despite the federal government allocating AU$2 billion to a recovery fund, plus contributions from state governments, backup from grassroots community organizations such as the Salvation Army and the Red Cross, and celebrity fundraising.

The prolonged relief effort hangs over Prime Minister Scott Morrison and his conservative Liberal-National coalition government, as does the perception that he ignored early warnings of a bad fire season and has not done enough to mitigate the effects of climate change. Indeed, federal and state authorities have faced criticism that they failed to make adequate preparations even when it was clear the drought and a vegetation buildup had created potentially catastrophic conditions. Morrison's reputation also suffered when he took his family on holidays to Hawaii at the peak of the bushfire crisis in late December, and he lost further ground with his awkward handling of a "meet the people" visit to southern New South Wales in early January.

Still, there is no federal election due until May 2022, and the COVID-19 crisis has diverted some of the political pressure while changing the country's overall economic expectations. An estimate in March by Treasury Secretary Steven Kennedy that the bushfires would trim 0.2 percentage points from gross domestic product growth has been lost in the much larger coronavirus impact.

There is no doubt that the wildlife cost was enormous. On South Australia's Kangaroo Island, at least half its 50,000-strong population of koalas are thought to have died in January. About 350 km north of Sydney, up to 1,000 koalas perished when fires ripped through bushland near the coastal town of Port Macquarie last November.

A traumatized and badly burned koala named Paul -- the first animal rescued there and taken to the Port Macquarie Koala Hospital -- became the international face of the wildlife recovery effort. But on June 28, he succumbed to his injuries and became one more grim statistic from a fire season that may have killed or displaced 3 billion animals -- mammals, reptiles, birds and frogs -- according to a July 28 report by the World Wide Fund for Nature. 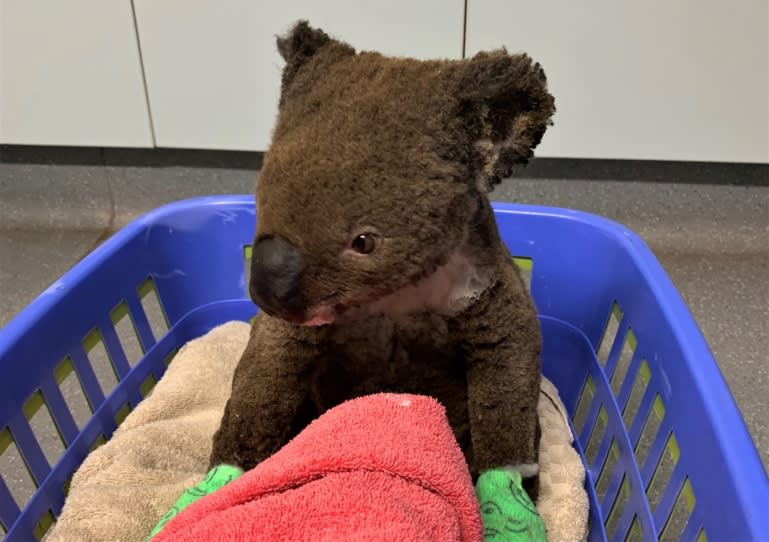 "Paul's death was devastating for the staff and volunteers at the hospital," said Sue Ashton, president of Koala Conservation Australia. "We had cared for him for eight months and felt he was going to make it despite his horrendous injuries."

The growing fire risk compounds a larger danger to koalas: A report to the New South Wales parliament in late June warned that wild koalas face extinction in the state before 2050 unless there is urgent government intervention to protect their habitat.

Likewise, for people living in fire-prone areas, the prospect of another crisis is only fueling anxiety after this year's string of disasters. In February, floods ravaged many of the worst-affected communities, quickly followed by the uncertainty, dislocation and economic pressure stemming from COVID-19 containment measures imposed in March.

Residents of Tathra, population 1,700, are steeling themselves for the challenges ahead.

Throughout December and January, Tathra's volunteer firefighters toiled in the summer heat, helping where needed along the coast as fires raced through valleys and cut the main highway in multiple places. Taylor, the brigade president, recalled how hard it was to breathe as Christmas rolled into the New Year. "You couldn't see the sun. It was eerie," he said. "At that time of the year, the swifts are usually active, swooping around as they look to nest. I remember seeing them just sitting on a fence -- they were so confused by the whole situation." Australian soldiers look out over burned trees and a beach where people had taken shelter from the flames over New Year's.   © Reuters

Tathra, which had lost 65 houses in a March 2018 bushfire, was spared the worst of the 2019-2020 season. Instead, it provided a haven for scores of holidaymakers who were hemmed in by surrounding outbreaks. About 50 km further north, the highway town of Cobargo was not so lucky. By the early hours of Dec. 31, its main street was alight, and many houses and nearby farms were destroyed. Three people died there, and a visit to the town by Morrison on Jan. 2 saw raw emotions spill into a hostile reception from some residents.

Last season's death toll was not Australia's worst, but the scale and intensity was unprecedented. Officially, the Australian summer does not start until Dec. 1, but New South Wales has issued its first bushfire alerts, warning six northern regions on Aug. 1 they were entering the danger period.

Rogers, the Rural Fire Services chief, cautioned against complacency, saying that fires could strike at any time and that it was "vitally important" for householders to be prepared. He posed questions all Australians need to answer as summer approaches.