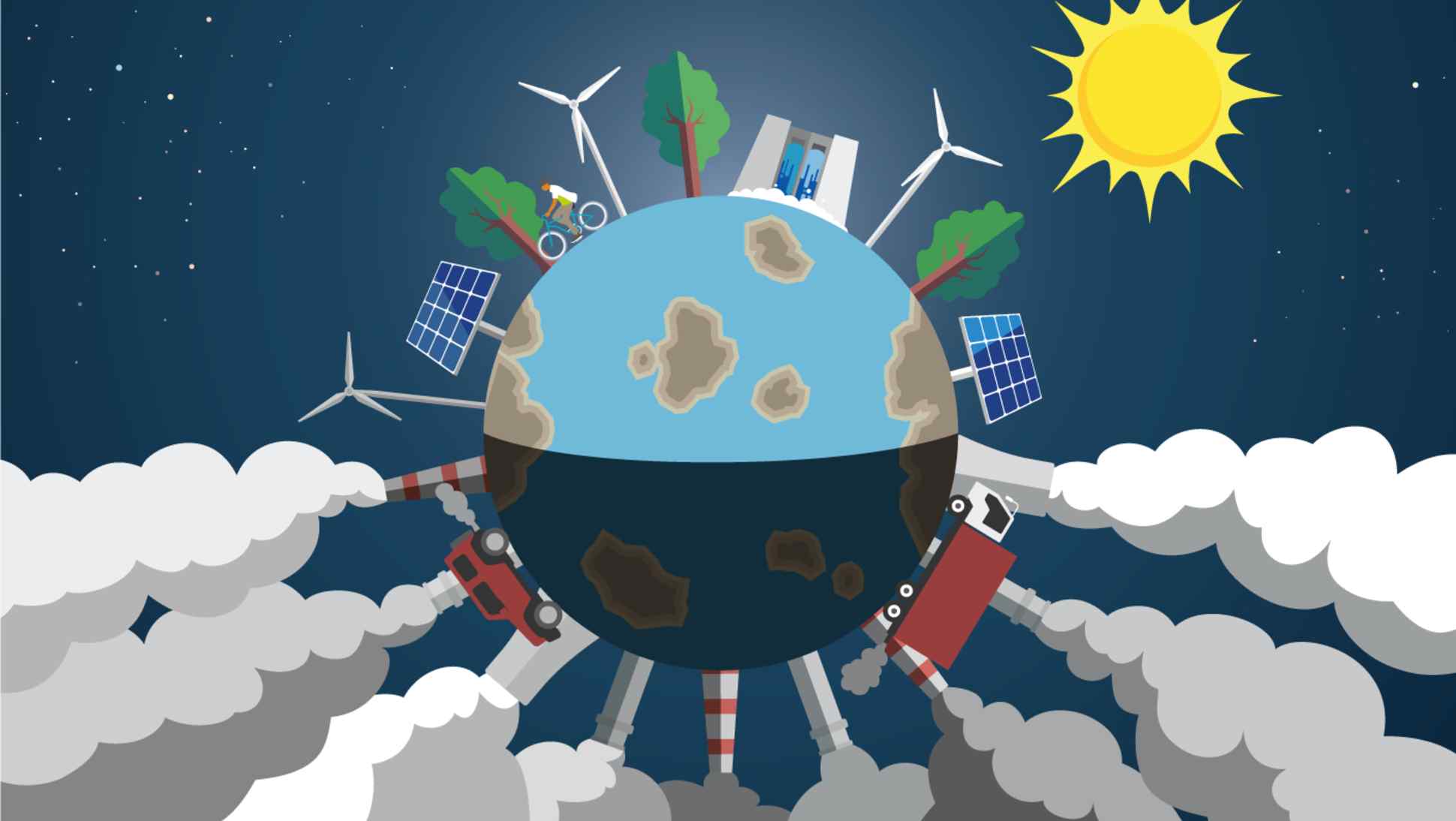 The pandemic-induced slowdown may offer the Asia-Pacific region a prime opportunity not only to catch up on environmental targets, but also to lay the groundwork for a greener future. © Illustration by Hiroko Oshima
Asia Insight

Except in South Korea, experts see absence of environmental resolve in region

TOKYO -- When it comes to leading on climate change, many have greener credentials than Thai Prime Minister Prayuth Chan-ocha.

But at a regional United Nations' gathering late last month, where a handful of Asia-Pacific leaders delivered video messages, Prayuth encouraged member states to "build back better," calling for a reset of national economies toward environmental and social sustainability.

"The COVID-19 crisis has gravely impacted national and global economies," the former general told the United Nations Economic and Social Commission for Asia and the Pacific, or ESCAP. "It will also affect our endeavors to achieve the sustainable development goals, or SDGs. But in every crisis lies an opportunity."

Asian governments are throwing historic sums of stimulus money into industrial output, consumption, employment and tourism to steer economies through the crisis. Massive government spending successfully lifted the world out of the global financial crisis more than a decade ago, but left income distribution, structural reform, and environmental protection out of the equation. Experts warn against making the same mistake now and see particular urgency -- and long-term benefit -- in investing to heal the planet.

"Recognizing the immediate need to generate jobs, you also have to look at whether measures do not lock you into a high-carbon future," said Milag San Jose-Ballesteros, director for East, Southeast Asia, and Oceania at the C40 Cities Climate Leadership Group, an international consortium of local governments. The coronavirus crisis hit when the Asia-Pacific was already behind on meeting its 2030 targets under UN Sustainable Development Goals. Despite progress in education and affordable clean energy, an ESCAP interim report in March warned of regional regression in the areas of sustainable consumption and climate action.

The slowdown caused by the pandemic may give the region a prime opportunity not only to catch up on environmental targets, but also to lay the ground for a green transition.

"This has to be the beginning of our region's decarbonization," said Kaveh Zahedi, ESCAP's deputy executive secretary.

Because the pandemic has halted travel, manufacturing and other carbon-intensive activities, global emissions are expected to decline by 8% this year. To prevent a larger rebound in emissions as economies recover, ESCAP recommended taking advantage of current low energy prices to phase out fossil fuel subsidies. Such savings could finance blockbuster stimulus packages in the region and create 14 million new jobs, it says.

But despite encouraging words by politicians such as Prayuth, the regional report card on green transition falls short of its potential.

Even Thailand's three stimulus packages worth a combined $76.2 billion have yet to pave the way for a green transition, the UN Resident Coordinator in Bangkok said in a report earlier this month, stressing the country "should harness low-carbon investment opportunities to reboot the economy."

Attempts to remake the regional economy into a greener model are moot without China, the world's largest user of coal and emitter of carbon dioxide. To revive the national economy, Beijing is accelerating plans to invest $1.4 trillion in seven fields of "new infrastructure" including high-speed rail and electric vehicle charging stations. That would be a departure from China's recovery during the 2008 global financial crisis, when a $566 billion stimulus was pumped into carbon-intensive "old infrastructure" such as highways, bridges and airports.

"It's better than the traditional reflex of policymakers, but it's also not perfectly green," Jorrit Gosens, research fellow at Australian National University's Centre for Climate and Energy Policy, told the Nikkei Asian Review.

Despite Beijing's language, concrete plans and investment pledges for each of the seven areas depend on provincial governments. The central government, however, has a large sway over the region's green progress because of its massive Belt and Road Initiative. A coalition of environmental groups in April asked China's finance minister to use the coronavirus economic lull to reconsider BRI projects that may harm the planet, such as coal plants and dams.

"The Chinese economy is hurting quite a bit," Gosens added, "so they might reconsider those investments abroad that have the poorest return on investment."

But any slashing of projects may not necessarily align with what environmental advocates have in mind. "That has everything to do with local politics," said Gosens. "For the Chinese, they don't have a very strong opinion about what these countries choose to do."

In Vietnam, which has eight China-backed coal plants under construction according to Greenpeace data, authorities are using the need for economic recovery to push projects that may be harmful to the environment.

On June 12, the government in Hanoi led by Prime Minister Nguyen Xuan Phuc signed off on a $9.3 billion coastal resort led by Vingroup, the country's largest private conglomerate. Vingroup had to wait years for approval as civil society groups and environmental activists warned of risks to a biosphere reserve described as a "green lung," which protects against air and water pollution. Experts say extensive land reclamation will have profound environmental impact on Ho Chi Minh City as well in the Mekong Delta.

"The pandemic provides perfect cover for the approval," a Vietnamese environmental activist based in Ho Chi Minh City said when learning of the government's green light. A directive from the Vietnamese Communist Party's Politburo in late May sought an "immediate" start to "large-scale and important projects that have spillover effects on socioeconomic development of localities, regions, and industries."

In contrast, South Korea appears to be taking the lead on environmental transition despite the dominance of the highly polluting steel, automobile, and oil refinery industries.

In early June, the government unveiled a budget that will allocate 31 trillion won ($25 billion) for an ambitious "green new deal" through 2022. Although specific targets and timelines will be unveiled in July, the three-year plan includes a "green" remodeling of public facilities, buildings, housing and manufacturing bases expected to create 550,000 jobs.

President Moon Jae-in proposed the plan before national legislative elections in April, when a landslide victory for his Democratic Party ushered in new parliamentarians pushing for climate action.

"At first the government's recovery plan focused on going digital, but NGOs and experts said we need to add a green new deal because COVID is also linked to climate issues," said Yujin Lee, a researcher at Korea's Institute of Green Transition. Scientists say economic activities invading wildlife areas increase human contact with animals that could transmit viruses like COVID-19.

Quieter measures are included in Japan's economic stimulus, which has now ballooned to $2.1 trillion or 40% of gross domestic product. A total of 8 billion yen ($74 million) in subsidies will finance installation of energy-efficient ventilation systems in public spaces including restaurants and hotels, and construction of factories powered by renewable energy for companies bringing overseas manufacturing bases back to Japan. Another 3 billion yen was set aside to maintain Japan's extensive national parks -- and industries and businesses dependent on them -- until foreign visitors can return.

Various domestic interests are competing for the Japanese government's ear. The Ministry of Environment sets climate policy, but the influential Ministry of Economy, Trade and Industry oversees national energy strategy. The incongruity of the country's Paris Agreement commitments and continued financing of coal power projects has become a source of embarrassment for Environment Minister Shinjiro Koizumi during international climate change conferences.

"The Japanese government has been holding hearings with industries like the airlines and tourism, which is good because they have suffered from the crisis," said Kazue Suzuki, spokesperson for Greenpeace Japan. "But they also need to hear voices from NGOs that are tackling climate change because it is a crisis that we cannot wait to take measures on."

While national governments are prioritizing economic recovery, the C40 Cities Climate Leadership Group, which includes the leaders of Seoul, Hong Kong, and Quezon City in the Philippines, have signed a pledge to "build a better, more sustainable and fairer society" through coronavirus recovery plans.

"In most cases, cities can make changes quite fast" compared to national governments, said the group's Ballesteros, describing how they can implement tangible policies such as updating sustainability requirements in building codes and subsidizing the retrofitting of old structures. Changes can even be as simple as promoting cycling and creating dedicated lanes.

"It provides what you need in terms of safe distancing as well as exercise, and then of course it means less pollution too," Ballesteros said. Habits acquired in quarantine such as working from home could be viable long-term alternatives, reducing emissions from transportation and overhead costs for companies, she added.

South Korea's capital Seoul is planning its own local green new deal, concentrating on remodeling public buildings and housing to create jobs and reduce emissions, 70% of which are produced by cooling and heating systems in buildings.

As the coronavirus crisis is far from over, further stimulus is expected from national governments. And there is much left to be done for long-term environmental measures. ESCAP's analysis of economic recovery plans by 49 governments showed improvements in social protections, but, says Zahedi, "what we've seen less of in the stimulus is investment in the planet."

Yuta Okazaki, director of the policy coordination office at Japan's Ministry of the Environment, told Nikkei that more sustainable recovery initiatives can be expected in the 2021 annual budget due by the end of September. The ministry is consulting with European counterparts on green stimulus policies. France's aid to Air France-KLM, for example, is contingent on reducing short-haul flights and a 50% reduction in carbon emissions by 2024. Austria and Germany have leveled the same conditions on Austrian Airlines and Lufthansa, respectively.

Even for Singapore, a country where stimulus measures have produced immediate social and business protections, ESCAP recommends folding sustainable or climate-resilient investment criteria into loans for enterprises.

Once the immediate challenges of the pandemic are addressed, experts hope governments can focus on structural green reforms.

"Maybe until now, some of these investments have been presented as unaffordable," said Zahedi. "Given that stimulus packages range from 0.1 to 20% of GDP, clearly there is fiscal space to make these much needed investments."