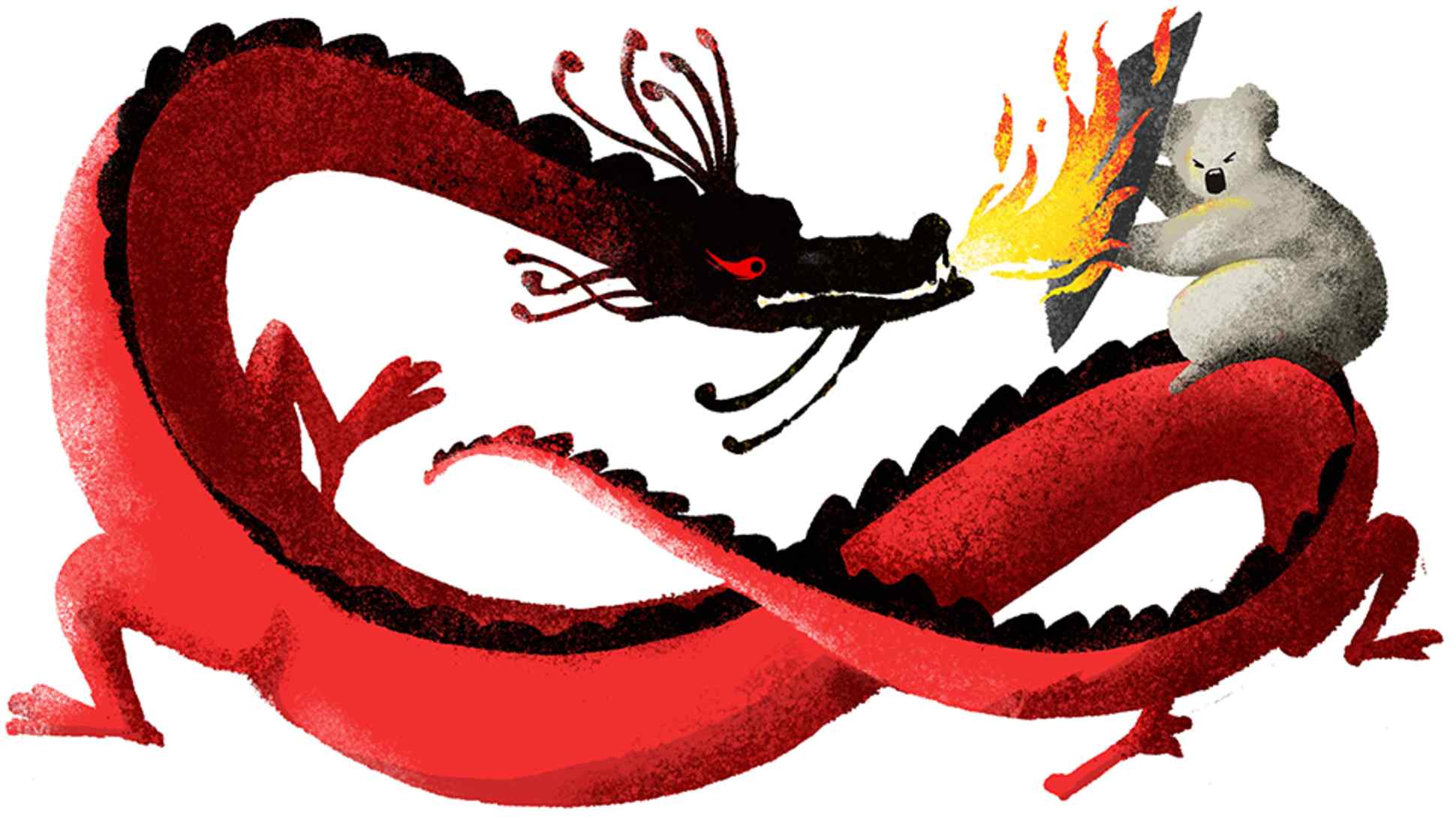 SYDNEY -- It is, perhaps, the question of the 21st century. How can countries foster mutually beneficial relations with an increasingly powerful China, without bowing to Beijing's coercion?

The question looms largest in Australia. China is the country's No. 1 trading partner, but Canberra is pushing back hard against alleged Chinese political interference and investments in sensitive infrastructure. Other countries are watching to see what blowback Australia encounters.

"Australia is leading the United States in its awareness of and responses to Chinese political warfare and economic statecraft," said Tom Mahnken, a former deputy assistant secretary of defense for policy planning under President George W. Bush and now the head of the Center for Strategic and Budgetary Assessments. "The Australian government has been forced to come to grips with the challenge of Chinese investment in infrastructure and key industries, and attempts to manipulate elite and public opinion."

The next test is Huawei Technologies' bid to participate in building Australia's 5G wireless network. Huawei's involvement, widely seen as a national security risk, is "a difficult decision but most likely will be blocked," said Michael Shoebridge, director of strategy and defense at the Australian Strategic Policy Institute, a think tank partially funded by the Department of Defense. 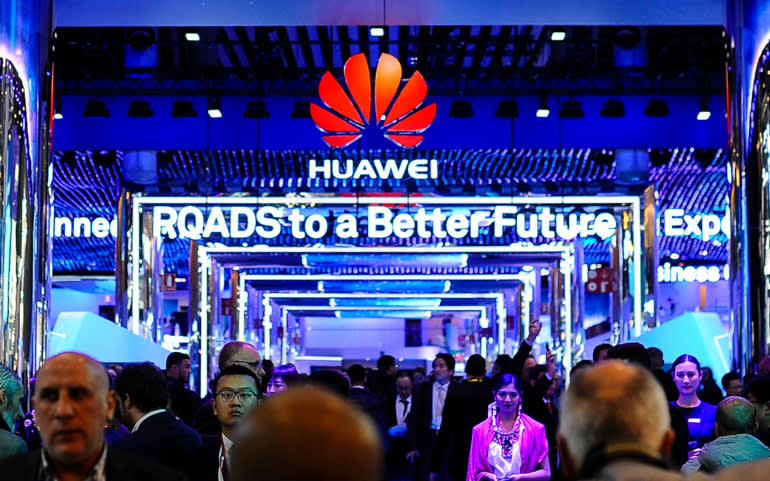 Huawei is the world's largest telecom equipment supplier and No. 3 smartphone maker. Since the company faces strong resistance in the U.S., it needs to penetrate other markets like Australia. But the intelligence law, implemented last year, casts suspicion on Chinese businesses operating abroad.

Article 7 states that "all organizations and citizens" must "collaborate in national intelligence work" and guard any secrets they are privy to. In return, the state will "protect" these individuals and organizations.

Put another way, even "private" entities like Huawei could be agents of Beijing.

John Lord, chairman of Huawei Technologies in Australia, insisted to reporters that the "law has no legitimacy outside of China." Shoebridge suggested otherwise, saying he finds it hard to believe Chinese law "wouldn't dominate" over local laws.

Huawei has been under heavy scrutiny in Australia for years. In 2012, the company was banned from participating in a national broadband tender. More recently, Huawei was in effect blocked from constructing an undersea internet cable connecting Sydney with the Solomon Islands, along with a domestic network for Papua New Guinea. 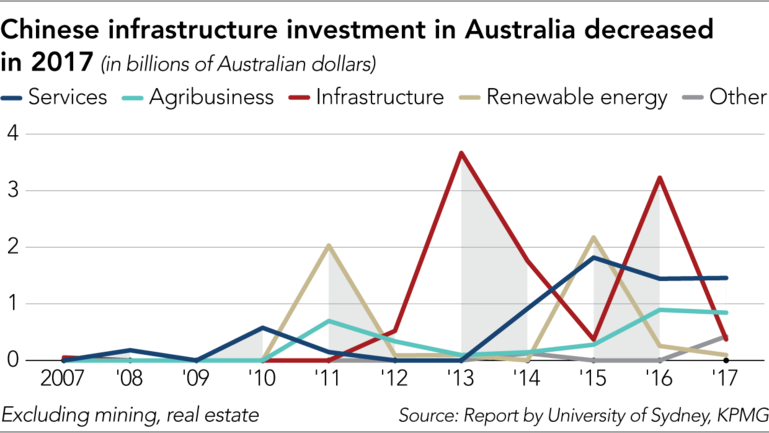 Another imminent decision could underscore Canberra's distrust of China.

Shoebridge said there is a "fairly high chance" this investment will not fly, either. With Hong Kong increasingly under Beijing's thumb, the intelligence law is seen as a potential factor for CK Group as well.

By many accounts, Sino-Australian ties have never been worse.

The relationship took a downturn in 2015 after a Chinese company was granted a 99-year lease for the Port of Darwin, a strategic point hosting a U.S. Marine Corps rotation. The previous year, a partnership including a Chinese state company won a 98-year lease to the Port of Newcastle, the world's biggest coal export terminal. These and other deals fueled a sense in Australia that too many sensitive assets were falling into Chinese hands.

China's State Grid and CK were subsequently blocked from buying power infrastructure. Investment protections were extended to agriculture and real estate. Turnbull has also sought to blow the cover off suspected Chinese meddling in domestic politics, and his center-right government has initiated legislation to force transparency regarding foreign donations and lobbyists.

The enmity appears to be deepening, with a near-freeze on diplomacy. 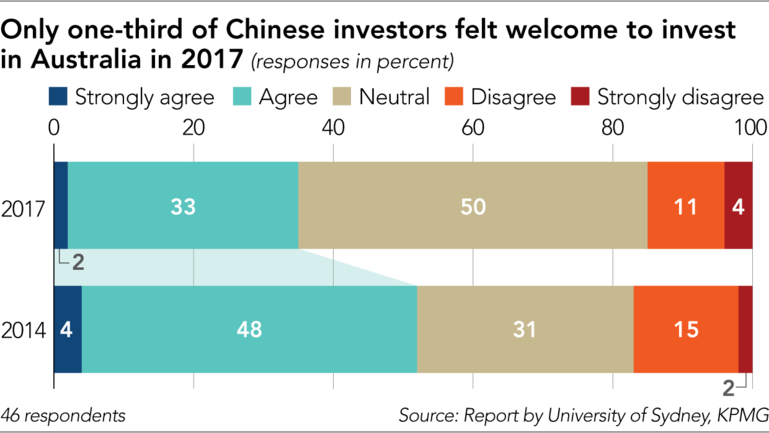 Turnbull is due to meet Premier Li Keqiang in China this year under an agreement on annual reciprocal state visits, but there is talk that the trip could be delayed. Their last such meeting was now over a year ago, in March 2017.

Australian Foreign Minister Julie Bishop has not been to Beijing in two years, though she did meet with her Chinese counterpart, Wang Yi, on the sidelines of the Group of 20 in Argentina in May. Australian Trade Minister Steven Ciobo went to Shanghai that month -- the first ministerial-level visit approved in eight months, according to Chinese state media -- but was unable to set up a meeting with his counterpart in Beijing.

The flow of money from China has been drying up as well. A report from the University of Sydney and KPMG shows the value of infrastructure investment from China dropped 89% on the year in 2017. Investment excluding the traditional priority sectors of mining and real estate decreased for the first time in four years, falling 11% to $10.3 billion.

Other apparent repercussions include slower Chinese customs clearance for Australian farm products and a personal safety campaign thought to discourage students from studying abroad in Australia.

The tensions have also taken a toll on business sentiment, according to a survey of nearly 50 Chinese executives in Australia. The poll, conducted earlier this year, found that only a third of respondents felt welcome to invest in Australia, down from about 50% in 2014.

Seventy percent said the political friction had made them more cautious about investing in Australia.

Blocking Huawei's 5G bid would add to the resentment.

"We are concerned about these reports," Hua Chunying, a spokeswoman for the Chinese Foreign Ministry, said of Huawei's likely exclusion. Insisting the government always ensures Chinese companies follow local laws and norms, she told reporters, "We hope that the relevant party could observe the principles of objectivity and nondiscrimination, level the playing field for Chinese enterprises' normal business activities, and contribute to realizing mutual benefit, instead of the contrary." But how much worse could the relationship become? Economically, Australia and China need each other.

Though rejected deals make the headlines, about 99% of Chinese investments in Australia are accepted, ASPI’s Shoebridge noted. Only a few projects with strategic importance have been made off-limits.

The investment decline is partly due to the limited amount of attractive Australian infrastructure left to invest in. China's own capital controls are also partially responsible: The country's global overseas direct investment fell by 26% last year, as the government works to stop Communist Party elites from moving their assets abroad, mostly through property acquisitions.

With Beijing busy fighting a trade war with the U.S., alienating other countries might not be the best move.

"Under the current international situation, China needs friends rather than enemies," said Stephen Wong Yuen-shan, a lecturer at Chinese University of Hong Kong. 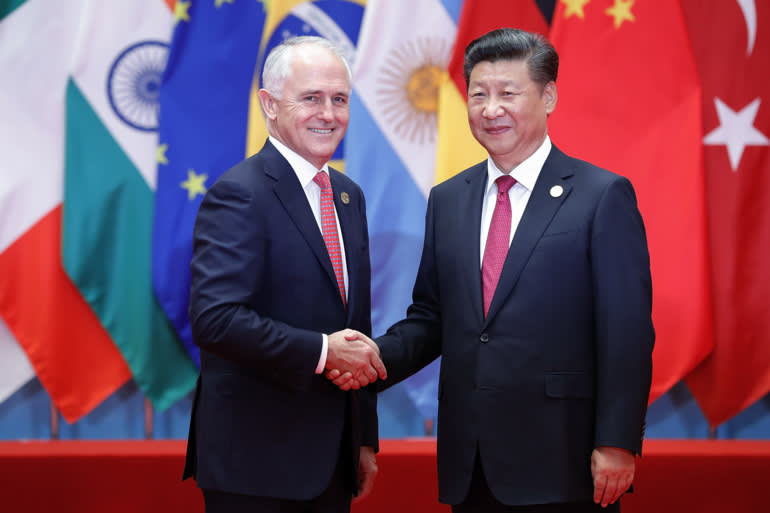 Australian Prime Minister Malcolm Turnbull and Chinese President Xi Jinping meet at a G-20 meeting in 2016. Turnbull is due to go to China this year for an annual reciprocal state visit but the trip could be delayed.   © Getty Images

While Wong acknowledged that China will be very unhappy if Australia slams the door on Huawei, he suggested Beijing would be more likely to try to improve the status quo than to retaliate -- though that could change if the trade war escalates and the U.S. pulls Australia into its camp.

"It's difficult to predict what would happen then," Wong said.

Joshua Kurlantzick, senior fellow for Southeast Asia at the Council on Foreign Relations, said there are limits to what Turnbull can do without risking the economic relationship. Noting how 30% of Australian exports go to China, he said: "I don't see how much further Turnbull can possibly push it ... it's a very tenuous balance."

But Kurlantzick also said China is "certainly capable of having somewhat challenged diplomatic relations with countries while having close economic relationships."

More squabbling looks likely in the short term, at least. In September, Australia and New Zealand are set to propose an enhanced security arrangement at the Pacific Islands Forum in Nauru -- a thinly veiled effort to check China's growing influence in the South Pacific. Beijing is unlikely to take kindly to this.

After Bishop suggested that Chinese investment is saddling Pacific nations with unsustainable debt, Hua fired back on July 18.

"Can they name one example with specific details as to where, when and how China caused unsustainable debt?" Beijing's spokeswoman said. "Do they really think that they can simply count on using 'maybe' to justify their groundless speculation, prejudgment and irresponsible accusations?"

Often, with China, frayed relationships only recover when the other government changes. So the outlook could hinge on whether Turnbull and his government secure another three-year term in the upcoming general election.

But either way, Shoebridge argued the countries have the basis "for a good working relationship despite the clear and material differences."