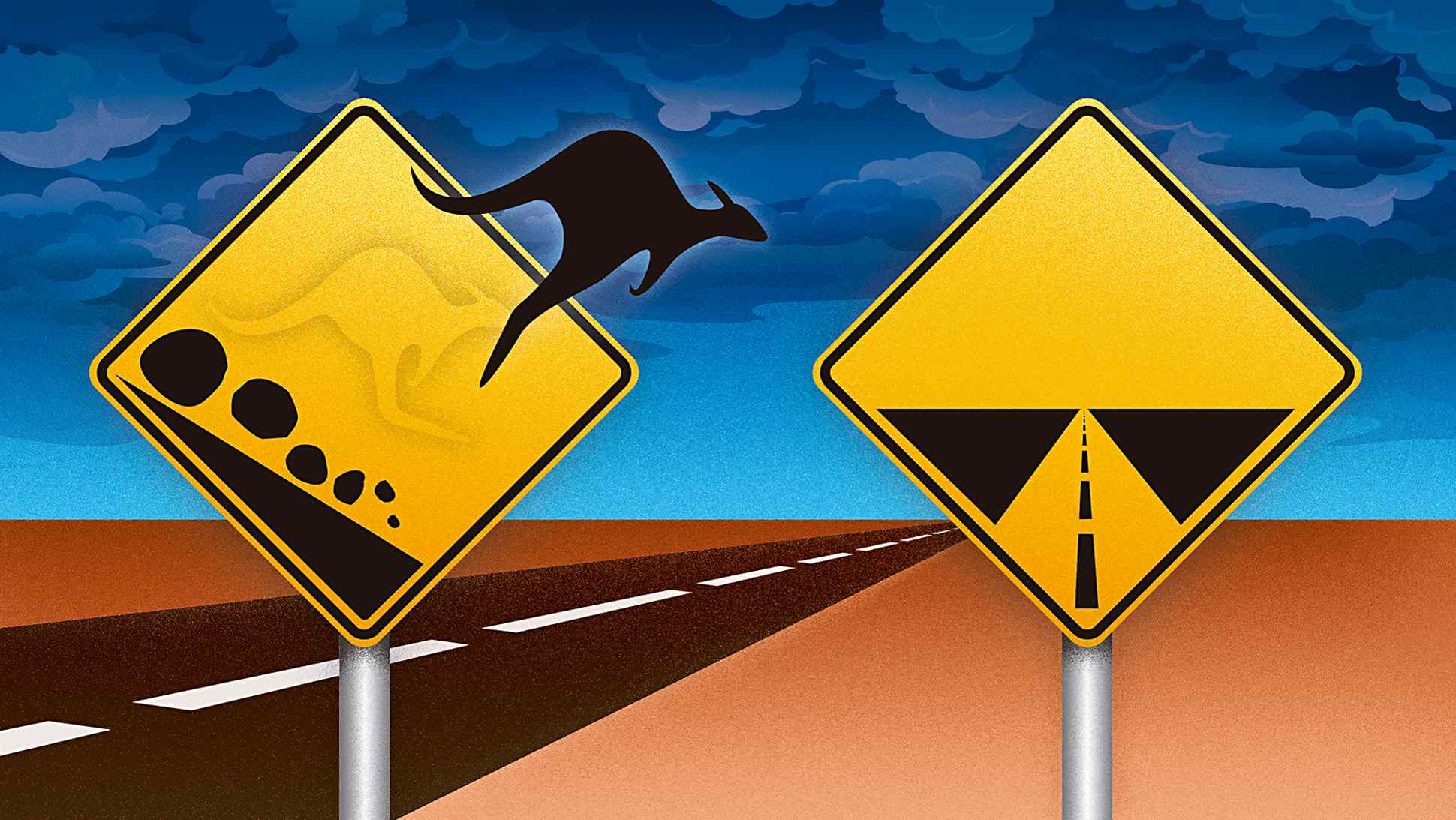 After 27-year growth run, the economy is weaker than it seems

SYDNEY/TOKYO -- Aisha, the 31-year-old owner of a Sydney investment property, had a wake-up call when three of the country's four major banks abruptly raised mortgage rates this month.

"Thoughts turn to selling," she said, fearing unpayable interest and a further slide in property prices, as the country's once red-hot housing market cools. A single mother who recently lost her job as a hospital administrator, Aisha has cut expenses by canceling her private health insurance, stopping subscriptions and switching to a cheaper mobile phone contract.

Like many Australians, Aisha tried her hand in the real estate market after watching house prices surge for years. The "lucky country" has been blessed with a record 27 years of continuous economic growth, largely fueled in the past decade by Chinese demand for its natural resources. But, lately, it looks like its lucky streak is over.

The real estate boom is fading. An unstable government has squabbled over energy and taxes, recently making Scott Morrison the seventh leader in 11 years. Now, the U.S.-China trade war threatens to damage Australia's biggest commodity customer, pushing the Australian dollar close to a decade low against the greenback.

With a third of its exports headed for China -- equivalent to 6.5% of the economy, according to UBS -- Australia is eyed as one of the canaries in the coal mine. Escalating tariffs are a "big shock" that will surely "change the structure of [Australia's] trade with China, and ... change trade throughout the region," said Shiro Armstrong, director of the East Asian Bureau of Economic Research at Australian National University.

Yet, with its back against the wall, Beijing has signaled it will open the stimulus spigot to protect its economy. For Australia, this offers a glimmer of hope: years of experience have taught the country that China stimulus translates into big infrastructure projects, creating more demand for its iron ore.

To be sure, Australia's headline numbers still look healthy. Gross domestic product grew 3.4% for the year through June, the fastest pace since the height of the mining boom in 2012 and better than any Group of Seven economy.

That said, there are reasons to think the economy is weaker than it looks.

Bolstered by high immigration, the per capita figure fades to 1.8% year on year -- lower than both the U.S. and European Union. And gone is the buoyant property market seen over the past five years, when house prices soared by 50% and investors made up roughly half of home loan approvals.

Aisha's reaction -- restraining consumption and potentially selling at a loss -- is exactly what economists fear. Selling might even be a challenge, as home auctions draw thinner crowds.

"It has been difficult, as financial institutions are tightening their belts in terms of lending," acknowledged real estate agent Andrew Anastassiou. His sales patch is the once-booming Sydney market, where house prices have dropped 7% on the year, though he has not completely shed his Australian optimism. "I am not overly concerned, as everyone needs a roof over their head."

The housing cool-down is partly by design. Tighter lending controls, imposed by regulators worried about a bubble, have successfully dampened property investment. New investor loans dropped over 15% on the year in July, on the heels of the first nationwide annual price fall in almost six years, according to the May update of a closely watched index.

More dangerously, analysts warn of a fading "wealth effect," when the dimming halo of property ownership prompts people like Aisha to curb spending. The key consumer confidence gauge, compiled by Westpac Bank-Melbourne Institute, dropped 3% this month to its weakest level in 10 months.

All of this "does not bode well" for the country's banks, Fitch Solutions observed in a note. Australian banks are among the most profitable globally, and responsible for 9% of the country's economy. But they have also relied on housing for easy credit growth, with mortgages accounting for 60% of their loan books. Over this looms the trade war. The OECD warned on Sept. 20 that trade war-related anxiety is already "weighing on global growth," capping projections at 3.7% growth this year and next.

But Chinese stimulus is always a windfall for Australia. The money flows into construction and "draws in primary resources from Australia to directly deliver the infrastructure itself," said Brendan Rynne, chief economist for KPMG Australia. The stimulus also stokes consumption, generating demand for other key exports like agricultural goods.

As U.S. President Donald Trump escalated tariffs to $250 billion this month and China fired back with its own -- totaling less than half of those from the U.S. -- Premier Li Keqiang told the World Economic Forum in Tianjin that the government would build on its "massive measures" to reform the economy. Li vowed to stabilize infrastructure investment, support consumption and reduce other tariffs to cope with "a host of difficulties ... in the global economic and trade context." Markets took Li's words as confirmation of China's readiness to dip into the public purse. The Australian dollar rallied against its U.S. counterpart and the safe-haven yen, after tumbling for weeks. Chinese property and infrastructure stocks -- heavy consumers of Australian iron ore and coking coal -- jumped. So did miners BHP Billiton and Rio Tinto, whose massive iron ore operations are centered in Australia's Pilbara region.

After watching Beijing push a round of monetary and fiscal measures in July, some companies are counting on China's willingness to jump-start growth. "We anticipate that a number of things will be done to stimulate [Chinese] domestic demand," BHP chief executive Andrew Mackenzie told analysts in August. "All the usual measures -- monetary, fiscal, credit.

"The effect on our earnings is actually much less than people think," he added.

Elizabeth Gaines, CEO of Fortescue -- Australia's third-largest iron ore miner -- is bullish. She told the Nikkei Asian Review she is confident "in the growth prospects and long-term fundamentals of the Chinese market, and in the Chinese government's capacity to maintain stable economic growth through investment in infrastructure and domestic consumption."

An executive of a listed Chinese infrastructure company in Beijing was also hopeful, if more guarded. "It is possible that we will see more and more infrastructure projects in China during the second half of this year," the executive said, "but it is too early to know how big that increase would be."

A decade ago, during the global financial crisis, Beijing's 4 trillion yuan ($586 billion) stimulus package drove up iron ore to eye-watering levels of over $180 per ton. Australia, one of the few suppliers able to meet demand, was also one of the few countries to weather the crisis without a recession. Even now, the country's revenues are so sensitive to the material that a price movement of $10 per ton influences the national budget by 5.5 billion Australian dollars ($3.9 billion).

Just as Australia's mining industry began to falter in 2014, the property boom arrived to fuel credit growth and prop up construction and spending. Then, in 2016, renewed stimulus from Beijing pulled commodity prices into another upturn, boosting miners' profits and government income.

The trouble with relying on China to come to the rescue is that it allows Canberra to put off much-needed structural reforms. In August, Australia's ruling party suffered a leadership coup, partly triggered by a spat over energy policy. The tension was heightened by a public outcry over a domestic shortage of gas, rooted in the shortsighted contracting out of much of Australia's supply to Asian buyers.

For many, it showed the dysfunction Australia could afford after almost three decades of comfortable growth.

"I don't think it is so easy to get away from our dependence on China's economy," said Roland Rajah, director of the International Economy Program at the Lowy Institute, an Australian think tank. "Ultimately ... we produce and sell what China wants to buy."

Rajah stressed that China faces a balancing act between countering the trade war and avoiding a further buildup of financial leverage. "For Australia, more stimulatory policy might be beneficial in the short-run, but our interests wouldn't be served by a further buildup of risk in China's economy."

Aside from growing pressure on Australia's banks -- the mortgage slowdown, rising offshore funding costs due to the falling Australian dollar, and a government probe into misconduct including risky home lending -- other risks are gathering. Incomes are stagnant and their household debt is already among the highest in the world at 120% of GDP. The country's infrastructure and undersupplied housing market will have to withstand surging immigration.

And then there is the biggest question of all: as its last big mining projects come on line, what can power the Australian economy besides natural resources?

The Reserve Bank of Australia, in its trade war modeling, said Chinese stimulus "could provide an offset" to reduced demand for Australia's commodities but would come "at the cost of exacerbating longer-term structural problems and contributing to financial risk."

Rajah offered a similar warning. "I think there is no question there is a strong degree of complacency built up over the years," he said, "and this is a real blockage to reform of any kind."