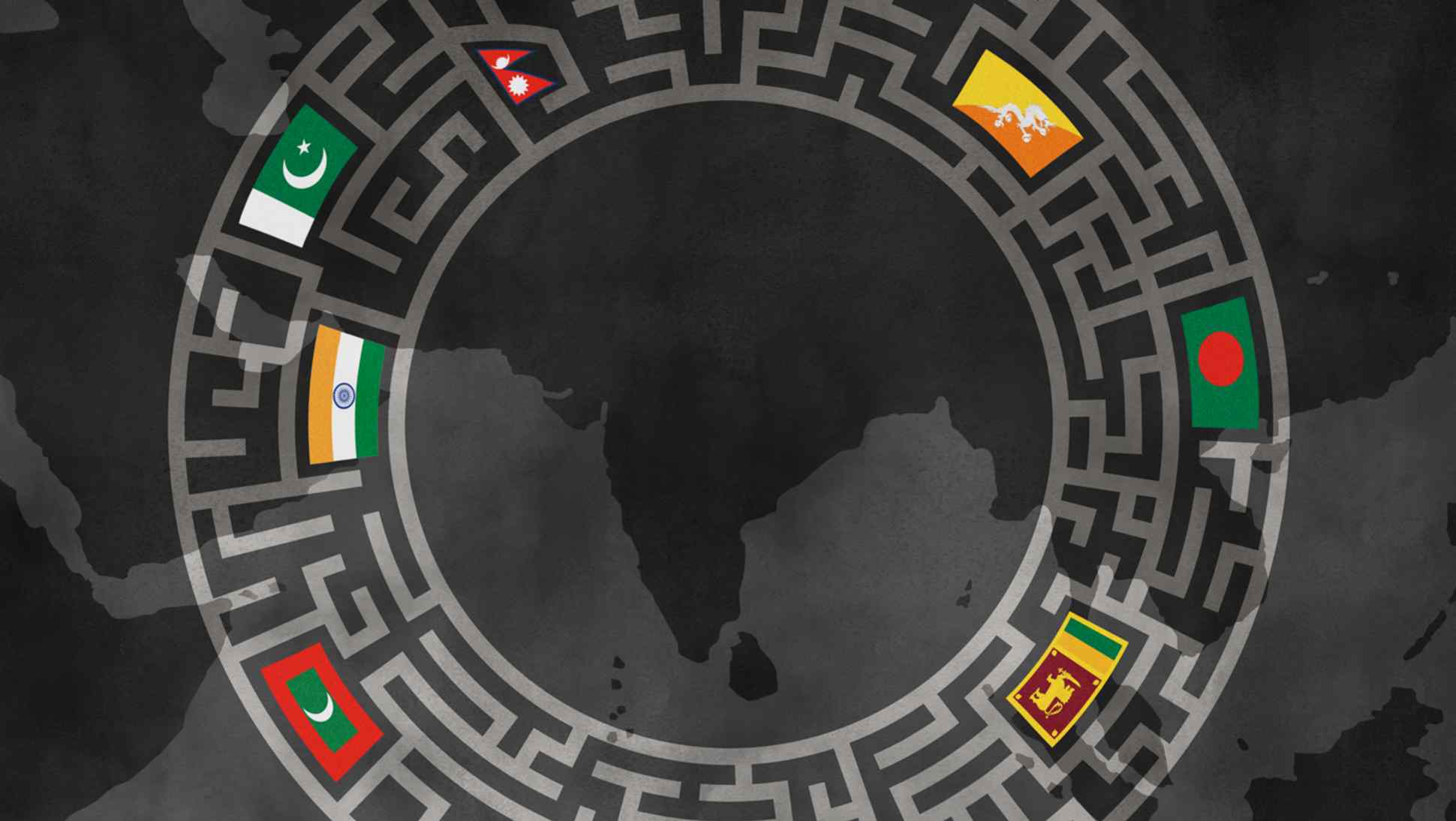 Beyond Sri Lanka, economic cyclone bears down on South Asia

From Pakistan to Maldives, forex and debt risks grow as inflationary headwinds build

MUMBAI -- For over a decade, Mattias Martinsson has been investing in frontier economies, including Pakistan, Bangladesh and Sri Lanka. Now, he says, South Asia is "in the eye of the storm."

"The next couple of months will be painful for the South Asian markets," predicted Martinsson, chief investment officer at $220 million Swedish fund Tundra Fonder. "There is a high possibility that we will see both inflation and interest rates rising and currencies depreciating."

Sri Lanka's rapid descent into the economic abyss has shocked the world. As the country's accessible foreign reserves dwindled to next to nothing and citizens suffered under acute shortages of fuel, food and medicine, the government last month "preemptively" defaulted on its international debt for the first time.

But while the Indian Ocean island is the most desperate country, it is not alone. From the beaches of the Maldives, to the mountains of Nepal, to the bustling streets of Pakistan, much of South Asia faces similar risks from shrinking forex coffers and surging global inflation. While countries around the world are feeling similar headwinds, South Asia is home to a particularly vulnerable cluster -- one that is in focus this week as India's central bank meets, a Maldivian bond matures, and Pakistan prepares its budget.

South Asian nations have also rung up relatively hefty foreign debt, including significant amounts to China, which has courted them under what Indian and American foreign policy wonks refer to as the "string of pearls" strategy. Over the years, Beijing pumped in cheap loans in exchange for strategic assets through long-term leasing programs, giving itself a strategic hedge against India. Sri Lanka owes an estimated 10% of its debt to China, while Pakistan's figure has been reported at 27.4%.

As the pressure builds, countries are eyeing escape routes.

Rohan Gunaratna, a leading South Asian scholar who has written several books on Sri Lanka, described the country as the "first domino to fall," adding that its "weak economy was crippled by the loss of tourism, loss of foreign workers' remittances and rising energy prices." Sri Lanka's inflation rate for May hit a record 39.1%, its statistics office said last week.

But observers also say Sri Lanka lacked foresight. After President Gotabaya Rajapaksa won the 2019 election, Martinsson said that "the new government's idea was to stimulate the country out of the debt trap by lowering taxes. It could have worked, but when COVID hit Sri Lanka's tourism revenue was impacted, along with its ability to service its foreign debt." 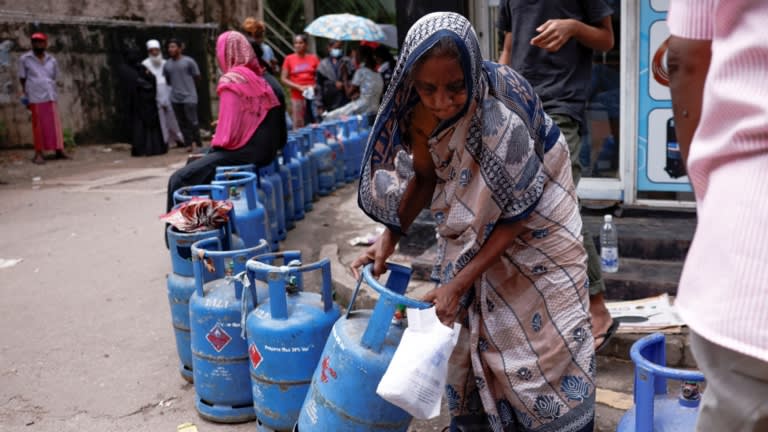 A woman waits to buy gas amid Sri Lanka's economic crisis in Colombo on June 1.   © Reuters

Rather than negotiating with foreign lenders and the International Monetary Fund early on, Sri Lanka continued to pay as its reserves evaporated. "They did not want to go to [the IMF] because this would require stringent fiscal discipline," Martinsson said. "Instead, they took a bet on the tourism industry recovering in time."

That did not happen. Panicked officials resorted to capital controls, limiting the withdrawal of foreign currency by citizens, companies and foreign investors, further discouraging outside investors. Making matters worse, the government banned fertilizer imports last year in an ill-fated attempt to conserve foreign currency. Partly as a result, the country's vital tea exports hit their lowest level in more than two decades in the first quarter of this year, according to reports.

In April, Sri Lanka's usable liquid reserves were said to be just $50 million, enough for only days' worth of imports. "It is one of the worst crisis managements that I've seen, if not the worst," Tundra's Martinsson said. "I can't explain it as anything else but a gamble, which they lost."

Pakistan is another economy on the precipice. While conditions are not as dire as in Sri Lanka, Pakistan's total foreign reserves plunged to $16.4 billion at the end of April, down from $24 billion last fall, according to the State Bank of Pakistan. Its ratio of external debt to gross domestic product stood at nearly 35% as of the beginning of the year, versus Sri Lanka's 58%.

"Sri Lanka and Pakistan are stressed due to high external debt to GDP levels, plus current-account deficits, caused by too much previous optimism [and] borrowing," said Mike Gallagher, research director at Continuum Economics, a macroeconomic research specialist that counts BlackRock and the IMF as clients. "Now their central banks are faced with a crisis at the worst possible time -- when the [dollar] is strong and the Fed is pushing interest rates to 2.5% to 3.0%."

Tightening by the U.S. Federal Reserve affects emerging markets by increasing their debt burdens and sucking capital out of their economies.

Like Sri Lanka, where protesters have raged against Rajapaksa, Pakistan has been rocked by political instability. Former Prime Minister Imran Khan's government was ousted in a no-confidence vote in April, prompting massive protests. The new government of Shehbaz Sharif is attempting to right the economic ship, starting with an unpopular decision to slash fuel subsidies in a push to unlock IMF funding. 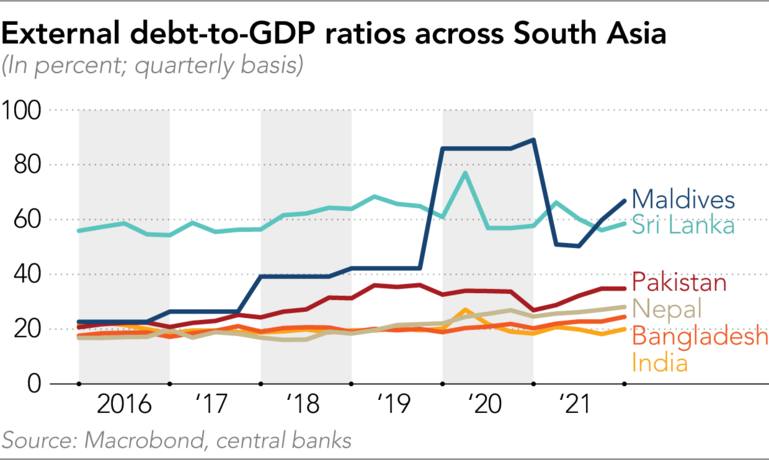 "It is tempting to try and lay blame for Pakistan's current economic situation on any one government's policies," said Asim Ijaz Khwaja, director at Harvard University's Center for International Development and co-founder of the Centre for Economic Research in Pakistan. "The reality is that our situation has been decades in the making and reflects, sadly, a set of poor choices and systematically inadequate policy formulation and refinement processes. At its essence, the problem is one of lack of long-term planning and no focus on productivity."

Now, Sharif must compile a new budget, expected Friday, under intense pressure to call fresh elections. Usama Abid, chief investment and research officer at Pakistani investment app YPay Financial Services, warned of possible further erosion of forex reserves and political chaos ahead of the next polls, which are due by October 2023 at the latest.

"Reserves with Pakistan's central bank need to go above 2.5 to three months' worth of imports, as that's the thermometer of confidence," Abid told Nikkei Asia. The latest figures from the CEIC database showed just 1.6 months' worth as of March.

Meanwhile, Pakistan's central bank in May hiked its key rate by 150 basis points to 13.75%, aiming to contain inflation that hit 13.8% the same month. Abid said that if the central bank's policy rate moves to 15%, it will be "painful" for the stock market and banks with heavy exposure to longer maturities. A supporter of ousted Pakistani Prime Minister Imran Khan protests against fuel price hikes in Peshawar on June 3, as the new government seeks a deal with the IMF.   © Reuters

Then there is neighboring India, the world's sixth-largest economy. It, too, is feeling the impact of inflation, with retail prices rising nearly 7.8% on the year in April. The country's forex reserves shrank for nine straight weeks until mid-May, according to local media, though observers say the total of around $600 billion is adequate. Its central bank performed a surprise off-cycle rate hike on May 4 and is meeting again this week.

Also on the radar this week is the Maldives, which has a $250 million bond due on Tuesday. The finance minister insisted to local media that there was no risk of default. U.S. investment bank JPMorgan, however, included the tourist haven on a list of those at risk of defaulting by the end of 2023.

Total debt to GDP in the Maldives exceeds 100%, with the ratio of external debt at nearly 67% in January -- a heavy load for its fragile economy. The Bahamas, another tourism-driven island state on JPMorgan's watch list, had an external debt ratio of 36.5% according to data provider Macrobond. 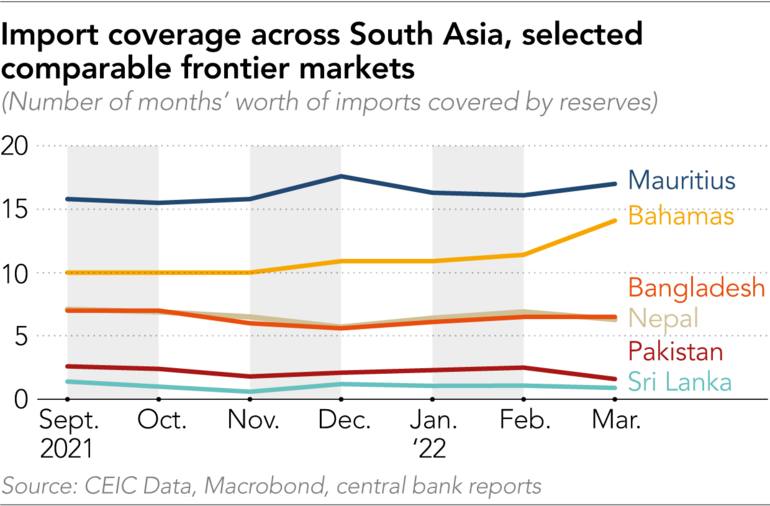 "Maldives is highly vulnerable to external and macroeconomic shocks due to its dependence on tourism and limited sectoral diversification," said Faris Hadad-Zervos, country director at the World Bank, which warned in April that the Ukraine war risked pushing up the Maldives' fuel bills and fiscal burden.

Nepal's macroeconomic stability is also under scrutiny. The government even suspended the central bank governor, reportedly for not doing enough to maintain forex reserves.

Gunakar Bhatta, executive director and spokesperson at Nepal Rastra Bank, the central bank, argued that "Nepal's public debt to GDP is a manageable 40%, and out of this only 950 billion Nepalese rupees ($7.6 billion) is held by international institutions, which are mainly multilaterals. There is no question of the country defaulting as Nepal currently has about 6.6 months' worth of import coverage, provided by its forex reserves."

Bhatta did concede that inflation and the adverse effects of the country's trade deficit are threats, however. Like much of South Asia, the idyllic but tourist-dependent Maldives faces growing economic pressure.   © Reuters

An exception is Bangladesh. Inflation hit 6.29% in April, but the country has so far kept forex reserves and external debt at more sustainable levels, thanks to some tough decisions. Dhaka did not opt for aggressive COVID-19 lockdowns, helping to maintain tax revenue. It has also refrained from intervening extensively in the open market to prop up its currency, saving funds for a rainy day, while carefully managing its fiscal deficit and current-account balance.

Essentially, Bangladesh made a macroeconomic trade-off.

"With current challenges of high inflation, and subsequent policies of narrowing down fiscal expenditures and undertaking tight monetary approaches, recovery would be slower than expected," explained Monzur Hossain, research director at the government-backed Bangladesh Institute of Development Studies. But for the sake of macroeconomic stability, he said, "GDP growth may be compromised."

Still, there are no easy answers. 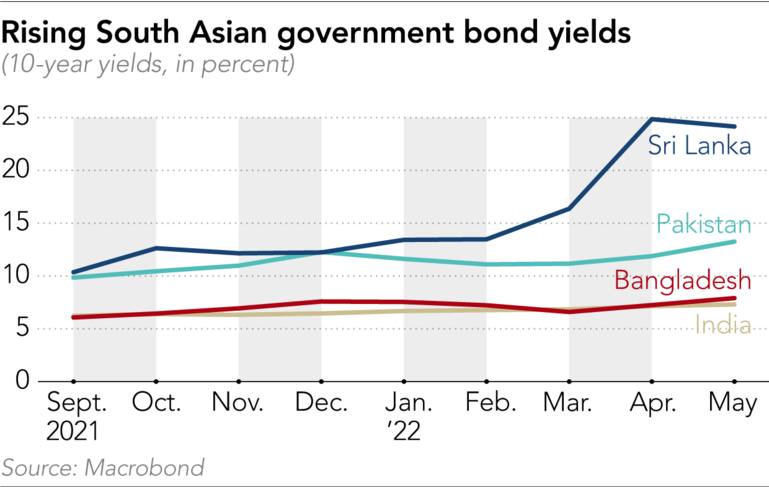 To save foreign currency, several countries have restricted imports of luxuries and nonessential goods. Back in March 2020, Sri Lanka prohibited imports ranging from vehicles and air conditioners to beer. This had little effect.

The China connection is also a complication. In Sri Lanka's case, Beijing has reportedly resisted taking a haircut on the debt. Natixis Asia Research last week suggested that "this is due to China's role as the largest creditor to the emerging and developing countries," pointing out that China accounts for almost one-fourth of their external debt based on World Bank estimates, and that it is likely reluctant to set a precedent "for other distressed debtors."

Most analysts do not anticipate a repeat of the 1997-98 forex crisis that swept Southeast Asia. But to avoid becoming the next domino to fall, Continuum's Gallagher prescribed for frontier economies a carefully handled combination of interest rate increases, some currency depreciation to help exports, prudent use of remaining forex reserves and IMF support. Sri Lanka is seeking a multibillion-dollar bailout from the IMF.

To an extent, South Asian economies will remain at the mercy of the Fed. Dwijendra Srivastava, chief investment officer for debt at Sundaram Mutual Fund -- one of South Asia's largest with over $7 billion under management -- called U.S. tightening "the biggest threat," along with geopolitics elevating energy and food prices.

Gallagher agreed. "If the Fed becomes restrictive, then a risk exists that others could follow the current preemptive default in Sri Lanka."

As they scramble to avoid that fate, these economies could strive for greater diversification over the long term. The scholar Gunaratna stressed they need a sharper eye for trouble. "To mitigate against future global shocks," he said, "South Asian governments must develop capabilities in both foresight and intelligence to anticipate and prevent crises."