SINGAPORE -- It was all so simple: 72-year-old Margarette Taylor received a letter from Singapore's government in March, inviting her to take a COVID-19 shot. She went to the Health Ministry's website and booked an appointment in minutes.

Two days later, Taylor hitched a ride with a neighbor to a community center 15 minutes away to get her first dose of the Pfizer-BioNTech vaccine.

"I just wanted to get it over and done with," the retired receptionist told Nikkei Asia. "When you get this disease, it really affects your lungs and things like that, so I thought better be safe than sorry."

The advent of coronavirus vaccines has given Taylor hope that her life, on pause like countless others, might soon resume. But many across Asia and elsewhere find themselves in a sort of purgatory -- waiting for shots that are slow to arrive and watching as global infections soar higher than at any point last year.

In Japan, where vaccinations are off to a sluggish start, Tokyo and three other urban areas are under a state of emergency less than three months before the Olympics. Southeast Asian countries like Thailand, Malaysia and the Philippines are fighting serious waves. No nation is suffering more than India, a major vaccine producer that is nevertheless dealing with record infections, overwhelmed hospitals and mass cremations of the dead.

Even in places where the pandemic has calmed and jabs are relatively swift, like Singapore, there are still unknowns and battles to fight. For epidemiologists, the uncertainties center on questions such as, how long does immunity last? And how effective are the vaccines against emerging variants?

For the rest of us, one question looms largest: How does this all end? There is no question that the introduction of vaccines is a remarkable feat. Taylor is one of roughly 600 million people worldwide who have been fully or partially vaccinated against the SARS-CoV-2 virus, as of Saturday according to Our World in Data.

In January 2020, that virus was a mysterious new threat. Just 16 months later, there are thirteen vaccines approved for full or early use, with an additional 26 in late-stage clinical trials. Normally, taking a vaccine from petri dish to people's arms takes between eight and 15 years.

Herd immunity -- the point when enough people are protected so that the virus cannot spread easily -- might be achieved without vaccines, by letting COVID-19 run through populations. But most medical experts and political leaders agree that mass vaccination is the only way to avoid untold human suffering and countless preventable deaths.

Malaysia's Awang Bulgiba Awang Mahmud is one of them. "Our goal of exiting this pandemic and returning the country to some degree of normalcy rests in large part on the success of our vaccination program," which started in late February, said the epidemiologist and head of the country's Independent COVID-19 Vaccination Advisory Committee.

While there is no global consensus on what percentage of a population must be vaccinated for herd immunity -- variables include transmissibility, vaccine efficacy and population density -- there is "a general convergence to 80% or 90%," said Teo Yik Ying, dean of the Saw Swee Hock School of Public Health at the National University of Singapore.

Getting there will take time, experts warn. Inoculating just 60% of the population will likely take Singapore and Hong Kong, known for their efficient health care systems, at least until the end of the year, The Economist Intelligence Unit estimates.

Japan is not forecast to hit that mark until late 2022, according to the EIU's latest outlook as of April 22. This suggests a delay beyond the "mid 2022" timing the EIU projected for Japan in March, apparently due to a reluctance among the general public to get jabbed and a slow start to vaccine approvals.

Others will probably hit the same target much later: 2023 for Indonesia and the Philippines; possibly 2025 and beyond for Cambodia, Myanmar, and Laos. The protracted timelines are due to delays in vaccine production, snags in procuring shipments, difficulties in distribution and other logistical headaches. 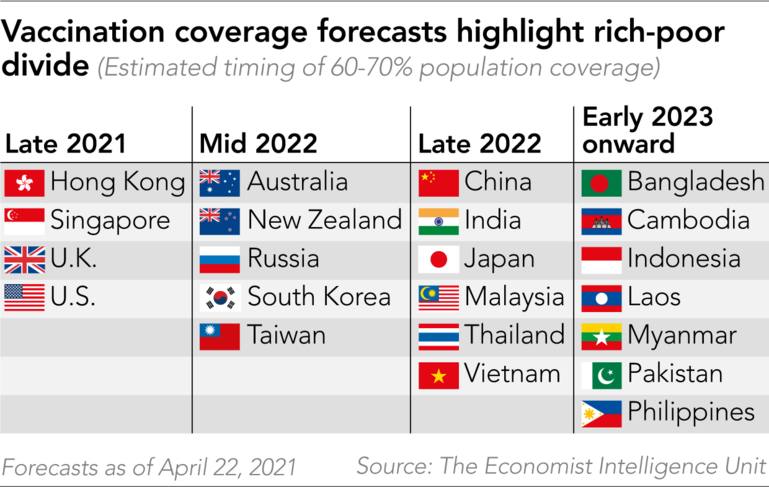 But if vaccination rollouts are successful, he is confident that life should "slowly return to pre-pandemic norms" and that "restrictions will gradually be lifted."

Teo agreed. "I think in one to three years, the wealthier countries will be able to resume a lot of activities in almost every sector, including some of the high-risk ones like sports, large-scale dining, clubbing and the nightlife industry."

Singapore is already inching toward that. It hosted the Singapore Tennis Open at the end of February, with 250 spectators allowed on each of the tournament's final two days. And in August, the country expects to welcome roughly 1,000 delegates for the World Economic Forum.

Still, experts are haunted by risks.

Variants are suspected of contributing to India's explosion, though the evidence is inconclusive and other factors like complacency are also being blamed. One WHO "variant of interest" first identified in India, known as B1617, is drawing scrutiny due to two key mutations seen in other strains.

This "is concerning because there is a similarity in these mutations which confer increased transmissibility, and some of these mutations also result in reduced neutralization, which may have an impact on our countermeasures including the vaccines," Maria Van Kerkhove, the WHO's COVID-19 technical lead, said in mid-April.

With vaccine studies showing mixed results against current variants, Teo predicted more complications. "As the coronavirus mutates, we will need new vaccines," he said. "It's going to be an evolutionary arms race between humans and the coronavirus." 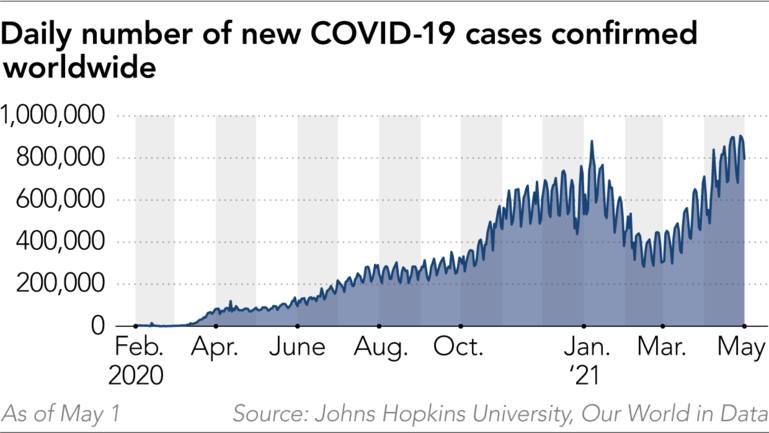 Policymakers face other pitfalls. "Dealing with misinformation about vaccines is going to continue to be a problem for governments during the rollout," said economist Dominic Meagher, a visiting fellow at Australian National University in Canberra.

Falsehoods abound on social media. "There is a lot of doubt in people's minds still [about the vaccines] because of the gossip that is going around on WhatsApp," said Shirley Menezes from Pune, India. The 68-year-old and her husband received their first doses of the Oxford-AstraZeneca vaccine on March 5 at a clinic close to their house. "I even heard somebody say it can change your DNA."

Taylor heard the same rumor, and others. "It's so confusing, I read so many articles. Some say the vaccines will give you certain side effects that you might mistake for cancer."

Misinformation makes it harder to combat vaccine hesitancy and "anti-vaxxers" who oppose vaccination altogether. A survey in the Philippines found nearly half of 2,400 adults did not want the jab. Other research published in The Lancet medical journal put Japanese reluctance at 33%. Yet another poll in Singapore found concerns about safety were higher among younger residents. 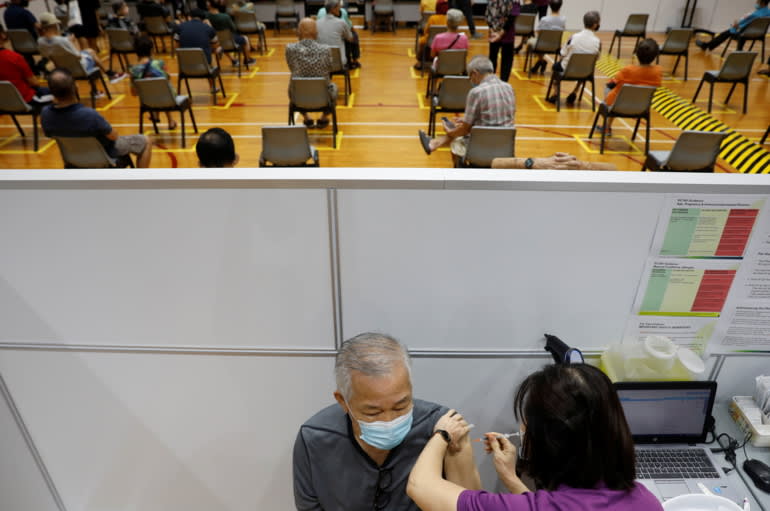 A man receives his coronavirus vaccination as others wait in Singapore in March.   © Reuters

Even in Australia, which according to Meagher has "very broad support" for vaccinations in general, some fans booed at this year's Australian Open finals when a tennis official mentioned the vaccine rollout. "That was shocking," he said.

Another tricky issue involves pockets of people who might be overlooked in vaccination drives. These include undocumented migrant workers. Already, some countries in Asia, including Malaysia and South Korea, have promised free testing and vaccinations to these populations without fear of reprisal.

"But it's not that straightforward," Teo cautioned, pointing to "logistical, financial, and equity issues."

"If you are already struggling to get sufficient doses for your own people, why should your government be advocating some of these vaccines to undocumented foreigners?"

Such a policy might also cause an influx of "vaccine refugees" into certain countries, which would "compound a lot of illegal border crossing," he added. 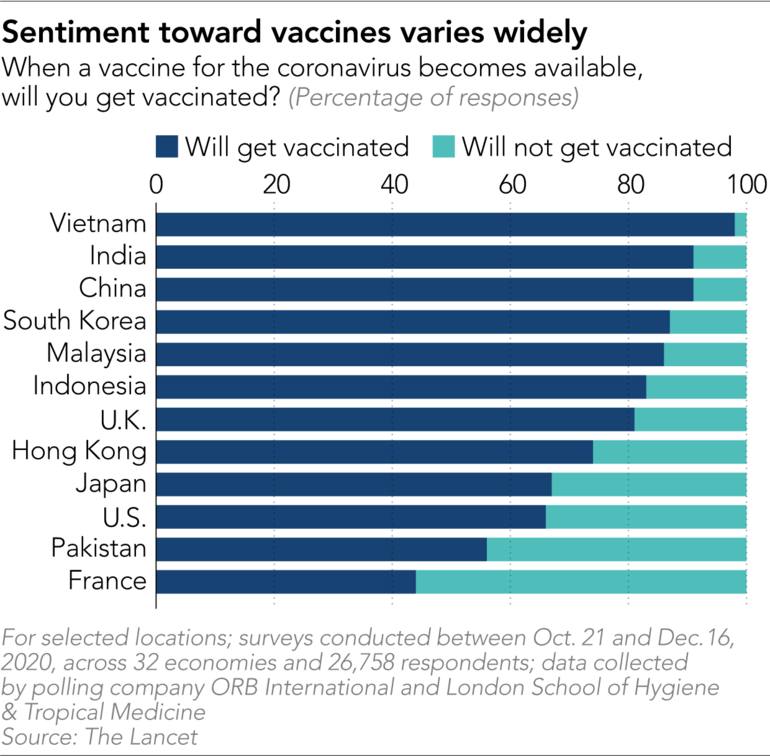 Moreover, vaccine programs could increase tensions between governments and their people over personal freedoms. "There will be a tendency to argue that public health restrictions should no longer apply once an individual is vaccinated or once a vaccination program achieves a certain amount of coverage in a particular area," said Walter Theseira, an economist at the Singapore University of Social Sciences.

"But opening up too quickly could well lead to a resurgence in COVID-19," he said. "This is one area where it's likely that countries will differ sharply in their approach, depending on the extent to which their economy depends on travel and whether the public is well-informed of the science behind COVID-19 and vaccines."

Then there is the hot-button topic of whether governments should issue "vaccine passports" -- official documents that verify if someone has been inoculated. Many see this as necessary for further opening up domestic sectors, as well as jump-starting international travel. But the issue is fraught with challenges. For vaccine passports to be recognized worldwide, governments will need to agree on standards for data recording and anti-forgery measures. Plus, the effectiveness of current vaccines varies, from 95% for Pfizer and Moderna to as low as about 50% for Sinovac. Countries would need to decide on an acceptable cut-off, which could exacerbate imbalances between rich and poor nations.

Partly because of these hurdles, many experts believe international leisure travel is still some way off. "It's going to take a much bigger effort as that's going to rely much more on stopping the pandemic globally, rather than locally," said Meagher.

Instead, "more and more travel bubbles" are likely, according to Teo -- mainly between wealthier nations that reach herd immunity first. Australia and New Zealand, which are slow to vaccinate but have contained the virus well, opened one in mid-April, while Singapore and Hong Kong aim to launch a long-shelved air bubble on May 26. For people like Taylor, even this partial resumption of travel would be welcome. Her two children live abroad, and the devout Catholic had been booked to go to Israel last year before the pandemic hit.

Israel, as it happens, is closer to "normal" than any other country. Nearly 60% of the population has been fully vaccinated. Daily cases have plunged. People are going maskless as the government strips away rules. And tourism officials are eyeing a reopening for vaccinated travelers in the coming months: "We want to breathe oxygen back into the tourism economy of Israel, and Israel has the advantage as a healthy, vaccinated country," Tourism Minister Orit Farkash-Hacohen told local media on April 27.

At least, Meagher said, those who get the jab should be able to look forward to more intangible joys: "Just the comfort of being able to see groups of friends and to know that you're not going to bring a deadly virus back to your home and risk your family's lives and health -- that's the holy grail."