Households skimp on smartphones but still spend on movies

DALIAN -- Li Qiang's household income has soared 70% in the last five years, but life isn't getting any easier.

"Economic pressure is only rising," said the 36-year-old white collar worker with a wife and 1-year-old child in Dalian. It is a sentiment many Chinese share, and it tells us a lot about why consumer spending growth is slowing after years of rapid expansion egged on by the government.

Yet, even as pessimism builds, a closer examination reveals there are still pockets of brisk demand. China's consumer market is as complex as the country itself, but it remains a land of opportunity if you know where to look.

The Li family is pinching pennies to stretch a monthly income of 12,000 yuan ($1,780) -- about average for their northeastern city. They stick to buying low-priced clothing online and avoid eating out.

Other expenses have been adding up. Li is facing nearly 30 years of 2,500 yuan monthly mortgage payments. He and his wife spent 50,000 yuan on infertility treatments, childbirth and baby supplies. He also pays 700 yuan a month for his father's heart disease treatment.

Already, he is worried about the strain of paying for his child's education -- a fear that forced the family to forgo replacing the refrigerator. 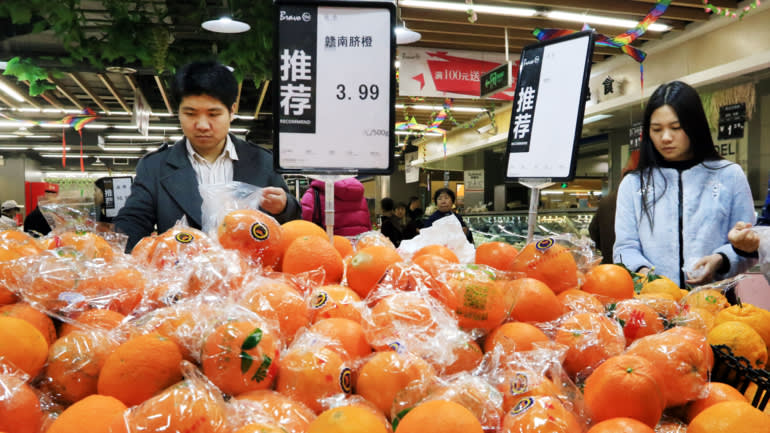 A supermarket in Beijing: Many Chinese consumers are tightening their purse strings. (Photo by Akira Kodaka)

Consumers like Li have more distant concerns, too, as the trade conflict with the U.S. begins to take a toll on China's real economy. "Consumption growth has obviously lost steam, due to concerns over a gloomy economic outlook and growing household debts," said Shen Xinfeng, a macroeconomy analyst at Northeast Securities.

Still, there is another reason the country's double-digit retail market growth slipped into the single digits -- 9% -- in 2018. The market has begun to mature, especially in the coastal cities of Dalian, Shanghai and Guangzhou that led the Chinese economic ascent.

Many residents of these metropolises now own basic home appliances like TVs and fridges, contributing to sluggish sales of these products. Sales of smartphones and new cars also took a downturn last year. In the last quarter of 2018, both declined by more than 10% on the year.

Shen said Chinese families that already purchased their first car are less likely to buy a new one amid the economic downturn.

Just as China's vast manufacturing sector began to falter around 2010, prompting the government to prioritize consumer spending as a new economic engine, consumption has reached a turning point. As the mood darkens, consumers who once followed the crowd to famous brands and pricey products are becoming more discerning. Some are even shunning traditional ideas about what constitutes a fulfilling life -- a house and a car.

"I have given up on buying my own home because I do not want to become a fangnu," said Sun Jiayang, a 31-year-old who works for a private investment company in Beijing. Fangnu, which literally translates to "house slave," describes people who are shackled to jobs they dislike because they have to make mortgage payments.

Sun and her husband bring in around 50,000 yuan a month, but if they bought a decent condominium in the capital they would be stuck making payments for the rest of their working lives.

As for a car, Sun thinks buying one in Beijing is "foolish," given the city's well-developed subway network and chronic traffic jams.

Sun's economizing does not stop there. She uses bicycle sharing services to get around and buys secondhand furniture and appliances with her smartphone. This leaves her leeway to spend on things she really wants: fine wine and whiskey, or scuba diving getaways to the Philippines and Indonesia.

So while some young Chinese like Li are scrimping to support their families, others like Sun are simply spending in different ways. They are not spending at traditional department stores or general merchandise stores -- at least 60 stores have closed or suspended operations -- but they are shopping online. The e-commerce market continues to expand at annual rates exceeding 20%.

The restaurant industry is still in good shape, fueled by the rising popularity of online food delivery services, while movie fans continue to rush to the box office. Both sectors are growing at annual rates of nearly 10%.

Tourism is another bright spot. Chinese travelers took 5.5 billion domestic trips last year, up more than 10%, while overseas journeys totaled 140 million, up over 13%, according to the China Tourism Academy.

The overall service sector, buoyed by various forms of government policy support, now accounts for more than half of China's gross domestic product and has replaced manufacturing as the leading source of new jobs. A cinema in Dalian: The film industry is thriving as a source of affordable entertainment. (Photo by Daisuke Harashima)

The convenience store market continues to flourish. The number of stores in 2017 grew 13%, topping 100,000 as the total market expanded 23% to 190 billion yuan; the growth last year is estimated to have exceeded those figures.

New types of businesses are also sprouting up, catering mainly to consumers born after the late 1980s.

The Luckin Coffee, chain of modern cafes run by Beijing company Ruixing Coffee, has built a network of over 2,000 shops and become a serious rival to Starbucks in less than a year.

E-commerce giant Alibaba Group Holding's Hema Fresh chain of real-world supermarkets is gaining ground with a host of new technologies, including payment by facial recognition. The group opened about 100 of the stores in 2018.

Momentum is shifting not only to different market segments but also different regions.

The northeast is suffering a recession, while troubling signs are spreading in the high-tech south that has powered the nation's growth. Factories are closing and jobs are being cut.

Further inland, though, many areas are experiencing a construction boom thanks to heavy infrastructure spending by the government. 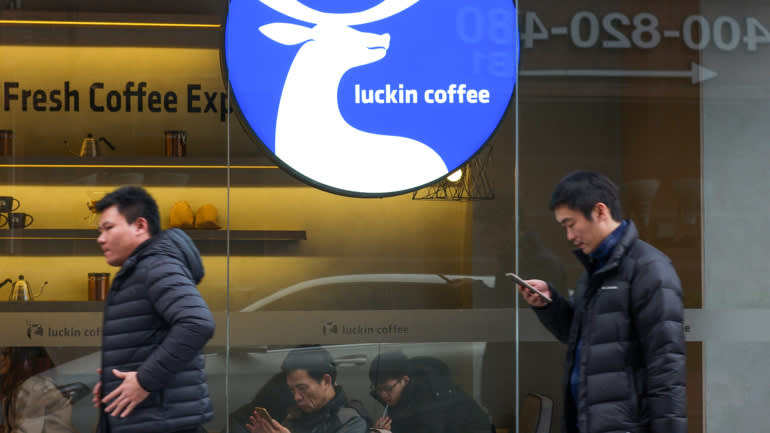 Chinese cafe chain Luckin Coffee has built a network of over 2,000 shops and become a serious rival to Starbucks in less than a year. (Photo by Sanmiao)

Xi Hui, a 24-year-old teacher at a private education company in Xi'an, the capital of the inland province of Shaanxi, is optimistic. "Since I can increase my income by job hopping, I have no worries about my future," he said.

Shaanxi's gross regional product grew 8.3% in 2018, well above the national rate of 6.6%. Real estate is still affordable in the province, compared with large coastal cities: Condos cost around 7,000 yuan per square meter, half the level in Dalian and less than one-tenth the price in Shanghai.

Xi, who has been working for an information technology company since he graduated from university, saves 2,000 yuan of his 5,000 yuan monthly salary to put toward a home. Even so, he said he can still afford to eat out and go to karaoke bars with colleagues.

"The psychological effects of the trade war will make a temporary dent in Chinese consumption, but there will be no big slump thanks to the stratification of Chinese consumers," predicted Xu Xiangdong at Tokyo-based China Market Research & Consulting.

Such sunny forecasts seem at odds with conditions in some parts of the Chinese economy. The limitations of official statistics only make it more difficult to pin down an overall trend: China's "total retail sales of consumer goods," the only official retail numbers, are skewed toward consumer products like smartphones and fail to take sufficient account of spending on services like cinemas and tourism.

But one clear takeaway is that a divide is opening up in China's economy, separating sectors and regions that are sputtering from those that still have plenty of room to rise.