SYDNEY -- They are the arteries of the modern global economy. Undersea cables, to put it simply, make the internet work. And for the most part, they are out of sight and out of mind -- though not for the governments of China, Australia and Western allies.

More than 95% of the world's telecommunications traffic flows through a mere 200 or so cables laid in the oceans. Companies from the U.S., Europe and Japan installed 85% of them, but China is eager to become a major player. This could add another dimension to Beijing's Belt and Road Initiative and, if critics are right, give the country an espionage and military edge as well.

Alarm bells are going off in the South Pacific.

China's Huawei Technologies group was set to lay a cable from the Solomon Islands to Australia -- that is, until the Australian government denied the company access to the Sydney landing station. In April, Australia confirmed it would take on the project itself.

"While Huawei is not a state-owned enterprise ... any company operating of that size in China must have some degree of government sanction," said Jonathan Pryke, Pacific Islands research director at the Lowy Institute, a think tank in Sydney. "Australia will not allow a Chinese company, even if not an SOE, to have access to a critical piece of Australian domestic infrastructure. We are funding it so we can control it, and that it can get done quickly." 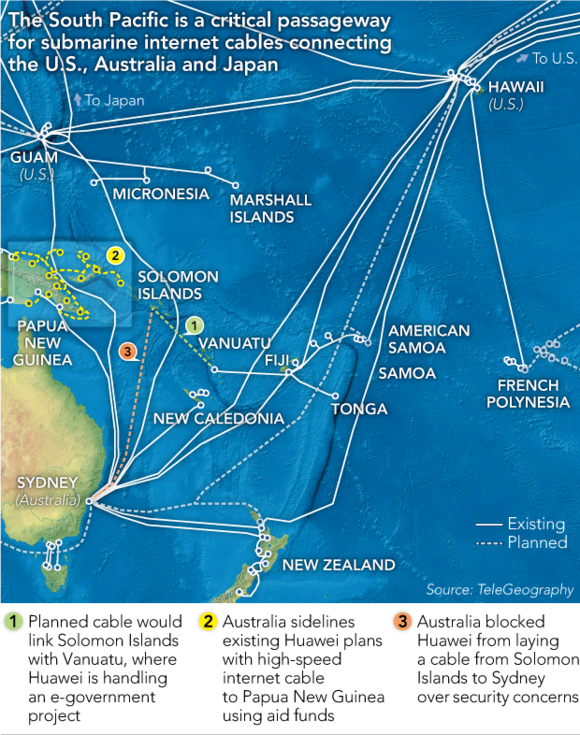 Sydney is a strategically important hub for cables that connect Australia and the U.S. The landing station is sensitive because a cyberattack there could cut off vital connections, with grave economic, political and military consequences. The cables themselves are vulnerable to tapping and other tampering.

On top of this, allegations of Chinese interference in Australian politics have been surfacing one after another, fueling suspicion in Canberra.

As illustrated by U.S. sanctions against ZTE, Western-aligned countries harbor serious concern over the intentions of China's telecommunications companies. "China insists that they are a benign power in the region, but the reason we are seeing so much anxiety about their role in the region is exactly because they have not satisfactorily articulated their objectives," Pryke said.

Huawei Marine Networks, the Chinese group's subsidiary, had announced last July that it would build the 4,000km submarine line between the Solomons and Sydney. "We've been planning this submarine cable for nearly seven years," the head of the government-owned Solomon Island Submarine Cable Company was quoted as saying in a statement released by Huawei. "Thanks to our partners Huawei Marine and Huawei Technologies for providing solutions to make it possible." The Solomons' then-prime minister, Manasseh Sogavare, was also named in the statement.

The next month, reports emerged that Huawei Technologies had donated 6.5 million Australian dollars ($4.9 million at the current rate) to Sogavare.

Huawei issued an immediate denial, saying, "These allegations have no basis in fact, and we denounce this type of groundless coverage." Sogavare visited Australia to meet with Prime Minister Malcolm Turnbull, and seemed confident that the project would proceed. "The security issue was expressed to us," Sogavare said, "but we continue to have discussions with the Australian government to see how we can solve that." 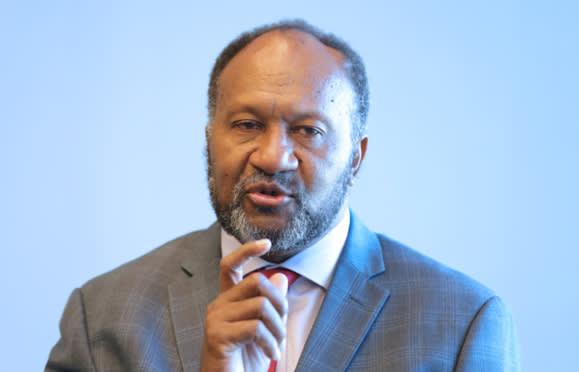 Vanuatu Prime Minister Charlot Salwai: "Everyone is blaming us" for cooperating with China "because we are trying to progress." (Photo by Ken Kobayashi)

But Australia's misgivings ran deeper than Sogavare may have realized.

Back in 2012, Huawei was caught off guard when Australia's security agency advised that the company be disqualified from bidding for a national broadband project. When it comes to the Solomons, Canberra clearly wants to keep them in its orbit. Australia led a Regional Assistance Mission to the Solomon Islands for more than a decade, through last year, as a buffer against ethnic tensions.

Last November, Turnbull announced that his government was in "close discussions" with the Solomons about laying a cable to the tiny country's capital, Honiara. A few days later, Sogavare, who had been ousted in a vote of no confidence triggered by the donation allegations, was replaced as prime minister by Rick Houenipwela, a former central bank governor and World Bank employee.

Now Australia is poised to build not only the Solomon cable but also another one to Port Moresby in Papua New Guinea, announced at the same time in April. China has been actively increasing its influence there, too, with Huawei Marine proposing a 5,457km undersea cable network to provide the country with "backbone telecommunications."

"Owning the telecom infrastructure enables China's intelligence services access to their neighbors' communications in bulk, as the U.S. reportedly has done in the past"

Again, Huawei appears to have been sidelined by an Australian government unwilling to cede nearby communications markets. Huawei's cable project for Papua New Guinea, unveiled in 2016, included a link to Jayapura, Indonesia. The plans "could have been a factor" in Australia's decision to swoop in, acknowledged Papua New Guinean diplomat Kapi Maro. "Now that this Australian one we have is already in progress, probably the Huawei one, in my view, may not progress."

Unlike the open-ended Chinese project, the Australian government's cable is to be finished by the end of next year, with Canberra covering two-thirds of the cost.

China's defenders argue the security concerns are much ado about nothing. "Attacks on the Chinese government are nonsense," said Tian Xiaohong, associate professor at the Research Center for Pacific Islands Countries at Liaocheng University.

As for Huawei, she cited insiders in explaining that "the company just bids for the projects [in the Pacific islands] and competes with telecom companies from all over the world." She said the insiders had "never heard" of any backing or monitoring by the Chinese government.

Tian said Huawei overcame stiff competition for a $22.5 million project to upgrade Samoa's telecom network. According to the professor, other bidders included Sweden's Ericsson and U.S. player Cisco, as well as ZTE and other smaller companies. 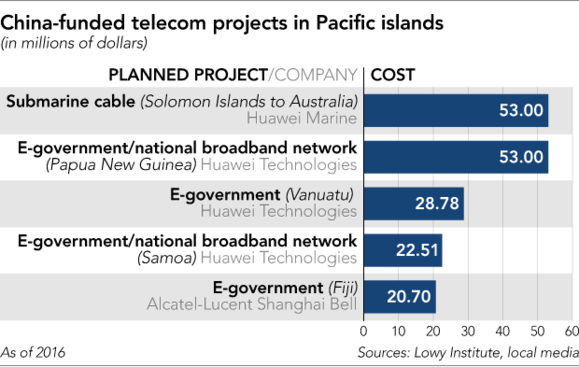 Still, Western experts say there is good reason to be cautious about letting China build telecom networks. "Owning the telecom infrastructure enables China's intelligence services access to their neighbors' communications in bulk, as the U.S. reportedly has done in the past," said Bryan Clark, a former U.S. Navy strategist and senior fellow at the Center for Strategic and Budgetary Assessments, a defense think tank in Washington.

The potential for spying is only part of the story. "If Chinese companies are the telecom provider," Clark added, "they establish a monopoly that yields continuous income into the future." Just as Russia has a stranglehold on energy supplies to its neighbors, telecommunications dominance offers "leverage with host nations, because China can degrade their telecom services [and] target specific actors, such as a company allied with the host nation's leaders."

Matthew Dornan, deputy director of development policy research at Australian National University, suggested Canberra's concerns about espionage involving Huawei are understandable. "Given the very extensive espionage activities of the Chinese government, I don't think this is entirely unfounded," he said.

Those very concerns, plus fears of hackers from Russia and North Korea, are spurring initiatives to strengthen cybersecurity cooperation spanning the Pacific and Atlantic oceans.

Small Pacific islands, meanwhile, remain caught in the tug of war, and not only over submarine cables. China is penetrating these markets in multiple ways. Huawei is emerging as a core provider of e-government systems, funded by China's soft loans, in Vanuatu and Papua New Guinea. Chinese-French joint venture Alcatel-Lucent Shanghai Bell is handling e-government systems in Fiji. More recently Huawei has ramped up its sales pitch to include cloud hosting services, with the Solomon Islands as its first customer.

As China advances, Australia is pushing back hard by enhancing its own relationships with its island neighbors. "Australia's strong support is a reflection of its stepped-up engagement in the Pacific and commitment to promoting economic cooperation and integration in the region," Turnbull and Prime Minister Houenipwela of the Solomon Islands said in a joint statement issued at a meeting of Commonwealth heads of government in April.

The U.S. is watching the South Pacific developments closely. Clark said America, too, may need to become more engaged.

China's growing technical ambition "is cause for concern for the U.S. and other traditional interests in the Pacific," Clark said. "This makes clear the need for the U.S. to get more aggressive in pursuing these opportunities, and the U.S. government may need to help by financing projects or by providing grants to countries to afford the infrastructure."

For now, though, it is difficult for Pacific island states to reject Chinese advances. Beijing knows what they need and is willing to provide it. 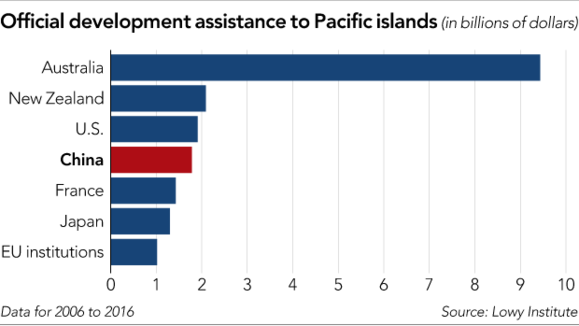 Vanuatu is another island impatient for its own undersea link to strengthen its feeble communications network. "For security, and because the one we have has almost exhausted its capacity ... we may soon be in big trouble," Prime Minister Charlot Salwai told the Nikkei Asian Review. Bidding for a planned line to the Solomon Islands is to open soon.

A cable is only one item on Vanuatu's wish list. "We don't have infrastructure. We need roads, we need more schools ... we need wharves," the prime minister said. "Everyone is blaming us" for cooperating with China, he said, "because we are trying to progress."

Vanuatu found itself in a storm of controversy in April, when an Australian newspaper reported it was in early discussions about China opening a military base at a recently built, Chinese-funded port. Both governments issued vehement denials, but the rumors were a reminder of how Beijing might use its growing leverage over the beneficiaries of its assistance.

Even so, an official from Papua New Guinea's government explained the enduring appeal of working with China. "In some areas in our country, Japanese cannot go for security reasons. But Chinese will go everywhere. They take risks."