Melting ice and ample resources spark race with US over Arctic

BEIJING -- Temperatures are rising in the Arctic, in both the literal and geopolitical senses.

As global warming melts sea ice across the far north, the region is becoming a development hot spot, with major powers like Russia and China seeking control of resources and transport routes. This creates a potential security flashpoint, too.

In March, a large ship carrying liquefied natural gas left Russia's Yamal Peninsula, which juts out from northwestern Siberia and contains some of the world's biggest gas reserves. The vessel was carrying the first India-bound shipment of LNG from the peninsula through Arctic waters via the Bering Strait.

Climate change made it possible.

Arctic sea ice has been steadily shrinking due to our planet's rising average temperatures. The maximum ice coverage hit the lowest level on record in 2017. By as early as 2030, the Arctic Ocean could be largely free of ice in the summer, according to the Arctic Monitoring and Assessment Program, a working group under the intergovernmental Arctic Council. 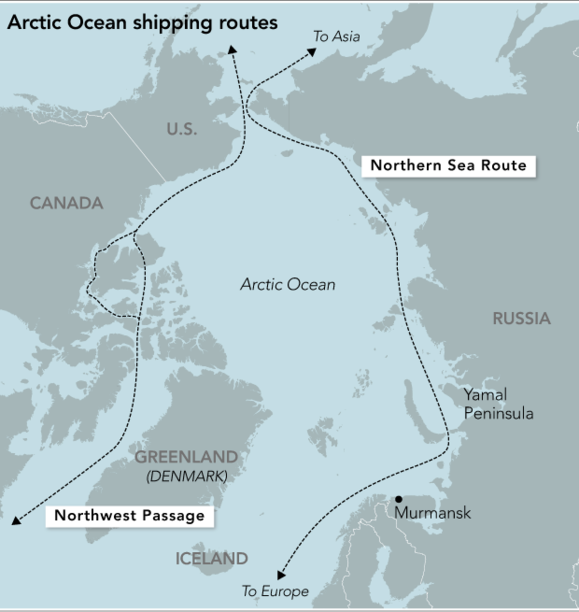 The trend is opening up new shipping routes that were once considered untraversable, with major economic and geopolitical implications. Immediate benefits would come from shorter shipping times. Sailing from Yamal to East Asia takes about two weeks, half the time needed for the route through the Suez Canal and the Indian Ocean, according to a survey by shipping companies.

After all, the Arctic Circle is much more than a barren expanse: It may hold about 30% of the world's undiscovered gas, according to one estimate by the U.S. Geological Survey.

Russia is wasting no time implementing its Arctic resource strategy.

Last December, President Vladimir Putin made the trip to Yamal, which means "end of the world" in the indigenous language. The temperature approached minus 30 C and the sky remained on the edge of darkness during the day, but Putin seemed to be in bright spirits at a ceremony for the launch of LNG production.

"A fantastic sight," he said of an airfield in the village of Sabetta in the Yamalo-Nenets autonomous district, where the LNG plant is located.

Russia has some help in Yamal. China is paying for part of the LNG development project. China National Petroleum Corp. holds a 20% stake, with an additional 9.9% of the money coming from Beijing's Silk Road Fund.

Coal accounts for 60% of Chinese fuel consumption, but the country is shifting to natural gas to combat chronic air pollution. China is projected to soon overtake Japan as the world's top LNG consumer, which explains why it is investing in gas projects around the globe.

For Russia, the Yamal project is just the beginning. "The Northern Sea Route will become the key to the development of the Russian Arctic region and the regions of the Far East, and by 2025 its traffic will increase 10-fold to 80 million tons," Putin said of a key transport route in his State of the Nation address on March 1. "Our task is to turn it into a truly global, competitive transit artery."

Moscow is also launching a second Yamal LNG project, called Arctic LNG 2, with gas development scheduled to start in 2019. It wants to boost the region's total annual LNG production to 50 million tons by 2030. In November, Novatek and CNPC signed a strategic cooperation deal for Arctic LNG 2. India, now that it is importing Yamal LNG, and Saudi Arabia have emerged as potential partners as well.

Russia is also looking to work with a country that could be hurt by the rise of Arctic transport: Singapore.

The city-state has built its economy around maritime trade and would feel the impact if a lot of traffic is redirected. But the Southeast Asian country's shipping and other technology is attractive to Russia, and there may be opportunities for them to collaborate.

Another Arctic power, meanwhile, is making its own drive for a firmer foothold.

In January, U.S. President Donald Trump unveiled a plan to open almost all American offshore territory to oil and gas drilling, including previously protected areas in the Arctic. Trump made a clear break with the environment-oriented energy policy of his predecessor, Barack Obama, and prioritized resource development. Oil and gas projects in the state of Alaska, which faces the Arctic, are likely to start in 2019.

"We want to grow our nation's offshore energy industry," Interior Secretary Ryan Zinke said of the new policy, signaling the Trump administration's desire to catch up with Russia in the region. Russian soldiers guard a base on the remote Arctic islands of Franz Josef Land.   © Reuters

The wave of international interest in Arctic resources is raising concerns about security. Once again, two military superpowers are staring each other down across the Arctic Ocean, and China's emergence as a third major player only complicates the situation.

Putin has established the Russian Navy's Northern Fleet in Murmansk, an Arctic port city. "We will threaten nobody, but we, using our advantages, in this case those of territorial nature, will ensure the security of Russia and its citizens." Putin said in a documentary shown on state TV in March. "In this respect, the Arctic region is extremely important for Russia."

At the end of March, a Russian anti-submarine aircraft flew to North America via the Arctic for the first time since the end of the original Cold War. The flight sowed tension because the U.S. and the U.K. were conducting submarine drills at the time. Experts took it as a warning to Washington. China has put the neighborhood on notice, too. In January, the government published a white paper titled "China's Arctic Policy." It describes the country as a "near-Arctic state" and an "an important stakeholder in Arctic affairs." In Beijing's view, what happens in the region has a "direct impact" on its interests.

"The utilization of sea routes and exploration and development of the resources in the Arctic may have a huge impact on the energy strategy and economic development of China," the document says.

China has the military capabilities to assert itself. It could, for example, deploy nuclear submarines equipped with ballistic missiles to the frigid waters.

In announcing the Arctic policy, Vice Foreign Minister Kong Xuanyou brushed aside concerns about Beijing's goals. "Some people may have misgivings over our participation in the development of the Arctic, worried we may have other intentions, or that we may plunder resources or damage the environment," Kong said. "I believe these kinds of concerns are absolutely unnecessary."

Countries that are wary of China's economic and military expansion put little stock in such assurances.

"China has yet to announce the ultimate goal of its investment in the Arctic," said Yusuke Honda, research fellow at the Sasakawa Peace Foundation. "The shortage of information makes surrounding countries susceptible to doubts and fears."

In March, Adm. Harry Harris, commander of the U.S. Pacific Command, warned a senator about the ramifications of Beijing's "Polar Silk Road" strategy, saying China "clearly sees the Arctic as a target." Despite having no territory close to the Arctic, Harris said, China "is putting its money where its mouth is." Some countries are tempted by Chinese cash but worried about the strings that might be attached.

As of March, a Chinese consortium was among the final candidates to handle an airport expansion project in Greenland -- an autonomous constituent country of the Danish kingdom.

This was no surprise: During a visit to China in 2017, Greenland Prime Minister Kim Kielsen expressed high hopes for securing Chinese investment. "Our visit to China should be viewed in the context of seeking funding to these future investments," Kielsen said in a meeting with a senior official of the Export-Import Bank of China.

But Denmark, which maintains close relations with the U.S., has raised concerns about Chinese participation in the airport project, clouding the outlook.

While the Antarctic Treaty, signed in 1959, endeavors to ensure peaceful exploration of the region, there is not yet an equivalent for the Arctic. The Arctic Council -- a forum of eight countries including the U.S., Russia and Denmark -- is leading the debate. China, Japan and South Korea have been taking part as "observer states" since 2013.

There have been some promising signs. In 2017, ten parties including the U.S., Russia, Japan and the European Union agreed to ban commercial fishing in the central Arctic Ocean for at least 16 years.

Former Icelandic President Olafur Ragnar Grimsson, now chairman of the Arctic Circle -- a northern version of the Davos forum -- in February said a number of Arctic military facilities have been closed. This, he suggested, should pave the way for more international cooperation.

But the concern remains that rival powers are bumping up against one another in the Arctic. Getting them to play nicely, especially on security, will not be easy.