COLOMBO -- For about three months, confidants of Maldivian President Ibrahim Solih have been holed up in an oceanfront building in Male, sifting through mountains of documents to answer an urgent question: How much money, exactly, does the region's smallest country owe China?

After years of pushing into South Asia with multibillion-dollar Belt and Road infrastructure projects, China is encountering real pushback. Larger nations, too, are having second thoughts and signaling to Beijing that it will no longer be business as usual.

In the Maldives, the uncertainty over the obligations stems from a frosty exchange between Chinese Ambassador Zhang Lizhong and Mohamed Nasheed, a former president and now an adviser to Solih. It reportedly happened a few weeks before Solih's inauguration in November, after his surprise victory over pro-China incumbent Abdulla Yameen.

As Nasheed tells it, Zhang presented the incoming leadership with a note saying the Maldives owed China $3.2 billion -- more than double the $1.3 billion worth of Chinese loans on the official books.

China's Foreign Ministry dismissed the whole story as an "untruth." Either way, those are staggering numbers for an economy that amounts to only $3.6 billion.

"They have huge piles of paper, a foot high, to go through," said a Maldivian source familiar with the investigation of the money trail. The projects under review include a landmark bridge, the expansion of an international hospital, and roads -- all part of a Chinese-funded infrastructure boom in the archipelago known for bright blue waters and luxury resorts.

Underscoring the challenge of determining the true amount, the Maldives' attorney general on Jan. 29 announced the government was seeking foreign help to examine the records. The Ministry of Finance, meanwhile, has set up its own task force to investigate the contracts signed by Yameen, who was swept out of power by voters outraged over alleged corruption. The Maldivian government is investigating the deals that led to the China-funded Sinamale Bridge, originally called the China-Maldives Friendship Bridge.   © Reuters

Yameen's downfall was just one sign that the tide is turning against China in South Asia.

In Pakistan -- home of the largest Belt and Road projects in the region -- domestic frictions, an ethnic insurgency and revelations of billions of dollars in debt above previous estimates are all getting in Beijing's way.

In Sri Lanka, which is caught in an external debt crisis, a government elected based partly on hostility to two major Chinese-backed projects is now actively courting support from Japan and India.

And in Bangladesh, there is a quieter undercurrent of unease over the $24 billion pledged -- but not yet disbursed -- for Belt and Road projects. Some sources say India is urging Dhaka to be cautious about borrowing from China; others say the resistance is coming from fiscal conservatives in the finance ministry, who are loath to let the country's external debt swell. 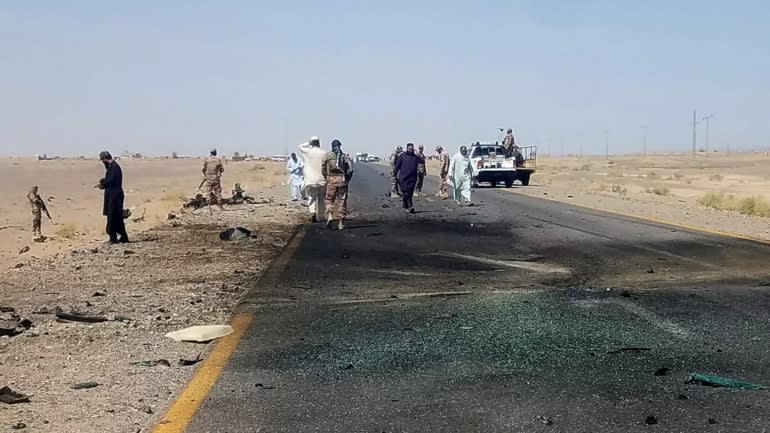 The pushback in Pakistan is the most strident. Jam Kamal, the chief minister of Balochistan, amended laws to freeze the sale of land to Chinese companies in Gwadar, a port city that is the starting point for a $62 billion series of infrastructure projects known as the China-Pakistan Economic Corridor.

The trouble erupted in December, after the Balochistan provincial government was briefed about the CPEC, which will cut through the sparsely populated southern area. Local leaders were shocked to find that their region would see few of the spoils from the Chinese mega project.

"Gwadar is not for sale," Aslam Bhootani, a political leader from the port city, said in a fit of pique.

Baloch insurgents, already locked in a separatist war with Pakistani troops, have essentially declared war on the CPEC as well. Two deadly strikes were directed at Chinese targets in late 2018 -- first a suicide attack on Chinese engineers, then a storming of a Chinese consulate.

China has gambled heavily on the endeavor, and for good reason: The network of roads, railways, power plants and a port will give it coveted direct access to the Indian Ocean. But analysts say Beijing misread conditions on the ground, failing to see how the development would fan existing tensions between the central government in Islamabad and the provincial authorities in Balochistan. Now, the sidelined Baloch are demanding their price.

Michael Kugelman, deputy director of the Asia program at the Wilson Center in the U.S., said Pakistan and China must ensure that vulnerable communities in Balochistan, Sindh, and other marginalized areas are rewarded through employment, basic services, and natural resources stemming from the projects.

"Islamabad and Beijing," he said, "will need to take concrete and actionable steps to address the negative reactions to CPEC." 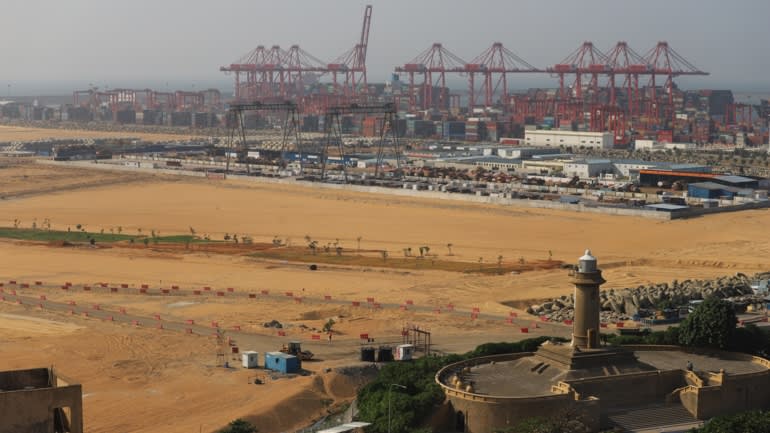 Chinese-backed land reclamation off Colombo is one of two major projects that have stirred controversy in Sri Lanka. (Photo by Yuji Kuronuma)

The parliamentary election in 2015 was a highly charged campaign that questioned two huge Belt and Road ventures: The $1.5 billion Hambantota Port on the southern coast, which is now in Chinese hands after a controversial debt-for-equity swap, and the $1.4 billion Port City, a 269-hectare area of land reclaimed from the waters off Colombo.

Four years ago, Sri Lankans took to the streets to protest the projects, and that wave of anger helped carry the current coalition government to power. Today, there are still pockets of resistance from coastal communities and environmental groups, but even the government has softened its line.

Instead, Sri Lanka seems to be trying to keep China in check by diversifying its development partnerships.

Colombo announced plans in early January for a $1.85 billion light rail system in the capital, to be built by Japan with Japanese concessional loans. Weeks later, India stepped in, offering a new set of trains as part of a commitment to upgrade Sri Lanka's railways through $1.3 billion in concessional financing.

"Money for infrastructure is only available in Asia, so we want to tap all sources"

Sri Lankan officials deny these moves are meant to counter China. Malik Samarawickrama, minister of development strategies and international trade, said they are "not a pushback" but an attempt to broaden the island's sources of funding.

"Money for infrastructure is only available in Asia, so we want to tap all sources," he said, noting the need to "avoid dependence on one source."

Still, there is a widespread perception in Colombo that a predatory Beijing lured Sri Lanka into a debt trap. Chinese infrastructure development loans to the country stand at $9.2 billion.

"The criticism is unavoidable, but it is nonsense," said Luo Chong, head of the political section at the Chinese Embassy in Colombo. Luo contends that China is misunderstood and that "loans for infrastructure funded by the Export-Import  Bank of China are given at 2% interest."

But some financial insiders in Sri Lanka contradict Luo on the 2% interest rate. Sources familiar with the government's negotiations with China said loans for infrastructure projects have come with interest as high as the benchmark London Interbank Offered Rate plus 6%.

Either way, Sri Lanka and its South Asian neighbors are in a precarious position. They would clearly prefer to keep China at arm's length, but they still want the development funding and other benefits from the Belt and Road. 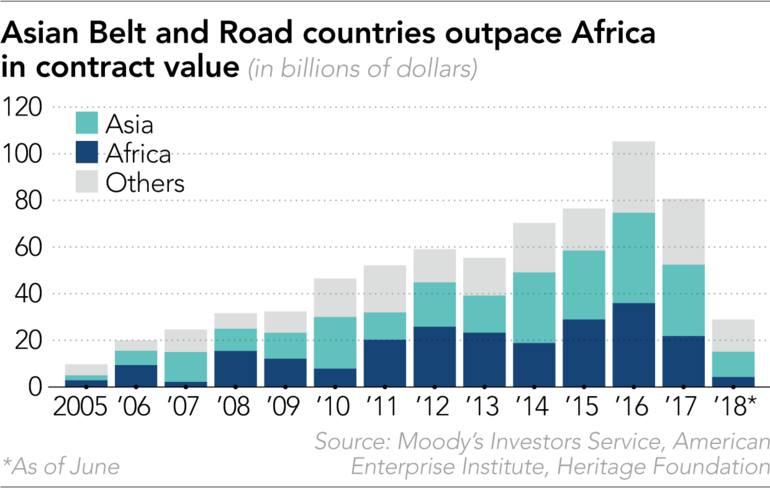 And those much-needed project funds have been increasingly flowing into Asia, outpacing funding for Africa -- another Belt and Road realm. Of the 115 countries the initiative encompasses in some way, Asia accounted for 39% of the contract value from January 2014 to June 2018, higher than Africa's 30%, according to Moody's Investors Service.

The benefits of the Belt and Road are not a mirage, some Asian analysts insist. They see a bias in criticism of the investment drive, shaped by the logic of Western governments and companies that tend to measure success after five years.

When it comes to large and risky projects, one should consider the return on investment over a time frame of "one or two decades, rather than three to five years," said Yan Hairong, an academic specializing in the Belt and Road program at Hong Kong's Polytechnic University. "Chinese companies can think in [longer] terms because they are not pressed by the requirement to maximize shareholder value."

The Chinese Embassy's Luo presented a similar defense. "The projects are planned with a longer vision, over many decades," he said.

Skeptics argue China is seeking not only financial profits but political gains from the infrastructure drive, with its state-owned enterprises leading the way. And the actions of some Chinese companies -- the World Bank blacklisted two big contractors over dodgy business practices -- have not exactly dispelled suspicions over their intentions. These missteps have provided useful fodder for anti-corruption campaigners in countries like the Maldives, helping them pressure governments for more transparency with regard to Chinese-funded projects.

Yet, analysts in Pakistan say the resistance to Chinese projects is outweighed by the sheer advantages for developing countries with pressing infrastructure needs.

The economic corridor initiative, they say, sways opinion in its favor in three ways: energy generation, foreign investment and job creation. Chinese-backed power projects have, quite simply, brought light to parts of Pakistan once plagued by blackouts.

For the countries now linked to the Belt and Road, the challenge is to bask in the light while mitigating the initiative's dark side.