The Yangtze River Delta plan was conceived in 2018 to complement two other megacity clusters -- the Greater Bay Area in the south and the Beijing-Tianjin-Hebei Integration Plan in the northeast.   © Nikkei montage/Source photo by Xinhua/Kyodo
Asia Insight

SHANGHAI -- The Chinese village of Yucun was once an impoverished community polluted by a nearby coal mine and cement plants. Now it is a tourist attraction thanks to the picturesque mountains and lakes that surround it -- and a poster town for some of President Xi Jinping's big plans.

"The average income for folks here has reached 65,000 yuan ($10,000) a year now, up from 8,000 yuan in 2005," said Yu Xiaoping, a Chinese Communist Party official, applauding the village's transformation. "This is where [Xi] first suggested that 'lucid waters and lush mountains are invaluable assets,' back in 2005."

During a government-organized tour for foreign reporters in April, a rainy Yucun was abuzz with domestic tourists -- groups of schoolchildren and seniors arriving by bus. They were shown around a memorial hall with displays on the village's past and CCP slogans.

But there is much more to the area than scenery and history. 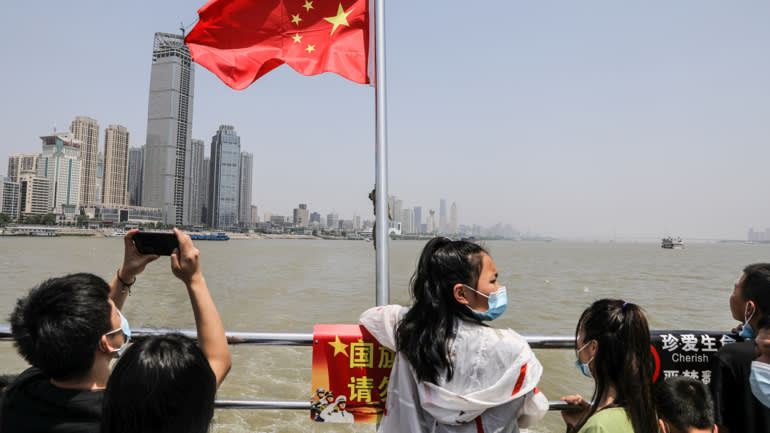 People ride a boat across the Yangtze River during the Labor Day holiday in the Chinese city of Wuhan, Hubei Province, on May 2.    © Reuters

Yucun, in Zhejiang province, is nestled in the Yangtze River Delta -- a region that includes Shanghai and the provinces of Jiangsu and Anhui. The delta has a population of 235 million and accounts for about one-quarter of the country's economic output.

Beijing has chosen the region, about the size of Germany, to lead China's bid to go green and achieve economic self-sufficiency. The Communist Party wants to shift away from an export-oriented growth model, opening up new opportunities for China's domestic market of 1.4 billion people but, potentially, also making it harder for foreign investors to access key sectors.

For centuries, the Yangtze, Asia's longest river, has been a key artery for China's economy. Stretching more than 6,000 km from the Tibetan plateau, the "long river" flows through hubs such as Chongqing, Wuhan and Nanjing before reaching the East China Sea at Shanghai.

The idea Xi espoused in Yucun of accentuating "lucid waters" and other natural assets has since become a mantra in official reports and at national parks across China. Nothing underscores it more than the ambitious target the president unveiled last autumn -- achieving net-zero carbon emissions by 2060. Non-fossil fuels in the primary energy mix will be increased to 20% in 2025, up from 16% in 2020, the government said in March in its 14th Five Year Plan, cutting the nation's reliance on coal, the burning of which accounted for about 80% of China's emissions."

A new development pattern for the integration of the Yangtze River Delta is taking shape," Xi told a symposium last August. He envisaged the region as the trailblazer for Chinese technological and industrial innovation, supporting the "dual circulation" strategy aimed at cushioning the impact of U.S.-imposed sanctions.

The Yangtze River Delta plan was conceived in 2018 to complement two other megacity clusters -- the Greater Bay Area in the south and the Beijing-Tianjin-Hebei Integration Plan in the northeast.

The strategy calls for greater reliance on the Chinese domestic market to generate demand through high-tech innovation and to correct discrepancies with the support of foreign investments. It translates into greater public-private partnerships in key sectors such as automobiles. 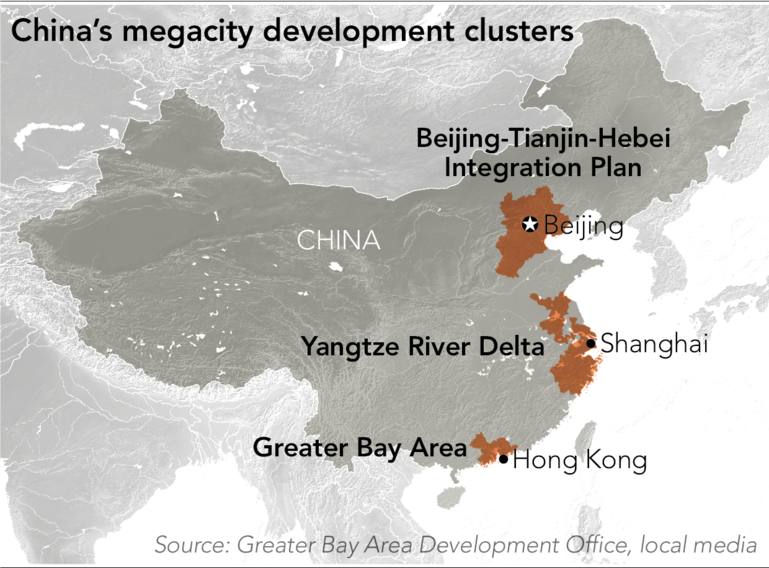 "The government invested in Nio as it could see prospects based on our track record... our business model, technology and management team," Gu said. "As a matter of policy support, several government departments have given us their full backing."

Local governments often compete with one another to attract well-known brands to boost both their image and their coffers.

Anhui is one of the country's most populated provinces, but it has few big names in high-tech manufacturing, critics say. The Nio deal bolstered Anhui, which is home to state-controlled automaker JAC Motors, which assembles Nio vehicles.

As part of the agreement, Nio moved the headquarters of its Chinese operations to the Anhui prefectural city of Hefei.

"Nio has helped set the stage and fulfilled Anhui's position in the development trend of the Yangtze River Delta backed by our company's intelligent manufacturing," Gu said.

While the "Made in China 2025" plan, established in 2015, seeks to supercharge the country's technological prowess in 10 key areas, the dual circulation strategy came amid "new contradictions and challenges brought about by the complex international environment," the official report says.

At the symposium last August, Xi cited integrated circuits, biomedicine and artificial intelligence as key sectors policymakers should prioritize in the Yangtze River Delta. These are also areas emphasized in "Made in China 2025," as well as the 14th five-year plan, adopted in March.

"China has woken up to the reality that its industrial development push might very well be constrained by geopolitical factors," Nick Marro, head of global trade at The Economist Intelligence Unit told Nikkei Asia. "And it's seeking to remedy this." Noblelift Intelligent Equipment Chairman Ding Li says he is expanding assembly lines in China, Malaysia and Vietnam to capture demand for forklifts and other logistics machineries. (Photo by CK Tan)

Based in Zhejiang, Noblelift is China's largest hand pallet truck maker, counting Toyota and Walmart among its customers. The Shanghai-listed company has built up strength by hiring retired engineers from Toyota and Komatsu, and by acquiring Savoye, a French logistic software company. It has factories in Malaysia and Vietnam serving global customers, Ding said.

In April, during the government-organized tour of Yucun, reporters were shown around forklift assembly lines at a Noblelift factory in Changxing County. Workers operated the lines in tandem with robotic arms.

"Without automation, we would need 1,200 workers instead of the current 300 to run this plant," Ding said. "This is a huge saving for Noblelift as the average wage is around 10,000 yuan a month."

"I think the self-reliance campaign adds a greater sense of urgency to the initial goals under Made in China 2025," the Economist Intelligence Unit's Marro said. It "also shifts some of the focus away from competition with international rivals, and more toward control over key supply chains."

The current global crunch in semiconductors has hit Noblelift, but Ding said the company is shifting to domestic brands. 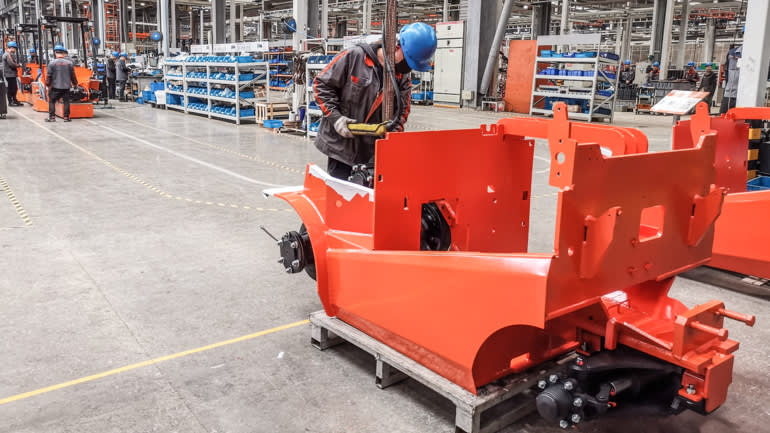 A worker assembles a forklift at Noblelift Intelligent Equipment in Zhejiang Province on April 14. (Photo by CK Tan)

"We convince customers to accept products made with local chips," Ding said. "The price is lower and the quality gap is not big, compared to imported chips from the U.S."

China's dual circulation and self-sufficiency strategies have the international business community concerned, the American Chamber of Commerce in China said in a report last month. AmCham members worry that Beijing will prioritize the acquisition of critical technologies without allowing foreign investors to compete with the technology in China on a level playing field.

The report acknowledges some improvements made by China in the new Foreign Investment Law, which became effective on Jan.1, 2020. "But overall more than two-thirds of our members report they are unsure about improvements or cite a lack of improvement," the report says.

Foreign investment is either banned or capped in sectors including agriculture, automotive, health care services, information technology, legal services, and media and entertainment, the report says. 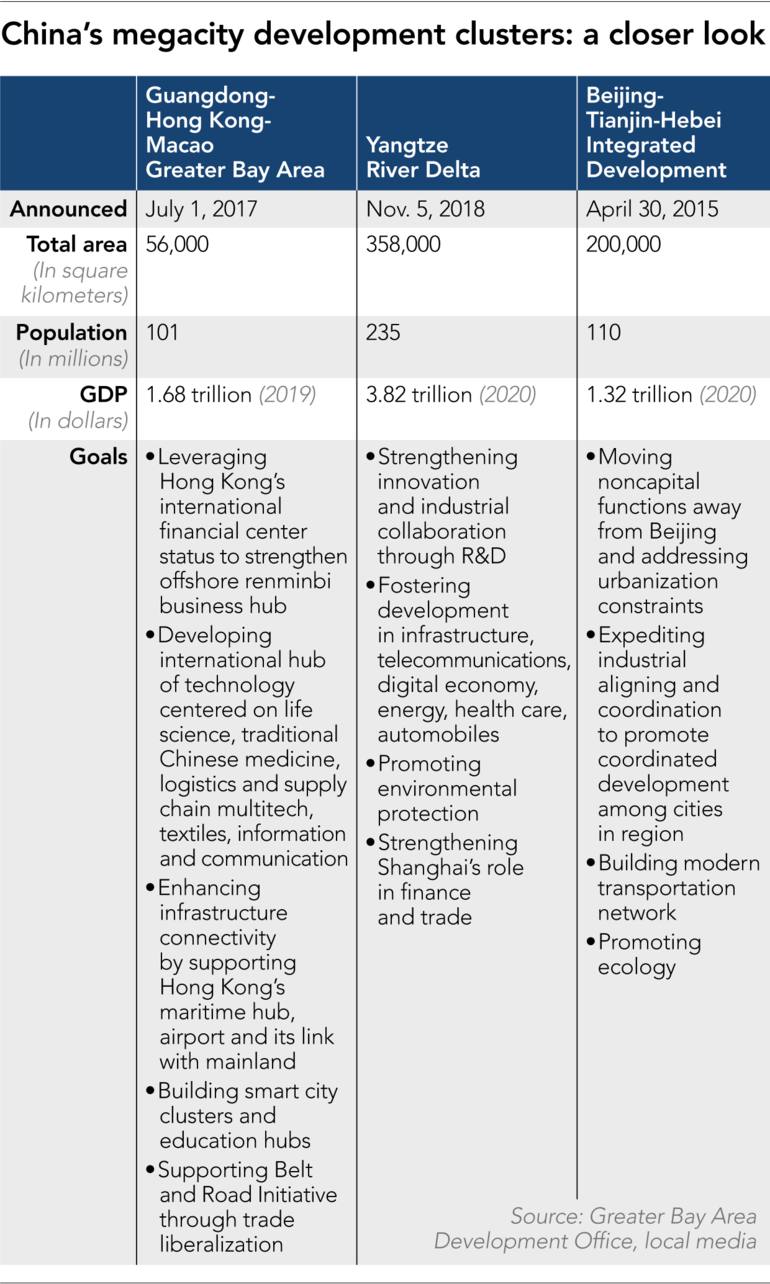 "The policy trend over the past five years -- even before dual circulation -- was around promoting the substitution of foreign vendors with domestic alternatives," Marro said. "A few years ago, this was done a lot more quietly; officials recognized the poor protectionist optics of this industrial strategy. But as U.S.-China technology tensions have worsened, officials have become more comfortable in explicitly promoting this as a policy goal."

Foreign investors are also restrained by their home governments when it comes to investing in cutting-edge Chinese technologies, the result of foreign powers attempting to maintain their leads, most notably in semiconductors, FitchRatings said in a March report authored by Flora Zhu and Jenny Huang.

"The Wassenaar Arrangement that strictly controls the export of weapons and sensitive dual-use goods and technology to nonmember countries, particularly to China, would also constrain foreign investors' ability to bring in the most advanced technology to China," the report says, referencing the voluntary export control regime signed by countries including Germany, Japan and the U.S.

"Moreover," the report goes on, "domestic investment alone may not be enough to help China narrow the technological gap, as production of high-tech products usually involves collective efforts by companies of various origins along the supply chain."

Ding, the chairman of Noblelift, the hand pallet truck maker, couldn't agree more. "Nobody can survive alone under decoupling," he said. "Our markets are in Europe and the U.S."