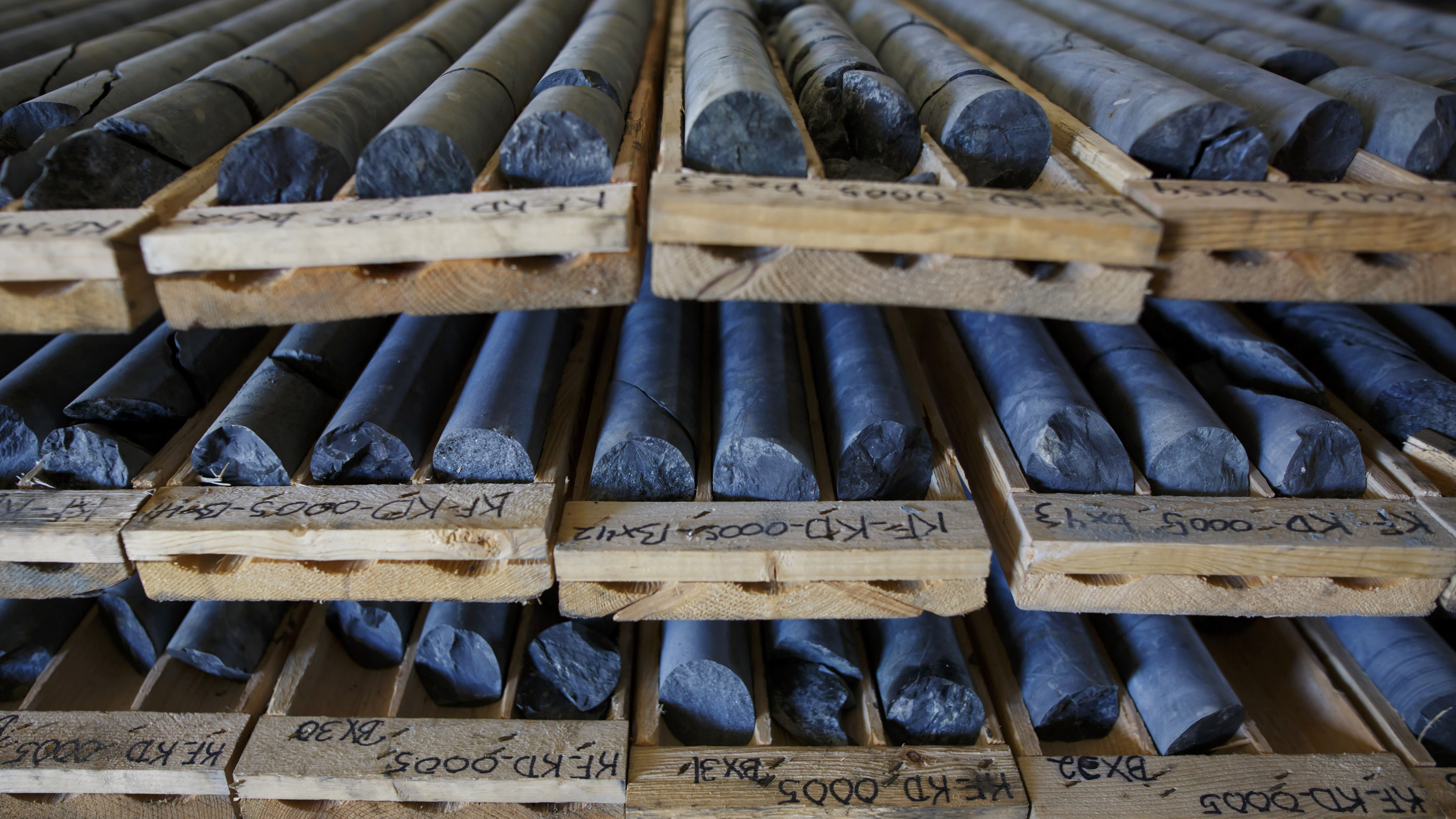 Each electric car battery requires about 10 kg of cobalt -- a fact that has dramatically increased the importance of the metal.   © Getty Images
Asia Insight

TOKYO/HONG KONG -- The equation could not be simpler. Electric cars are widely considered the future of the auto industry. Each electric car battery requires about 10 kg of cobalt. Control the cobalt supply, win the future.

China, clearly, has done the math.

Most of the cobalt produced in the Democratic Republic of Congo -- the world's top source of the metal by far -- is purchased by Chinese companies like Zhejiang Huayou Cobalt and refined back in China. The strategy appears to be to control the supply chain so that electric car production is virtually impossible without Chinese involvement.

"If cobalt falls into the hands of the Chinese, yeah you won't see EVs being produced in Europe, etc.," Ivan Glasenberg, the chief executive of Swiss miner Glencore, warned in March at the FT Commodities Global Summit.

The strategy may be simple, but countering it is not. One possibility lies in blockchains -- the digital ledgers that underpin cryptocurrencies like bitcoin.

This technology could radically change the way the metal is produced and procured. The latest sign of China's determination to corner the market came on July 8. Citic Metal, a subsidiary of state-owned investment company Citic, finalized a decision to acquire a 19.5% stake in Ivanhoe Mines, a Canadian resources developer. Ivanhoe intends to use the money to develop mines in Africa.

The prizes are mines in the copper belt of southern Congo. Cobalt is usually produced as a byproduct of copper and nickel mining.

There is, of course, more to China's plan for becoming an electric vehicle powerhouse. One aspect is to marshal technologies from around the world.

Chinese President Xi Jinping pledged at this year's Boao Forum for Asia to open the country's doors "even wider" and ease restrictions on foreign investment in the auto industry. China will scrap, possibly by the end of the year, its 50% cap on foreign ownership of local auto manufacturing ventures. Elon Musk, the head of pioneering U.S. electric car maker Tesla, praised the Xi administration's moves. "This is a very important action by China," he tweeted.

Still, cobalt holds the key, as it is a critical component in the cathodes for lithium-ion rechargeable batteries.

On the supply side, the politically unstable Congo accounts for 60% to 70% of the world's cobalt production, and a sharp increase in output is not expected. This has prompted fears of a supply shortage, driving up the international cobalt price threefold in three years to $40 per pound. Glencore may have concerns about Chinese dominance, but business is business. In March, the Swiss company signed a supply deal with Shenzhen-listed battery recycling company GEM. Over three years, Glencore will provide the Chinese client about 53,000 tons of cobalt, equivalent to a third of its estimated production for the 2018-2020 period.

Alarmed by China's tightening hold on the market, some vehicle manufacturers and other companies are rushing to secure their own cobalt sources. BMW and Volkswagen are reportedly in talks with mining companies about long-term contracts.

Apple, which uses lithium-ion batteries in its iPhones and other products, has also been approaching miners directly, according to reports by Bloomberg and other news organizations. The U.S. company, the reports said, is seeking contracts for several thousand tons of cobalt a year over periods of at least five years. 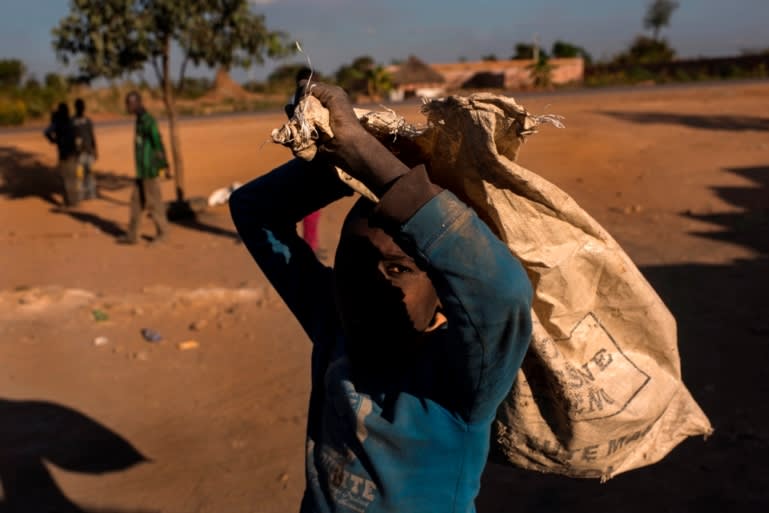 A boy carries a bag of cobalt-laden dirt and rock in the Democratic Republic of Congo, which accounts for more than 60% of the world's supply.   © Getty Images

Cobalt mining is notorious for the use of child labor -- specifically at small-scale "artisanal" mines in Congo, one of the world's poorest countries. In 2016, Amnesty International reported that cobalt mined by children is likely ending up in smartphones and other products manufactured by global electronics companies.

Buying directly from mines is one way to sidestep the China-controlled supply chain. Blockchains could help with this too, potentially creating a fairer, more responsible, sustainable industry. "Artisanal" may sound quaint, but the reality is often harsh. Children who cannot afford to attend school use basic tools to dig out rocks from tunnels deep underground. The miners are as young as seven, according to Amnesty, and earn only $1 to $2 for 12 hours of work in hazardous conditions.

The Amnesty report cited Congo Dongfang International Mining, a wholly owned subsidiary of Huayou Cobalt, as "one of the largest companies at the center of this trade."

Singled out by Amnesty, China embarked on establishing a fair trade system for cobalt production. At the end of last year, the China Chamber of Commerce of Metals, Minerals and Chemicals Importers and Exporters launched a Responsible Cobalt Initiative to set standards for a cleaner supply chain.

Besides Huayou Cobalt and other Chinese players, Apple, Sony, Volvo Cars and other high-profile cobalt users have joined the project. In April, Daimler announced it would take part too.

Yet, though major cobalt consumers from the U.S., Europe and Japan are working with China to tackle the problem of child labor, some have their doubts about the initiative.

"Chinese companies now claim they don't use cobalt that may be tainted by child labor," an executive at a major Japanese trading house said on condition of anonymity. "But it seems that tens of thousands of tons of such cobalt are still imported into China."

The executive added that "many Chinese companies want to buy such cobalt because of the lower prices," especially now that overall prices are soaring.

This brings us to blockchains. 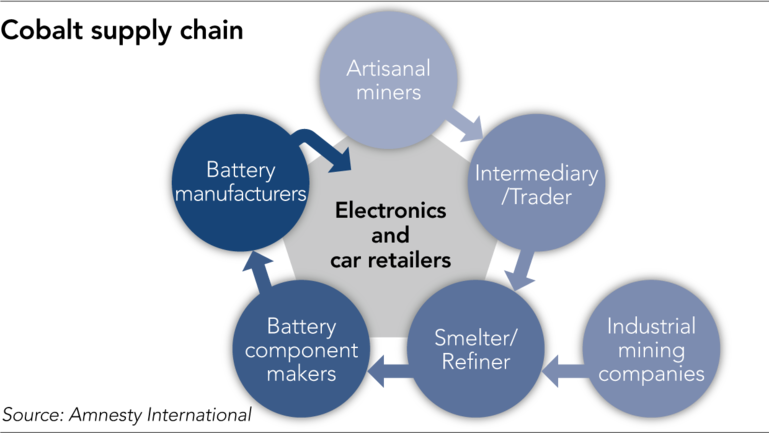 The technology is seen as a potentially powerful tool for eliminating child labor from the cobalt supply chain, while ensuring manufacturers know what they are getting when they buy direct. Basically, blockchains would be used to track cobalt's journey from the mines all the way to the lithium-ion battery charging up in your garage.

In April, British consultancy RCS Global launched a blockchain-based pilot project to do just that.

A blockchain is a shared database that acts as a record of interactions between users. Once registered, transactions cannot be changed or deleted, making it essentially impossible to manipulate the ledger. The technology is increasingly seen as a way to enhance supply chain management.

RCS Global's system combines the blockchain with electronic tagging to follow up to five supply chains for major cobalt users, starting in small or artisanal mines in Congo. Constant monitoring allows for instant alerts if any illegal processes, including child labor, are detected.

The names of participating companies have not been revealed, but multiple major Western automakers are reportedly on board, along with smartphone manufacturers and a leading Chinese cobalt refiner.

Nicholas Garret, RCS Global's chief executive, told the Nikkei Asian Review that "the project is designed to inject greater transparency into the cobalt mining business, and to establish a system that verifies that transactions adhere to ethical and human rights standards." Global companies face strong pressure from investors and consumers to ensure ethical sourcing. In response to calls from stakeholders, Apple has started disclosing its cobalt suppliers.

Panasonic, which supplies car batteries for Tesla, has joined the Responsible Minerals Initiative, another project aimed at establishing a protocol for cobalt supplies. "By taking part in the RMI, we are requesting all our suppliers to identify the refineries through their supply chains and provide related information to us," a Panasonic spokesperson said. 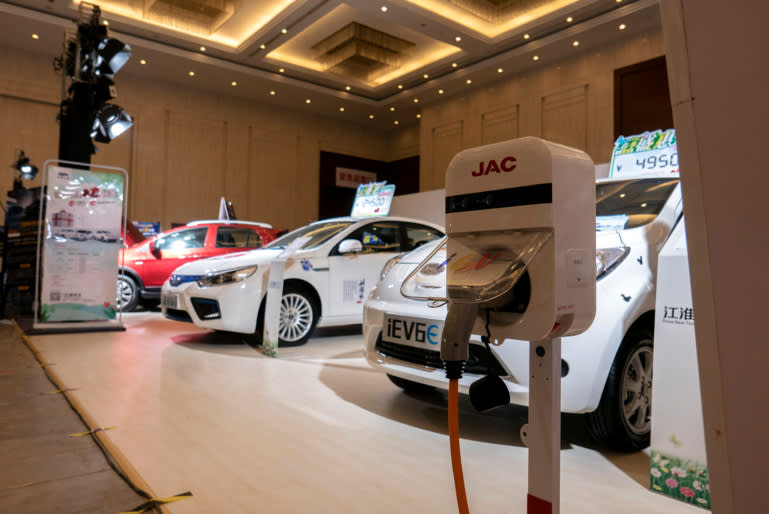 China has made electric cars and other new energy vehicles a priority, as it seeks to build up its auto industry.   © Getty Images

Rob Lederer, executive director of the Responsible Business Alliance, which manages the RMI, argues that "responsible procurement is an inevitable cost of doing business." But he said that "the industry needs to provide tools for ethical sourcing so that a single company does not have to shoulder all the cost."

The blockchain could be one of those tools.

Huayou, he said, is not making any such investment.

"At the end of the day, conflict cobalt is still conflict," Lee said, referring to the commodity's reputation as a conflict mineral due to long-running strife in the main producing country. Huge investments in tracing systems "would have been better used in improving the livelihood of Congo."

For manufacturers, ensuring transparent and ethical cobalt trading is more complex than simply keeping materials mined by children out of their supply chains. It is a challenge they need to confront, according to Nobuya Endo, managing director and head of global equity beta solutions at State Street Global Advisors.

"If companies pay serious attention to environmental and social problems, potential risks will be eliminated," Endo said. This will make it "easier for investors to take risks in their investment decisions."