TOKYO/PARIS -- The World Nuclear Exhibition is the go-to place to glimpse the future of atomic energy. This year's attendees found a window on tomorrow in a location not everyone expected: the China pavilion.

The event, held over three days in late June near Paris' Charles de Gaulle Airport, brought together the biggest names in the business. But it was the Chinese section that seemed to steal the show, with large exhibits by China National Nuclear Corp. (CNNC) and China General Nuclear Power (CGN).

"The biggest reaction we see from the visitors is surprise," a CNNC employee told the Nikkei Asian Review. "They are surprised to see that our technology is so advanced and that we already have some nuclear plants under construction. It is a pity that people are so unfamiliar with our technology."

CNNC displayed a scale model of its HPR1000 pressurized water reactor. Behind it, a high-temperature gas-cooled reactor was presented as a hologram in a black box. Visitors from around the world asked a steady stream of questions.

"It's very important for us to come and promote our brand," the employee said. "Unlike countries like France, China is still a newcomer on the market for nuclear reactors."

It may be a newcomer, but China is making waves nonetheless.

As of mid-June, the country had 40 operational reactors, according to the International Atomic Energy Agency -- the fourth most worldwide. It also had the most reactors under construction by far, at 17, followed by India's seven.

In 2030, China is expected to be running more than 100 reactors. And this does not count the projects it is pursuing far beyond its borders. CNNC displays a model of its HPR1000 pressurized water reactor at the World Nuclear Exhibition on the outskirts of Paris on June 26. (Photo by Tallulah Lutkin)

In May, CNNC Chairman Wang Shoujun signed a memorandum of understanding with Uganda's energy minister to cooperate on nuclear power. The East African country has zeroed in on nearly 10 potential sites for nuclear plants, in anticipation of economic growth and increased electricity demand.

Meanwhile, CNNC is also stepping up cooperation with Saudi Arabia and Argentina.

China has been preparing for such endeavors by soaking up as much technology and expertise as possible.

Consider the Taishan Nuclear Power Plant, which was just successfully connected to the grid on Friday. The facility, in the city of Taishan in China's southern Guangdong Province, features European Pressurized Reactors developed by what was then Areva, the French nuclear company. The No. 1 unit is capable of generating 1.75 million kilowatts, making it one of the most powerful reactors anywhere.

The Taishan project is 70%-owned by China and 30% by French utility EDF.

Xavier Ursat, an EDF executive, tweeted in French in early May: "In China with our partner CGN, I salute the efforts and commitment of the French nuclear team working on Taishan's EPR, which will be the first of its kind to be put into service in the world."

China is ahead of the game even though construction of EPRs started earlier in France and Finland. Those projects have hit snags.

Last October, TerraPower, a nuclear reactor design company headed by Microsoft founder Bill Gates, reached an agreement with CNNC to establish a joint venture for studying a "fourth-generation" technology: traveling wave reactors. TWRs promise a new level of efficiency because they are fueled by depleted uranium, which would otherwise be discarded.

The joint venture, Chinese Premier Li Keqiang said, "is a leading-edge program for U.S.-China cooperation in the field of high technologies." 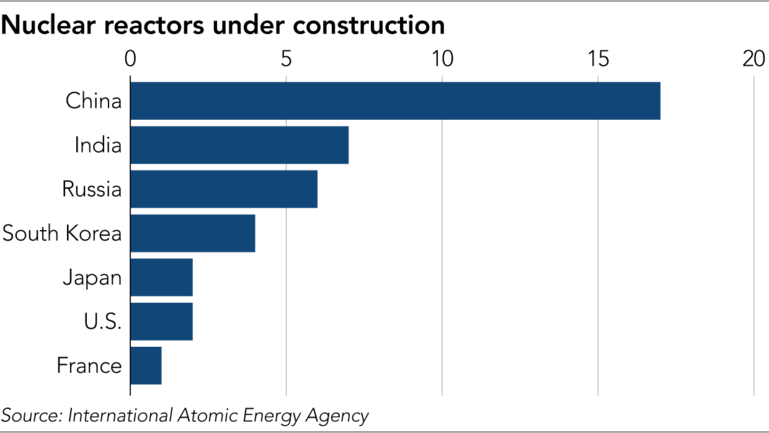 Electricity output projections support the notion that China is destined to become a nuclear energy superpower.

Demand in developed economies is set to decline as they use more renewables and less electricity overall -- pulling down the global ratio of nuclear to total power generation to 10%, from 11%. But the Asia-Pacific region is likely to more than make up for that shift.

And these numbers tell only part of the story.

Mark Hibbs, senior fellow of the Nuclear Policy Program at the Carnegie Endowment for International Peace, explained that while China used to replicate others' nuclear technology, the country has entered a new phase.

"The Chinese are now in a premium position to be able to make changes and make innovation in this technology of an evolutionary nature," Hibbs said. "They are not making dramatic breakthroughs in the technology, but they are refining the technology that they have inherited." China's quest is not only about improving safety and efficiency. "They are doing this also to establish [their own] intellectual property in this area," Hibbs said. "Depending on how successful they are, [Chinese technology] could have a profound impact on the future of nuclear power."

The first is increased electricity demand stemming from industrialization and the growth of the service economy. The IEA forecasts China's electricity needs will increase at an average annual rate of 2.2% through 2040. Beijing sees nuclear reactors as essential for meeting those needs.

Second, China is determined to solve its smog problem. So the government has positioned nuclear, solar and wind power -- none of which emit air pollutants or carbon dioxide -- as core alternatives to coal-fired power plants.

The desire to seize global contracts is the third reason. China's ambitions are no secret.

Before striking the deal with Uganda, it concluded an agreement on peaceful nuclear power cooperation with Thailand in 2017. The previous year, China agreed to participate in three nuclear plant projects in England, in partnership with EDF.

In terms of capital contributions, China is a minor player in two of them -- Hinkley Point C and Sizewell C. But it is a majority stakeholder in the other one, Bradwell B, and is to install a Chinese-made reactor called the Hualong One. Smog envelops the Forbidden City in Beijing. Air pollution is one reason China is pushing the construction of nuclear power plants.   © Reuters

The England deals "were symbolic developments to mark the first step in the advance of Chinese-made nuclear power plants into overseas markets," said an official of a relevant international agency.

So can China expect smooth sailing from here? Some harbor doubts.

Hibbs said that back in 2005, China decided to accelerate nuclear power plant construction based on three assumptions: that economic growth would continue at a 10% clip, that there would be no more major accidents like Chernobyl and Three Mile Island, and that there would be a "global nuclear renaissance" with more countries embracing the technology.

Much has changed, especially after the Fukushima disaster in 2011, which prompted some governments to shy away from nuclear energy.

"It would be a mistake to assume that the Chinese will just continue to move on the way they have done over the last 20 years, and that their nuclear program in the next 20 years will be on autopilot," Hibbs said.

Even so, China's momentum threatens the current industry leaders.

"Chinese-made nuclear power plants are inexpensive and are catching up technologically with those from developed countries," a Japanese government official said.

Japan, France and other advanced players face uphill battles to export their reactors. Although a British project involving Hitachi has made headway, a project involving Mitsubishi Heavy Industries in Vietnam was scrapped due to strong opposition from local residents.

The outlook for a Mitsubishi Heavy-led project in Turkey is also uncertain due to swelling construction costs.

In the meantime, China and Russia look poised to swoop in on more opportunities in emerging countries, offering low-cost plants and relatively lax loan conditions.

Ryuzo Yamamoto, a professor at Tokoha University, explained that nuclear power plant builders face two hurdles. One is the risk of construction delays and ballooning costs. The other is the matter of selling the electricity once the plant is completed. "For the latter, the government often guarantees the sale of electricity. For the former, however, builders are forced to shoulder the responsibility. Unless a government takes the initiative in [supporting] nuclear plant projects, builders balk at taking the risk."

This leaves Chinese and Russian players a window of opportunity. But since nuclear power is closely linked to national security, some are sounding the alarm over their advances.

As the world relies more on China and Russia for atomic energy, "Technology may be disrupted in developed countries like Japan, the U.S. and France if they hardly build plants domestically and are slow to export them," warned Hideo Kubota, executive chief researcher at Tepia Research Institute. "If nuclear power plant technology is held by China and Russia alone, it would spur concerns."

Decades down the road, Kubota added, countries like Japan that may have "lost the technology" might find themselves in an uncomfortable position. They "may find it necessary to build new nuclear power plants and find themselves considering importing them from China."

Researcher Zvjezdana Odobasic in Vienna contributed to this article.