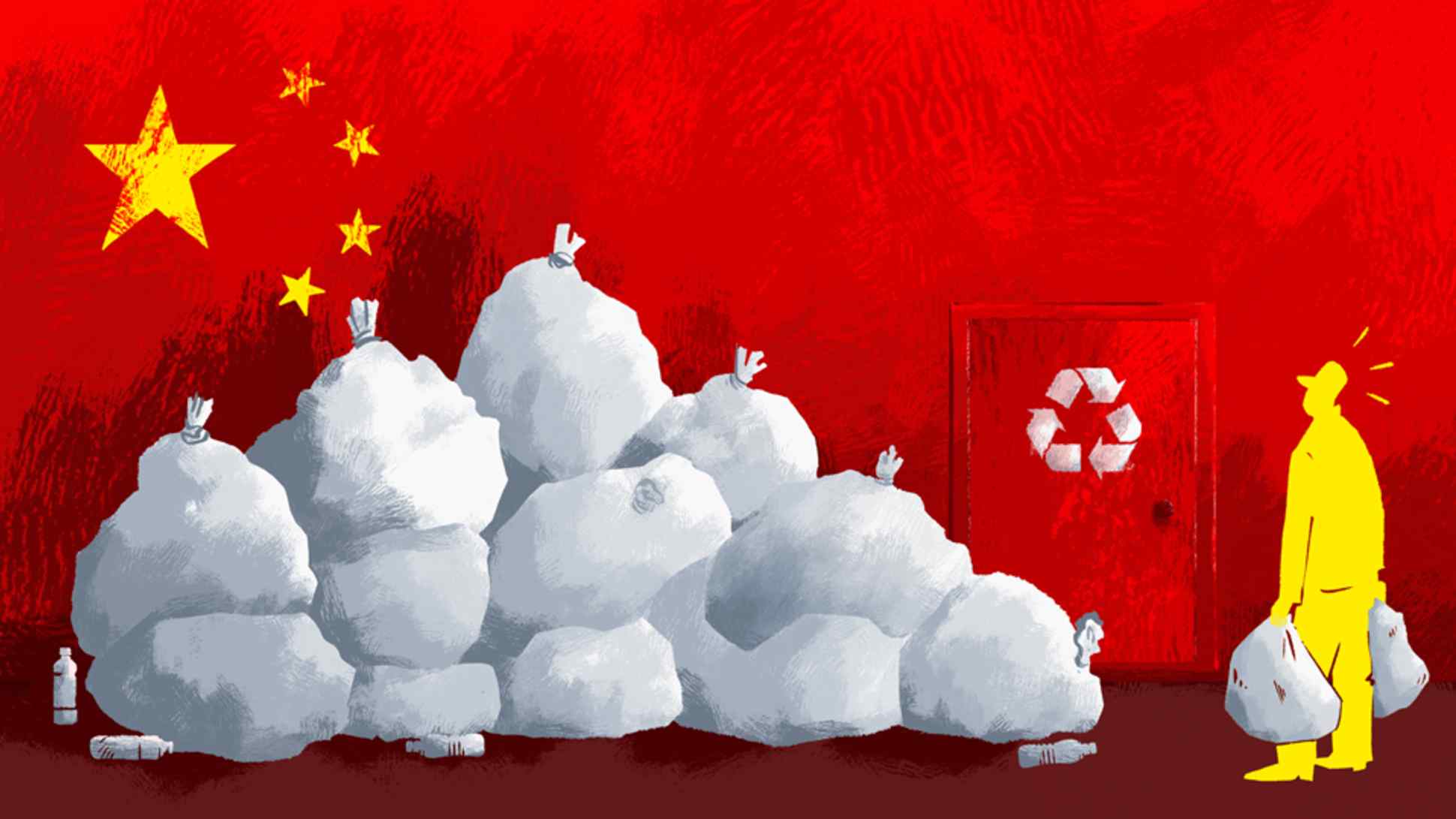 Thailand and Vietnam struggle with redirected waste but is there a silver lining?

HONG KONG/BANGKOK -- The world is awash with scrap plastic, six months after No. 1 importer China closed its doors to the recyclable materials on environmental grounds.

The ripple effects are hitting the shores of Southeast Asia's emerging countries, which have seen a surge in plastic shipments -- not all of them legal. "Thai people are angry that Thailand is becoming a place to dump the waste of other countries," said Surapol Chamart, the Industry Ministry's chief inspector-general.

TV news footage has fueled that fury, showing a Bangkok Port Authority raid on mostly plastic waste believed to have been smuggled in. As of early June, the authorities had uncovered hundreds of containers of plastic. Officials were shown opening the door to a container and reeling from the foul odor.

The reports were particularly infuriating given a separate incident in Thailand around that time, in which a dead whale was found to have ingested 80 plastic bags.

Thailand is hardly alone. In Vietnam, as of May, Ho Chi Minh City's Tan Cang Cat Lai port had been saddled with over 2,200 containers of impounded trash for more than 90 days. Another 900 containers had been there for a shorter period. 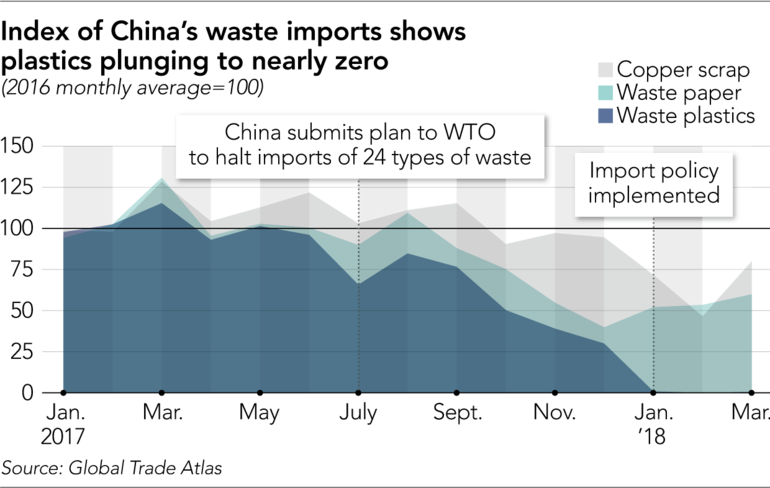 The impact is being felt well beyond Asia, too.

Poland has faced more than 60 highly toxic fires at dumps this year, with officials saying they think many were set deliberately to destroy smuggled rubbish. And in the U.S., particularly in West Coast states like Oregon, scrap plastic that cannot be sent abroad is instead heading to landfills, where it will not be recycled.

Clearly, China's move to ban imports of plastic and certain other waste at the beginning of 2018 has been a game changer for the global recycling system.

Until recently, China was the largest and most important handler of recyclable plastic. In 2016, the country imported roughly 8 million tons, accounting for more than half of global imports, noted Michikazu Kojima, a senior economist at the Economic Research Institute for ASEAN and East Asia. Advanced countries like the U.S. and Japan depended on China to take their waste.

China, in turn, used the world's plastic trash as a cheap resource. Plastic bottles, for instance, were washed and shredded into flakes before being sent there. In Chinese factories, the flakes were heated and turned into textiles or filling for pillows, quilts and dolls. The market value of China's plastic waste imports approached $36 billion in 2015.

But in July of last year, China submitted a plan to the World Trade Organization, saying it would stop importing 24 types of waste. With the implementation of the plan in January, China's plastic imports have dropped to virtually nil.

Initially, few outside of the recycling industry paid much attention to the policy change. Now it is a global issue, affecting lives and businesses in myriad ways, with the world's rubbish flowing in new directions and even vanishing without a trace. Policymakers have their hands full, as they are forced to come up with more responsible means of waste management.

"The abrupt China ban leaves [Southeast Asian] countries unprepared to receive the huge influx of waste," said Steve Wong, managing director of Fukutomi, a plastic recycling and trading company in Hong Kong. "Containers of plastic scraps are often found stuck in the water near the ports due to the lack of port facilities and qualified disposal plants. In some extreme cases, shipping companies would abandon the containers so they don't have to bear the expensive parking fees."

Capacity-wise, Wong said Southeast Asia cannot handle even half of the volume China imported in the past.

Data from the Global Trade Atlas leaves little doubt that Thailand is bearing a heavy burden. From January to March 2018, the country imported 121,000 tons from Japan, the U.S. and the European Union -- 17.7 times the amount for the same period a year earlier.

Malaysia saw a fourfold increase, while Vietnam, Taiwan and South Korea have all seen significant influxes since the start of the year. Compare these changes to the more than 90% decreases for China as well as Hong Kong -- a key gateway to the mainland. 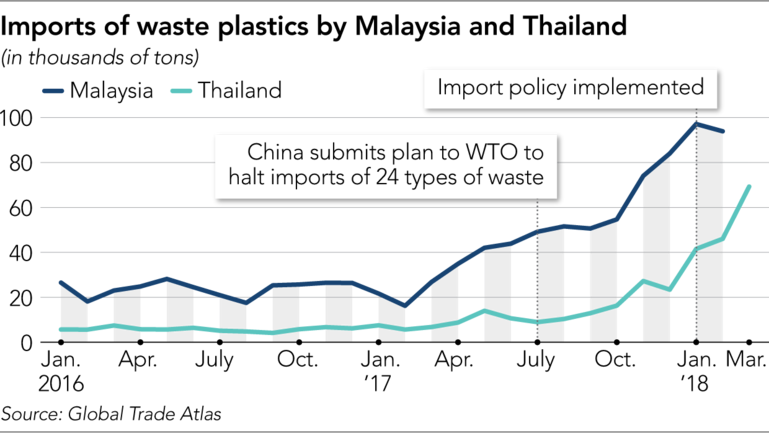 Companies that deal with the waste have swung into adjustment mode.

Wong estimates 1,700 licensed recyclers in China have been affected by the import ban and that 30% to 40% of them have moved their operations to Southeast Asian countries including Malaysia, Thailand and Vietnam. Fukutomi had three factories for recycling plastics in mainland China but shut them all down by last year. Instead, in the past two years, the company has opened a pair of factories in Malaysia and Vietnam.

A senior official at Thailand's Industry Ministry confirmed the trend, saying, "Up to 1,000 Chinese businessmen are asking for licenses to do recycling in Thailand, with total investment of up to 250 million baht ($7.6 million)." 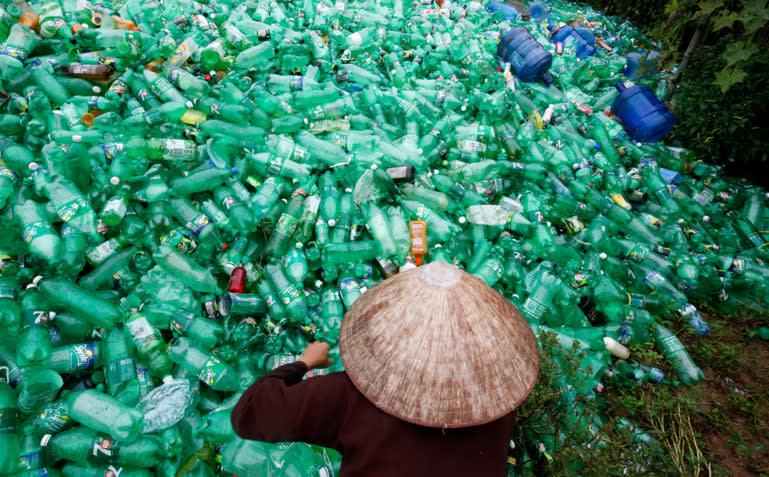 Thailand has put licensing on hold indefinitely and, according to the ministry official, rebuffed attempts by the Chinese businesspeople to acquire land. As of June, the authorities had also revoked the import licenses of five out of seven plastic waste importers.

In Vietnam, Natural Resources and Environment Minister Tran Hong Ha argued in the National Assembly in June for steps to stop scrap imports that are threatening to "turn the country into a landfill of industrial and radioactive waste."

"Enough is enough," Polish Prime Minister Mateusz Morawiecki told a news conference on May 28. His government intends to take decisive measures to stop illegal dumping. "This is something that very seriously contributes to environmental pollution," the prime minister said.

China is determined to keep its gate shut.

The authorities have launched a project called National Sword to prevent smuggling, along with a related initiative targeting "foreign waste" dubbed Blue Sky 2018. In May, they seized 606,500 tons of plastic and mixed metals, arresting 137 smugglers, according to local media. These projects were initiated by Chinese President Xi Jinping himself. But why did his government turn against the industry?

Nearly 30 towns across China had been processing imported plastic waste, according to the 2016 documentary "Plastic China." Garbage collectors and their families worked under stifling conditions, with various ill effects on their health and the environment.

"Plastic China" was banned in the country. But Kojima, the economist, said the rumor in the recycling industry is that Xi saw the film and resolved to change the situation, as part of his grand plan to establish China as a global superpower.

On top of the ban imposed in January, the government announced in April that it would prohibit 16 more items by the end of the year, including the scraps of discarded automobiles and electric appliances. A further 16 are to be banned by the end of 2019.

Despite the challenges created by the crackdown, Beijing may be doing the world a favor in the long run. Advanced countries are being forced to recycle more plastic locally and find sustainable ways to deal with their waste, now that they cannot simply ship it off to China. Thai authorities are on the hunt for plastic and other garbage brought into the country illegally.

There is no denying the heavy cost burden. Disposing of 1 ton of plastic bottles in mainland China cost around $200, but the expense can reach as high as $500 in developed economies -- provided the proper facilities exist. Labor shortages in more mature markets are another problem.

Nevertheless, it seems there is no turning back. Battling plastic pollution was a focus of this year's World Environment Day, on June 5. In May, the EU announced a plan to ban single-use plastic products like straws and cotton swabs.

Seen in this light, China's ban is not so much an industry-shaking departure from standard practice, but rather one element of a worldwide shift toward more cautious use of plastics.