Wealthy grow wealthier while millions are trapped in low-level jobs

HONG KONG -- Chen Lulu, a migrant worker raising a 3-year-old son in the southern Chinese city of Shenzhen, knows where to find a bargain. She buys everything from an umbrella to toilet paper on Pinduoduo, an online shopping site known for cheap products. At the supermarkets of the tech metropolis, the same items are beyond her means.

"The living costs in Shenzhen are soaring," Chen said, "but it is becoming harder to make money."

There is a certain irony in her use of Pinduoduo to scrape by.

In the past decade, China's internet boom has spawned a long list of billionaires. Pinduoduo founder Colin Huang is one. His net worth stood at $9.89 billion after a $1.6 billion initial public offering in the U.S. in July. But this impressive wealth generation is doing little to lift the country's neediest people. On the contrary, many are stuck with grim job prospects in a slowing economy threatened by the escalating trade war with the U.S.

In Chen's case, while her rent has almost doubled in the last three years, her income has only increased by a few hundred yuan. This is partly because nail salons are forced to compete with heavy price cuts, since customers use discount websites to find deals.

China's Gini coefficient tells the story of the social imbalance.

The index, which measures wealth and income distribution, had been improving since 2008 but has worsened over the past two years. A coefficient above 0.4 is seen as a warning sign of dangerous inequality, accompanied by increased risk of social and political instability. China's figure was 0.467 last year, up from 0.462 in 2015, according to the state statistics bureau.

Many academics and independent institutions believe the real figure is higher than the government's measurement. Zoom in on the figures and you will find an even more worrisome picture. The top 1% of the population controls one-third of China's wealth, while the bottom 25% holds less than 1%, according to data compiled by Peking University in 2016.

While mainland Chinese spent over $115 billion during more than 130 million overseas trips last year, over 300 million consumers -- roughly one third of all consumers -- hunt bargains on Pinduoduo. These less visible citizens, many of whom live in remote villages and lower-tier cities, have been left out of a rapid economic transformation experts say mostly benefits the upper-middle class.

China's economic emergence has lifted millions out of poverty, but its more recent shift from conventional manufacturing toward value-added industries is widening the income gap anew. Tech companies reward their CEOs and engineers with generous pay packets, but untold numbers of front-line workers receive the equivalent of crumbs. This includes delivery personnel for e-commerce sites and ride-hailing drivers. 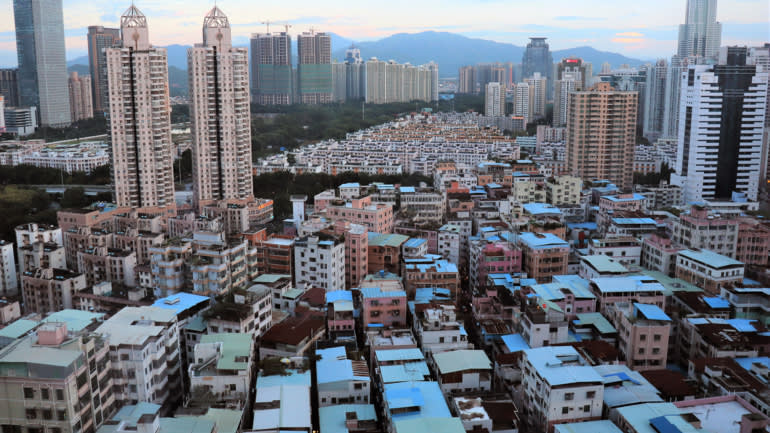 Migrant workers in China typically reside in shanty towns like this one in Shenzhen. (Photo by Nikki Sun)

"The boom in China's internet-based service industry is built on the exploitation of cheap labor," said Ling Minhua, assistant professor at the Chinese University of Hong Kong. Yes, many factory workers have made the switch to the online services sector. But Ling said this often entails greater mental and physical strain with fewer welfare benefits.

China's top three food delivery platforms -- backed, respectively, by tech giants Tencent Holdings, Alibaba Group Holding and Baidu -- had hired a total of over 1 million scooter riders as of the end of 2017, according to research company DCCI. And Didi Chuxing, the country's largest ride-hailing app, had signed up more than 21 million drivers.

Chen Jinhui spends more than 10 hours a day on his scooter, delivering food for Meituan Dianping -- China's largest on-demand meal delivery platform. He earns about 7,000 yuan a month, more than what he made as a factory worker, but he is not happy.

"There is lot more pressure. We can't be late for one minute," the 21-year-old told the Nikkei Asian Review while grabbing a bite at a noodle shop. He said he often has to run red lights or drive in the wrong direction to reach his destinations in the required time. A food deliveryman for Meituan Dianping waits in front of a restaurant in Shenzhen. (Photo by Nikki Sun)

If he spills the food or shows up late, he ends up paying for the meal. But what frustrates him the most is the lack of opportunities to climb the ladder. Since he has learned no new skills on the job, there is nothing else he can do at the tech-driven company.

Andy Xie, an independent economist in Shanghai and former head of Morgan Stanley's Asia-Pacific economics team, argues against the very nature of these internet-based services. "They are only changing the format, not innovating the core technology," he said. "To me, mobile payment is not fundamentally different from traditional card payment."

Technology is supposed to save labor and help achieve economies of scale, yet the services are operating on the backs of huge numbers of low-level workers. And despite high market valuations, profits are hard to come by: Meituan lost 19 billion yuan in 2017, while Didi lost 4 billion yuan in the first half of this year.

Xie warned that the front-line workers will suffer first should the internet bubble collapse.

Still, they are the lucky ones compared with migrants in traditional manufacturing industries or those still trying to eke out a living in the countryside. The average villager earned one-third of what urbanites did in 2017, with an annual disposable income of 13,432 yuan. Beijing is determined to fight extreme poverty, with President Xi Jinping having vowed in 2015 to wipe it out by 2020. That means no Chinese citizen would be living on less than 2,300 yuan a year; about 30 million people were still under that poverty line at the end of 2017.

Xi's goal is starting to look like a long shot, considering the risk of mass unemployment in the manufacturing sector as the U.S. trade war intensifies. More than 30% of China's 287 million migrants worked in the export-driven sector last year.

The consequences of the trade war could be staggering. JPMorgan estimates China would lose 700,000 jobs if the U.S. imposes 25% tariffs on $200 billion worth of Chinese goods. This is based on the assumption that China would devalue its currency by 5% and slap levies on U.S. goods; the job losses could swell to 3 million if China decided not to retaliate.

Li Shi, an economics professor at Beijing Normal University, said the gulf between the cities and the countryside has narrowed thanks to the extra money earned by migrants. If the workers are unable to raise their incomes, or if they lose their jobs, the urban-rural divide would widen again and the Gini coefficient would worsen.

"The most dangerous situation is that only high-income people get richer but incomes for poor people stagnate or even deteriorate," Li said. This, the professor warned, would fuel widespread social discontent.

The country has already seen a surge in labor disputes this year, according to China Labour Bulletin, a Hong Kong-based workers' right group. In the first eight months, the group recorded 1,194 strikes, almost matching last year's total of 1,257.

Beijing's pledge to extend $60 billion in financial assistance to African countries also sparked a backlash on social media earlier in September. Critics complained the money should be spent at home to improve livelihoods as the economy slows.

"China is not actually a rich country," said Willy Lam, a political commentator and adjunct professor at the Chinese University of Hong Kong.

Many on the bottom rungs of society feel their living standards have worsened due to high medical and housing costs, he said. "Obviously, the scale of social unrest will grow. [The authorities] can't solve the problem by just using the police apparatus to sustain stability." The government seems to sense the changing political winds. After a meeting of the Politburo, the Communist Party's top decision-making body, in July, a statement carried by state media pledged to stabilize the economy in the face of "new challenges." Employment was named the top priority out of six areas, along with finance, foreign trade, investment, foreign investment and "expectations."

Aside from the social risks, the yawning income gap will hinder Beijing's attempts to build a consumption-driven economy, leaving the country more vulnerable in the trade war due to its reliance on exports and investment.

Chen Xingdong, chief China economist at BNP Paribas, said many Chinese consumers cut casual spending when they sense economic uncertainty. "The problem with China is most people's income levels are low," he said. "They are not middle-class [in terms of purchasing power]."

The economist said the state could take steps to stop mass unemployment. "But the problem is whether the measures will be enough and whether they can be effective." For now, the lives of the Pinduoduo bargain hunters remain as precarious as ever.