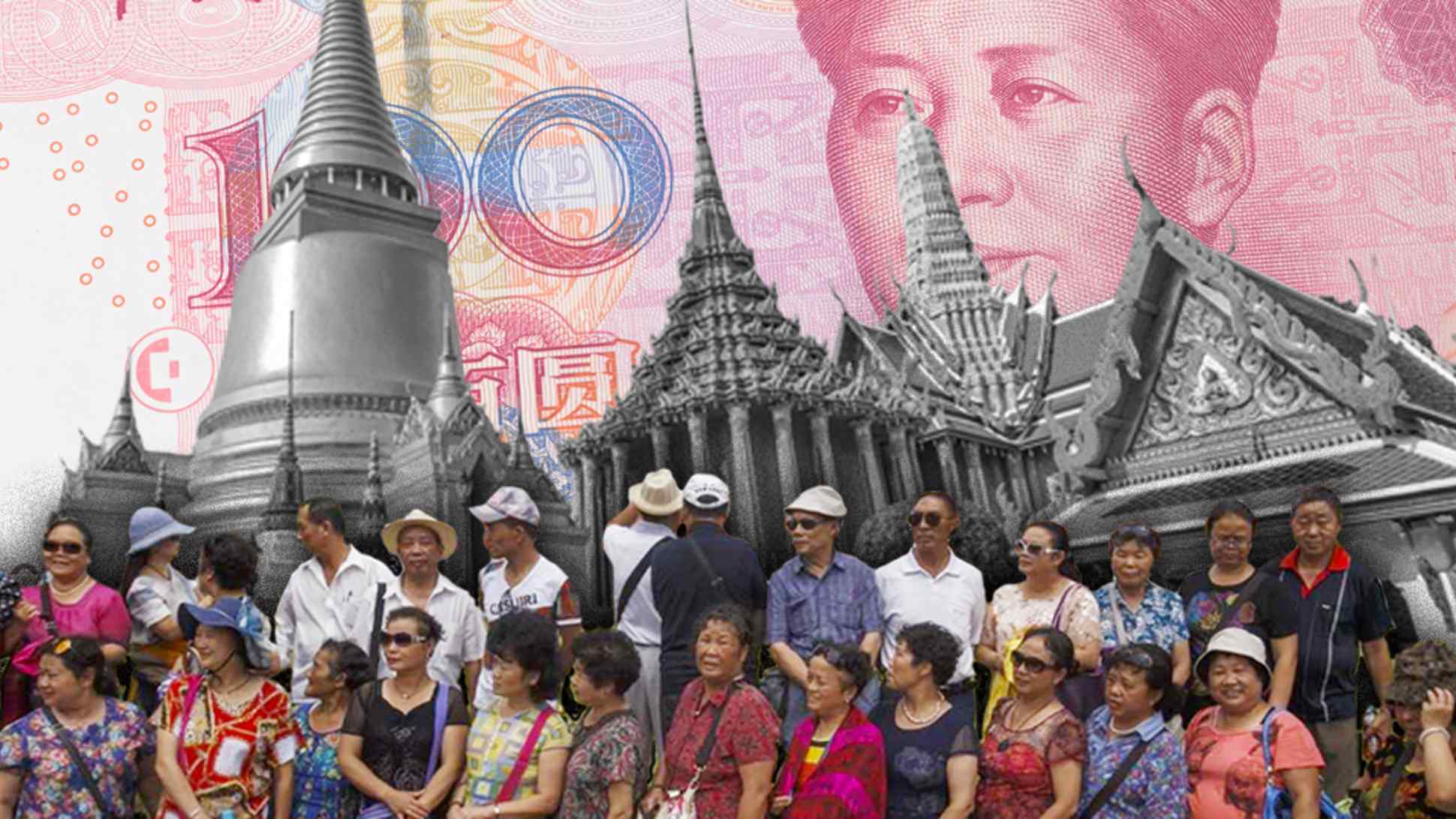 Brisk business, ecosystem damage and political pressure are part of the package

KOROR, Palau -- A decade ago, Palau's Rock Islands were a haven for travelers seeking solitude. The handful who made the trek would bond with nature in the lagoons and diving spots teeming with rare fish. Then Chinese tourists started visiting the limestone islets by the hundreds.

"The experience was diluted," said Ngiraibelas Tmetuchl, chairman of the Palau Visitors Authority. "You were paying a lot of money for exclusivity, but now you're experiencing it with a lot of people."

Across the Asia-Pacific region, countries are finding themselves in a similar predicament. Chinese visitors inject much-needed cash into local economies. Yet their sheer numbers raise environmental concerns, and at times, stir animosity among local residents. On top of that, Beijing seems to have realized it can use its travelers as political leverage, alongside its regionwide infrastructure drive.

In Palau's case, the flow of Chinese visitors peaked in 2015, with 88,476 descending on the remote island nation of 21,500. The influx raised fears of environmental degradation and prompted the government to halve the number of charter flights from Macau and Hong Kong, which accounted for most of the arrivals.

"Palau's small size, small population [and] very fragile environment do not go well with mass tourism," President Tommy Remengesau told the Nikkei Asian Review. "We want the tourists who would stay longer, who will spend more and who will respect the environment." Chinese tourists snorkel in Palau's Rock Islands. The remote nation saw arrivals from China peak at nearly 90,000 in 2015 before it sought to curb the traffic. (Photo by Jun Endo)

Chinese arrivals last year were down by a third, compared with the 2015 figure. This is what the government wanted, but the downturn has been painful all the same. Jackson Henry, president of the Palau-China Economic and Social Promotions Association, said the decline has left boats idle and hotel rooms vacant.

"Yes, you do help some people, but some people will get hurt," Henry said, arguing that letting "free enterprise take its course" is the way to find an equilibrium.

Key destinations include Thailand, Japan, South Korea, Malaysia, Indonesia and Vietnam. Most rely heavily on Chinese tourists, as a proportion of overall arrivals -- a point not lost on Beijing.

At the National People's Congress in March, China merged the Ministry of Culture and the China National Tourism Administration into the Ministry of Culture and Tourism. The new ministry underlines the growing importance of tourism for the government, said Wolfgang Georg Arlt, founder and director of the China Outbound Tourism Research Institute. The move, he said, "emphasized the importance of tourism as a soft power tool and as an opportunity to increase the cultural influence of China."

Wherever Chinese tourists go in Asia, that influence deepens.

"Sometimes I feel I am moving around a city in China, since so many signs and billboards are written in Chinese, and many shops only serve Chinese people," said Trung Bui, who lives in the northeastern Vietnamese city of Ha Long. The city sits on Ha Long Bay, a World Heritage site known for its limestone islands, rain forests and emerald waters. 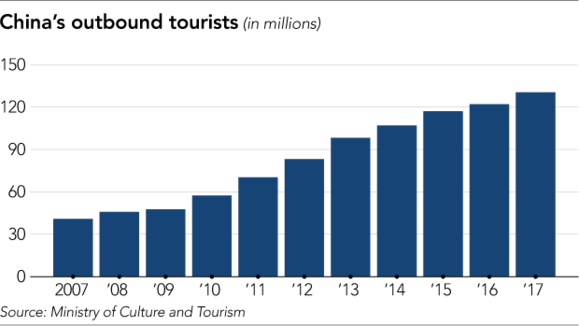 The province of Quang Ninh, where Ha Long Bay is situated, borders China and receives an average of 10,000 Chinese travelers daily. On the 600 boats licensed to visit the bay, 70% of the passengers in the first three months of 2017 were Chinese, according to the Quang Ninh Inland Waterway Port Authorities.

Over in Indonesia, Chinese tourists accounted for 14% of the country's 14 million visitors last year, after a 16-fold rise in a decade. More than two-thirds went to Bali.

I think it is becoming impossible to talk about investment, and tourism and economic strategy without China

Most restaurants in Bali now offer Chinese-language menus. Actual Chinese restaurants are sprouting across the island, often with large parking lots to accommodate tour buses. It is increasingly common to find shop clerks who speak Mandarin.

While business is booming, some locals take issue with the tourists' manners.

"I don't know if rubbish on the island has increased because of the Chinese, but one thing is certain: Wherever they go, there is litter on the ground," said a senior official from the Bali government's tourism office, who asked not to be named. "That does not stop no matter how hard we tell them."

As in Palau, some resort destinations have decided the threat to the environment outweighs the economic benefits. Bali officials lament the growing volumes of trash on the island's beaches.   © Reuters

In Thailand, the Krabi provincial tourism authority will close Maya Bay for four months starting in June, to allow the area's damaged ecosystem to recover. Daily visitors to Maya Bay, made famous by Leonardo DiCaprio's movie "The Beach," have surged to nearly 5,000 -- a jump local officials attribute mainly to Chinese tourists. There is talk of capping daily access to 2,000 visitors per day.

The Philippines' Boracay Island has just been closed for six months for environmental rehabilitation. President Rodrigo Duterte described the waters there as a "cesspool," accusing some businesses of dumping raw sewage into the sea. He also stopped the construction of a $500 million integrated resort on a 23-hectare property by Macau-based Galaxy Entertainment Group and its Filipino partner, Leisure and Resorts World.

In 2017, Chinese visitors to the island increased 37% to 375,284, dislodging South Korea as the top country of origin for the first time. China accounted for 38% of all foreign tourist arrivals on the island. Chinese visitors frolic in Boracay, in the Philippines, in early April. The government has since made the island off-limits to tourists for six months.   © Reuters

But ecosystems are not the only worry. Some governments are wary of China wielding its soft power in a not-so-soft manner. South Korea learned this lesson firsthand.

Overall tourist arrivals to South Korea dropped 22.7% on the year in 2017, to 13.3 million. Visitors from China, who account for nearly a third of the total, plunged 48%, dealing a severe blow to the hospitality sector.

Vietnam had a similar experience in 2014, when relations deteriorated after China placed an oil rig in disputed waters of the South China Sea. That year, the number of Chinese tourists to Vietnam dropped 8%. Thailand welcomed 9.8 million visitors from China last year, out of a total of 35.38 million.

All of this is prompting Asian governments to rethink their tourism strategies and cultivate alternative markets. South Korean President Moon Jae-in, for instance, is pushing a "new southern policy" focused on attracting travelers from Southeast Asia while improving economic and political cooperation with the region.

Thailand, meanwhile, has mustered the will to crack down on "zero baht" tours. The term describes a practice whereby operators offer cheap tours but force customers to visit selected souvenir shops and restaurants. Most of the profits flow to Chinese travel operators and Chinese shop owners.

Itthirit Kinglek, president of the Tourism Council of Thailand, said 80% of the problem has been solved. "It makes us think about the quality of the tourists, not only about the number of tourists." "Chinese tourists help our business," said Ayu, who works at a cafe in Bali's Discovery Shopping Mall, a popular stop for Chinese visitors. "Because they tend to come in groups, they fill up the time slots when we previously did not have much business."

Still, the economic value of courting Chinese tourists is hard to ignore. International tourism receipts accounted for around 12% of Thailand's economy last year. A total of 35.38 million visitors came, 9.8 million of whom were Chinese.

"I think it is becoming impossible to talk about investment, and tourism and economic strategy without China," said Tom Lembong, chairman of Indonesia's Investment Coordinating Board, at an event in Jakarta in early April.

A Nielsen report on outbound Chinese tourism and consumption trends showed that the average traveler spends more than $3,000. Among Asian destinations, Chinese visitors spent an average of $3,007 in South Korea, followed by $2,971 in Singapore and $2,952 in Japan. 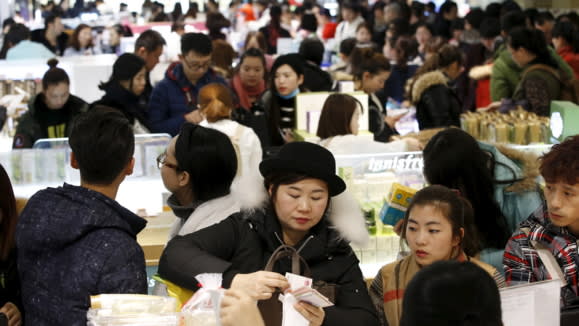 The average Chinese traveler spends over $3,000 per trip, including shopping at duty free stores like this Lotte location in central Seoul.   © Reuters

"Destinations have to develop their brands and have to develop new upmarket offers for special-interest groups to attract not only the lower end of the market," he said. Thailand has found that setting a minimum price for package tours is effective.

Palau, despite the continued decline in overall numbers, can take some solace in 9% growth in revenue per arrival.

President Remengesau, in a state of the nation address in April, emphasized the need to promote the right kind of tourism. "In our reset," he said, "we can once again return to our vision of a high-value tourism destination with a maximum return on investment and a diverse set of tourism guests."

Nikkei staff writers Shotaro Tani in Bali, Apornrath Phoonphongphiphat in Bangkok and Kim Jaewon in Seoul contributed to this report.