Cities after COVID: How Manila and others can 'build back better'

SINGAPORE -- In the pre-pandemic world, the most stressful parts of Janica Solis' day often had little to do with her job at an education tech startup in the Philippines. Rather, it was the journey to and from work that really wore her down.

Her morning commute through Metro Manila comprised a long jeepney ride that made the 28-year-old feel "hot and cramped like a sardine." Traveling home involved a half-hour walk to the train station, followed by a bus and two auto-rickshaw rides. Solis would spend an hour and a half to two hours traveling each way -- an absurd amount of time to traverse a mere 7 km.

Manila is one of the world's most congested cities, where commuters spend an average of 66 minutes stuck in traffic every day. So when the Philippine government, spurred on partly by new safe distancing measures, pledged an overhaul of its capital's transport system in May, Solis and many others cheered. She is cautiously optimistic, saying "it's good to hear" of plans for more pedestrian-friendly streets, bicycle lanes and shuttle buses.

If successful, the initiative would be one of COVID-19's silver linings.

The pandemic has ravaged economies and lives across the globe. But in the wake of the coronavirus, Manila and other cities see a chance for a do-over -- a chance to "build back better" and create communities that are cleaner, greener, healthier, more inclusive, and more resilient to future disasters.

"This is an opportunity to hit the reset button on our thinking," said Guillermo Luz, chairman of the nonprofit Liveable Cities Philippines. "We know that we can't only think of health but have to address many things. How do we plan our cities, our activities, and our infrastructure?" 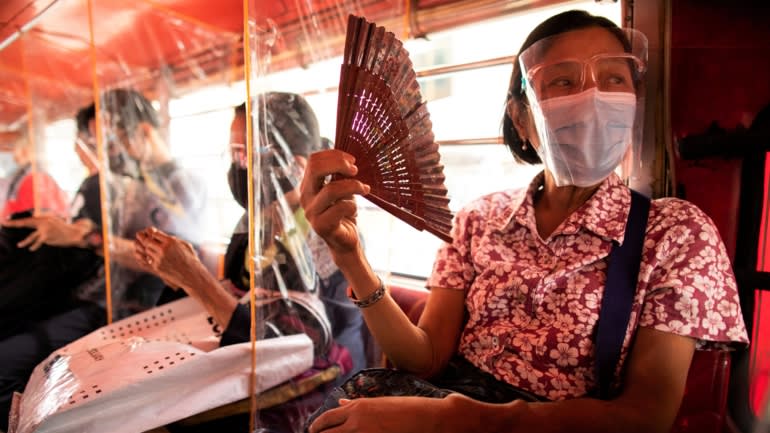 Those three words -- build back better -- are cropping up everywhere, from Singapore's election earlier this year to U.S. President-elect Joe Biden's transition website. But much of the emphasis is on improving cities, and it is easy to see why. The United Nations estimates that 55% of the world's population lives in urban areas, a figure that will jump to 68% by 2050.

Developing Asia is expected to be an urbanization hot spot, just as it has been in the past 50 years: The region's urban population has grown at a rate of 3.4% per annum over that period, versus 2.6% in the rest of the developing world, according to the Asian Development Bank.

Any city wishing to thrive, sustainably, in the future will need to plan carefully and address weaknesses the pandemic has laid bare.

Improving connectivity and reducing congestion, as Manila has pledged to do, is a good start, Luz told Nikkei Asia. Because public transport systems in the region are often fragmented, unreliable and inefficient, "many people prefer to drive their own cars or use mass transit alternatives like private hire vehicles," he said. The result: traffic-clogged streets. COVID-19 has only exacerbated the situation, said Norliza Hashim, founder of Urbanice Malaysia, a think tank that studies solutions for urbanization. "We're seeing people go back to their cars because they're afraid to use public transport," she said.

Although some cities have implemented health precautions -- such as partitioning seats with plastic sheets in jeepneys -- many citizens remain fearful. "You don't really know if the driver is cleaning the plastic and how often they disinfect it," Solis said. She has only hopped in a jeepney three times since the pandemic began, preferring to hail rides via Grab even though they cost about 10 times more.

She has, however, noticed a heartening trend since COVID hit: more people cycling. The same phenomenon has been observed elsewhere in Asia, including Singapore and Indian cities. This offers a glimmer of what could be, if there were more bike lanes and sidewalks to ease concerns about the dangers of riding or walking close to traffic. The result could be a win-win situation of healthier populations as well as reduced congestion and carbon emissions. An oceanfront slum in Mumbai: Millions in Asia's metropolises have little choice but to reside in informal settlements on the fringes of society.   © Reuters

Another failing of cities that COVID-19 has thrown into stark relief is economic inequality, especially when it comes to housing. Inhabitants living in overcrowded apartments and slums with limited access to water, sanitation and health services are among the hardest hit by the virus.

Millions in metropolises have little choice but to reside in informal, and often illegal, settlements on the fringes of society. Housing is simply too expensive. In one study conducted by the ADB across 211 cities in the Asia-Pacific region, housing was found to be "severely unaffordable" in 93% of the cities.

COVID-19 has stirred a sense of urgency and recognition that public health is intrinsically tied to public housing, and that building back better must involve a more equitable distribution of social services and the development of proper dwellings for the underserved and marginalized masses.

"We really need to be thinking about how we can come up with sustainable forms of social housing," said Jordana Ramalho, a lecturer in urban development at University College London. "A house is such a fundamental space. ... People's ability to recover and bounce back is really closely connected with their housing security."

It is not only the quantity but also the quality of housing that matters.

Building designs will need to be revised post-COVID, said design ethicist Jeffrey Chan from the Singapore University of Technology and Design. Most architects usually consider elements such as aesthetics and how to conserve energy, he said, but more will likely factor in building sanitation and health "now that there is greater awareness of the need to reduce viral agents spreading in the air." A tree stands before high rises in Singapore: The pandemic has reminded urban planners of the importance of greenery.   © Reuters

Before the pandemic, many urban dwellers were already spending large portions of their days in enclosed buildings or traveling in "hermetically sealed and mechanically ventilated environments between buildings," Chan said. In the future, he thinks architects will design "healthier buildings" that boast greater ventilation, fewer touch surfaces and safer, contamination-resistant coatings.

The areas around buildings are also due for a rethink. "People now recognize the importance of green spaces to a city," said Puthearath Chan, who works at the Cambodian government's Department of Green Economy.

"Before, people would usually go to shopping malls to relax, de-stress, and chit chat. But when COVID hit, more people started to get interested in the natural areas, like going to climb Knong Psar mountain," he said, referring to the popular nature reserve in western Cambodia.

Similar scenes of urbanites flocking to open spaces as a form of physical and mental escape from COVID restrictions have been reported in Singapore, Hong Kong, Tokyo and other cities. "Based on this change, city planners have started thinking how to include more green spaces and urban forests," said Puthearath Chan. 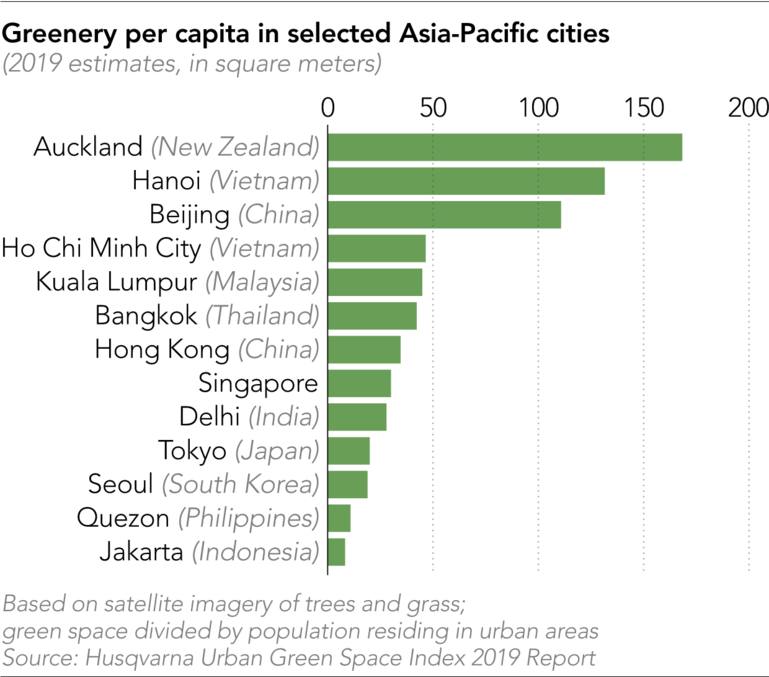 Some city dwellers have also taken to urban farming as COVID-19 has disrupted supply chains and heightened concerns over food security. Governments in the region have been quick to encourage the practice, mailing out seeds for people to plant, opening more allotments and supporting urban farms.

Still, having a vision for better cities is one thing. Implementing it is another. There is always a tussle between developing the economy and protecting the environment. "I think one of the biggest challenges, particularly in the megacities of Southeast Asia and East Asia, is how to balance development, public health and sustainability," said Chan from SUTD.

Clean and green development is possible, but it usually comes at a higher cost. And COVID-19 is only straining resources and budgets further. There are "very difficult times," acknowledged Urbanice Malaysia's Hashim. "We might have setbacks in some areas," she said, noting there had been more money available in the past. Another challenge her organization faces in promoting sustainable cities in Malaysia -- where over 75% of the population resides in urban areas -- is a dearth of "evidence-based local data" on everything from demographics to emergency logistics. Granular information enables "people to be more conscious of what they're doing," she said, and helps those in charge to make more accurate decisions by "knowing exactly where to allocate funds and implement programs."

Luz finds himself facing the same problem in the Philippines. So he and his team have spent the past two years compiling statistics -- on student and working populations, number of hospitals, first responder rates, and so on -- of various cities and collating them in a single place: an online dashboard that mayors and citizens can access for free.

"One thing with data is that once you get it, you tend to ask a lot more 'What if?' questions," Luz said. "When you can measure what's going on, you can manage it better." Children jump into the polluted waters of Manila Bay to cool off. Asia's megacities face the challenge of balancing development, public health and sustainability.   © Reuters

To build back better, Luz and other changemakers are also pushing for greater collaboration between governments and communities, versus the old top-down approach adopted in many parts of Asia.

It is "very aspirational," conceded UCL's Ramalho, but we should try "to move away from consultation toward co-production." At the same time, she said it was important to work across sectoral lines and think "creatively about how we can approach resilience and sustainability in urban development."

Many experts are hopeful.

"Moving forward, some will go back to what it was before, but there's going to be some behavior change too," Luz said. "I think people will learn to do things in a different way."