TOKYO -- It has been a good year for Takeshi Ishisaka, a 69-year-old rice farmer in Japan's Toyama Prefecture, northwest of the capital.

Ishisaka just finished harvesting his crop in mid-September, and even he was surprised by what his paddies produced. "The quality is better than the rice I've cultivated before," he said, explaining that 100% was classified as first class -- superior in terms of color, appearance and size.

His good year was a product of 15 years of effort by the prefecture, which sought to develop a new breed of rice capable of withstanding high temperatures and other extreme weather.

From Japan to Singapore, Thailand the Philippines and beyond, governments are increasingly spooked by the prospect of climate change undermining their food security. The warnings are stark, the competition for resources is intense, and technological innovation may be Asia's best chance to feed itself.

Toyama recognized the threat back in 2002, when it had its worst rice harvest ever. Only half the crop was rated first class. Excessive heat was deemed the culprit.

"We needed to take measures," recalled Yoichiro Kojima at Toyama's Agricultural Research Institute. The next year, it started working on a new variety of rice that would be able to survive hotter weather and heavy rains. 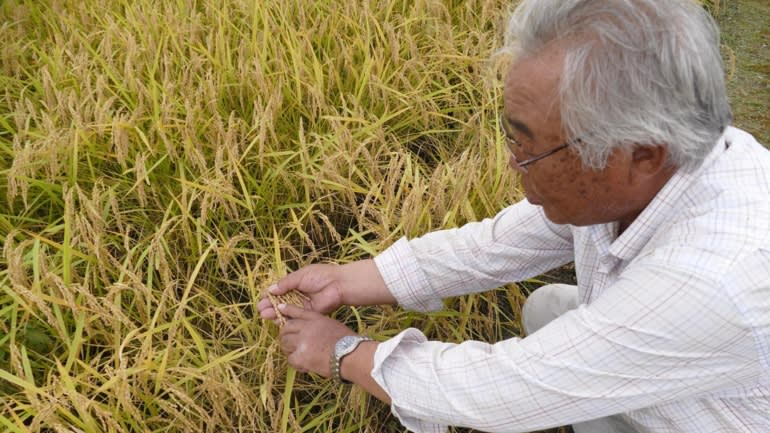 The result is a breed called Fufufu -- meaning "richness." The rice was developed by crossbreeding five rice varieties that have various desirable characteristics, such as heat resistance, shorter plant length and resistance to diseases, particularly rice blast. Shorter plants are better because they are unlikely to be toppled by heavy rains. Of the five varieties, the key was Indica, which has high heat resistance. After 10 years of study, researchers finally determined which chromosome is responsible for that trait. This year is the first that the rice is available nationwide.

Ishisaka started growing Fufufu in 2018 and this year doubled the cultivation area to 10 hectares. Previously, he had only grown Koshihikari -- one of Japan's most famous varieties, which accounts for 30% of all rice grown in the country.

"Summer is getting hotter and hotter and conventional rice varieties are less suited to the weather," Ishisaka said, explaining that more Koshihikari ends up written off. "It's been a matter of life and death for farmers as our revenue is subject to the yield." According to the Japan Meteorological Agency, the average number of days in which the high temperature exceeded 35 C in 13 areas of Japan reached 7.1 in 2018,  up from 3.0 in 2000 and 1.8 in 1990. Japanese farmers are hardly the only ones feeling the heat. A recent report by the Intergovernmental Panel on Climate Change warned that cereal prices could surge up to 23% by 2050 due to climate change. This would hurt the poor, and the risk is especially acute in parts of Asia where growing populations need ever more food.

On top of more expensive cereals, the IPCC's report highlighted a number of other side effects of warming -- reduced yields, disruptions to food storage and transport networks, and declines in nutritional quality.

Under the Paris Agreement, 196 countries pledged to take steps to limit the global average temperature increase this century to well below 2 C. But Akio Shibata, head of Japan's Natural Resource Research Institute, argues that global warming is "accelerating" and that temperatures will "rise more quickly than expected."

In September, the World Meteorological Organization said the global average temperature is up by 1.1 C from the preindustrial period, and by 0.2 C from as recently as 2011-2015. The Breakthrough-National Center for Climate Restoration, an Australian think tank, projected in a separate report that warming will reach 1.6 C by 2030.

The danger is not just theoretical: Across Asia, countries are grappling with extreme weather conditions as we speak. And the World Food Program says the number of people suffering from hunger increased for the third consecutive year in 2018, to 821 million. "A major factor behind the trend is global warming," Shibata said. In Thailand, the world’s No. 2 rice exporter, a long drought this year hit the kingdom’s north and northeastern rice-growing regions, closely followed by torrential rains and massive flooding. A farmer in the province of Maha Sarakham said in early August that he was unable to plant his rice before the seedlings died because his paddies were so dry. Farmers who managed to do their planting saw their fields inundated by the floodwaters at the end of August.

The flooding is believed to have caused 20 billion to 25 billion baht ($657 million to $821 million) worth of economic damage and slashed production by 100,000 tons, equivalent to 8% of Thailand’s rice exports. Countermeasures are almost as expensive: The National Water Resource Commission introduced a 13 billion baht plan in March to combat droughts and flooding.

India, the world’s largest rice exporter, also suffered from drought this year. Australia, a major wheat exporter, imported the grain for the first time in 12 years due to water shortages.

Even if the Paris Agreement works, the world is likely to face food security challenges. One study by Japan's National Agriculture and Food Research Organization found that even if the global mean temperature rises less than 1.8 degrees from preindustrial levels this century, warming will still suppress yields of maize and soybeans.

Technology, though, provides glimmers of hope. Japanese agritech company Mebiol sells a hydrogel film, on which plants can grow without water or soil. (Photo by Rurika Imahashi)

A Japanese agritech company called Mebiol has been fielding calls from China, India, Thailand and Brazil about its workaround for soil contamination and insufficient water. The key is a "hydrogel" film, on which plants can grow.

The film reduces water usage by 90%, compared with conventional hydroponics. "No matter what the weather is, this film can supply stable food," said Yuichi Mori, Mebiol's founder. The company has secured patents in 130 countries, and 3,500 tons of tomatoes are already grown with the film annually. Revenue reached 350 million yen ($3.27 million) in fiscal 2018.

"The number of overseas inquiries has tripled compared with two years ago," Mori said.

Asian governments hope to harness new technologies as they compete -- and sometimes collaborate -- to ensure food security for their people.

Singapore has lined up a series of food projects, including an 18-hectare Agri-Food Innovation Park that will be used for high-tech farming along with research and development. Even insect farms are on the menu.

Sustenir Agriculture, a Singaporean vertical farming company, has successfully cultivated strawberry plants in a laboratory and is selling the product through online supermarket RedMart.

Singapore, despite its wealth, is in a precarious position because it imports 90% of its food -- imports that were worth around 11.3 billion Singaporean dollars ($8.18 billion) in 2018. This makes the city-state vulnerable if and when other countries restrict exports to safeguard their own supplies.

Malaysia raised alarm over precisely this in December, when it announced it was looking at limiting shipments of seafood and eggs.

Singapore has been aware of this risk for years. It has actively sought to diversify its procurement, expanding its import sources to 180 countries from 140 in 2004, Environment and Water Resources Minister Masagos Zulkifli told parliament earlier this year. 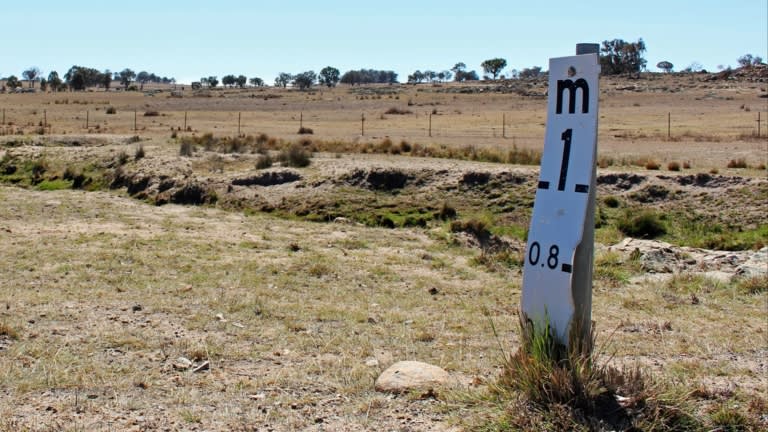 Australia is suffering one of its worst droughts on record. Here, a water level indicator stands next to a nearly empty creek on Sept. 24.   © Reuters

"We take for granted apples from Poland, bananas from Ecuador and Mandarin oranges from China in our supermarkets," Zulkifli said, stressing that all these foods are "the fruits of a deliberate strategy."

Ultimately, however, the city-state wants to become more self-sufficient. The current goal is to triple homegrown food production by 2030.

Over in the Philippines, the government is gathering extensive data and offering farmers advice on how to navigate an unpredictable climate.

The Department of Agriculture's office in charge of climate change launched a program in 2013 to evaluate the sensitivity of farming communities to extreme weather and help them adjust. The program is called the Adaptation and Mitigation Initiative in Agriculture, and the communities involved are known as AMIA Villages.

Comprehensive local data will form the "basis on how the communities will specifically address the climate vulnerabilities they are experiencing, and to improve the implementation of climate-related strategies," explained Director U-Nichols Manalo, head of the climate change office.

Cecilia Quipayo, leader of the farming community in the village of Cagbunga, signed up for the AMIA program in August 2017. Since then, she said, her organization has received regular updates from the regional agriculture office. "They let us know when it will rain, when it is best to plant, when we should dry the grains, among others," Quipayo said. Local farmers were also introduced to alternatives, like growing vegetables and raising ducks, to diversify their incomes and food supplies.

A 2017 study only added to the urgency. With every temperature increase of 1 C, the research found, the Philippines' rice yield will decline by 10%. To avoid that, the local authorities in Davao -- President Rodrigo Duterte's home region -- have urged farmers to plant sturdier, next-generation varieties that can stand up to heat, droughts, floods, diseases and salinity, local media reported.

But as governments and countries turn to high-tech climate solutions, some experts say they should watch out for ripple effects. Others stress the need for not just country-specific measures but also more international cooperation. 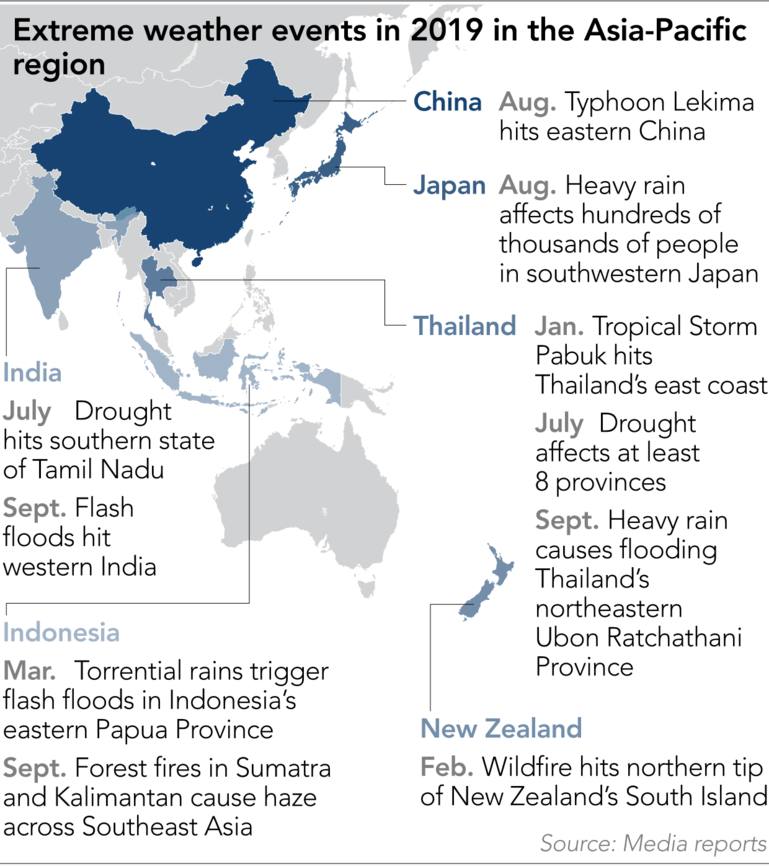 "Even if a certain technology can address one issue, it could sometimes have a negative effect on other issues," said Nobuko Saigusa, director of Japan's National Institute for Environmental Studies and a contributor to the IPCC report. She advises combining "several measures, which have a positive effect on multiple issues" in order to "minimize the trade-offs and maximize the synergy."

A step toward more collaboration came in August, when the Asia-Pacific Economic Cooperation forum released a joint statement on food security, in which agriculture ministers acknowledged the growing impact of climate change on production. Masayuki Yokozawa, a professor at Tokyo's Waseda University, said it was "a good attempt to strengthen regional cooperation to suppress the variability of climate and agriculture production."

The risks are there for all to see -- and they extend far beyond malnutrition.

Back in 2008, when wheat prices surged due to dry weather and a resource boom, the global population suffering from hunger exceeded 1 billion in 2009. This pressure is considered one factor that sparked the Arab Spring protests in the Middle East.

A failure to take sufficient countermeasures now, the Natural Resource Research Institute's Shibata warned, could lead to more hunger as well as "conflict, especially in the vulnerable countries of Asia."