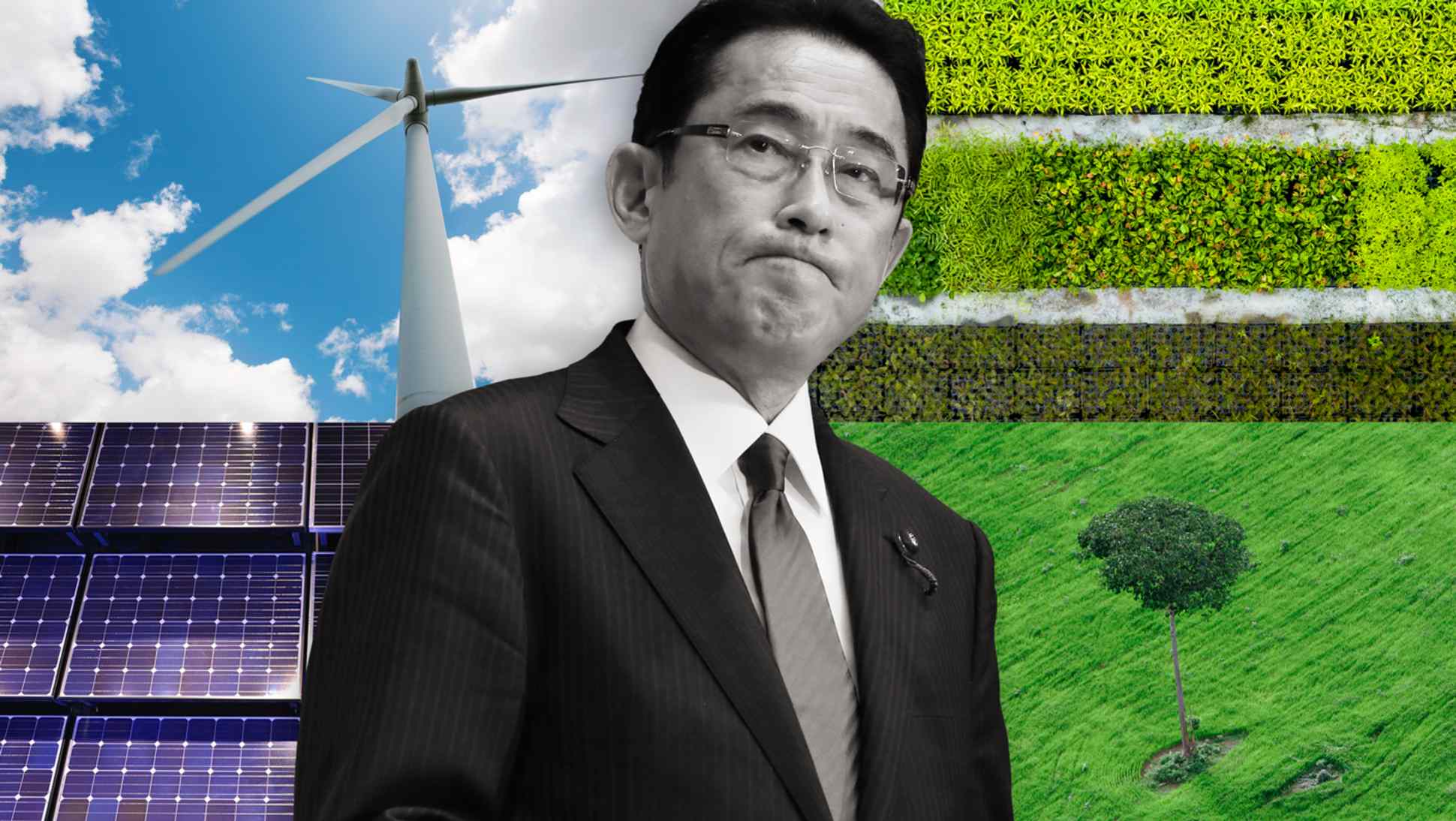 TOKYO -- Eneos, Japan's largest oil company, has a plan to withstand the shift away from fossil fuels. It includes doing laundry.

The company runs 13,000 gas stations, more than 40% of the country's total. At a growing number of them, motorists stopping for a fill-up can also drop off their clothes for washing. Some stations pick up and return laundry for customers.

"We have a very strong sense of crisis," Eneos spokesperson Shiori Tatsuta told Nikkei Asia. "We believe we need to actively go into new areas of business. If we want to survive, we need to be recognized as a valuable company."

Shareholder pressure, and three decades of declining Japanese oil demand, have prodded Eneos to diversify. It is also looking to use its stations for parcel deliveries, electric vehicle charging and rural health care services. Last week brought news it was preparing to spend $1.7 billion on a renewables startup.

Across Japan Inc., many businesses are only starting to come to terms with the difficult adjustments ahead as the government aims for carbon neutrality by 2050. Some are not happy about what they feel was a hasty commitment. And experts say overcoming resistance to reach the net-zero goal will require strong, steady governmental leadership.

The prime minister now tasked with steering Japan toward a cleaner future, however, is not the one who set the goal. Fumio Kishida inherited the job from his predecessor, Yoshihide Suga, and now companies and climate advocates alike are wondering how committed the new prime minister is.

Japan has much to do on the emissions front. From 1990 to 2019, the country's carbon output dropped just 5% to 1.1 billion tons, according to data from the Environment Ministry. In the same period, emissions fell 33% in Germany and 38% in the U.K., according to Our World in Data. 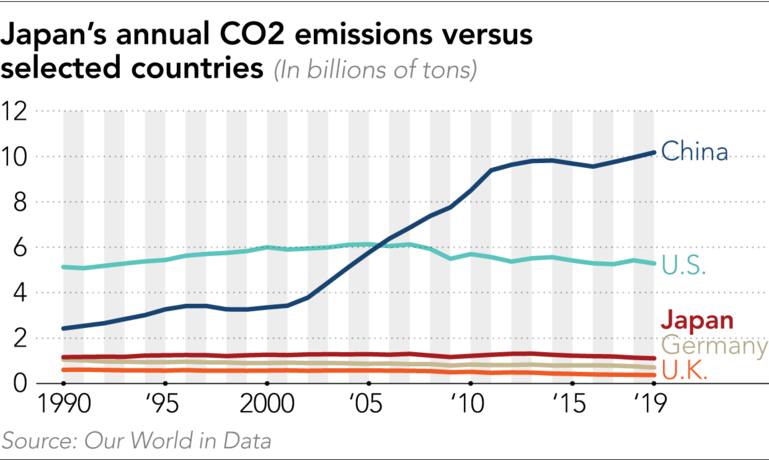 Suga appeared to recognize this. The former prime minister made emissions reduction a policy centerpiece, committing the country to a 46% cut by 2030 and carbon neutrality by 2050. This was a dramatic escalation from the previous policy that then Prime Minister Shinzo Abe's government set in 2019, which said only that Japan would strive for net-zero "as early as possible in the second half of this century."

But Suga resigned in September before spelling out exactly how Japan would get to neutrality. In July, the Ministry of Economy, Trade and Industry released a draft Basic Energy Plan that called for doubling the share of renewables in the country's mix of power sources, to 36%-38% of the total energy supply. Nuclear would more than triple to 20%-22%, while coal would drop to 19% from 32%. Yet the plan was light on specific steps, instead listing technologies that should be explored -- including hydrogen fuel, ammonia combustion and micro nuclear reactors.

"METI's basic plan has ambitious goals, but it reads like a patchwork of ideas rather than a consistent plan with strong budget commitments," said Robert Feldman, an economist at Morgan Stanley MUFG.

Meanwhile, the Suga government's net-zero promise prompted howls of protest for being "top-down," "damaging to industry" and likely to "hollow out the economy."

One of the highest-profile critics has been Akio Toyoda, president of Toyota Motor and chairman of the Japan Automobile Manufacturers Association. He argued the government's climate policy was decided without consideration of the realities facing Japanese companies, particularly carmakers. Although he welcomed the ideal of carbon neutrality, he warned that forcing manufacturers to use expensive renewables and potentially banning cars with internal combustion engines -- including hybrids -- in favor of pure EVs would "result in much of the 5.5 million workers in the Japanese auto industry losing their jobs."

About 40% of new vehicle sales in Japan are "electrified," but they are almost entirely gasoline-electric hybrid cars, such as the Toyota Prius.

Kishida, who will lead the ruling Liberal Democratic Party into a general election on Oct. 31 and has said he will only attend the United Nations' upcoming COP26 climate conference remotely, at times sounds more like Toyoda than a net-zero evangelist.

In his first policy speech to parliament last week, Kishida mentioned the 2050 goal and spoke of devising a clean energy strategy to "make global warming measures contribute to growth." He did not talk about nearer-term goals like the 2030 carbon cut.

He shared more of his climate views in a debate on Sept. 24, during the LDP's presidential race to replace Suga. "It goes without saying that renewable energy is important, but our country is in the midst of a digitization drive, which means that electricity demand is going to increase sharply," Kishida said. "When you think about this, you realize that supply stability and affordability are just as important as the amount of emissions. That means that we need to have a variety of energy sources, including nuclear and hydrogen as well as renewables."

Kishida hails from Hiroshima, home to Mazda Motor and other manufacturers. He argued that while businesses should make efforts, individuals should do their part by using LED lights to cut energy consumption and reduce water use by "using the bathtub instead of the shower" -- comments that drew criticism for failing to reflect the gravity of the climate crisis.

Kishida agreed that "energy policy has to be based around the goal of carbon neutrality by 2050" but insisted that "it also needs to consider what effects it will have on local economies and employment."

"We have to bear in mind these real-life issues," he said. "People are worried about how a policy change would affect their lives, jobs and community."

Climate watchers are ready to answer this argument. They suggest that without retraining, Japanese manufacturing jobs would inevitably be lost as the rest of the world adopts new energy technologies and, for example, moves beyond hybrid cars. Morgan Stanley MUFG's Feldman said: "Jobs cannot be protected by slowing technology adoption. Other countries are already moving fast."

Shinjiro Koizumi, a politician who has positioned himself as a proponent of climate action, warned in his last news conference as environment minister on Oct. 1 that reversing the policy of prioritizing renewables would mark "a retreat" for Japan. 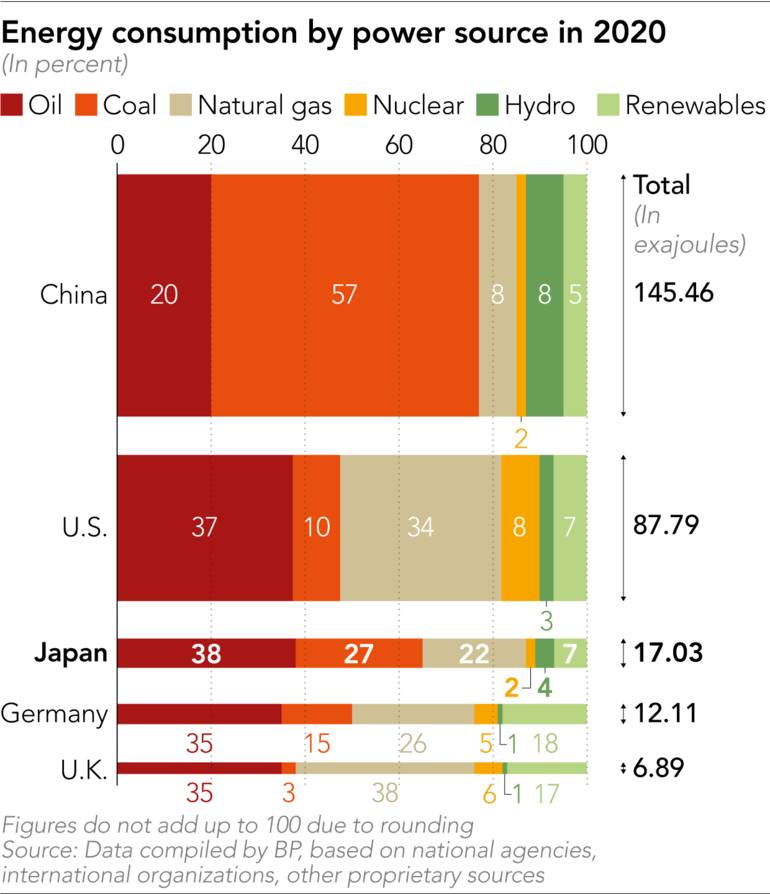 Others insist it is up to the government to make the green transition less daunting.

"Without government support, everyone becomes opposed to change," said Kimiko Hirata, a founding member of Kiko Network -- a climate-focused nongovernmental organization and prominent anti-coal group. "They would say, 'We don't want to lose our jobs.' And, 'We have to feed our families.'"

Hirata's group has learned to use limited resources -- a full-time staff of 16 and an annual budget of $1 million -- to spur progress. One way is shareholder activism. In a landmark example, Kiko Network bought shares in Mizuho Financial Group, one of Japan's largest banks, and submitted a resolution demanding a change to the articles of incorporation so that investments would align with global emissions reduction goals. The resolution, the first of its kind in Japan, gained 34.5% support and put significant pressure on Mizuho and other banks.

Hirata lamented a lack of "charismatic" figures championing the climate cause in Japan -- people like Mark Carney, the former Goldman Sachs banker and Bank of England chief who has warned climate change will cause deaths on the level of COVID-19 every year, or Michael Bloomberg, the American media mogul. Ultimately, she said, "I want to see Japan grab more of a leadership role."

"Japan doesn't have to be a follower of the West," she added. She thinks the country should be capable of setting new rules to encourage the adoption of clean technology, but "all too often Japanese proposals are for weakening emissions standards."

The result is a state of affairs in which China, the world's largest carbon emitter, might appear more proactive on climate than Japan. A solar power plant in China: The country is the world's largest carbon dioxide emitter, but it has turned itself into a renewables powerhouse as well.   © Reuters

Emissions from China quadrupled from 1990 to 2019, to over 10 billion tons, accounting for more than half of the global increase. But in the last decade or so China has also become a renewable energy powerhouse, emerging as the world's biggest generator of wind and solar power. The country accounts for 70% of solar panel production as well, and it is the biggest national EV market: Electric cars accounted for 12% of China's new car sales in the January-June period.

One effort to clean up Japanese energy generation is being led by JERA, a utility responsible for 30% of the nation's electricity supply. At a power plant in the central city of Hekinan, it is piloting a project to replace 20% of coal fuel with carbon-free ammonia -- a world first, and one of the technologies mentioned in the Basic Energy Plan. The problem is that while burning ammonia may not produce carbon, making ammonia generates lots of it. Ultimately, ammonia production needs to be powered by green electricity, too, but existing renewable capacity would not be enough.

Such challenges can make it seem like Japan is taking one step forward and two steps back. But experts note the country has encountered, and cleared, similar challenges before.

"In energy transition, Japan was successful in the 1950s and '60s by shifting from expensive domestic coal to cheap foreign oil, and gained global competitiveness," Feldman observed. That required coal miners to acquire skills for new jobs. 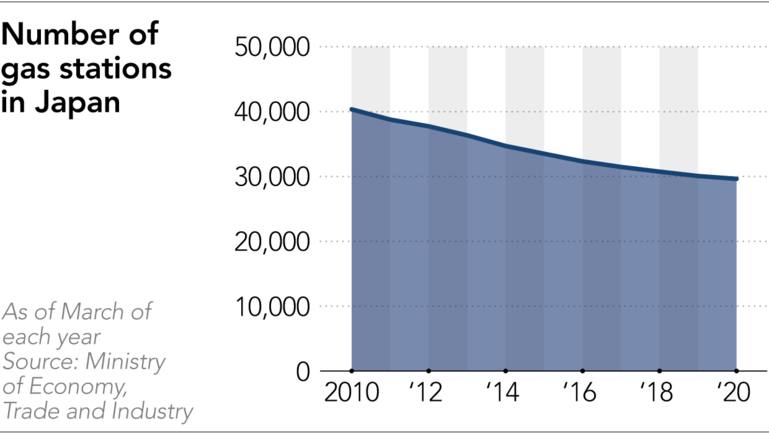 Oil companies like Eneos have faced a similar shift in more recent decades.

Many refineries, key employers for local economies, were converted into chemical plants to produce something other than fuel. Now, Eneos' Tatsuta said that "workers at refinery plants have various qualifications, such as certificates for handling hazardous materials, and can be useful in other areas of business."

Feldman called Japan's "slow start" in the renewables transition "a burden on Japanese global competitiveness" but expressed optimism that the country can catch up.

Shareholders and harsh market realities can provide a nudge. But will the government also do what it takes?

"Global investors," Feldman said, "are concerned about whether the new Kishida government will be as aggressive on energy transition as the Suga government was."