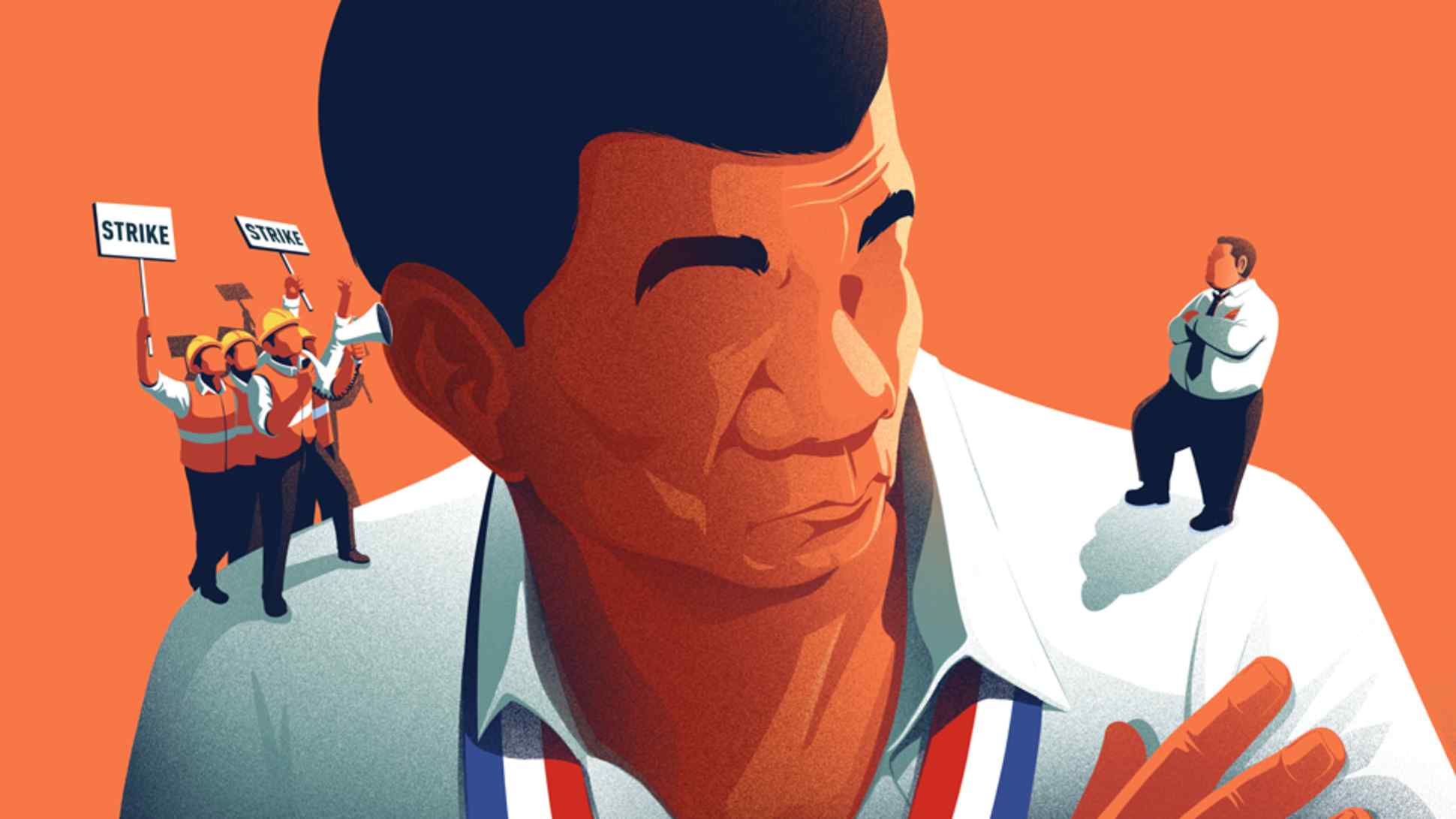 MANILA -- Outside a sardine cannery in Manila's port district, a shanty serves as a makeshift headquarters for disgruntled employees who launched a strike in July.

"They have been treating us unfairly all these years!" Sonia Gabato, a 54-year-old worker at the cannery, said on Oct. 6. She and a colleague had just completed a handwritten testimony detailing allegations against their employer, which will be submitted to the Department of Labor and Employment.

Across town, in the capital's Bonifacio Global City business district, maintenance workers declared a hunger strike on Oct. 5 outside the posh condominium where they had toiled for years. "We will fight until the end," said 58-year-old Abdulatip Tambungalan.

Under President Rodrigo Duterte, who championed labor rights during his campaign, such protests are more frequent than they used to be. The strikes and looming legislation meant to address worker frustrations risk clouding the outlook for some businesses and are making international investors think twice.

In 2016, the year Duterte took office, the number of strikes shot up to 15. Not only was that three times the previous year's count, it exceeded the total number of stoppages since 2011. Workers staged nine strikes in 2017, but the number has surpassed double digits again this year as workers emboldened by the president's rhetoric grow impatient. Maintenance workers at a luxury condominium in Manila's Bonifacio Global City business district have been on a hunger strike. (Photo by Kimberly Dela Cruz)

"[Workers] feel more protected under this administration and they have a wider avenue to stage a strike," Benjo Benavidez, the labor department's acting undersecretary, told the Nikkei Asian Review.

Duterte, who once described himself as a "socialist," has unleashed a wave of activism with his passionate promises to end contractual or temporary work, which critics say deprives millions of people of job security.

"I'm telling this to you. ... You choose: Stop contractualization or I kill you," Duterte told businesses in early August 2016, in a televised speech a month after he was sworn in.

Aiming to end a decadeslong communist insurgency, Duterte appointed Communist Party nominees to key government posts -- including in the labor department. Radical worker groups, meanwhile, galvanized unions. The strikes at the sardine cannery and condominium were instigated by groups associated with the political left, according to organizers. This shanty outside a sardine cannery in Manila's port district serves as a headquarters for striking workers. (Photo by Kimberly Dela Cruz)

Things were different under Duterte's predecessor, Benigno Aquino, who showed little tolerance for labor unrest. In 2011, Aquino warned striking workers at Philippine Airlines that they could be charged for "economic sabotage." In 2013, the country saw only one work stoppage.

Now, Benavidez suggested workers know Duterte is on their side. "If I have a president like Duterte, who would shame employers in public, my confidence as an employee will be boosted," the acting undersecretary said.

In July, during a state-led mediation process, contract workers fighting for permanent jobs at food producer NutriAsia clashed with security personnel. The following month, Mexico's Coca-Cola Femsa decided to leave the Philippines, after a move to lay off workers triggered a large strike.

Though some protests have turned ugly, Benavidez said the strikes have been manageable.

Edgardo Lacson, chairman of the Employers Confederation of the Philippines, or ECOP, said the increased labor activism is not ringing alarm bells just yet. "If [affected companies] are involved in essential services like banking, telecom, transport, or are of national interest -- that would be alarming," Lacson told Nikkei.

It is anyone's guess how long the critical industries he cited will remain stoppage-free. In September, a union at PLDT, the largest telecom company, filed a strike notice. Call center agents at Alorica made a similar move, the first in the $24 billion local outsourcing industry. At both companies, job security was the primary demand, according to reports.

Early this month, three major business groups -- ECOP, the Philippine Chamber of Commerce and Industry, and the Philippine Exporters Confederation -- joined forces to oppose a bill they say would essentially ban contractual labor.

The legislation in question is Senate Bill No. 1826, also known as "The Security of Tenure and End of Endo Act of 2018." Endo refers to "end of contract," or the practice of hiring and replacing workers every five months to skirt a law requiring regularization after six months. This keeps labor costs low, since regular employees are entitled to benefits like paid leave.

Duterte in September asked congress to fast-track the bill.

"It is important that we pass this into law, to finally put an end to work schemes like 'endo' and labor-only contracting," said Senator Joel Villanueva, the bill's principal author. The legislation would benefit 1.9 million workers in the private sector alone, he said.

The bill in effect bans all job contracting, even outsourcing of seasonal workers, opponents argue.

"To ban all forms of job contracting will be disastrous, particularly to micro, small and medium enterprises," the business groups said in a joint statement. "Higher cost of doing business plus lower productivity rates shall give a lot of our [smaller employers] no choice but to close shop or retrench employees."

Legislators have put forward other pro-labor bills, too, ahead of midterm elections next year. Proposed measures include expanding maternity leave from two to three months, giving workers two months of extra pay annually, and mandating a nationwide daily minimum wage of 750 pesos, from up to 512 pesos depending on the region.

Investors are getting nervous.

Evangeline Daquilanea, a senior consultant at Willis Towers Watson, said these bills increase anxiety among foreign companies that have already suspended expansion plans, wary of another proposal to curtail income tax holidays to pave the way for a corporate tax cut.

"These are the things that companies are actually quite antsy about -- if [business in the Philippines] will be sustainable at all," she said.

At stake is the country's competitiveness. Corporate investors "may look at other countries" with fewer labor headaches, PCCI President Alegria Sibal-Limjoco warned.

For now, Duterte's pro-labor approach looks like a victory for the working class. An unprecedented 303,000 employees have been made permanent since he took office, according to Benavidez. Workers have reaped around 2.5 billion pesos ($46.4 million) worth of monetary benefits from voluntary arbitration, the labor department says.

Japanese electronic parts maker Murata Manufacturing felt the impact this year, when it was ordered to make over 400 workers regular employees in just two weeks. This meant the company was obliged to extend benefits like food allowances. Murata says its personnel costs surged 20%.

But companies with shrinking profit margins cannot expect much sympathy from workers hit by near-decade-high inflation.

"To ban all forms of job contracting will be disastrous, particularly to micro, small and medium enterprises"

The Trade Union Congress of the Philippines, the largest moderate labor group, said at least four member unions have asked their employers to renegotiate collective bargaining agreements due to rising commodity prices.

The Trade Union Congress on Oct. 22 petitioned for a 334-peso increase in the daily minimum wage on top of the current 512 pesos in Metro Manila.

Lacson said employers could absorb only a 20-peso daily hike. "We have one of the highest minimum wages in ASEAN already," he said.

Still, Lacson is optimistic the Security of Tenure bill will reflect the interests of businesses in its final form. "We don't bother the president with this," he said. "We talk to the economic managers, who advise him on what to do." There are even some signs that Duterte is starting to rethink his labor populism.

In September, he blamed strikes organized by a leftist group called the Kilusang Mayo Uno, or May First Movement, for factory closures. This month, he fired Labor Undersecretary Joel Maglunsod, a former leftist labor leader, amid friction with the Communist Party.

Lacson said Duterte's recent moves are encouraging. "We hope he would eventually see the light," he said.

Benavidez also said the government will favor "regulation" of contractual labor "rather than prohibition." But Trade Union Congress spokesman Alan Tanjusay said Duterte must follow through and abolish contractual labor.

Rising living costs, worsening traffic and perennial flooding are all eating into take-home pay, Tanjusay said. The barely growing wages, he said, are a "recipe for social upheaval."

"Right now, Duterte's popularity rating is still high, but when it comes to a point when it is difficult to [appease] people, Mr. Duterte will have a problem," Tanjusay said.

Protecting the interests of both workers and investors is always a tough balancing act, especially in a country where a fifth of the population is poor and many live on the minimum wage.

In December 2016, a study by the Philippine Institute for Development Studies, a state think tank, warned against banning contract work. "It appears that the need for immediately ending endo is overblown and could significantly impede achievement of inclusive growth," researchers at the institute said, arguing that such jobs "play valuable roles in keeping the Philippine economy efficient, competitive and inclusive."

Some ordinary workers say being on a regular payroll is not everything.

Rica, 19, became a permanent staff member at a fast-food company in June after working on contract for over a year. "But what's more important for me is to have a steady job, a workplace where people aren't fighting ... and a company that does well."