GUIMBA, Philippines -- Harvest time in the Philippines usually lifts the spirits of the country's 2 million rice farmers, but this year the mood in the agricultural heartlands north of Manila is gloomy.

"This is such a serious tragedy that hit us," said Roy Valdez, a farmer in the town of Guimba, where roads are covered with unhusked rice drying in the sun and paddies are dotted with mechanical harvesters and water buffaloes.

Valdez, 50, has been tending a half-hectare plot he inherited from his parents since he was 15. Traders bought his recent crop for 12 pesos ($0.24) per kilogram, below the production cost.

An influx of cheaper imported rice has sent farm-gate prices in the Philippines -- the price a commodity fetches where it is grown, before transport -- to an eight-year low. The impact of the imports, largely from Thailand and Vietnam, has triggered demands to abolish a still-fresh law that was supposed to make the domestic grain supply more secure and affordable while enhancing farmers' competitiveness over the long haul.

Some experts say farmers need to be patient, but it is hard to be patient when you cannot pay your bills. Either way, the controversy has thrown government plans for further agricultural liberalization into doubt, under a president who has focused primarily on his violent campaign against drugs and crime. 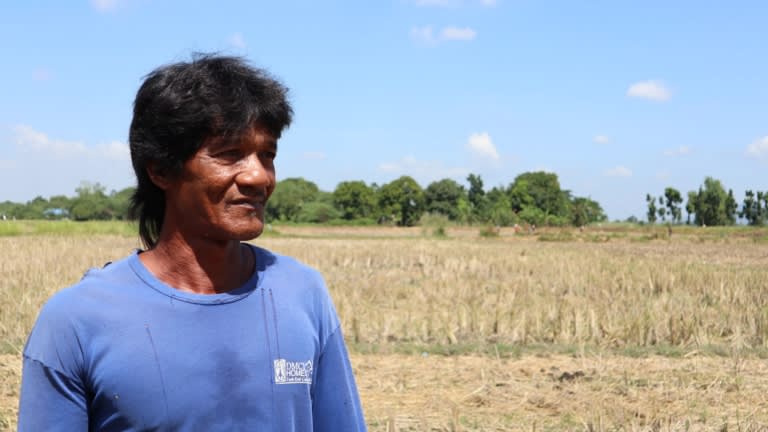 Roy Valdez, a farmer in the town of Guimba north of Manila, is feeling the pain from Duterte's rice liberalization policy. (Photo by Cliff Venzon)

Now, after a flood of foreign rice and multiple interest rate increases by the Philippine central bank, inflation has settled at an average of 2.8% this year -- well within the 2% to 4% official target. The September figure stood at 0.9%, the lowest since early 2016.

The law, which imposes 35% tariffs on imports from Southeast Asia and 40% from elsewhere, comes with competitiveness-boosting features built in. A total of 10 billion pesos, or $200 million, collected from the tariffs will be deployed annually over a period of six years to bankroll machinery, seeds and interest-free loans for farmers.

Nevertheless, groups such as the Peasant Movement of the Philippines insist the legislation should be repealed.

Rice is both a political and emotional issue in the Philippines. It is a dietary staple especially for the poor, who spend a fifth of their incomes on it. Past administrations vowed to upgrade the rice-growing sector to ensure self-sufficiency for the country, but made little headway due to underinvestment in irrigation and mechanization. 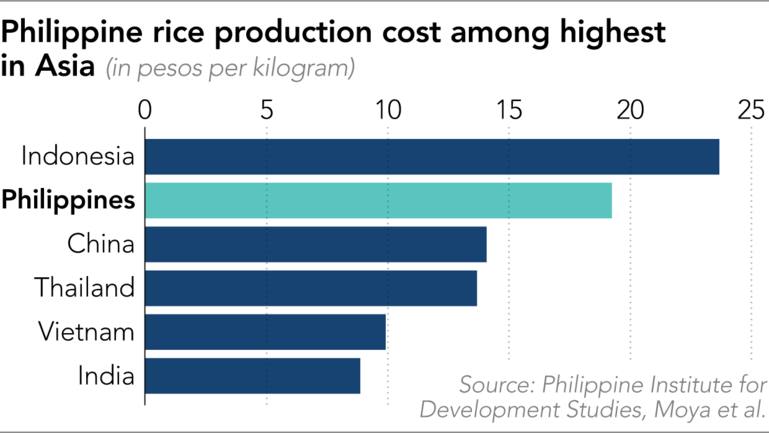 While the Chao Phraya and Mekong rivers have helped propel the rise of Thailand and Vietnam as rice exporters, the Philippines lacks bountiful natural irrigation sources. So although it has a proud history of rice-planting, and hosts the International Rice Research Institute, the archipelago remains a net importer.

Many Filipinos see this as a "national embarrassment," according to researchers at the Philippine Institute for Development Studies, a state think tank.

"I think we can feed the country with government support," said Daisy Hermano, 55, another farmer in Guimba who also sold her harvest at a loss.

After joining the World Trade Organization in 1995, the Philippines kept the rice industry protected until 2017, when import quotas expired. Then, last year, as commodity prices soared and midterm elections loomed, Duterte told lawmakers that the Rice Tariffication Law had to be passed urgently.

The two congressional chambers controlled by the president's allies obeyed, but disagreements erupted within the cabinet. 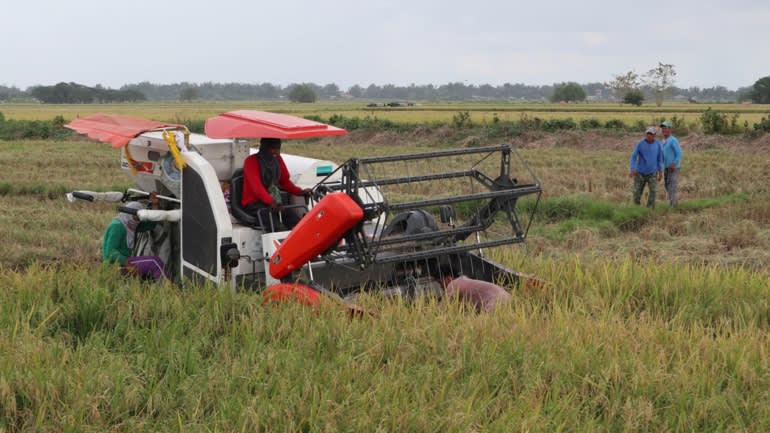 The Philippines is catching up with regional neighbors in the mechanization of agriculture. (Photo by Cliff Venzon)

The agriculture secretary at the time, Emmanuel Pinol, opposed the policy on the grounds that domestic farmers were not prepared for more foreign competition. He clashed with Duterte's economic brain trust, which advocated liberalization, and was ultimately transferred to a different government post.

The law also stung the state-owned National Food Authority, which had monopolized imports while granting licenses to a few importers. The NFA had been accused of mismanaging its role and causing last year's shortage. Former NFA head Jason Aquino, one of the many retired military officers in Duterte's cabinet, was forced to step down.

This year, the government awarded import licenses to 200 companies and granted over 2,000 import clearances, paving the way for less-expensive foreign rice, even factoring in the tariffs. Farmers are crying foul, while proponents of liberalization, including business groups and economists, argue their problems are simply "transition pains."

That may be, but the administration is feeling enough heat to offer relief.

Wary that farmers' frustration will dent his public support, Duterte has ordered the government to buy local rice at a premium, while the agriculture department has vowed to distribute cash assistance to farmers. "This tariffication is a mode that is intended to serve the greater interest of the majority of the people," the president said in September. "The solution is let's buy [the local produce]. We lose [money], but that's why we collect taxes -- to lose."

On Monday, the money-losing NFA, which keeps a buffer stock of rice, said it will buy unmilled rice from local farmers at 19 pesos a kilo and resell it for less than the prevailing retail price.

Government officials even considered safeguard measures to rein the imports back in -- including doubling the tariffs -- but abandoned the idea. Secretary Pernia said it was "just a knee-jerk reaction." Critics question why the decline in retail prices of rice has not matched the sharp fall of farm-gate prices. As of early October, the weekly average farm-gate prices of unmilled rice -- purchased from farmers -- were down by 29% to 15.56 pesos a kilogram while regular milled rice was 18% cheaper at 37.53 pesos.

The Philippine antitrust watchdog is looking into possible collusion among importers to manipulate prices. But Agriculture Secretary William Dar told the Nikkei Asian Review that criticisms of the policy are simply premature.

"We are just starting the whole thing," Dar said last Wednesday, when he formally launched a 10 billion peso Rice Competitiveness Enhancement Fund, or RCEF. "Give it a chance for a year."

He said the subsidy fund, which will give farmers free equipment and seeds, will halve production costs to 6 pesos per kilogram. "That is the intent, to reduce it to the level of Vietnam for a period of six years."

The program, Dar said, will make farmers more competitive and the country less reliant on imports "in due time."

In its October report, the U.S. Department of Agriculture said it expects the Philippines to import 3.1 million metric tons this year, significantly more than the 2 million tons the country needs. This would make it the world's second-largest importer after China.

With the surplus, the U.S. projects the Philippines' imports to fall 23% to 2.4 million tons next year.

To keep imports somewhat in check, Dar has urged his Thai and Vietnamese counterparts to strictly enforce phytosanitary standards in their customs procedures. "There is a lot of imported rice coming without clearance," he said. 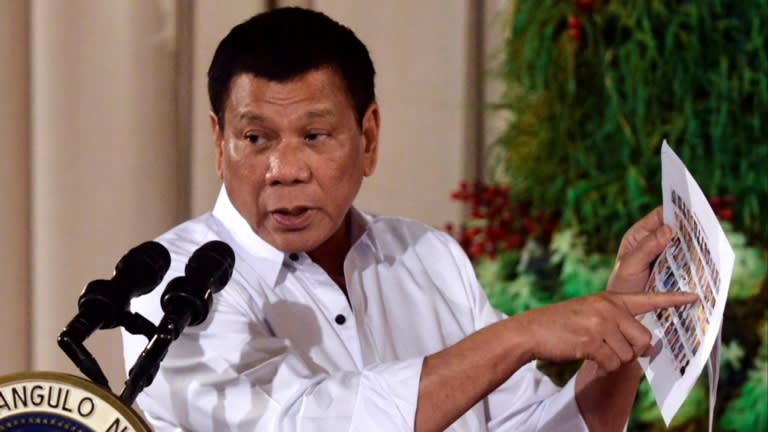 Duterte pushed the Rice Tariffication Law, and is now pushing relief measures to help farmers cope with its impact.   © Reuters

Meanwhile, the rice controversy is giving opponents of other agricultural reforms ammunition.

Sugar farmers are using it to fight plans to open up their sector. Currently, the amount of imports is determined by the Sugar Regulatory Administration depending on harvest projections, and inbound shipments are subject to a 5% tariff.

"The high price of sugar affects the competitiveness of the sugar-using manufacturing industries," said Rolando Dy, executive director of the Center for Food and Agribusiness at the University of Asia and the Pacific, explaining the case for liberalization. "For example, baked products, coffee mix and confectionery are disadvantaged by imports from Indonesia and Malaysia."

But Senator Juan Miguel Zubiri, who hails from a southern sugar-producing province, said: "I will fight against the liberalization of the sugar industry for the precise reasons that it will kill 5 million people directly and indirectly and it will affect provinces nationwide."

Asked about broader liberalization, Dar replied, "I don't want to talk about it now." The agriculture secretary said he is focused on rice and African swine fever, which is threatening the country's $4 billion hog industry. Government officials insist the disease, which has killed over 50,000 pigs in mostly backyard farms, remains manageable. Even though the rice law has been a lightning rod for criticism, economists still hail it as a positive game-changer.

Those calling for repeal "are the guys calling for the past, and that past hasn't really made the farmers better off," stressed Ramon Clarete, former dean of the University of the Philippine School of Economics.

Roy Kempis, an agricultural economist at the Pampanga State Agricultural University, argued that if anything, the government should resist the temptation to placate farmers with handfuls of cash, since the cash will not last. Instead, Kempis called for attracting more private investment in agriculture.

"The RCEF could provide some relief but it will not be the sole determinant in successfully upgrading the rice sector. The government is only a small player in the rice industry. The private sector is [bigger]." 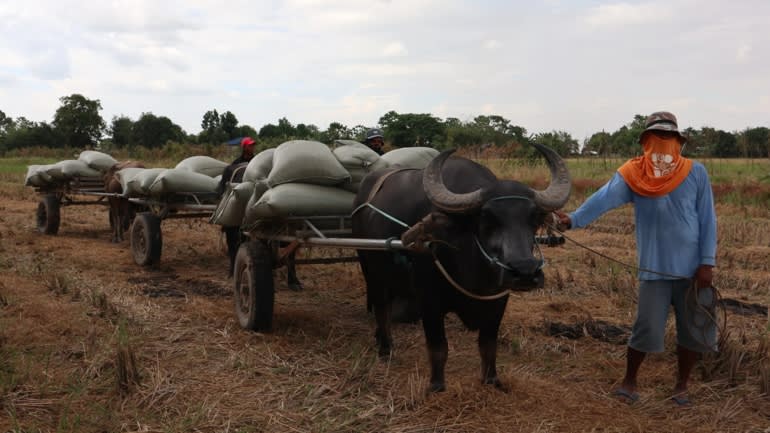 Farmers in Guimba use water buffaloes to haul bags of rice. (Photo by Cliff Venzon)

Bureaucratic efforts to help farmers have been unproductive in the past. Even the name of the RCEF echoes that of the Agricultural Competitiveness Enhancement Fund, a financial assistance program for farms and fisheries that the state think tank described in 2012 as "one of the greatest program failures among many in recent years," due to mismanagement.

Dennis Coronacion, chair of the political science department at the University of Santo Tomas, said the government must ensure subsidies are given to those in need, and warned that losing more support from farmers could erode Duterte's high public approval ratings. "Government assistance is usually subject to patron-client politics," Coronacion said.

To make the RCEF work, Clarete suggested organizing small farming cooperatives to ensure efficient use of the free machinery, and to avoid letting politically connected farmers dominate the assistance. Dy, at the University of Asia and the Pacific, favors cash handouts for the next three harvest seasons, as cheaper imported rice is dampening farmer morale.

Valdez, the farmer in Guimba, said he has yet to receive the money but plans to pay off the 15,000 pesos he borrowed for the recent planting season.

"I am also thinking of just selling my farm," he said.