Foreign investment pledges in the Philippines dropped 51.8% in 2017 to the lowest level in 12 years.   © Reuters
Asia Insight

Incentives behind the Philippine outsourcing boom hit the chopping block

MANILA -- Philippine President Rodrigo Duterte's administration received an impassioned plea from within its ranks on the night of April 11.

"May I appeal to the government not to kill the goose that lays the golden eggs, our industries and investors," Charito Plaza, director general of the Philippine Economic Zone Authority, said before a crowd of foreign investors at the World Trade Center in Manila.

Plaza was speaking to more than 2,000 executives at an event celebrating investors' contributions to the country's $305 billion economy over the last two decades. The speech could not have been timelier.

Her audience is growing more anxious by the day. Congress is set to reconvene in May, and Duterte's allies have filed a bill for part two of his Comprehensive Tax Reform Program. The initiative is a major policy overhaul aimed at funding a $160 billion infrastructure drive.

The first package of measures -- the Tax Reform for Acceleration and Inclusion Act (TRAIN), passed in December -- cut personal income taxes but raised levies on products such as coal and fuel. Now the government wants to push through the second package, which would gradually lower corporate income tax to 25% from 30% while curtailing incentives currently enjoyed by large companies. Many big players are registered with PEZA, a key investment promotion agency. 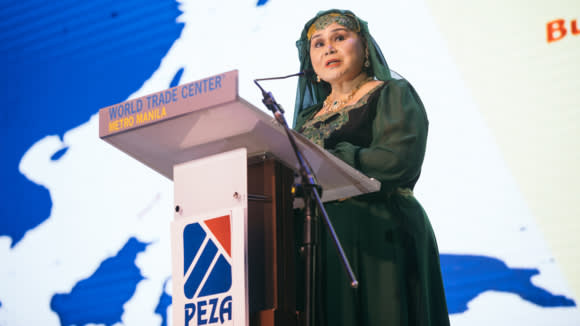 Charito Plaza, chief of the Philippine Economic Zone Authority, delivers her warning on the government's proposed tax reforms in Manila on April 11. (Photo by Jilson Tiu)

Currently, the authority grants export-oriented companies income tax holidays of up to eight years. After that, their gross income is subject to a perpetual 5% tax.

The Department of Finance, however, wants the tax breaks to be based on performance -- meaning they might not be extended to all. The 5% tax, meanwhile, is to be replaced with a 15% levy on net taxable income.

"TRAIN 2 has become a sword of Damocles hanging over the head of PEZA and the industries and investors," Plaza told reporters after her speech. "All industries have submitted their position papers and everybody is against it." 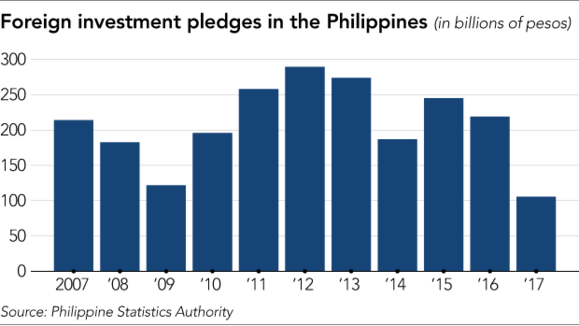 The numbers do not lie: Approved foreign investments, or so-called investment pledges, fell by 51.8% last year to 105.6 billion pesos ($2.02 billion), according to the Philippine Statistics Authority. That is the lowest level in 12 years. "TRAIN created fears in 2017 that the government might change rules in the middle of the game," Plaza said in February.

The Philippines' traditional defense and trade partners have criticized the president's brutal war on drugs, which has left thousands of suspects dead. Bristling over human rights concerns raised by the U.S. and European Union, Duterte in 2016 told leery investors to "pack your bags" and called then-President Barack Obama a "son of a whore."

In Beijing, Duterte announced a "separation" from the U.S. as he wooed Chinese investors. It was around that time that foreign investment pledges began to dwindle.

Since then, other reasons to rethink investment in the Philippines have arisen. The U.S. elected the protectionist Donald Trump, prompting American companies to focus more on the home front. And Islamic State-aligned militants kept the city of Marawi, on Duterte's home island of Mindanao, under siege for five months.

Although actual foreign direct investment in the Philippines hit a record $10 billion last year, Trinh Nguyen, a senior economist at Natixis, stressed that pledges have now dropped two years in a row. "What is worrying, of course, is the deterioration of the pledges, which suggests that future inflows will likely be weak." 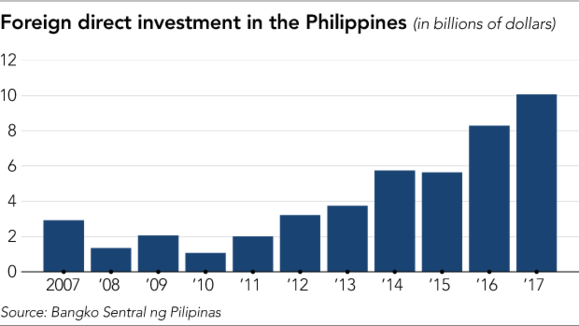 FDI inflows have grown steadily in recent years, thanks to improving macroeconomic conditions and an anti-corruption drive launched by Duterte's predecessor, Benigno Aquino. Even so, proponents of tax reform argue the existing rules have failed to make the Philippines truly competitive.

The country lags behind its neighbors in terms of FDI, and its 30% corporate income tax -- the highest in Southeast Asia -- is a major reason. Vietnam, a smaller economy, pulled in nearly $36 billion last year, dwarfing the Philippines' figure.

The regional competition for FDI is only intensifying.

Indonesia earlier this month unveiled a road map to become one of the world's 10 largest economies by 2030, partly by attracting foreign investors into select industries: food and beverages, textiles and garments, autos, chemicals and electronics. It also plans to offer incentives for investment in technology. Thailand, which has seen FDI taper off, is gunning for a comeback with its $45 billion Eastern Economic Corridor, where investors are entitled to tax breaks. "Regardless of which government is in office, or when the election will be held, the EEC plan will continue, with certainty," Prime Minister Prayuth Chan-ocha was quoted by Reuters as telling Japanese investors last year, assuring them that the program would continue once the country reverts to civilian rule.

In the Philippines, PEZA has helped to turn the business process outsourcing industry into a new economic pillar, alongside remittances from Filipinos working abroad. Call center jobs provide vital fuel for domestic consumption, which accounts for two-thirds of the economy.

A combination of investment incentives and a young, English-speaking workforce allowed the Philippines to overtake India as the world's call center capital. The BPO sector chalked up an estimated $24.5 billion in revenue last year, equivalent to around 8% of gross domestic product. Convergys, a call center company headquartered in the U.S. state of Ohio, is now the Philippines' biggest private employer, with 57,000 full-time workers on its payroll, according to the American Chamber of Commerce of the Philippines. Business process outsourcing centers like this one raked in about $24 billion in total revenue last year, equal to roughly 8% of the Philippines' GDP. (Photo by Eloisa Lopez)

But in 2017, BPO-related investments declined 32% to 4 billion pesos. This threatens ambitious goals for 2022 set by the Information Technology and Business Process Association of the Philippines: to grow the sector's revenue to $38.9 billion, and to increase the head count to 1.8 million from 1.15 million in 2016.

Some are already feeling the change in the industry environment. A human resources manager at a call center company said a major American client just completed its pullout this year. "Losing contracts is normal in the industry, but from an HR point of view, I've seen more staff being relegated to floating status," said the manager, who declined to be named out of concern for job security.

The Department of Finance insists the state is losing 300 billion pesos annually because of the fiscal incentives, and that the perks should be targeted at emerging sectors. "The world is changing and there are many new industries that are developing, such as robotics, data analytics [and] artificial intelligence," Finance Secretary Carlos Dominguez said last Friday. "These are the kinds of industries we want to attract, because AI is poised to take over some of the lower-end business process outsourcing businesses."

May I appeal to the government not to kill the goose that lays the golden eggs, our industries and investors

Plaza said there is a reason the last four administrations left the incentives untouched. "It's our incentives that are the first consideration of investors, not infrastructure, logistics and supply of raw materials, because we are still deficient in these factors," she said. The policy "has been kept by four administrations because it has worked."

Like Duterte, Plaza hails from Mindanao. The feisty politician and army reservist took office at PEZA in September 2016, replacing the retiring Lilia de Lima, who had led the agency since its creation in 1995.

De Lima managed to get herself reappointed by four presidents -- a rare feat in the Philippine bureaucracy -- and was regarded as a darling of foreign investors. She is an aunt of Sen. Leila de Lima, a Duterte nemesis who is now in jail on drug charges. While De Lima left big shoes to fill, Plaza is no stranger to wooing investors. She helped craft the Special Economic Zones Act of 1995, which created PEZA.

Plaza has said she will urge the administration to maintain the status quo, but it could be an uphill battle. The president's economic managers, who have been given a free hand while Duterte focuses on crime and terrorism, support TRAIN. Duterte has yet to speak publicly about the tax policy.

Duterte skipped the PEZA event on April 11, missing an opportunity to hear about the agency's successes. The president was in Hong Kong, after talks with Chinese leader Xi Jinping in Hainan the previous day. Meeting with Filipino expatriates on April 12, Duterte lashed out at critics of his drug war and vowed to improve conditions for overseas workers. "I do not have to answer to anybody," he told a cheering crowd in Kowloon. "Only to the Filipino people." The Duterte administration is not the first to rethink the tax incentives. The Aquino government also considered scaling them back, but a clash between the finance and trade departments resulted in a deadlock.

This time, though, the economic managers appear to be on the same page. At a forum organized by the American chamber in January, finance and trade officials teamed up to explain the proposed measures to investors.

That show of unity was a worrying sign for anyone who wants TRAIN 2 stopped. And the government's attempts to calm investors may be sowing confusion.

In early April, Trade Secretary Ramon Lopez assured the Aerospace Industries Association of the Philippines that its members would still get tax breaks under the proposed law, since aerospace is a sunrise industry in the Philippines. John Lee, who chairs the association, said the incentives would help achieve a goal of quadrupling sector revenue to $2.57 billion by 2022. 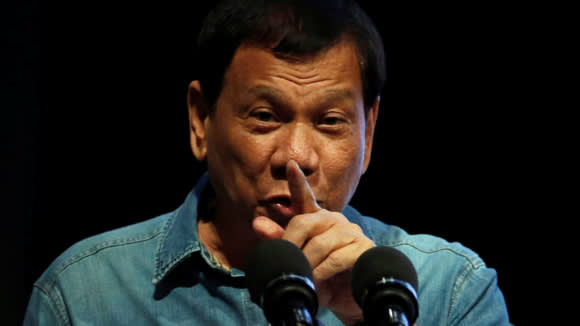 Duterte has given his top economic officials free rein while he focuses on crime and terrorism.   © Reuters

Lopez said the government is making a "concerted effort on investment promotion," citing upcoming roadshows in Japan, Germany and the U.S., as well as the infrastructure buildup. Duterte's recent visit to China yielded $9 billion in new investment commitments.

And yet, the government wants to change an incentive program that has proved to be an investment magnet.

Plaza seems to be hoping Duterte and his economic team will have a change of heart. "I still believe that President Duterte and Secretary Dominguez will have an open mind."