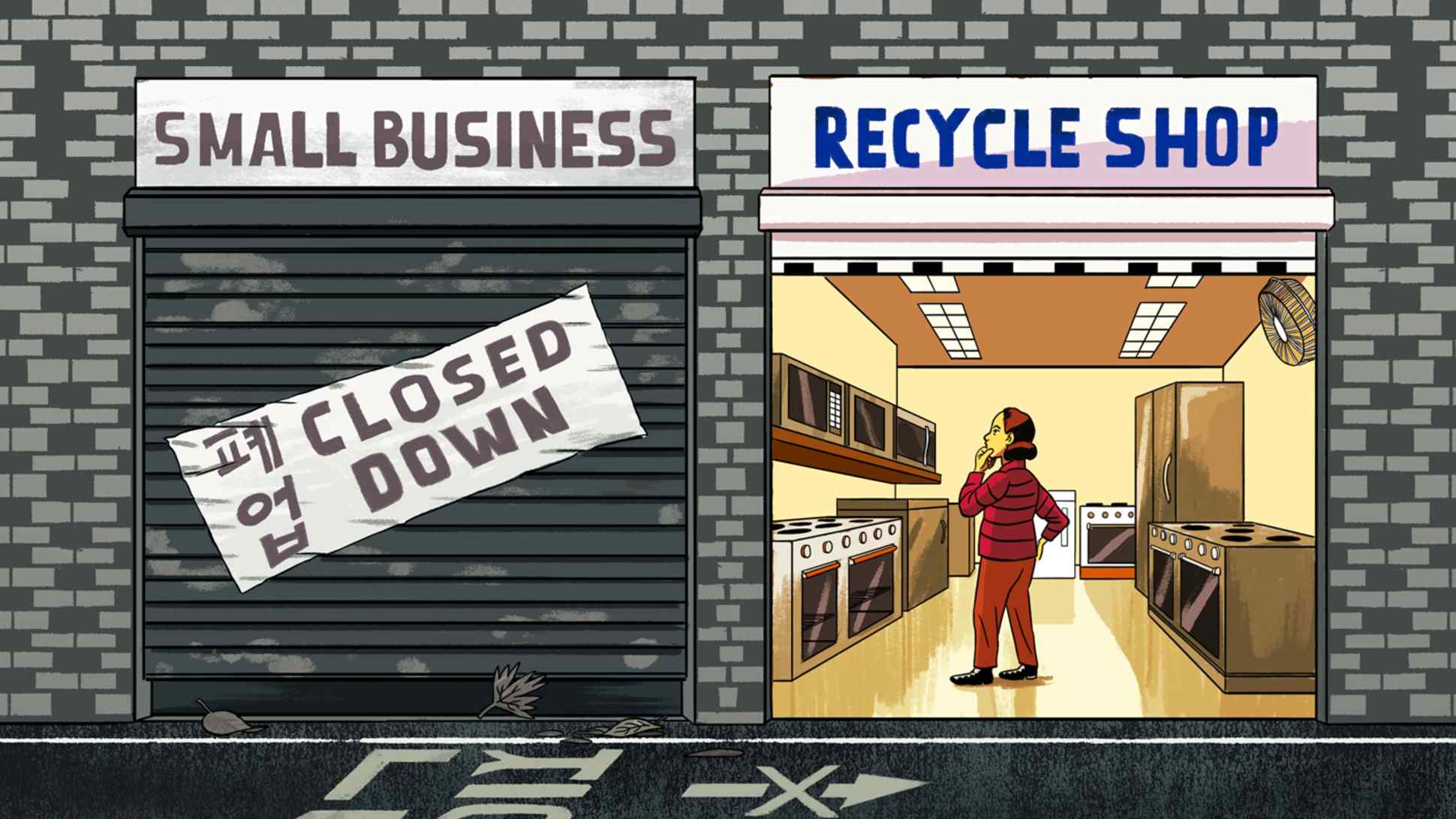 ANSAN, South Korea -- In a country long beset by sluggish economic growth, one couple has found a booming niche rounding up and reselling the pieces of entrepreneurs' broken dreams.

In Ansan, a working-class city south of Seoul, Jung Yeon-hwa and her husband, Park Je-won, buy equipment from small businesses that go under -- mostly restaurants, convenience stores and small retailers -- and then resell the items to people looking to open similar ventures. Their store, called Gabbujubang, employs a staff of about 10.

The flow of merchandise into and out of Gabbujubang tells the story of South Korea's street-level economic crisis, a constant churn of independent eateries and retailers that open and close, often saddling their owners with losses. A refrigerator from one failed barbecue restaurant could end up in a similar new establishment in another part of the country just days later.

Gabbujubang is also a window into the country's struggles with elderly poverty, as even those who were fortunate enough to retire in their early 60s from stable, well-paid jobs leave with one-time payments instead of lifelong pensions, forcing them to seek another income stream.

South Korea's export-led economy is forecast to grow around 2% this year and is facing headwinds from a trade spat with Japan and spillover from the U.S.-China trade tensions. In a speech in the legislature on Oct. 22, President Moon Jae-in said the economy is in a "grave" situation.

The trying times are particularly hard on the self-employed. Last year, according to government data, 586,209 small businesses in South Korea went bust. National tax agency statistics that compare the number of new small businesses -- retailers, eateries and accommodations -- with closures show that last year, for every 10 businesses that opened, 8.9 shuttered, up from 7.7 closures in 2016.

According to the Bank of Korea, only 40% of these businesses remain open for three years, and 27.5% make it to five years. 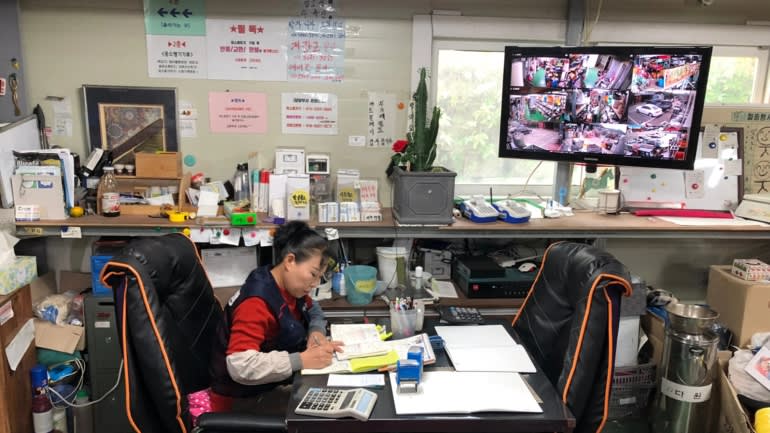 "When 10 places close, 10 open in their place. People come here looking for an answer and we provide them a service. It's much cheaper to buy the used items here than to buy them new."

The couple, both aged in their 50s, has run Gabbujubang for 18 years. "We've always been busy, but nowadays, because the economy isn't good, we're busier than ever," Jung said.

Park and Jung run the business out of a four-story building on a sprawling lot off a busy highway, nestled amid cornfields and a cluster of mountains. The top-selling items are refrigerators, stoves and sinks, which, along with other heavy merchandise, are stored outside of the main building and on the ground floor.

On the next floor up are deep fryers, buffet tray tables, pots and pans. On the top floor are the smallest items: bundles of spoons, chopsticks, forks, beer and soju glasses, knickknacks and wall hangings.

One sign, propped on its side behind a plate of broken glass, reads, "We aspire to be a company it feels good to work at." Kitchen sinks piled up outside the Gabbujubang store in Ansan, South Korea. (Photo by Steven Borowiec)

Jung spends her days seated at a desk covered in receipts in front of a flat-screen television that runs feeds from surveillance cameras. There is rarely a quiet moment. As she was writing out a receipt for a couple purchasing chopstick holders and wall hangings for their restaurant, Jung groaned as her phone went off yet again, her ringtone blaring 1970s Korean pop music.

She took the call from a man asking if she was able to sell a certain kind of restaurant-grade grill. She explained she didn't have it, hung up and went back to the receipt.

Moments later, a woman approached her desk with a stack of plates. "1,200 won each for these is too expensive," the customer said, haggling over a price equivalent to about $1. Jung clicked her tongue and said, "Look at them, they're like new. And if you bought them new, they'd cost twice that much."

After perusing the shelves and trying two more times to talk down the price, the customer eventually paid the full amount and left.

The name Gabbujubang translates roughly as "place that gives riches."

"We hope everyone who comes here gets rich," Jung said. "But nowadays, that isn't easy." When Moon took office in May 2017, he pledged to improve the playing field for small businesses and boost the economy through measures meant to spur consumption. The centerpiece of those efforts is a sharp increase in the minimum wage, which the government said would encourage more spending.

His administration also set a limit of 52 working hours per person per week and announced plans to allocate funds to small and mid-size enterprises.

So far, the policies have not achieved much success. A report issued in July by the country's central bank concluded that the government's moves have had the unintended effect of worsening conditions for independent businesses, with higher labor costs cutting into the already thin profit margins of street-level proprietors. "While there have been claims that the minimum wage increase has had a positive effect on working people's incomes and lives, the difficulties in the labor market are continuing," the report said.

Meanwhile, Moon's administration has been beset by a corruption scandal involving the recently resigned justice minister, denting his popularity. Used plastic food items from shuttered stores on the shelves of the recycling shop in Ansan. (Photo by Steven Borowiec)

The political opposition has steadily claimed that the current government ought to drastically reconfigure its approach to the economy. "The Moon Jae-in administration must admit the problems with its minimum wage increases and job creation policies, and must craft policies based not on populism but on the fundamentals of the economy," Shim Jae-cheol, a lawmaker from the conservative opposition Liberty Korea Party said in a statement on Oct. 17.

South Korea's problems with income inequality and a weak safety net for retirees predate Moon's inauguration, however, and other analysts say the government's policies are not the cause of the hardships for businesses.

"The problem of self-employed businesses is excessive competition, as many people who lost manufacturing jobs became self-employed, and their sales have been stagnant due to the stalled growth of household incomes," said Choi Pae-kun, a professor of economics at Konkuk University in Seoul.

"For these businesses, even small shocks can lead to inevitable closure," Choi added. "The Moon Jae-in administration's sharp increase of the minimum wage is unrelated to the high closure rate." 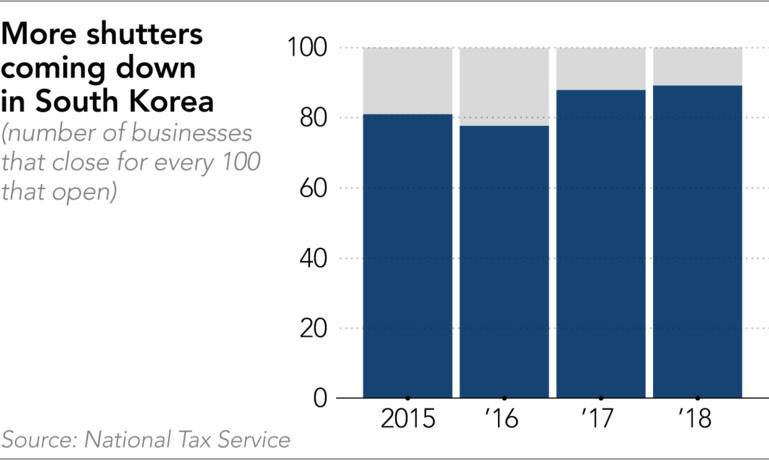 At Gabbujubang, running the show on the floor is Shahid, a middle-aged man from Pakistan. His responsibility is to manage the flow of incoming and outgoing goods, as well as to repair any damaged or nonfunctioning equipment.

That morning, the proprietor of a shuttered restaurant had come to sell a cup sterilizer and an appliance that stores cooked rice. Shahid said Gabbujubang had purchased them for 15,000 won each, and would then sell them for 80,000 won -- 20% lower than anywhere else, he said.

The key to Gabbujubang's business is high volume, Shahid explained. "We have many customers. Many people come here because they know our prices are cheaper."

When a business goes under, they can call Gabbujubang to offer up their wares and ask for a driver to come clear out the space. Once back at Gabbujubang, the used equipment first goes to a room adjacent to the entrance where it gets scrubbed down and prepared for resale.

She sounded stoic when asked if she had any complicated feelings, as her own business prospered as a result of others' failures. "It hurts my heart when I see people coming here with their used stuff," Jung said.

"But I feel happy when I see people coming in to buy things for a new business. Life is funny like that."