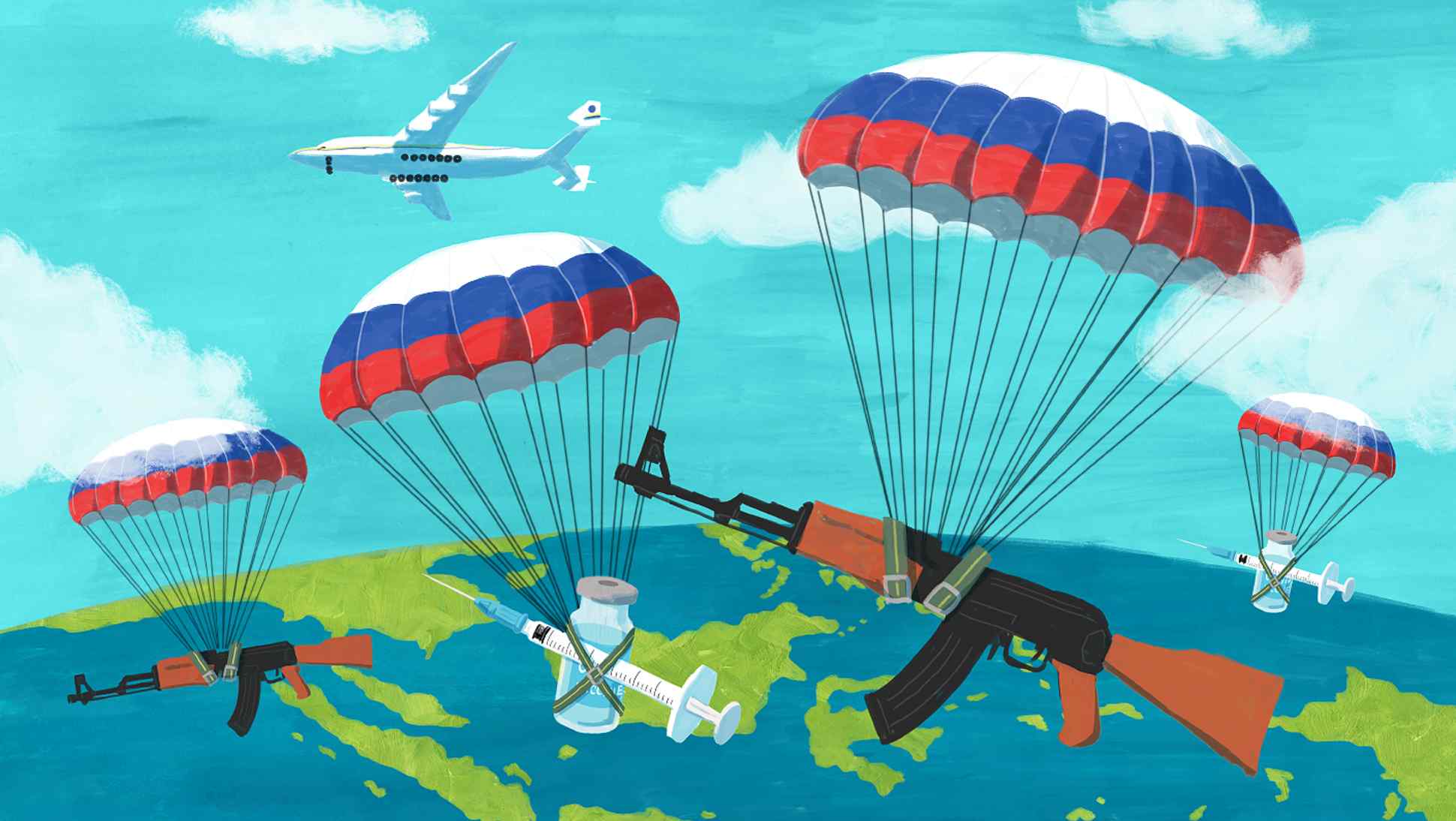 Guns and jabs: Russia courts ASEAN caught between US and China

MOSCOW -- On a tour of Russia last month, the leader of Myanmar's military regime met top defense and arms industry officials, visited a shipyard and helicopter factory, and dressed up in academic regalia to receive an "honorary professorship" from the Defense Ministry.

"Thanks to Russia, our army has become one of the strongest in the region," Senior Gen. Min Aung Hlaing told Russian Defense Minister Sergei Shoigu.

At least a few Southeast Asian leaders might say the same thing.

After largely disappearing from the region following the end of the Cold War, Russia is becoming a more visible presence -- mainly thanks to arms sales but also promises of COVID-19 vaccines and efforts to strengthen weak trade ties. While the U.S. and China jostle for influence, and the Association of Southeast Asian Nations struggles to deal with the Myanmar crisis, Russia is positioning itself as an alternative partner.

Russian leaders mostly neglected Southeast Asia in the first decade after the Soviet Union collapsed in 1991, according to Dmitry Mosyakov, a Southeast Asia expert at the Russian Academy of Sciences' Institute of Oriental Studies. Deteriorating relations with the West, however, rekindled their interest. The region became a high priority because of its rapid economic growth and strategic location between the Pacific and Indian oceans.

Catering to ASEAN members eager to modernize their militaries has allowed Russia to punch above its economic weight, Mosyakov explained.

"We have a situation where if you just look at the trade and investment numbers, Russia doesn't look like a significant player," Mosyakov said. "But then you take a look at an area like security, and it turns out that Russia is right on the level of [the U.S. and China] and can change the balance of power in the region at any moment."

He added, "You don't need to have a trade turnover of $500 billion to possess a decisive trump card in Southeast Asia -- it's enough to just offer somebody the most advanced Russian weapons." 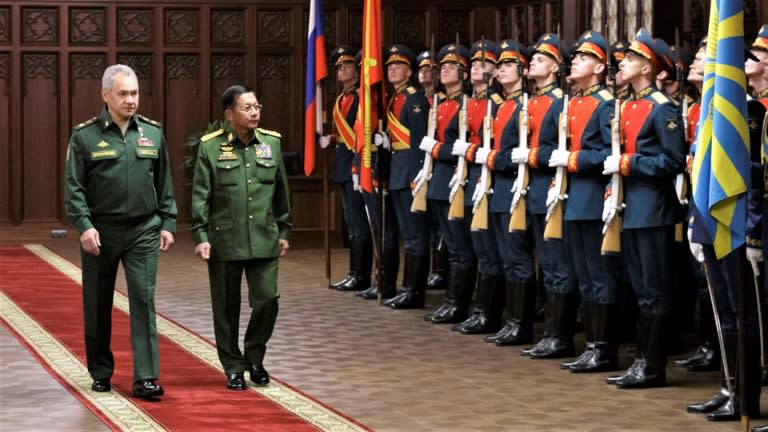 Indeed, Russia was Southeast Asia's largest arms supplier between 2000 and 2019, racking up $10.7 billion in sales. The U.S. made sales worth $7.9 billion, while China logged $2.6 billion for the same period, according to Stockholm International Peace Research Institute (SIPRI) data, compiled in a report published by Singapore's ISEAS -- Yusof Ishak Institute.

There are several reasons why Russia leads the market, explained Collin Koh, a maritime security research fellow at Nanyang Technological University in Singapore.

First, Russian arms exporters have fewer qualms than U.S. or European competitors about selling their newest gear to Southeast Asian customers. They also offer cheaper deals without obvious political strings attached. And Moscow is willing to accept barter payments from countries that are short on foreign reserves but have commodities to spare. 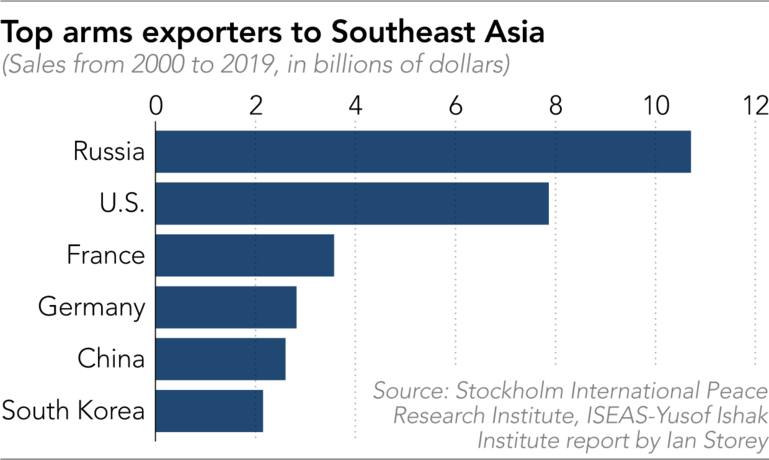 Vietnam is by far Russia's top Southeast Asian arms customer, accounting for 61% of sales over the past two decades, according to the ISEAS report. From 1995 to 2019, Russia sold $7.4 billion in weapons to Vietnam, including submarines, frigates, fighter jets, anti-aircraft missile systems and tanks. Their latest publicized deal, agreed in summer 2019, was a $350 million contract for a dozen combat training aircraft.

On a smaller scale, neighboring Laos has gradually stepped up Russian arms purchases and brought in Russian military specialists to help build an airfield. Next month, Laotian troops will participate in counterterrorism exercises in the Russian Far East -- the second time the two militaries have drilled together and the first time on Russian soil.

Laotian leader Thongloun Sisoulith declared in 2018 that "everything that is in the Laos armed forces is connected with Russia." 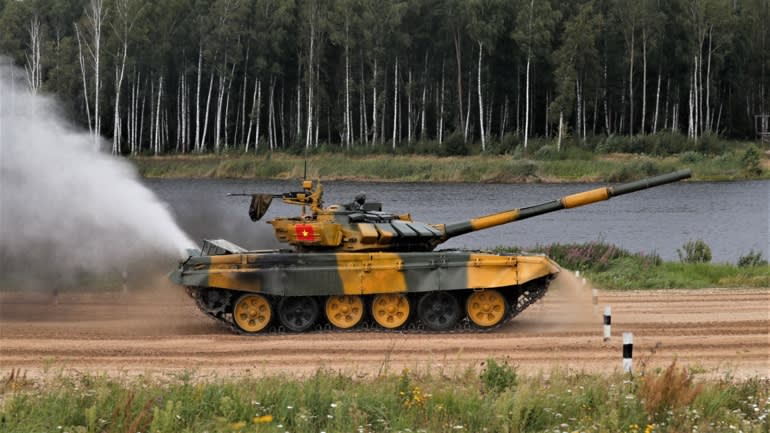 A T-72 B3 tank operated by a crew from Vietnam drives during the International Army Games in Russia in August 2020.   © Reuters

Lately, Russia's most conspicuous client has been Myanmar.

From 2010 to 2019, Russia sold an estimated $807 million worth of arms to Myanmar, second to China's $1.3 billion. In January, Russia agreed to supply surface-to-air missile systems, surveillance drones and radar equipment.

Spearheading Myanmar's push for more Russian hardware has been none other than Min Aung Hlaing, whose visit to Russia in June was his seventh in the past decade.

Besides buying weapons, the general told a Russian newspaper last year that over 6,000 Myanmar officers have studied at Russian military academies. "Officers who studied in Russia, who speak Russian, who are familiar with your technologies, have good career prospects with us," he was quoted as saying.

Contact between the two sides has only increased since the general's forces ousted the elected government of Aung San Suu Kyi on Feb. 1. Russia has opposed Western efforts to impose new sanctions against the Myanmar regime, which has killed hundreds of dissidents. 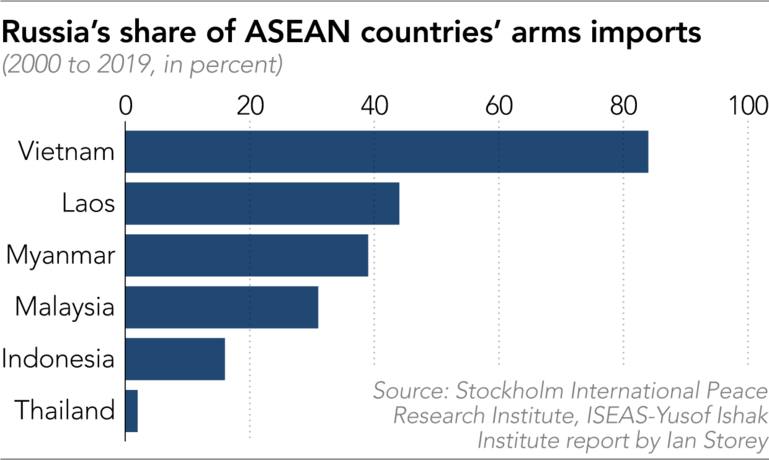 In late March, Russian Deputy Defense Minister Alexander Fomin became the first high-ranking foreign official to visit Myanmar after the takeover. In May, the chief general of Myanmar's air force, Maung Maung Kyaw, led a military delegation to Moscow to attend a helicopter expo. The Irrawaddy, an independent Myanmar news outlet, reported that the delegation discussed "20 megaprojects including procurement of arms and military hardware."

While critics accuse Russia of legitimizing the military government, Moscow says it is doing its part to support ASEAN's five-point consensus for ending the crisis. "In our contacts with Myanmar leaders, military leaders, we promote the position of ASEAN which should be, in our view, considered as a basis for resolving this crisis" and restoring "normalcy," Foreign Minister Sergey Lavrov said in Indonesia last week, according to Reuters.

How much arms translate into actual influence is up for debate.

While weapons may be a "trump card" as Mosyakov contended, there is no denying Russia's trade and investment figures with ASEAN are dwarfed by those of the U.S., China, Japan and Europe. At least some Southeast Asian nations are also wary of American sanctions targeting Russia's defense sector over its Ukraine policy and alleged election meddling. Indonesia is reportedly backtracking on plans to buy Russian Su-35 fighter jets, while a Philippine helicopter purchase is apparently on the brink as well.

Still, Koh said some militaries are so wedded to Russian equipment that replacing it is infeasible. "Some member states will continue to somewhat sidestep or completely ignore the sanctions policy."

The coronavirus pandemic, meanwhile, has presented Russia with an opportunity to show it can offer more than jets and choppers.

Many Southeast Asian countries have looked to Russia's Sputnik V vaccine. Vietnam, Laos, Myanmar, and the Philippines have registered the shot, which Russian President Vladimir Putin boasted is as "reliable as a Kalashnikov assault rifle."

Trial data published in The Lancet medical journal this year found Sputnik V had an efficacy rate of 91.6%. Pfizer and Moderna are the only other shots topping 90%. 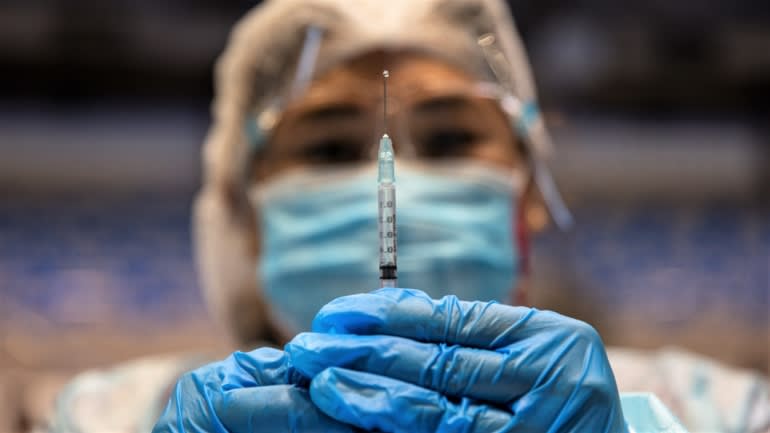 A health worker prepares a dose of Russia's Sputnik V coronavirus vaccine in Makati, Philippines, in May.   © Reuters

Indonesia and Russia are reportedly exploring joint vaccine production in the archipelago nation, while Thailand said in April that Putin had personally pledged to arrange a supply. Malaysia, too, has ordered 6.4 million doses, though its drug regulator has yet to approve the jab.

Of course, Russia needs to deliver. Officially, Vietnam has only received a gift of 1,000 doses so far. But local media reported that state-owned Vabiotech could be ready to bottle Sputnik V domestically as early as this month, aiming for 5 million monthly doses. Vabiotech says it received semi-finished vaccines on June 28, but that finished vials would be sent to Russia for checks.

Min Aung Hlaing claimed last Friday that 2 million Sputnik doses would be coming to Myanmar starting this month. The Philippines received an additional 170,000 doses late last week, according to the public news agency, on top of 180,000 already provided.

One expert suggested that if Russia wants to change perceptions, following through on Sputnik V would be a good start.

"I think [Sputnik] has introduced the concept of Russian trade and capabilities to a lot of governments and individuals in South and Southeast Asia that had previously had little experience in dealing with Russia," said Chris Devonshire-Ellis, founding partner of Dezan Shira & Associates, an advisory firm that works with investors across Asia.

"A successful product, delivered as promised and on reasonable terms is going to increase familiarity, trust and even friendship, what is termed as 'soft power.'" 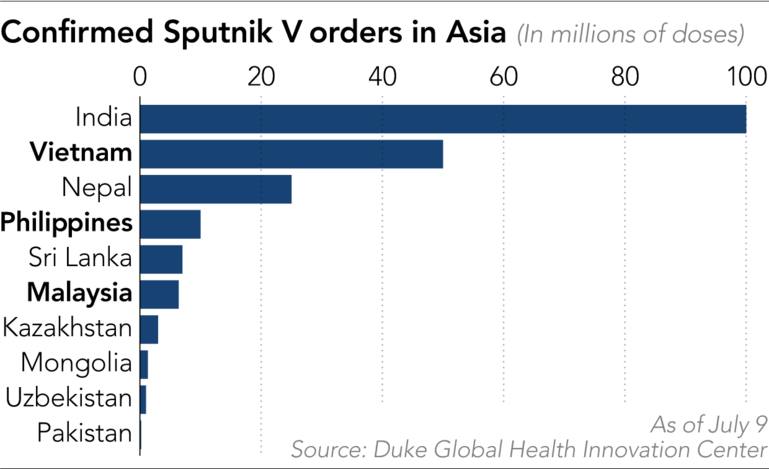 Beyond Sputnik V, Russia may have found another vehicle for changing its image: the Eurasian Economic Union (EAEU) free trade bloc.

Founded in 2015, the Kremlin's answer to the European Union consists of Russia, Kazakhstan, Belarus, Armenia and Kyrgyzstan -- a combined market of 183 million people with a gross domestic product of $5 trillion.

Russian Federal Customs Service data shows trade with Vietnam rose to $5.7 billion in 2020 from $3.9 billion in 2015, a 46% increase. Devonshire-Ellis said the EAEU appeals to Southeast Asian countries because it offers them a relatively large market but is unlikely to send a flood of cheap goods their way.

"It should be remembered that the EAEU itself is not as competitive or demanding as, for example, the European Union has become," said the veteran Asia hand. "Although Russia is a sizable manufacturer, and the largest member of the EAEU, it does not have the massive export push of competitive products that frightens so many small to medium-sized countries when it comes to free trade with China."

Devonshire-Ellis added that for Southeast Asian exporters, Russia is also a convenient transport route to Europe and Central Asia. Shipping goods to the European Union through Vladivostok can cut delivery times by 50% compared with the Suez Canal route. ASEAN states' comfort level with deeper Russian engagement remains to be seen. When an ISEAS survey in late 2019 asked over 1,300 experts across the bloc about their preferred "third party" to hedge against the U.S.-China rivalry, Japan and the EU were favored overwhelmingly, at 38.2% and 31.7%, respectively. Russia came in at 6.1%, though it was more popular in Laos, at 26.1%, and Myanmar, at 10.2%.

Nevertheless, ASEAN and Russia have a "Comprehensive Plan of Action" to cooperate on everything from security and smart cities to health and disaster management from 2021 to 2025.

"Russia could certainly play a bigger role, since Russia is still a major power and could actually become a potential heavyweight for a number of those countries in Southeast Asia who don't want to become embroiled in whether to choose the United States or China," Koh said.

"Having more players in the region is better than having less, so Russia's role is certainly important."