Online bullying has become an Asiawide problem that governments' legal arsenals have so far been unable to tame. © Illustration by Hiroko Oshima
Asia Insight

TOKYO -- It is less than a month since 22-year-old Hana Kimura, an up-and-coming professional wrestler, died. She was known for taking part in the popular Japanese reality show "Terrace House," which follows the lives of six young people who live under the same roof while looking for love.

The show, which has earned a devoted global fan base thanks to Netflix, has fans grieving around the world.

Lala Keo is one of them.

The 21-year-old U.S. resident has been an avid viewer since 2018 and describes Kimura as "bubbly" and "energetic."

"When I found out about Hana's death, I was truly shocked," Keo told the Nikkei Asian Review. "I didn't even know her personally but I actually cried for about three hours."

"Terrace House" aired its first season almost eight years ago, in 2012. Since then, the show has turned into a cultural phenomenon, especially among people in their teens and 20s. Last year, it ranked No. 2 on Netflix's most-watched list in Japan.

However, the series has come to an abrupt end; production of the current season was terminated following Kimura's death.

In her last Instagram post, Kimura shared a picture of herself and her cat with the words, "I love you, have a happy long life. Sorry." Several notes have been found in her apartment, one addressed to her mother.

Kimura's death has been linked to online abuse, as she had posted a series of self-harm images on Twitter shortly before passing away and had implied she had suffered from cyberbullying.

Many believe hateful, malicious comments like "Go die" and "You're disgusting" started to flood Kimura's social media after an episode of "Terrace House" in which Kimura and another cast member held a heated argument.

Following Kimura's death, many of the abusive comments and even the social media accounts of the people who posted them were deleted.

Toshiyuki Niino, a friend of Kimura's and a fellow "Terrace House" cast member, talked to the Nikkei Asian Review about his firsthand experience with online bullying. Toshiyuki Niino, a friend of Kimura's and a fellow "Terrace House" cast member, talked to the Nikkei Asian Review about his first-hand experience with online bullying. (Photo by Ken Kobayashi)

Shortly after joining the reality show, hundreds of anonymous social media users started to shower abuse on him. "I receive at most 200 messages a day full of insults like 'creepy' from all over the world," Niino said.

The reason is trivial; in one show, Niino drank beer directly from a bottle after a female member had a sip from it. Since then, many "Terrace House" fans started described him as "creepy."

On Twitter, hundreds of people tagged him in tweets with harsh words as well as "vomit" emojis.

Niino's stalkers are trying to get under his skin because they didn't like his appearances or anything he did on the show. But Niino says "Terrace House" is edited in a way that creates a character that is "different" than his actual self. "I was surprised to see so many people judging me as a bad guy based on the show," he said.

"I know in real life there are many people who support me," Niino said. "So I could understand my attackers are only one of the few. But if you can't think in positive ways, like me, you can easily believe that everyone in the world hates you."

For the fiscal year ending in March, the number of people who called a Japanese government-affiliated hotline for online abuse was over 5,100. The number was a little over 1,000 nine years ago.

With Kimura's death focusing attention on the issue, Japanese government officials have spoken up about changing regulations to prevent cyberbullying.

But cyberbullying is not solely a Japanese problem. Cases like Kimura's can be found around the world, with prominent young figures across Asia also falling prey.

In 2019, South Korean female singers Sulli and Goo Hara, both of whom had been K-pop stars, died by suicide after facing immense online aggression.

Taiwan and Thailand have had similar cases. 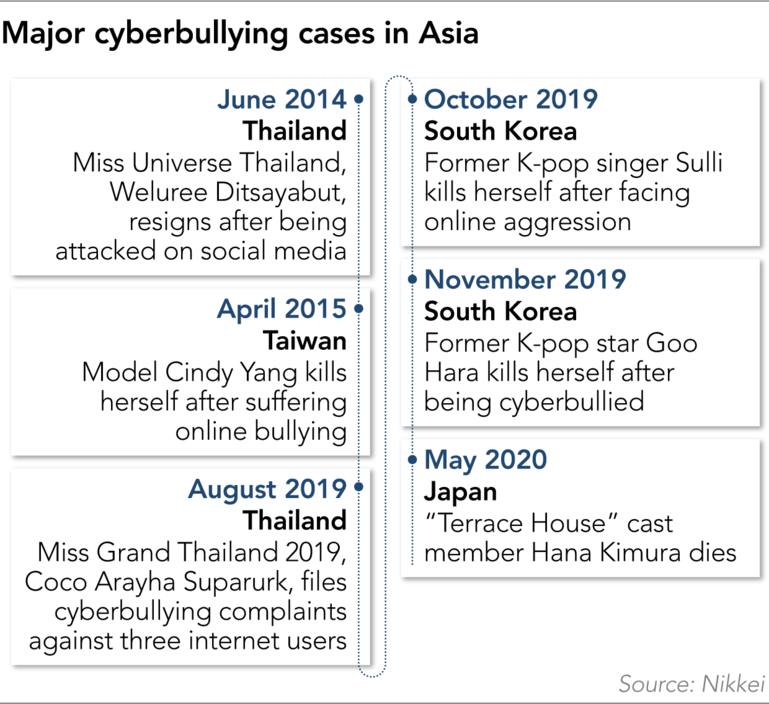 Cyberbullies do not limit their attacks to celebrities. According to a survey conducted in 2018 by French market research company Ipsos, 17% of parents around the world said their child had experienced cyberbullying.

In India, 37% of parents answered that their children have been cyberbullied. That was the highest figure among Asian countries. It was 17% in China, 13% in South Korea and 4% in Japan, although Ipsos director Mallory Newall points out that many Japanese parents of bullied children remain unaware of the problem.

"It's possible that the [real] number could be slightly higher," Newall said.

The rise of social media platforms has given people new venues to unleash their aggression. Joanne Wong, head of Touch Cyber Wellness, a nonprofit agency based in Singapore, says the anonymity of social media facilitates cyberbullying.

"The moment a person initiates an attack online, they have an advantage," Wong said. "It is hard for many victims to defend themselves."

Internet penetration in the Asia-Pacific reached 56% in January, and the region has 2.4 billion internet users, according to data from We Are Social, a U.K. based research company. Almost 90% of those users are also active on social media, and this figure is still growing. "Social media is such a big part of people's lives," said Poh Yeang Cherng, principal consultant at Singapore's Kingmaker Consultancy. "It's not just a platform for interaction but a place for their online personas."

Now the coronavirus pandemic has people spending even more time on social media.

According to a global survey by We Are Social, 50% of female respondents and 44% of males between the ages of 16 and 64 said they have spent more time on social media since the outbreak began forcing many people to stay home.

The deaths of Kimura and other young stars have sparked a debate about reining in online hate speech and other forms of abuse, but the fact is governments have struggled to come up with effective solutions.

In Japan, those who have been defamed online can ask telecom service providers and website operators to voluntarily disclose anonymous attackers' IP addresses, names, and street addresses. Pedestrians are glued to their phones while walking around Tokyo. Social media use has had negative consequences throughout Asia. (Photo by Ken Kobayashi)

However, many "actually give up [trying to gain] their assailants' information," said Yoshikazu Saisho, an attorney with the Minato International Law Office. Since few companies voluntarily disclose their customers' personal information, targets often have to file multiple lawsuits against service providers and assailants.

According to Saisho, it takes approximately six to 12 months and costs at least 1 million yen ($9,300) to obtain such information.

"Terrace House" cast member Niino says he is not considering any legal actions against his attackers, given the time and cost involved.

In the meantime, facing the swell of concern about online defamation, the social media industry is trying to strengthen its bylaws.

On May 26, shortly after Kimura's death, a Japanese industry group issued an emergency statement declaring that its members -- who include Line, TikTok's ByteDance and Twitter Japan -- will ban users from defaming others and terminate the accounts of those who fail to comply.

The ruling Liberal Democratic Party is mulling whether to amend a law to make it easier for targets to obtain information on their attackers, relax information disclosure requirements and tighten criminal penalties for defamatory libel.

In South Korea, legislators in October began pushing a bill. It proposes making anti-cyberbullying education compulsory in schools and allowing the identification and prosecution of attackers who post malicious online content. 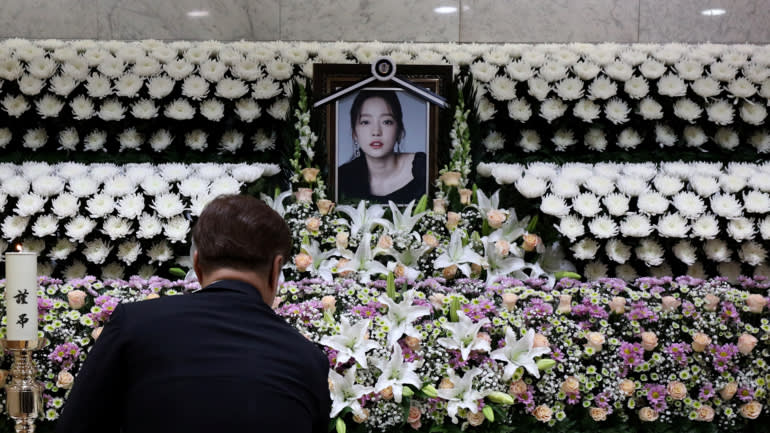 A man pays tribute at a memorial in honor of the K-pop star Goo Hara in Seoul in 2019.   © Reuters

In 2014 Singapore legislated the Protection from Harassment Act, which prohibits bullying and harassment online or off; people who intentionally harass or cause distress face fines of up to 5,000 Singapore dollars ($3,600) or up to six months in prison or both.

If an online bully is anonymous, the target can apply for a court order to identify the culprit using information such as a username or website address, according to Ushan Premaratne, partner at the law company Withers KhattarWong.

As the legal crusade gains momentum, freedom of speech could be a casualty.

"The internet should be a place where people enjoy their freedom of speech and countries sure do not want to become the next China," says Tommy Chan, senior lecturer at the U.K.'s Northumbria University.

Or, possibly, the next Philippines. On Monday, a Manila court found two journalists guilty of cyber libel in a case revolving around a story posted eight years ago that reported ties between a businessman and a judge. The journalists, who deny guilt, say the ruling, as well as the law in question, puts freedom of speech at risk.

Back in Japan, Kazuki Kitazawa, an attorney with the Cyber Law Japan Eichi Law Offices, stresses that protecting targets should "be balanced with freedom of speech," and that regulation by "law cannot fix every single issue we face."

Researchers point out that education about how to use the internet needs to be improved.

"People need to be taught that the internet is a public place and that digital footprints exist," said Jun Sakamoto, a professor at Japan's Hosei University who is calling for a re-examination of public education. "Many young people don't realize that the comments you make online will likely be there forever."

Niino, the "Terrace House" cast member, agrees that spreading awareness of how online comments can hurt people is essential and hopes that regulations and education will move together in the right direction.

"Social media has given people the power to send positive messages and to come together against injustice," Niino said. This is reflected in movements like #MeToo and Black Lives Matter.

"I hope people use it not to attack others but to change society in a positive way," Niino added.

Some netizens in Japan are currently searching for those who attacked Hana Kimura, in a quest for revenge. Hana's mother, Kyoko, last month tweeted, "Please don't accuse someone about what happened to Hana. Please stop the hate spiral, so this doesn't happen again; so we can get closer to a world of compassion that Hana wanted."

Additional reporting by Kentaro Iwamoto in Singapore and Kim Jaewon in Seoul.