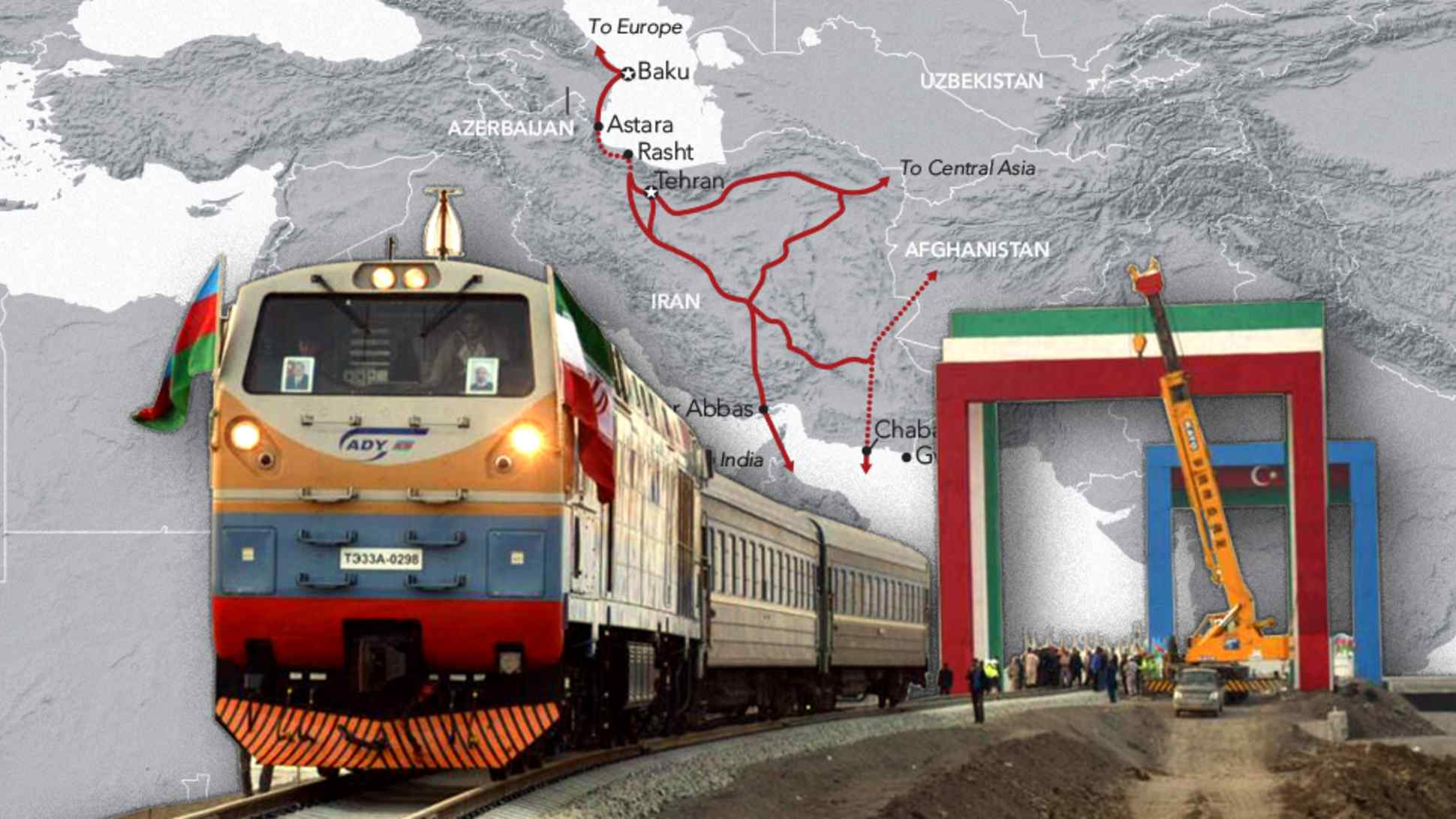 India and China jostle for influence in Iran and Central Asia

Each of the rising giants wants to be the one to shape a new regional order. Their competition for influence continues to unfold in Indian Ocean countries like the Maldives and Sri Lanka. But they are also pressing farther west, up into the Arabian Sea, Iran and the Central Asian states.

China has a potent weapon in its Belt and Road Initiative, which entails huge infrastructure investments across Central Asia and on to Europe. New Delhi, though, is pushing back hard with an alternative network of sea and rail routes called the International North-South Transport Corridor. So while Indian Prime Minister Narendra Modi and Chinese President Xi Jinping are to meet later this week, aiming to mend fences after a military standoff last year, their broader economic and security contest is only just beginning.

Sushma Swaraj, India's external affairs minister, talked up India's vision for the corridor during a visit to oil-rich Azerbaijan in early April. Swaraj said she and her counterpart, Elmar Mammadyarov, agreed that the INSTC "is an important initiative that can reduce time and cost [of delivering goods] by about 30% to 40%."

The 7,000km corridor connects India with Russia, though there are still gaps that must be covered with trucks. Compared with the traditional route through the Suez Canal, the completed corridor will reduce the transport time between Mumbai and Moscow to about 20 days, from around 40, according to the Japan External Trade Organization.

This has the potential to transform Eurasian trade -- and gives India far more flexibility and clout. The country's access to western and Central Asia has long been hindered by the presence of Pakistan. With the corridor, India can bypass its nemesis and procure Central Asian resources through Iran. One of the key links along the way is a rail line that crosses the border between Iran and Azerbaijan. The nuclear deal with Iran in 2016, under which Western powers lifted all sanctions, helped pave the way for investment in the Astara railway, as it is known.

In late March, Iranian President Hassan Rouhani visited Baku, the capital of Azerbaijan, where he and Azerbaijan President Ilham Aliyev welcomed the completion of the 10km stretch of track that crosses the border. The same day, the two leaders presided over a loan signing ceremony, with Azerbaijan lending its neighbor $500 million to connect two cities -- Astara and Rasht -- and finish the final missing piece of the corridor.

Iran expects the Astara-Rasht segment to be finished in about two years, and all INSTC rail segments are to be connected seamlessly after 2020. "Our southern Iranian ports will be a gateway to the Caucasus, Central Asia, Russia, and onward to Northern Europe and Eastern Europe," Rouhani said.

For India, Iran is the gateway through which it hopes to send clothing, chemicals and agricultural products to consumers in Central Asia and Europe, while at the same time procuring oil, natural gas and metals from Central Asia's landlocked countries. Gas is a priority, given the urgent need to curb India's air pollution, a byproduct of its brisk economic growth.

India has been actively courting Iran, and the Iranians have been receptive. Indian Prime Minister Narendra Modi welcomed Rouhani to New Delhi in February and told his guest, "It is a matter of great pleasure for us that an Iranian president has traveled to India after a gap of 10 years." Rouhani came bearing a special gift: a lease to manage the first phase of the Chabahar port project in the south of his country.

India has provided considerable support for Iranian port development and invested $500 million in Chabahar. The management deal allows an Indian company to run part of the port's multipurpose facilities and container terminal for 18 months. Clearly, India is convinced of Chabahar's strategic importance. Why? The answer lies along China's Belt and Road.

The China-Pakistan Economic Corridor is a 3,000km rail and road route from western China to Pakistan's Gwadar port, crossing over Pakistani-controlled territory in disputed Kashmir. The port, a major trading hub on the Indian Ocean, is operated by a Chinese company.

The Iranian port of Chabahar, meanwhile, is situated just 150km to the east of Gwadar. India's emphasis on the port appears to reflect its desire to contain Chinese activity in what it regards as its own backyard.

India also plans to fund a rail project from Chabahar to the Iranian city of Zahedan, on the border with Afghanistan. In January, India and Iran signed a railway cooperation agreement under which Tehran will purchase locomotives and freight cars from New Delhi. Upon completion, the project will connect the Iranian port to Afghanistan and onward to Central Asia.

Not to be outdone, China is also strengthening ties with Iran. It has begun sending freight trains to Tehran via Central Asia, placing the Iranian capital on its main transport route to Europe.

Within Iran, some sections of the Belt and Road and the INSTC overlap. This could be a boon to businesses but could also pose a political risk, if Beijing and New Delhi decide to play a zero-sum game.

"Even if China and India seem willing to enlist cooperation from each other, they would remain hostile to each other behind the scenes," said Takuya Murakami, a research fellow at the Middle East Institute of Japan.

"The INSTC could emerge as a counter to China's BRI," said Pankaj Jha, a professor of defense and strategic studies at O.P. Jindai Global University and a former research director at the Indian Council of World Affairs.

"While the BRI initiative is dominated by China and addresses only the communist giant's cause, the INSTC will be largely addressing the cause of developing countries and will be more fruitful in terms of complementarities, as well as fulfilling the aspirations of the people of the whole region," Jha said.

As China and India continue their tug of war, the countries caught in the middle aim to strike a balance and maximize the benefits. Iran, as we have seen, is eager to attract Indian investment. But it is also the biggest supplier of oil to China, and Chinese money is critical for Tehran's infrastructure plans.

In March, the Iranian government signed a deal with China Machinery Industry Construction Group to build a $700 million train line between the cities of Shiraz and Bushehr. 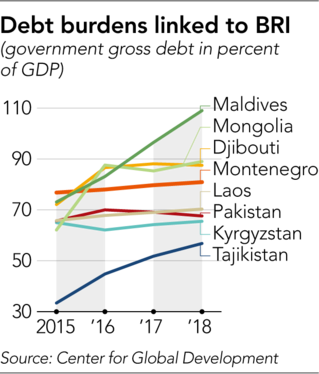 But India, which considers Central Asia part of its "extended neighborhood," may be able to take advantage of regional anxiety over China's growing power.

Belt and Road infrastructure projects have left some countries heavily indebted to China, particularly small and resource-poor states like Tajikistan and Kyrgyzstan. A Center for Global Development report published in March listed eight countries at "particular risk of debt distress" from related projects, including those two central Asian states. This debt trap could give China leverage to demand greater security and economic cooperation.

Russia, too, is concerned about its heavy dependence on China, despite their long-standing relationship. And Moscow's deteriorating relations with the U.S. and Europe are only increasing the importance of energy and other ties with India and Iran. Russian President Vladimir Putin has promoted the INSTC as a "flagship project."

India may have an opportunity to act as a counterweight, using the INSTC to increase its political, security, economic and cultural connections across the region.

"It was a great advantage for our country that big states like China and India are initiating such huge projects to export their goods and looking for new routes," Javid Gurbanov, the chairman of Azerbaijan Railway, told the Nikkei Asian Review in an interview. "Everyone needs additional routes. No one wants to depend on one route, and no one likes to put all eggs into the same basket."

Gurbanov said Azerbaijan has a positive view of both the Belt and Road and the INSTC, and is benefiting from both, though his country will "utilize the INSTC more."

"When you look at future possibilities of north-south [transport] ... In 2019 we plan to carry 2 million tons minimum, and it will increase in time as people will [become aware of] the route," he said. "In five years I think we can reach 10 million to 12 million tons."

India, meanwhile, is on the move elsewhere. In February, it achieved a major diplomatic breakthrough at another key point on the Indian Ocean, right under China's nose. It finalized an agreement with Oman that will allow Indian naval vessels to access the strategic port of Duqm. Under the pact, India will use the port for logistical support and ship maintenance.

Beijing has been investing heavily in an industrial park near the Omani port. "Certainly, that deal was completely unforeseeable," Murakami said. Access to both Duqm and Chabahar enhances India's ability to deter Chinese maritime expansion in the region.

An X-factor for both India and China remains Iran's global standing. In May, U.S. President Donald Trump is expected to decide whether to reimpose some sanctions on Tehran.

National interests are becoming increasingly entangled, and the 21st-century Great Game is about to enter an unpredictable new phase.