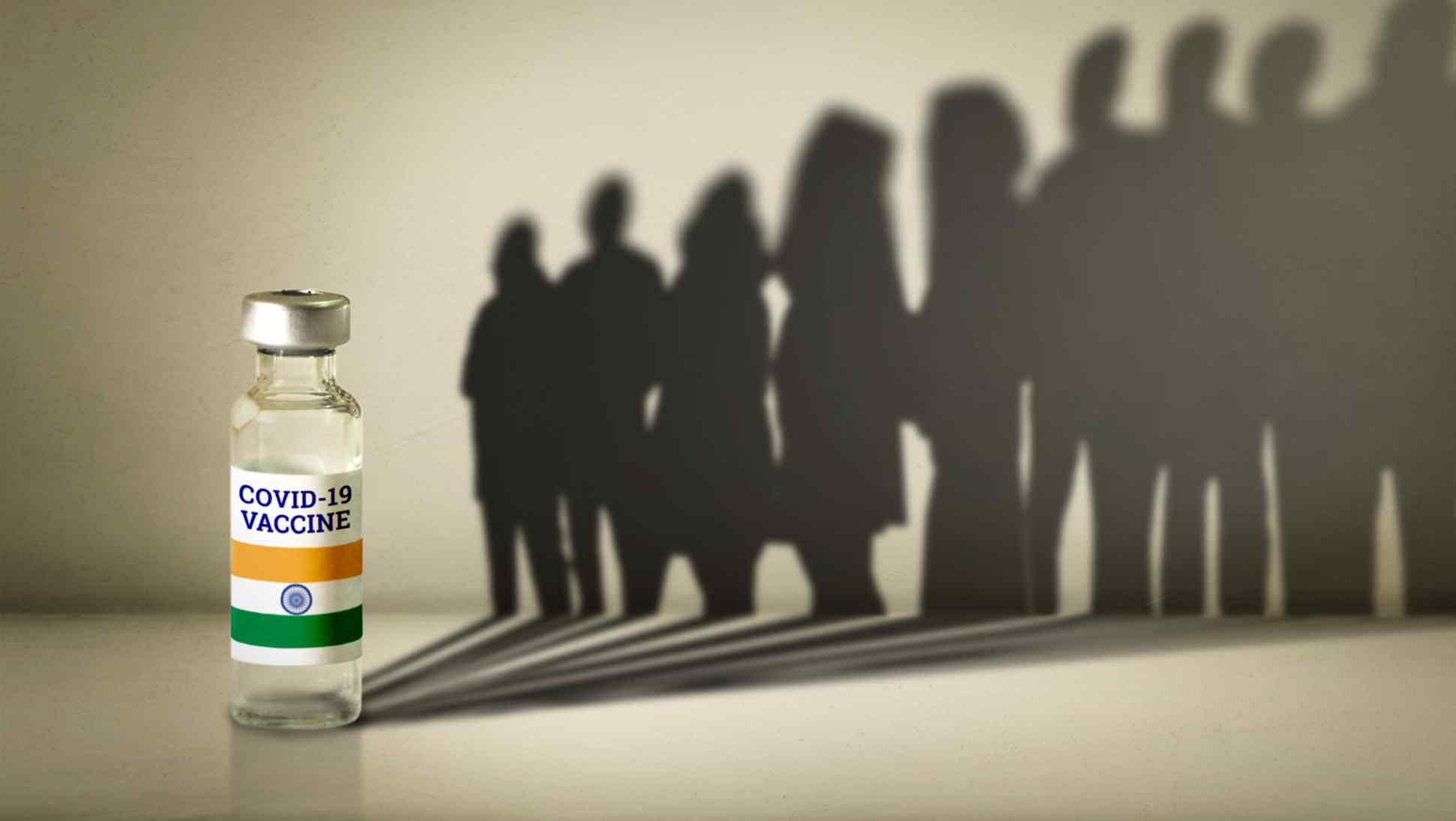 India is counting on a mass coronavirus inoculation effort combined with the shipping of domestically-manufactured vaccines to other countries in a bid to eliminate the threat of COVID-19 to its people.   © Nikkei montage/Source photos by Getty Images
Asia Insight

NEW DELHI -- Filled with optimism and anxiety, health care providers lined up to receive the first COVID-19 vaccine injections at a government hospital in the Indian capital on Jan. 16, the day when Prime Minister Narendra Modi kicked off a massive immunization drive aimed at inoculating 300 million people.

"I'm taking the plunge as it provides me with a sense of security," said an anesthetist, 35, who asked that her name not be used. The woman worries about her family as she works in the hospital's COVID-19 intensive care unit and thus remains at high risk for infection and potentially passing on the coronavirus at home, including to her three-year-old son.

Outside, dozens of government supporters celebrated by distributing laddoo, an Indian sweet, while chanting slogans in Hindi such as "it's possible if Modi is there."

After the U.S., India has the world's second-highest caseload, with more than 10.5 million infections and has reported over 153,000 coronavirus-related deaths. In the first week of the vaccination drive, about 1.3 million people got shots.

India's drug regulator earlier this month granted emergency use approval to the indigenous Covaxin vaccine developed by domestic company Bharat Biotech, and to the Oxford-AstraZeneca vaccine which is locally manufactured by the Serum Institute of India under the brand name Covishield. Both are two-dose vaccines administered 28 days apart. 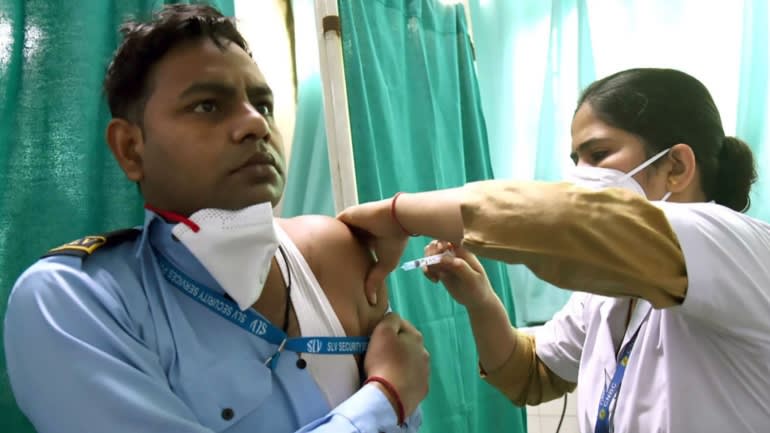 A security guard receives a shot from a health care worker on the first day of India's nationwide coronavirus vaccination drive in New Delhi on Jan. 16. (Photo courtesy of Government of India)

The Serum Institute -- the world's largest vaccine manufacturer by number of doses produced and sold at more than 1.5 billion annually -- has already made about 50 million Covishield doses, while Bharat Biotech has stocked 20 million doses of Covaxin. Four more vaccines are in preparation and expected to be available soon. They are developed by three Indian companies -- Zydus Cadila, Biological E and Gennova -- and Russia's Gamaleya National Center of Epidemiology and Microbiology. The Moscow-based research institute's Sputnik V will also be manufactured locally.

"As our vaccination campaign progresses, many countries in the world will benefit from our experiences," said Modi, who in a virtual appearance inaugurated the pan-India drive, describing it as "the world's largest."

Indeed, besides the domestic campaign, India has begun shipping its vaccines to neighboring countries with ambitions to offer them further afield to both protect its own population and win diplomatic points as regional rival China pursues its version of shot aid. But here are emerging concerns that New Delhi's outreach effort could strain supplies for the internal one.

India's vaccinations are taking place in stages, with 10 million health care providers to get them first, followed by 20 million other front-line workers including police and army personnel. Phase 2 will cover 270 million people over the age of 50, along with those having co-morbidities such as diabetes, high blood pressure and cardiovascular disease. The government has vowed to vaccinate 300 million people by July or August.

Modi lauded efforts by India's doctors, nurses and other front line workers for "nourishing hope in the atmosphere of despair" during the crisis. "There are hundreds of friends who never made it to their homes [and] sacrificed their lives to save [others]," he said, his voice choked with emotion. The government will pay the cost of inoculating the 30 million health care and front line workers. 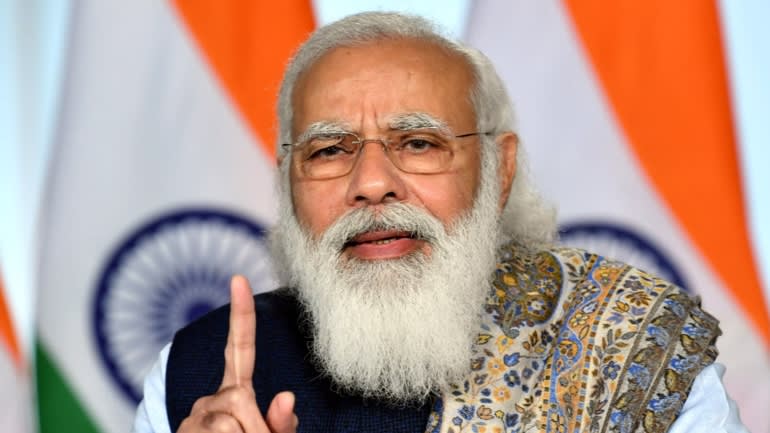 Prime Minister Narendra Modi speaks via videoconference at the launch of the inoculation campaign in New Delhi on Jan.16. (Photo courtesy of Government of India)

Public health experts say about two-thirds of the population of more than 1.3 billion need to be vaccinated to achieve herd immunity, an exercise that may take 18 months to two years. "As more and more people are immunized, the chain of transmission will be broken," Rajinder K. Dhamija, head of the neurology department at New Delhi-based Lady Hardinge Medical College, told Nikkei Asia. "Finally, vaccine is the only solution, and in the next 6 to 7 months India will see more vaccines [getting approved] to help it manage its enormous vaccination drive."

Jitender Singh, 36, a security guard at the Ram Manohar Lohia Hospital in the heart of New Delhi, felt "absolutely fine" after receiving the vaccine. "I was asked to sit in the waiting area for 30 minutes after being administered the shot to check if I was feeling all right," Singh said. "After that, I was allowed to continue my duty at the hospital."

But not all present at vaccination sites were comfortable. Some doubted the efficacy of Covaxin, which has yet to complete the Phase 3 clinical trials required under normal circumstances. According to official data, seven people across the country required hospitalization in the first three days of vaccinations, though it did not indicate which of the two vaccines they received.

Shakti, a nurse who gave only his first name, was one of the fearful. "I was selected randomly for vaccination [and] have some doubt about the efficacy of Covaxin," he said. "I'm not sure about signing the consent form," he added on the first day of the inoculation drive at a New Delhi hospital, underscoring the challenge of vaccine hesitancy.

Manish Jangra, founding chairman of the Federation of All India Medical Association, told Nikkei that some doctors and other health workers were not comfortable with Covaxin because of the lack of complete data. "We are not against this vaccination policy of the government [and just want] them to provide us with Covishield," Jangra said.

But the Indian health ministry counters that side effects were reported in only 0.18% of vaccine recipients and just 0.002% of people had been hospitalized following the first three days. "The data shows that we are in a situation of a lot of comfort," said V.K. Paul, the government's top health adviser, adding that the figures should dispel much anxiety. Vaccinating 300 million people, or a little less than the population of the U.S., within six to seven months is a huge task and, given the current pace, global observers may wonder whether India can achieve the target.

Immunizing large numbers of people is nothing new for the country. It runs one of the world's biggest vaccination programs, annually covering around 27 million infants and 29 million pregnant women. Besides, experience with nationwide general elections -- in which about 610 million people voted in seven phases in April and May of 2019 -- helps in organizing mammoth events.

By using domestically produced vaccines Modi's government not only aims to boost patriotism but also help itself financially. India has bought 11 million Covishield doses at a cost of 200 rupees ($2.73) each, excluding taxes, and procured 5.5 million Covaxin doses from Bharat Biotech. The company made a "special gesture" by waiving the charges on 1.65 million doses while the remaining 3.85 million doses were priced at 295 rupees each.

According to the government, Pfizer-BioNTech's vaccine would cost 1,431 rupees per dose, Moderna's would be 2,348 to 2,715 rupees, and Sinovac Biotech of China's 1,027 rupees. Therefore, domestically produced vaccines actually reduce the burden on New Delhi's treasury.

In addition to cost benefits, Covishield and Covaxin are also easy to transport. While Pfizer's vaccine requires storage temperature of minus 70 C, both the domestic vaccines can be stored at temperatures of 2 C to 8 C, which enables nationwide distribution in a country lacking deep-freeze cold chain infrastructure.

Still, experts caution that India's effort will only work if other countries also inoculate 60% to 70% of their people because, as Dhamija says, "even if you control it at home you may get it from outside owing to air travel." Thus, Indian-made vaccines have already arrived in neighboring Bhutan, the Maldives, Bangladesh, Nepal and Myanmar; the Indian Ocean nations of the Seychelles and Mauritius; and Brazil and Morocco. And other countries in South America, Africa and the Middle East are trying to procure them from India, which has assured the global community its vaccine production and delivery capacity will be used to fight the crisis. Already, 60% of non-coronavirus vaccines supplied worldwide are of Indian origin.

Analysts feel India's global image will receive a big boost from its COVID-19 diplomacy at a time when China has also delivered its own vaccines overseas. India's commitment to help others "reinforces its role as a responsible global stakeholder," said Harsh V. Pant, head of strategic studies at the Observer Research Foundation, a New Delhi-based think tank. "It allows India to punch above its weight in some ways because pharmaceutical is one area where India is seen as a global leader."

But the home situation may not immediately allow Modi's government to press ahead with offering vaccines elsewhere on a large scale. A backup plan might be needed to secure additional capacity to produce enough doses for export. In November, Foreign Secretary Harsh Vardhan Shringla said India may go for joint vaccine production in some countries if they are willing.

Notwithstanding India's positives, health care system bottlenecks exist. An ORF report this month said 38% of infants in India failed to receive all basic vaccines within a year of birth in 2016 for reasons ranging from "non-universality of vaccination coverage to factors like remoteness of large populations in distant towns or villages, lack of physical infrastructure, and the prevalence of misinformation surrounding vaccination."

A Eurasia Group note said that while the government is optimistic, constraints include limited vaccine production capacity even in best-case scenarios and the campaign will heavily rely on state governments with widely varying capacities and expertise. "Furthermore, effective coordination will be needed between the central and state governments, something that has not been Modi's strong point," the note said.

Nevertheless, the push is crucial to contain the virus. "After a lot of deliberations [these two vaccines] have been put into use," said Vijay Grover, a cardiac surgeon at the RML hospital who is more than willing to receive the shot to protect himself, his family and society at large. "We can't doubt everything that is happening in the country."