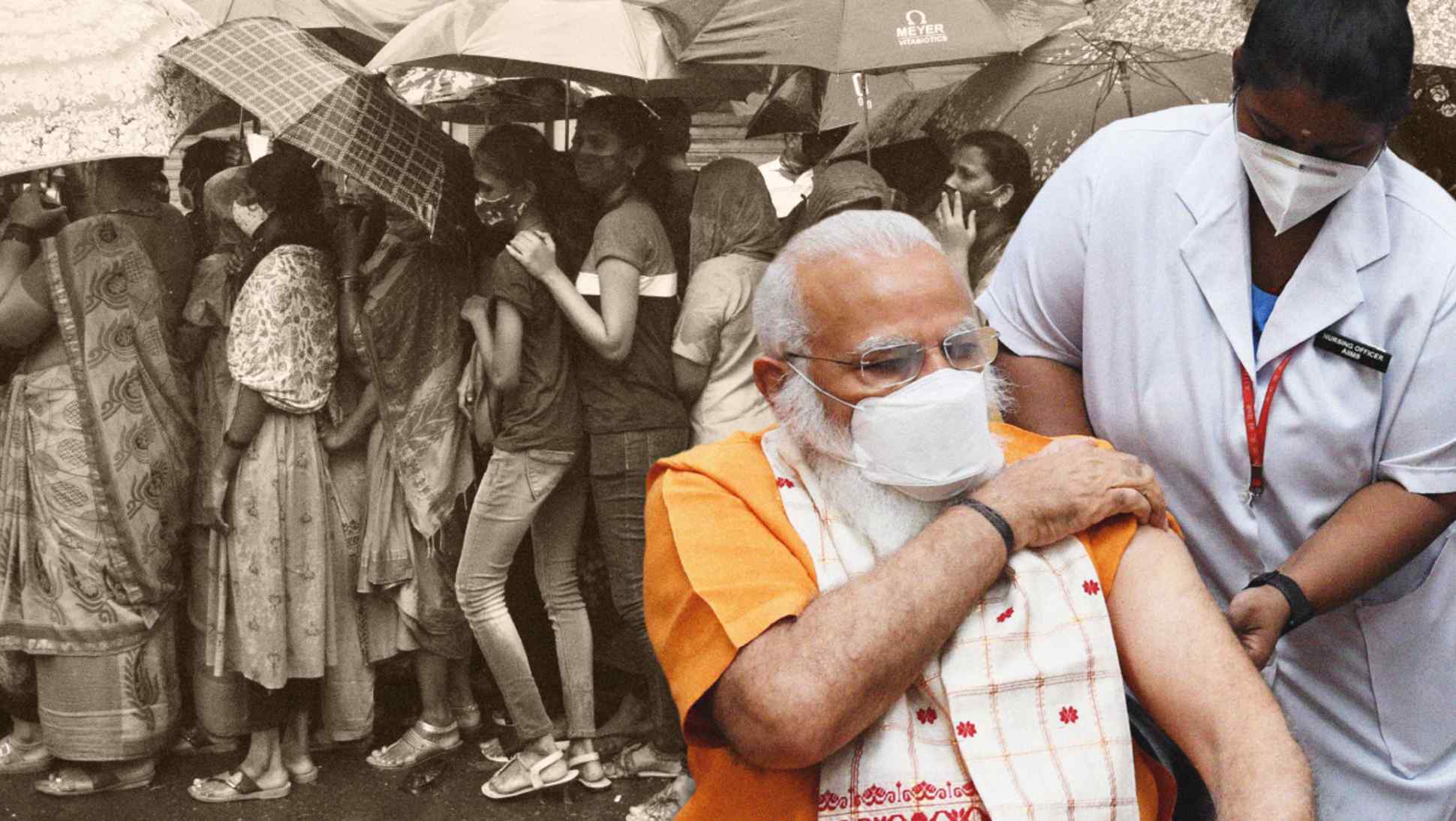 NEW DELHI -- India's COVID-19 vaccine exports have been at a standstill for three months so far -- with little prospect of their resumption anytime soon -- after a deadly second wave of the virus ravaged the South Asian nation of over 1.3 billion people in April and May.

Global supplies of made-in-India jabs were part of Prime Minister Narendra Modi's vaccine diplomacy for contesting regional and global influence with China. The disastrous resurgence of the pandemic has stalled not only New Delhi's diplomacy, but also the inoculation drives of importing countries in the Asia-Pacific and beyond.

"We have exported 60 million doses between January and the end of February, which is perhaps more than any other country," Adar Poonawalla, the chief executive of the Serum Institute of India (SII), the world's largest vaccine manufacturer by volume, told the India Global Forum on June 30. "Then the second wave in India hit us, and we had to focus all the firepower and the vaccines [on] the Indian population because that was where it was needed the most."

India is a vaccine powerhouse usually capable of pumping out about 60% of all global supplies. Before it halted exports in April, it had provided some 66.4 million doses of COVID-19 vaccines to over 90 countries, including Cambodia, Laos and Myanmar in Southeast Asia.

But the domestic pandemic has derailed the best-laid plans.

When India's daily COVID-19 cases soared alarmingly in April, domestic demand for vaccines also shot up. The upsurge was driven mainly by the delta variant which was first detected in the South Asian nation and has now spread to over 80 countries. At the height of its second wave in May, India was seeing more than 400,000 confirmed daily infections -- far higher than the 97,000 per day peak it experienced last September.

India's already rickety healthcare system was overwhelmed with patients gasping for scant oxygen. Crematoriums and burial sites struggled to accommodate bodies, and both local and federal governments were fiercely criticized for mishandling the crisis. 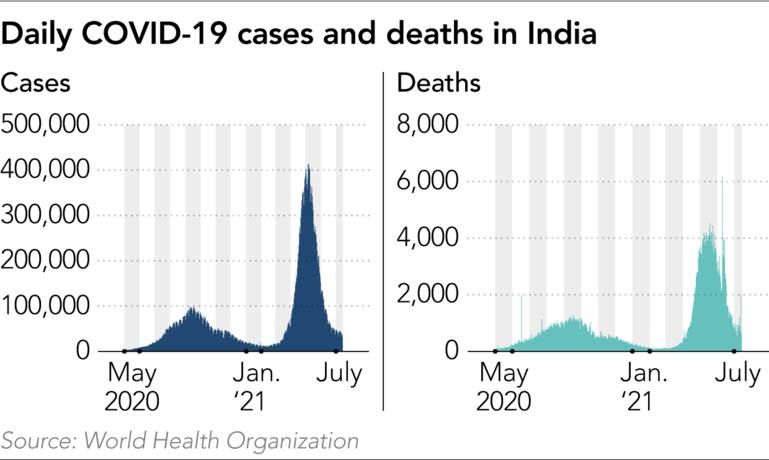 "We had taken advance funding, we had to return some of that funding, and really explain to other world leaders as well that there really is no choice at the moment, and we need to support our nation ... for a few months and we will get back to you," said Poonawalla. "It's clear that India eventually will go back to supporting COVAX ... and start re-exporting vaccines."

Supplies to other nations -- which began soon after India launched its own vaccination drive on Jan. 16 -- were sent as grants, gifts, commercial shipments or as part of India's commitments under the World Health Organization-backed COVAX program, which aims to ensure equitable global vaccine distribution.

Most doses originated from Pune-based SII, which makes the Oxford-AstraZeneca COVID-19 vaccine under the local label of Covishield. India normally supplies around 60% of the world's vaccines, but had to halt COVID-19 vaccine exports to ramp up an ambitious domestic inoculation program.   © Reuters

As India battled the second wave at home, the Modi government set an ambitious target of fully vaccinating all of India's adult population of over 940 million by the year's end. That meant diverting doses into the national drive.

The health crisis has abated in recent weeks. "Our current focus continues to be on purposing domestic production towards India's domestic vaccination program," foreign ministry spokesperson Arindam Bagchi told reporters on July 8. "We are also actively pursuing the enhancement of vaccine availability through imports."

When Indian supplies stopped, countries such as Bangladesh, Nepal and Sri Lanka started looking to Russia and China to fill the gap. Moscow and Beijing also began offering more doses, including to Southeast Asia. Nepal began its inoculation drive on Jan. 27 using Covishield, according to Kathmandu-based journalist Ramesh Pokhrel, who has himself received both doses of vaccine from India.

Initial deliveries from India to Nepal were prompt. It received one million doses as a grant in January, and purchased another million directly from SII a month later. "The buying process was halted due to the temporary ban [by] India on exports of vaccine," Pokhrel told Nikkei Asia.

China's Sinopharm vaccine -- branded as Vero Cell -- and Russia's Sputnik V are among the other vaccines approved for emergency use in Nepal. Talks are ongoing with other manufacturers, mainly in China and the U.S.

Meanwhile, cooperation in the fight against COVID-19 was discussed by Modi during a telephone conversation with his Vietnamese counterpart, Pham Minh Chinh, on July 10.

Vietnam has been criticized for its slowness acquiring vaccines and heavy dependence on COVAX, which was set back by the turn of events in India. Hanoi has reportedly sought New Delhi's assistance in accessing and manufacturing vaccines. The country started its vaccination drive on March 8, and had administered about 4.28 million doses as of July 19. Only about 306,475 people have received both shots.

The Vietnamese government says it has placed orders with AstraZeneca, Moderna, Pfizer and also with Russia for at least 120 million doses this year, and aims to inoculate at least 70% of its 96 million people to achieve herd immunity by April 2022.

The task is made harder in Vietnam by the fact that no vaccine maker is prepared to commit firmly to delivering doses on time. This inhibits the step up from 90,000 inoculations being made daily at present to the 500,000 needed. Vaccine hesitancy may also prove a retarding factor. Vietnam has so far received about 4.39 million doses of AstraZeneca vaccine through its importer, the Vietnam Vaccine Company, and COVAX. Another three million doses of the same vaccine arrived from Japan in June and July, and China gave 500,000 doses of Sinopharm's Vero Cell in June, mainly for its nationals there.

Experts feel that relying so heavily on a single country for vaccine supplies was imprudent. Many countries were also slow to place their orders, while others, such as the U.S. and Canada, pre-ordered three or four times more doses than their populations.

"These countries should come forward and help the developing and poor nations as they have extra jabs with them," said Rajinder K. Dhamija, head of neurology at Lady Hardinge Medical College in New Delhi. The need to inoculate the vulnerable population in India became far more intense when the second wave left hundreds of thousands of people dead, he said.

As of July 19, India had reported 31.14 million cases with 414,108 fatalities, and administered about 406.5 million vaccine doses, mostly the first of two required.

Pankaj Jha, a professor of strategic affairs at O.P. Jindal Global University, said that for now India can be "a contributor to supplies of the vaccines but cannot be the dominator."

India has 300-odd vaccine companies, which can scale up production "in a jiffy," but that cannot happen until it is allowed to manufacture several vaccines that the U.S. and others in the West have developed, he said. "Support from the international community is also critical if they want India to meet the demand of the world."

From just 10 million doses in April, Bharat Biotech is planning capacity of 60 to 70 million doses per month this month or next, and nearly 100 million by September. 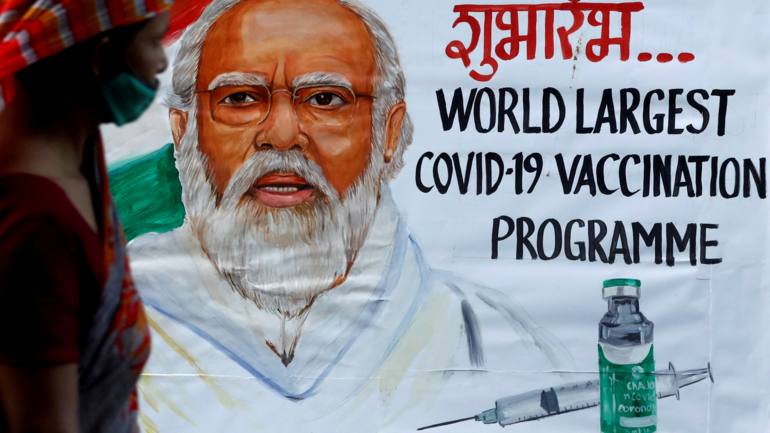 Prime Minister Narendra Modi is keen to associate himself with India's massive vaccination drive against COVID-19 after mistakenly believing earlier in the year that the virus was in retreat.    © Reuters

India has given emergency use approval to Russia's Sputnik V, which SII will start producing in September; and to Moderna from the U.S.

The government is also banking on a number of other vaccines being developed domestically. Among them, the Hyderabad-based Biological E's vaccine, which is likely to be available from September. The government has already ordered 300 million doses.

Biological E is due to make 1 billion doses of COVID-19 vaccines, including one developed by Johnson & Johnson, by 2022 for countries in the Indo-Pacific region. This effort is part of the vaccine partnership announced in March by the Quad grouping that comprises Australia, India, Japan and the U.S.

The U.S. is confident of India's manufacturing capability, and that it will be able to meet the Quad target despite the doubts that surfaced with the South Asian nation's monstrous second wave.

"Our discussions with both our partners in the private sector and also in government suggest that we are -- knock on wood -- still on track for 2022," Kurt Campbell, White House Coordinator for the Indo-Pacific, told the Center for a New American Security on June 9. He had been asked online whether the Quad's plan could be interrupted because of the crisis in India.

"I think we're feeling relatively confident as we head in to 2022," he said, pointing out the world is facing new strains of the virus that spread rapidly. "I think we understand the only way to be effective -- to counter this -- is through vaccine diplomacy [and] we're trying to step that up more generally."

Harsh V. Pant, the head of strategic studies at the New Delhi-based Observer Research foundation, told Nikkei that although India's setbacks have provided an opportunity for Russia and China to "chip in," the two interlopers have gained limited traction.

"There is a strong issue with the quality of the Chinese vaccines, while Russia, whose vaccines have been relatively okay, can't really match the scale which would be needed," Pant said.

The Quad countries are meanwhile poised to generate better results. "America is certainly in that position, given that it has vaccinated most of its population and it has the capacity to generate vaccines," he said.