India's Modi on dangerous ground with big giveaways to farmers

NEW DELHI -- Their numbers attested to their desperation: Tens of thousands of Indian farmers streamed into Mumbai on March 12.

They had walked for six days, braving blisters and blazing heat to cover the 180km from the city of Nashik to the country's financial hub. They came to demand unconditional, complete loan waivers from the state of Maharashtra and higher prices for their produce. More than 90% were landless tribal farmers who wanted rights to the forest plots they and their forebears had been tilling for generations.

Prime Minister Narendra Modi and his government are well-aware of the hardships growers face, and intend to launch a relief effort this year. Yet the plan has sparked a political backlash. Some say it will exacerbate inflation, and perhaps even lead to more inequality.

About half of India's workforce toils in agriculture, but the sector contributes only around 15% of gross domestic product. Farmers are heavily dependent on the monsoon season, keeping productivity and profits low. Many end up deep in debt.

"We don't have any other means of livelihood and want the government to support us in every way possible," one young protester said on a TV news report.

A middle-aged woman, showing her swollen feet, said, "We've been walking barefoot for several days to press for our demands." She said she could not afford to educate her children and accused the government of turning a blind eye to farmers' plight. "Many of our brothers and sisters are forced to kill themselves," she said. Farmers demand support from the government at a rally in Mumbai on March 12.   © Reuters

It is true that farmers who are unable to repay debts and feed their families often resort to suicide. Statistics from the National Crime Records Bureau show that 12,602 people in the farming sector killed themselves in 2015, up 2% from 2014 and 7% from 2013.

Maharashtra, home to both Nashik and Mumbai, is ruled by Modi's Bharatiya Janata Party and logs the most suicides by farmers. Last June, the state announced a historic farm loan waiver worth 340 billion rupees ($5.22 billion), but many protesters said they have not received any benefit.

"I took out a loan of 300,000 rupees, which I'm unable to repay [due to crop failure]," said another participant in the protest, which was led by a national farmers organization affiliated with the Communist Party of India (Marxist). "I applied for a loan waiver several months ago but the authorities have not acted so far." 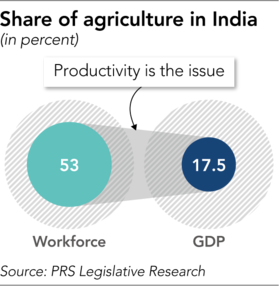 In February, Modi's government laid out a plan to improve the situation.

Finance Minister Arun Jaitley presented the national budget for the fiscal year starting in April with a pledge to spend more on strengthening agriculture and the rural economy. He said the government would pour 14.34 trillion rupees into rural livelihoods and infrastructure. He also announced that the government would offer farmers a minimum support price, or MSP, for their crops that would be at least 1.5 times the cost of production.

"I am confident that this historic decision will prove an important step toward doubling the income of our farmers [by 2022]," he said, referring to a key Modi goal.

The opposition was quick to push back, seeing the plan as a populist attempt to woo voters ahead of the general elections expected before mid-2019. The Indian National Congress party expressed its displeasure over the MSP and other budget proposals.

Congress President Rahul Gandhi took to Twitter to lament that, after four years in power, the government was still only promising farmers a fair price. "4 years gone; FANCY SCHEMES, with NO matching budgets," Gandhi wrote. "4 years gone; no JOBS for our YOUTH. Thankfully, only 1 more year to go."

If you don't address the agriculture and issues related to it more judiciously and effectively, then it has the potential to completely destabilize the economy

The budget has already been approved by the lower house of parliament.

Some see a fairness problem. The MSP is a government-fixed benchmark designed to protect farmers from a sharp fall in prices due to a bumper crop. Each year, the government sets minimums for around two dozen agricultural products before their sowing seasons, including grains like wheat and rice, pulses and sugar cane.

"While the government procures wheat and rice from farmers [at the MSP], there is no mechanism in place to ensure that farmers get the MSP for other crops [procured privately]," said Sandip Das, a senior consultant at the Indian Council for Research on International Economic Relations. "The main issue here is not the MSP, but procurement."

The government buys rice and wheat from farmers at the MSP, which is usually higher than the market price, and then sells the grains at a heavily subsidized price to the country's hundreds of millions of poor citizens. The system tends to favor farmers in states with a surplus of grains, like Punjab and Haryana, versus those cultivating other crops.

In addition to inequality, there are fears of acute inflation. After the budget announcement, the big question was how the government would set the new MSP. In particular, how would it calculate farmers' costs? It was only in late March -- nearly two months later -- that Modi offered an explanation in a radio address.

Modi sought to avoid disruptive changes in cost calculations that "would have been significantly inflationary," Japanese brokerage Nomura said in a note issued on March 27. Nomura also said accusations of populism appeared unfounded, at least when it comes to the support price.

However, the brokerage did say the MSP will double for the upcoming summer crop, posing "an upside risk to inflation."

The government is to announce its final decision on the pricing in May or June.

The central bank, which will hold a policy meeting on Wednesday and Thursday, is already in a tough spot. In its bimonthly monetary policy report for February, the Reserve Bank of India said it cannot yet assess the true impact of the MSP announcement on inflation.

"As more information comes through on exactly which crops are going to be supported to what extent, then we would have a better idea on the impact," RBI Gov. Urjit Patel told reporters on Feb. 7. The RBI has said nothing about the MSP since.

Sunil Kumar Sinha, principal economist at Fitch Group company India Ratings and Research, believes the MSP measure is sure to cause an inflation flare-up -- possibly beyond the RBI's expectations.

"If the wholesale prices move up because of the minimum support prices, the retail prices will increase too," said Sinha. "That simply will add to inflation, which will become more generalized later."

Sinha issued a stark warning: "If you don't address the agriculture and issues related to it more judiciously and effectively, it has the potential to completely destabilize the economy."

High inflation poses a challenge for any country, but it stings India more than just about any other major nation. This is partly because of India's high poverty rate of over 20%, as rising prices hurt the poor the most. The RBI could be forced to raise interest rates to tamp down inflation. But this would come at the expense of growth, since tightening liquidity hurts businesses and, in India's case, the many small farms that need loans.

Sinha said rises in food prices would quickly spread to other sectors, prompting workers in a range of industries to demand higher wages. "We have seen it in the recent past ... it happened just four or five years ago."

The RBI, Sinha suggested, will want to be proactive and start raising its policy rate before inflation spreads. But the government is likely to balk at a rate hike even as it creates upward pressure on prices.

When ministers from World Trade Organization countries gathered in New Delhi on March 19-20 for an informal meeting, the key issue was how to counter the rising protectionism brought on by U.S. President Donald Trump. It was not the only issue, though. "Food security concerns and items related to agriculture were discussed [at the New Delhi meeting] and were strongly put forward by countries," Suresh Prabhu, India's commerce minister, said on March 20.

India has irked WTO members, most notably the U.S., in recent years. In 2014, shortly after Modi took power, his government abruptly refused to adopt a WTO Trade Facilitation Agreement reached the previous year. Modi wanted a concession on public stockpiling of agricultural products, to ensure it can maintain its food security program.

Modi won the fight: Now, WTO members cannot take legal action against India over its food security program until a "permanent solution" is found. But the dispute, which occurred two years before Trump was elected, clearly contributed to American frustration with the WTO.

U.S. trade representatives have since called for giving up on the Doha Round of free trade talks and moving to a new negotiating framework. The U.S. is also blocking the appointment of Appellate Body members -- the equivalent of supreme court judges for global trade.

While India showed a willingness to play ball on free trade by hosting the WTO gathering in March, the meeting ended without any significant progress.

Putting aside international criticism, experts say the Modi government will have its hands full with its promise to double farmers' income.

Sinha of India Ratings and Research noted that growth in the agricultural sector over the past 30 to 35 years averaged about 2.7% annually. "If you want to double the income of farmers in five years, it should be a little more than 10% [annually], which rarely happens in the Indian context."

Crop prices have barely budged for years, while farming equipment and other input costs have more than doubled in the past two decades. "Around 20 years back," Das said, "one could buy potatoes for 6 rupees per kilogram. Today it [still] costs only 10 rupees."