Indian Prime Minister Narendra Modi's move to fast-track naturalization for non-Muslim refugees has sparked months of protests at a time when the economy is sputtering.    © Nikkei montage/Source photos by Reuters
Asia Insight

NEW DELHI -- Besides the usual stress of life as a student in India's frenetic capital, Rimsha Parveen is haunted by anxiety over something far more personal: her citizenship status.

The 22-year-old Muslim said she feels "highly insecure" about her future in the country and wants Prime Minister Narendra Modi to roll back measures she considers discriminatory against people of her faith.

She is far from alone in her discontent.

Less than a year after Modi's triumphant reelection, the country is grappling with not only a bleak economic outlook but also the fundamental question of what, exactly, it means to be Indian.

Thousands have taken to the streets since December to protest a Citizenship Amendment Act (CAA) that fast-tracks naturalization for Hindus, Christians, Sikhs and three other religious communities -- but not Muslims -- who fled persecution in neighboring countries. 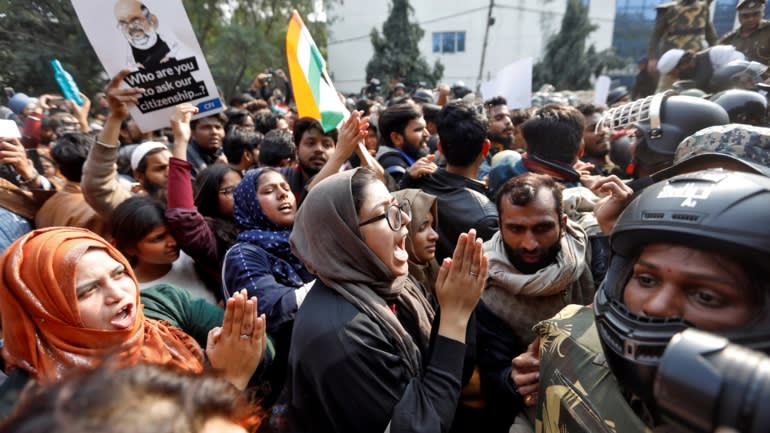 A protest against the citizenship act on Feb. 10: Critics of the law fear it is a prelude to stifling measures against minority Muslims.   © Reuters

Furious Muslims have been joined by allies from other religions who accuse Modi and his Hindu nationalist Bharatiya Janata Party of sowing division for political gain. Some suspect the government wants to distract the public from the economic malaise.

Gross domestic product is expected to grow 5% for the year through March, an 11-year low, while unemployment has reached a 45-year high. The inflation rate hit 7.59% in January, up from 2.05% a year earlier, with consumers straining to pay for pricier vegetables and other food.

The government did try to address some of these problems by including major investments in agriculture, water and infrastructure in its annual budget presented on Feb. 1. But skepticism runs deep.

"The economy is going nowhere so [the government] just wants to divert attention from the real issues," said a New Delhi-based public relations professional on condition of anonymity. "By leaving out one community from the CAA it is trying to convey a political message that it wants to strengthen its vote bank among non-Muslims."

Ritu Kaushik, a 40-year-old Hindu who has joined the ongoing protests, suggested the BJP has focused on citizenship and illegal immigration "because it has nothing good to offer people."

Kaushik belongs to an upper caste Hindu community, considered part of the base for Modi's party. But she said, "There shouldn't be division and hate in the country on the basis of religion."

As the demonstrations drag on and sometimes erupt in clashes between protesters and police -- nearly 30 people have reportedly died and several hundred have been arrested -- Modi and the BJP are paying a certain price politically. 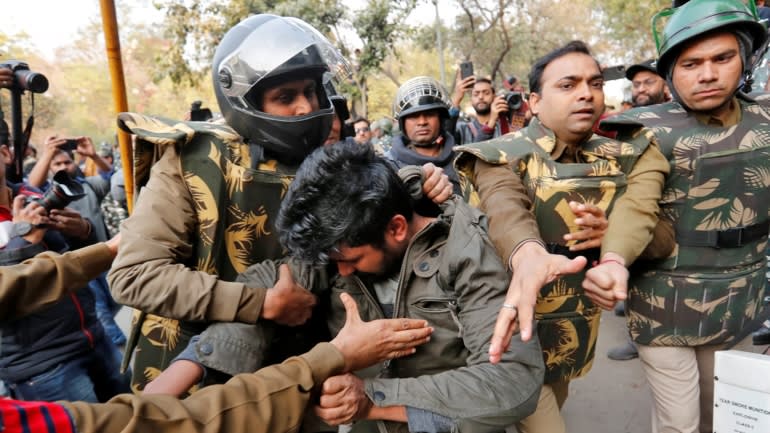 Since winning the general election last May, the BJP has suffered repeated setbacks at the state level. It failed to retain power in the state of Maharashtra in October and lost again in Jharkhand in December.

Then came the Delhi debacle.

In the capital's local elections on Feb. 8, the BJP aimed to retake control of the city after a 20-year hiatus. The party had swept all seven of Delhi's parliamentary seats in the general election, raising its hopes. But this time, its strategy of tugging at the threads of a frayed social fabric did not pay off.

In the local campaign, the BJP railed against the citizenship act protesters and fanned nationalist sentiment. One big talking point was the government's move to scrap the semi-autonomous status of Muslim-majority Jammu and Kashmir -- long the focus of a territorial dispute with Pakistan.

Meanwhile, Delhi's incumbent Aam Aadmi Party emphasized development, education and health care. The result? The BJP won only eight of the 70 seats up for grabs.

And yet, even as local voters punish the BJP, there seems to be no match for Modi on the national stage.

Anshoya Sati, a private sector employee who voted for the AAP in Delhi, said he voted for Modi in the last general election and would do it again. "Modi is a strong leader for our country, and the whole world knows him," Sati said.

Like Sati, at least 10 other voters the Nikkei Asian Review spoke with said they split their local and national votes in a similar way. 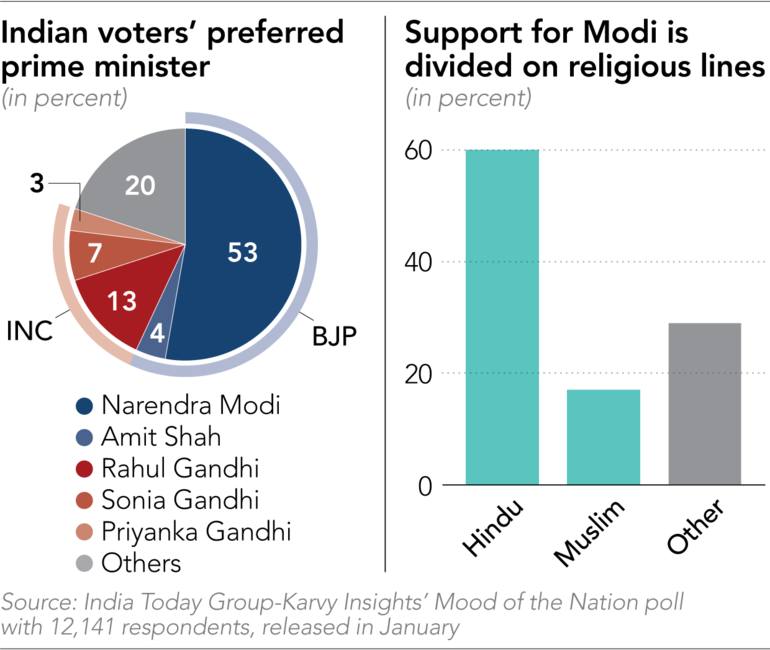 "No other party has been able to pose a challenge to Modi's leadership and thus the voter has no option but to go for the BJP [at the national level]," Bareth explained. So despite the local setbacks, he expects the BJP will stick to its brand of nationalism, counting on it to work in future general elections.

Critics of the citizenship act are convinced the legislation is merely a precursor to stifling measures against minority Muslims, who make up around 15% of the population of 1.3 billion.

The government "could also go for a pan-India National Register of Citizens in the future," said Parveen, who is pursuing a master's degree in Islamic studies at New Delhi's Jamia Millia Islamia University -- a seedbed for the protests.

Such a registry already exists in the northeastern border state of Assam, where illegal immigration from Bangladesh has long been a concern. There, nearly 2 million people -- many of them Muslim -- were excluded from a list of citizens last August after failing to prove their ancestry, raising concerns they could be rendered stateless and detained.

There is real fear that the citizenship act -- which marks the first time religion has become a criterion for belonging -- paves the way for taking the so-called NRC nationwide.

Some opposition-ruled states, including West Bengal and Kerala, have passed resolutions against the CAA in their assemblies. Scores of petitions have been filed with the Supreme Court, challenging the new law as a violation of the constitution's guarantee of equality for all.

"We want the CAA to be rolled back and plans to implement the NRC nationwide shelved," said Parveen, who resides in Delhi's Shaheen Bagh area, where hundreds of women have made these demands at round-the-clock sit-ins over the past two months.

"It's better to agitate now to demand our rights than be thrown into detention centers later," Parveen said. "The BJP is playing dirty politics by trying to divide people on the basis of religion, instead of tackling rising inflation and issues relating to health care, education and growing unemployment."

The government itself has sent mixed messages about the prospect of a nationwide citizenship registry. With the protests showing no signs of abating, Nityanand Rai, the junior home minister, stressed in parliament on Feb. 4 that the government has "not taken any decision to prepare [a] national register of Indian citizens at the national level." This contradicted Home Minister Amit Shah's remarks last year about plans to do exactly that.

Modi, too, has distanced himself from Shah's stance. At a rally in December, he insisted there had been no discussions of a nationwide registry since he became prime minister in 2014.

"Lies are being spread by opposition parties about the NRC," Modi said. As for the CAA, he said Indian citizens need not worry about it since it does not apply to them.

Rai's remarks to parliament, however, touched on another sensitive project -- updates to a separate population register that began under the previous Indian National Congress government in 2010. This will contain details on residents, though Rai was careful to note that "no document is to be collected during the exercise" and that "no verification is done to find individuals whose citizenship is doubtful."

Even if Modi's government can withstand the political and economic pressure -- and it looks like it can -- some critics worry about what the debate is doing to India's national character and international image. A protest on Jan. 30: Some claim the government is stirring social division to distract from economic problems.    © Reuters

Prominent opposition figures express alarm over what they see as Modi's attempt to build a Hindu nation.

Secularism is a fundamental principle of modern democracy, senior Congress party leader and former Finance Minister P. Chidambaram argued on Feb. 5 at a book release function. "That secularism is under challenge to a point where citizenship has become an object of attack," he said.

On the international front, Shamshad Ahmad Khan, a visiting associate fellow at the Institute of Chinese Studies in New Delhi, warned there is much more at stake than Modi's reputation.

"Not only the Indian PM's image, but also India's image as a whole has suffered following the inept handling of the anti-CAA and NRC protests by the government," Khan said. "The foreign media is taking a keen interest in these protests and [also] the use of disproportionate force by law enforcement agencies in the name of maintaining law and order."

This, he said, tarnishes "the image of a tolerant and democratic India."