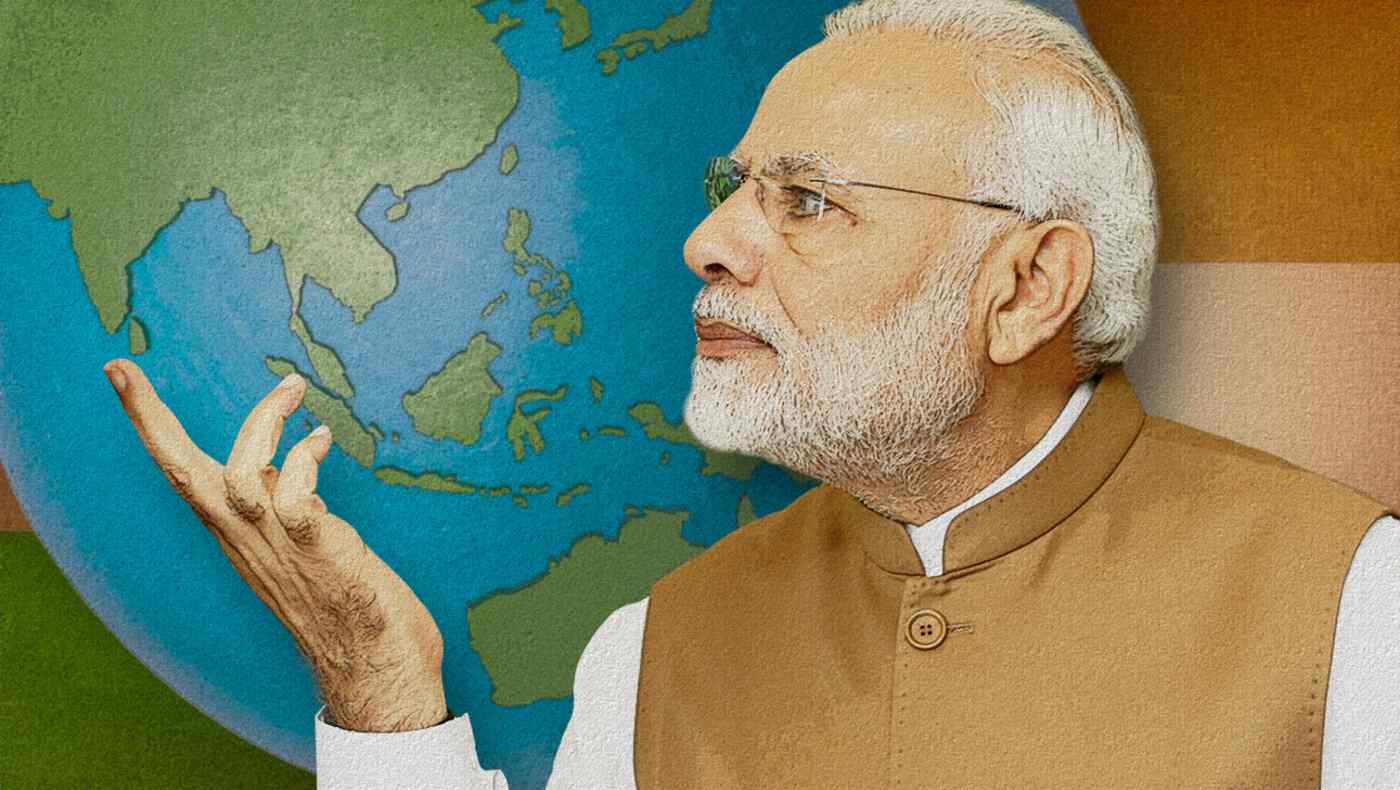 NEW DELHI -- Indian Prime Minister Narendra Modi's diplomatic strategy has been clear from the outset of his term: deepen ties with the U.S. and Japan while openly showing suspicion of China.

The game plan has changed.

Military watchers were surprised earlier this month when the Chinese People's Liberation Army sent a 10-member, high-level delegation to New Delhi. The officials went for talks "to promote strategic trust and mutually beneficial cooperation between the two militaries," according to Luo Zhaohui, China's ambassador to India.

Only a year ago, the neighbors appeared to come closer to war than at any point in the last half-century. Chinese and Indian soldiers stood eyeball to eyeball for two and a half months in the border area of Doklam, where the two countries and Bhutan intersect.

Now, senior PLA officers visit the capital of a state Beijing used to regard as an enemy. How did the relationship warm up so quickly, at least on the surface? 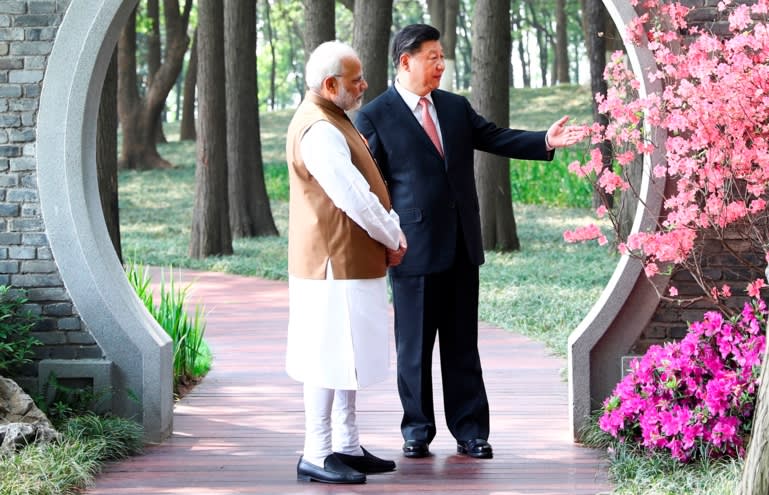 Modi and Chinese President Xi Jinping walk in a garden in Wuhan on April 28 -- a meeting that appears to have been a turning point for bilateral ties.   © Xinhua via AP

The thaw began in earnest in the morning of April 28. Modi and Chinese President Xi Jinping took a quiet lakeside walk in the Chinese city of Wuhan. "[I] came to know about the PLA's Doklam buildup very late," Xi told Modi, according to sources from both governments. The Chinese military had been constructing a road near the border, which prompted the standoff.

The two leaders agreed that another Doklam-like situation would be "avoided at all costs." They also discussed a sort of nonaggression pact, with Xi quoted as saying, "Indian interests in its neighborhood will not be challenged by China, including [the] Arabian Sea and the Bay of Bengal."

The world began to grasp the significance of the shift on June 1, when the Asia Security Summit rolled around. "Asia and the world will have a better future when India and China work together in trust and confidence, sensitive to each other's interests," Modi said in a keynote speech at the meeting in Singapore, also known as the Shangri-La Dialogue.

Many in the audience were bewildered by what sounded like an abrupt change to India's foreign policy.

The remark also struck a nerve among the hundreds of American, European and Asian defense experts in attendance, many of whom take a dim view of Beijing's construction and militarization of man-made islands in the South China Sea. Some took Modi's statement as a defense of China's assertive territorial approach.

This jars with what was thought to be the primary concern of the Quadrilateral Security Dialogue, a strategic forum set up last November by the U.S., Japan, India and Australia. Though the grouping was seen as a thinly veiled effort to build a united front against China, the fragility of the foursome's bond has become apparent.

"The Quadrilateral format of USA-Japan-India-Australia is one of the many multilateral dialogues in the region, and [is] not directed to any country," Pankaj Saran, India's ambassador to Moscow, told Russia's Itar-Tass news agency after Modi's Shangri-La speech.

The annual Malabar Naval Exercise, held off Guam in mid-June, underscored the divisions within the Quad. A U.S. aircraft carrier, Indian stealth corvettes and a Japanese helicopter carrier took part, but Australia sent no vessels because India opposed its participation.

The Indian government's recent stance "is raising apprehensions [about] whether New Delhi was doling out concessions to accommodate Beijing's concerns," said Prateek Joshi, research associate at the Vivekananda International Foundation, a think tank in New Delhi.

At least, Modi appears to be returning his diplomatic posture to neutral. This is in line with India's traditional stance dating back to Jawaharlal Nehru, the first Indian prime minister. At the Bandung Conference in Indonesia in 1955, Nehru called for countries to refrain from siding with the U.S. or the Soviet Union and urged them to adopt a policy of nonalignment instead.

But there is more to Modi's strategy than maintaining equal distance from two global powers. He seems to want India to be an active participant in both the U.S.- and China-led camps.

"What is new about [Modi's recent diplomatic approach] is inclusiveness," said Srikanth Kondapalli, a professor at Jawaharlal Nehru University. He said it means "India is willing to accept the Chinese role in the Indo-Pacific."

Modi's "inclusiveness" extends not only to the U.S. and China but also to Southeast Asian countries. He is treating them as partners in shaping the Indo-Pacific order.

At the end of May, before his Shangri-La address, Modi met with Indonesian President Joko Widodo in Jakarta and declared that India would upgrade the status of the countries' relationship to a "comprehensive strategic partnership." This is similar to the level accorded to India-U.S. ties.

Modi and Widodo also agreed that their countries should engage in "regular bilateral dialogue and consultation on strategic defense and military issues." Modi and Xi agree to boost communication between their militaries

India and China should work together for Asia's future: Modi

The courtship of Southeast Asia's largest economy raised some questions about Modi's plans.

"India probably has no intention of inviting other countries to the Quad," a diplomat from one member of the strategic dialogue said. Even so, "India may be trying to create a new security framework in the Indo-Pacific region with Southeast Asian nations, in order not to leave the issue only to big powers."

The diplomat added that "a partnership of India, Indonesia and Vietnam is an option."

To summarize Modi's audacious balancing act: He is participating in Western efforts to check Chinese power, while agreeing with Xi on the need to avoid stepping on each other's toes. At the same time, he is keen to establish Southeast Asia as a third countervailing force. And he wants to keep India at an equal, close distance from all three camps.

But this carefully crafted strategy could easily falter if India is perceived to be leaning more toward any one of the three.

Who was the architect of these risky tactics? "Most probably [the strategy] was made by Modi himself," said a foreign policy expert in New Delhi.

Foreign secretaries appear to have had a hand in it as well, the expert said. The previous secretary, Subrahmanyam Jaishankar, is believed to have made the case that moving closer to the U.S. was in India's interest. But Jaishankar retired in January and was succeeded by Vijay Gokhale, a former ambassador to Beijing.

Modi is said to have pushed for Gokhale's appointment. With trade friction between Washington and Beijing heating up, many in India felt the need to brace for U.S. President Donald Trump's unpredictability. To do that, the expert said, Modi likely decided to change his diplomatic formula and mend relations with China.

The prime minister has shown a preference for top-down decisions on other matters, too. He was behind the government's overnight invalidation of nearly 90% of the bank notes in circulation in 2016. He shared the plan with only the finance secretary and five or six others, according to a government source.

Although the sudden demonetization did not achieve its intended purpose of prompting Indians to disclose hidden wealth, the policy tapped into broad public resentment of the affluent. So, politically, it was a big success.

"People think [Modi is] able to conquer the world, and big leaders of the world cannot dare to ignore him"

Sanjay Kumar, director at the Center for the Study of Developing Societies

Modi, who makes little secret of his ambition to leave a legacy greater than Nehru's, seems to see diplomacy as another way to win hearts and minds.

"In America, England, France and Germany, India is being praised. What is the reason? No! Modi is not the reason. You people are the reason," the prime minister said while stumping for local elections.

"In the eyes of the common voters, it is seen as Modi has been able to put India on the world map," observed Sanjay Kumar, director at the Center for the Study of Developing Societies. "People think he [is] able to conquer the world, and big leaders of the world cannot dare to ignore him."

Yet, the prime minister is gambling with a protean diplomatic strategy that features simultaneous, deep involvement with two antagonistic powers. And there is no guarantee that cooperation with Southeast Asia will produce a sufficiently powerful third pole.

As the new "Modi doctrine" begins to crystallize, India is gaining influence but also fueling apprehension across the region.