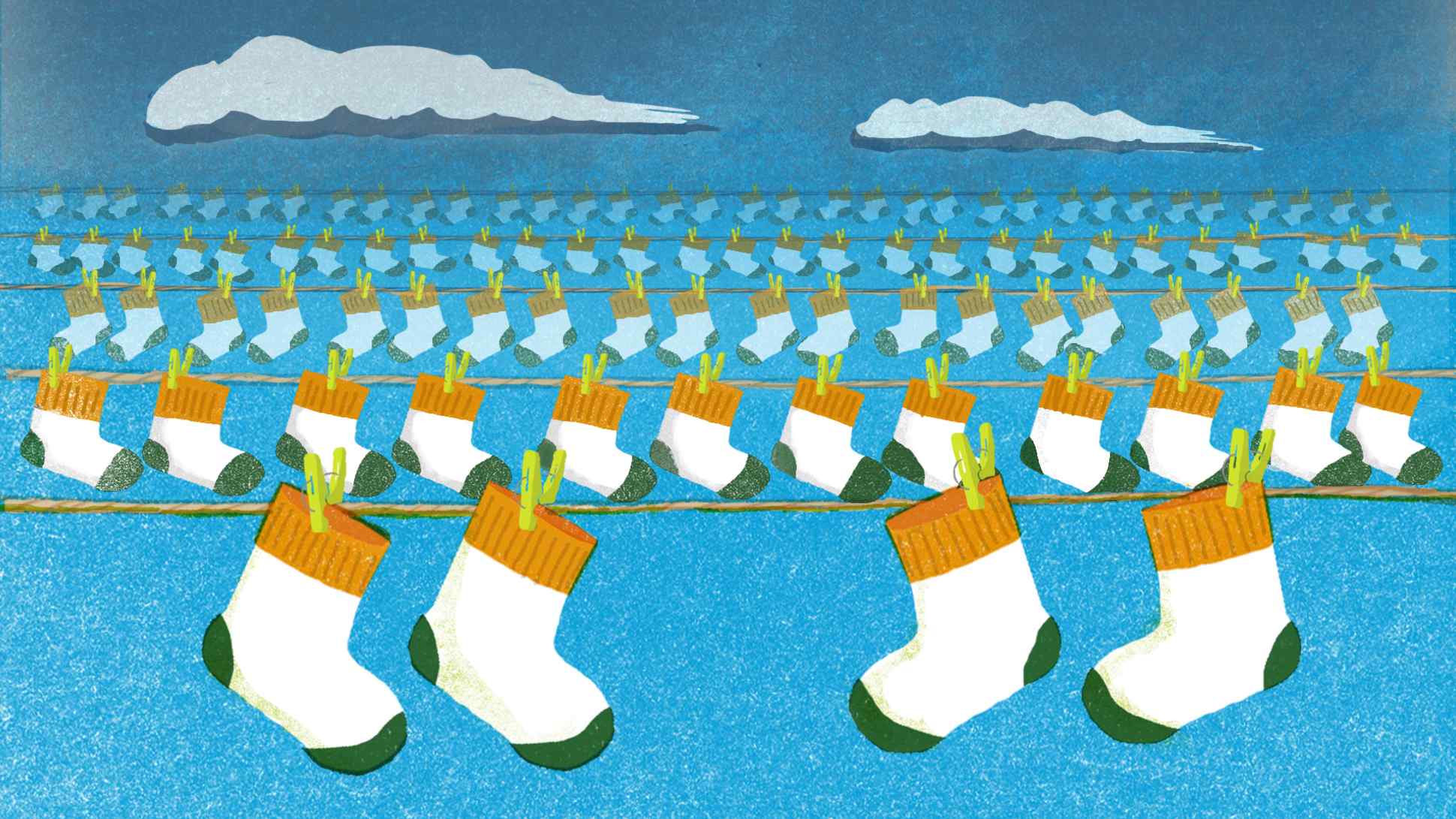 The rich fear demographic changes that could threaten the establishment

NEW DELHI -- A combination of rapid population expansion and technological change is threatening to stunt India's development and even tear its society apart -- at least according to growing circles of politicians and businesspeople who advocate strict controls on family size.

In those circles, there are fears that villages and urban slums will become hotbeds of overpopulation. This year, in particular, calls are mounting for the government to clamp down on births to address problems such as air pollution and youth unemployment.

For 40-year-old Geeta, who works as a domestic helper in the Indian capital, life as sole breadwinner in a family of nine daughters is full of struggles. Her husband, who worked as a contract laborer, died more than a year ago and since then the burden of raising the children has fallen on her.

Geeta, who goes by a single name and is among the poorest segment of society, is illiterate. She was married off when she was barely 18. She earns a meager 5,000 rupees ($70) a month or so, and none of her children, ranging in age from 8 to 20, support her financially.

"My eldest daughter got married two years ago. Another one dropped out of school in the ninth grade and is training to be a beautician. And the rest go to a government school which does not charge any fee," said Geeta. "I have a large family to feed and receive no pension or other support from the government," she added. The average family in the slum where Geeta lives has six members. Most couples strongly desire to have at least one boy because, traditionally, it is the eldest son who carries on the family name and looks after parents in their old age. Geeta shares this cultural preference and regrets not having a son.

According to United Nations estimates, India, with around 1.3 billion people, is the world's second most populous country, behind China, with 1.4 billion. It is expected to overtake its neighbor by around 2024. India's working-age population, in particular, is forecast to swell, rising by more than 200 million over the next two decades.

In countries around the world, growing numbers of people in their peak earning years have been a driving force for economies. This is known as a "demographic dividend." But as information technology and artificial intelligence transform industry and possibly reduce the demand for labor, the worry is that ever more young people will be left jobless.

Earlier this year, numerous petitions were filed with India's Supreme Court, calling on it to compel the government to formulate and enforce strict population control measures.

Pointing out that India has the youngest workforce in the world, with 65% of the population under 35, one petition said, "[A] population explosion is driving the youth towards ubiquitous unemployment," and warned that if this persists "it could lead to a civil war." It called for policies that reward those who adhere to a two-child rule and punish those who do not.

The court refused to intervene, calling the problem a policy matter rather than a legal one. People crowd aboard a train at a railway station in New Delhi.   © Reuters

In August, 125 members of Parliament wrote to President Ram Nath Kovind seeking a two-child policy and legal sanctions for those who do not follow it. Although more than 10 state governments have already introduced policies to discourage parents who have three or more children, the parliamentarians urged the national government to enact similar legislation.

Although the president's position as head of state is ceremonial and has virtually no weight in public policy, the letter is certain to put the lawmakers' push for a two-child law in the spotlight.

On Dec. 7, Sajjan Jindal, chairman and managing director of JSW Group, a steel, energy and infrastructure conglomerate, drew a strong reaction on Twitter when he tweeted: "Population can have both [a] positive or negative impact on economic development of any nation. If enough in strength, it is an asset; if excess in strength, it's a liability. Today the population in India is clearly a liability."

India's population growth, he added, puts a strain on the country's resources. "Simply put, overpopulation is a huge factor in resource shortage[s], environmental degradation, unemployment, poverty & disease. It's high time we do something about this issue."

But many analysts believe introducing a two-child policy will do little to solve the problem. "The only comparable example by scale is China, which conclusively shows that government policy is one of the least effective determinants in shaping [family planning] decisions," said Rajib Dasgupta, a professor at Jawaharlal Nehru University's Centre of Social Medicine and Community Health.

"India should not repeat China's mistakes," according to Steven Mosher, president of the U.S.-based Population Research Institute. "People are the ultimate resource, the one resource you cannot do without, as China is belatedly discovering after having eliminated 400 million [people] from their own now aging and dying population," Mosher said in a report on the Indian legislators pushing for a two-child policy.

Those opposed to the policy point out that India's fertility rate has already begun falling. According to the U.N., the country's total fertility rate, or the average number of children born to a woman between the ages of 15 and 49, fell from 2.80 for the period from 2005 to 2010, to 2.44 for the period between 2010 and 2015. It is forecast to drop below 2.0 by 2035, roughly replacement level, meaning the population will stabilize.

In southern states, where the economy is growing faster, such as Andhra Pradesh, Kerala, Karnataka and Telangana, fertility was below 2.0 in 2016. It was higher in larger states, such as Bihar (3.3) in the east and Uttar Pradesh (3.1) in the north. 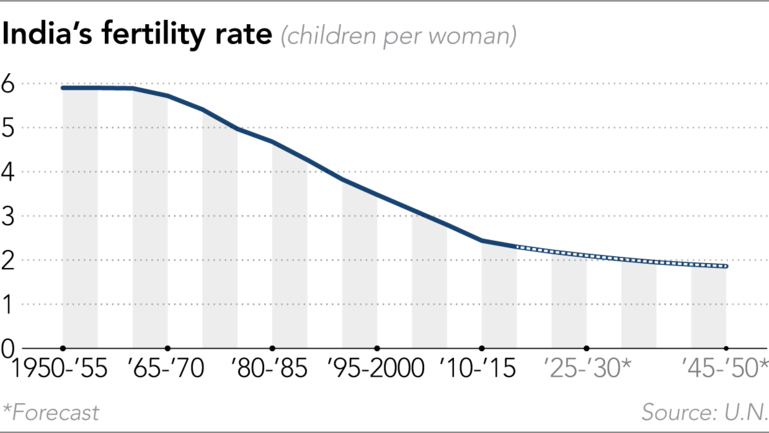 Given this decline, why are ruling party lawmakers pushing for laws to restrict childbirth?

At least part of the answer is fear of demographic changes that could threaten the establishment. The fertility rate among urban, middle-class women has fallen as India has grown richer. This has widened the income gap between relatively wealthy cities and towns, and villages still mired in poverty.

"Families living in poverty produce more children because, for them, it means more working hands. They want income," said Duru Arun Kumar, an associate professor of sociology at the Netaji Subhas Institute of Technology, or NSIT. Kumar pointed out that over half of India's population is part of "a very, very low" income group that includes farmers, laborers and contract workers.

Population control measures are also widely seen as indirectly targeting minority Muslims, who make up around 14% of Indians. According to the "National Family Health Survey 2015-16," the total fertility rate was 2.6 for Muslims for the country as a whole, versus 2.1 for Hindus. The rate for Muslims varied from 1.7 in Tamil Nadu to 4.1 in Bihar; for Hindus it ranged from 1.4 in Kerala to 3.3 in Bihar.

Some Hindus, including politicians from the ruling Hindu nationalist BJP, are concerned that the higher fertility rate among Muslims will alter India's religious makeup. In 2015, BJP parliamentarian Sakshi Maharaj called on every Hindu woman to produce "at least four children to protect the Hindu religion."

Earlier this year, Giriraj Singh, union minister of state and a BJP lawmaker, was quoted in local media as saying, "The growing population of the country, especially Muslims, is a threat to the social fabric, social harmony and development of the country."

Kumar of NSIT, however, argues religion is not a major factor in childbearing decisions. "When you are not economically strong, the sheer number [of children] gives you social security, and that goes for any low-income family, which could be Muslim, Dalits or lower caste Hindus, and other marginalized groups," she said, pointing out that Muslims in India's more developed regions have fewer children than those in poorer areas.

"There are some absolute differences among religions. ... So while these religion-based statistical differences remain, the regional and cultural factors also play an important role. Therefore, all this is very complexly intertwined and multifactorial, and it's not desirable that any one factor is picked," said Dasgupta of Jawaharlal Nehru University.

The two-child policy is unlikely to become a hot political topic in the run-up to general elections due by May 2019, in which Modi will seek another five-year term. On Aug. 10, Anupriya Patel, junior health and family welfare minister, stated in Parliament that the government did not plan to introduce such a policy or introduce legislation in this regard.

Ahead of next year's general elections, lawmakers in both the ruling and opposition parties have mostly been silent on population control measures because they are unpopular with rural voters. But the debate over the issue may heat up again after the election.

Analysts argue that effective population control will not happen through policies restricting family size. Apart from making contraception more widely available, they say it is important for the government to ensure 100% literacy and equal employment opportunities for all to solve the problem of having too many mouths to feed.